History has an alarming habit of repeating on the Korean peninsula. 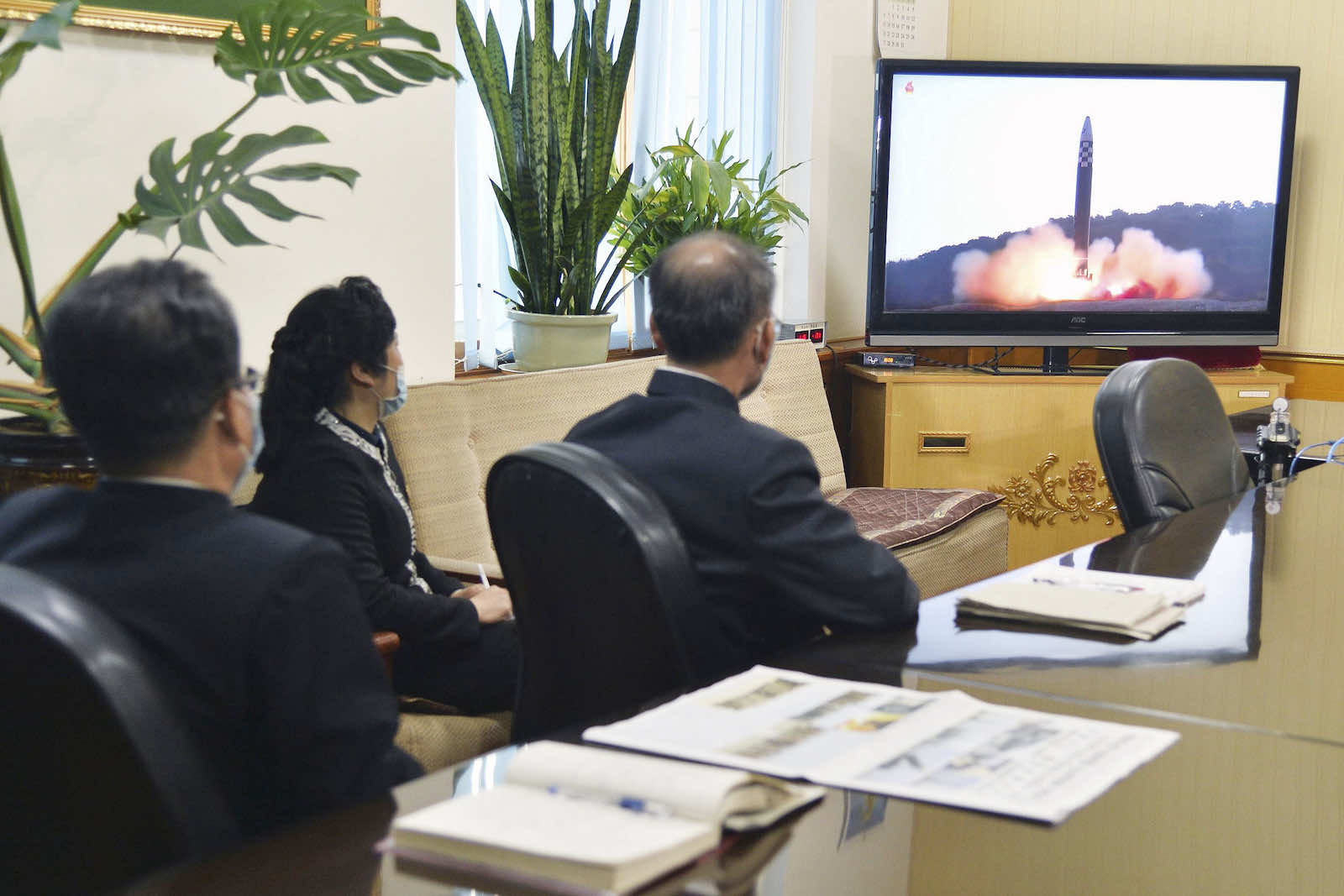 Some doubts linger over the precise details of the test, with South Korea and the United States believing that it was actually the Hwasong-15, an ICBM tested in 2017. Still, no matter the exact type of the missile, North Korea demonstrated progress with the latest launch as the missile flew higher and farther than before.

It was the first time since November 2017 that the North launched an ICBM after engaging in diplomacy with the United States and South Korea in 2018 and 2019.

There is little doubt point of the test was foremost intended to increase its military capabilities. The Hwasong-17 was first unveiled during a military parade in October 2020 and assessed to have a range of 15,000 kilometres. It is assumed to be able to carry multiple independently targetable re-entry vehicles. In short, pending confirmation of these capabilities, the tested missile provides more evidence that North Korean ICBMs can put all of continental United States within range.

Some argued that the North saw a window of opportunity to exploit, with the world’s attention otherwise focused on the war in Ukraine.

North Korean leader Kim Jong-un has made it a priority to upgrade the country’s nuclear arsenal to include solid-fuel ICBMs that can be launched from land and sea with mainland United States as the principal target. In the aftermath of Russia’s invasion of the non-nuclear armed Ukraine, North Korean high-ranking party cadres increasingly believed that the country needed to improve their nuclear weapons to defend against a foreign invasion, not to trade them away for economic aid.

However, the timing of the test shows that political calculations are in play, too. Some argued that the North saw a window of opportunity to exploit, with the world’s attention otherwise focused on the war in Ukraine. Others attribute the test to the power transition following elections in South Korea, as history showed that North Korea has done so before assuming South Korea could not respond firmly to such provocation. It could also be that North Korea expects a hawkish foreign policy from President-elect Yoon Suk-yeol.

North Korea has never abandoned its aims to undermine the US-South Korea alliance, either through a show of force or a show of peace. As I wrote in The Interpreter in April 2018 (“The peril of North Korea’s charm offensive”), North Korea’s strategy to decouple the United States and South Korea depends on the ideologies of South Korea’s presidents. If the president is a liberal with a pro-engagement policy, Pyongyang will adopt soft-decoupling. It wants to weaken the US-South Korea alliance by cooperating with the South and looking for a settlement that presages a US military withdrawal from the peninsula. As we have seen under the outgoing Moon Jae-in administration, despite the many “historic” summits and joint statements, North Korea stuck firmly to its goal – that the United States should withdraw its “hostile” policies, which includes the military presence in the South.

At other times, if the president is a conservative with a more hawkish North Korea policy, Pyongyang will switch to hard-decoupling. It will carry out more nuclear or missile tests to make the United States recalculate its extended deterrence to the South and to increase South Korea’s doubt about the US security guarantee. Will the United States trade New York for Seoul, for example?

These two strategies have a common logic of decoupling that sooner or later, North Korea will be able to improve its nuclear arsenal and long-range missiles to a degree that it can put unbearable pressure on the alliance and weaken it altogether. Such a desire explains why the North has not abandoned its nuclear weapons even when Kim and Moon proclaimed at the 2018 Panmunjom Summit that “there will be no more war and a new era of peace has begun on the Korean peninsula”.

So the timing of the ICBM test matters. North Korea did not shy away from provocations under Moon’s tenure, but it did comply with its self-imposed moratorium and the action it did take was calculated not to lead to strong condemnations from the United States and South Korea, foreclosing the diplomatic options. While the outcome of the South’s presidential election was unclear in the lead up to the polls, North Korea framed its long-range missile launches as reconnaissance satellite tests, although the technology is similar.

However, with Yoon’s victory, North Korea probably assesses that chances of engagement have significantly decreased. While Yoon said he would remain open for diplomacy, he conditioned the lifting of international sanctions, the revival of inter-Korean economic cooperation, and the signing of an end-of-war declaration would only come after North Korea has taken “substantial steps” towards disarmament. The fact that North Korea officially confirmed this latest test to be an ICBM demonstrates shows that Pyongyang no longer feels it needed to hold back to keep hopes of diplomacy alive. Whether the ICBM is Hwasong-17 or 15, the self-imposed moratorium is still broken.

Expecting North Korea’s hostility, Yoon has appointed several North Korea hawks from the former conservative Lee Myung-bak administration on his transition team, and he has said he wants to “rebuild” the US-South Korea alliance to better cope with the North. North Korea’s history of provocations during past conservative presidencies in the South indicate that the ICBM test is likely to be followed by further nuclear tests. Kim has already committed to developing “powerful strike means” to defend the country. South Korea’s Ministry of Unification has warned of “accidental clashes” along the inter-Korean border.

Conditions for another nuclear crisis on the peninsula are unfortunately ripe.