How to Interpret 2022: Russia invades Ukraine

Vladimir Putin seemed convinced Kyiv would fall in days. We look back at ten months of war. 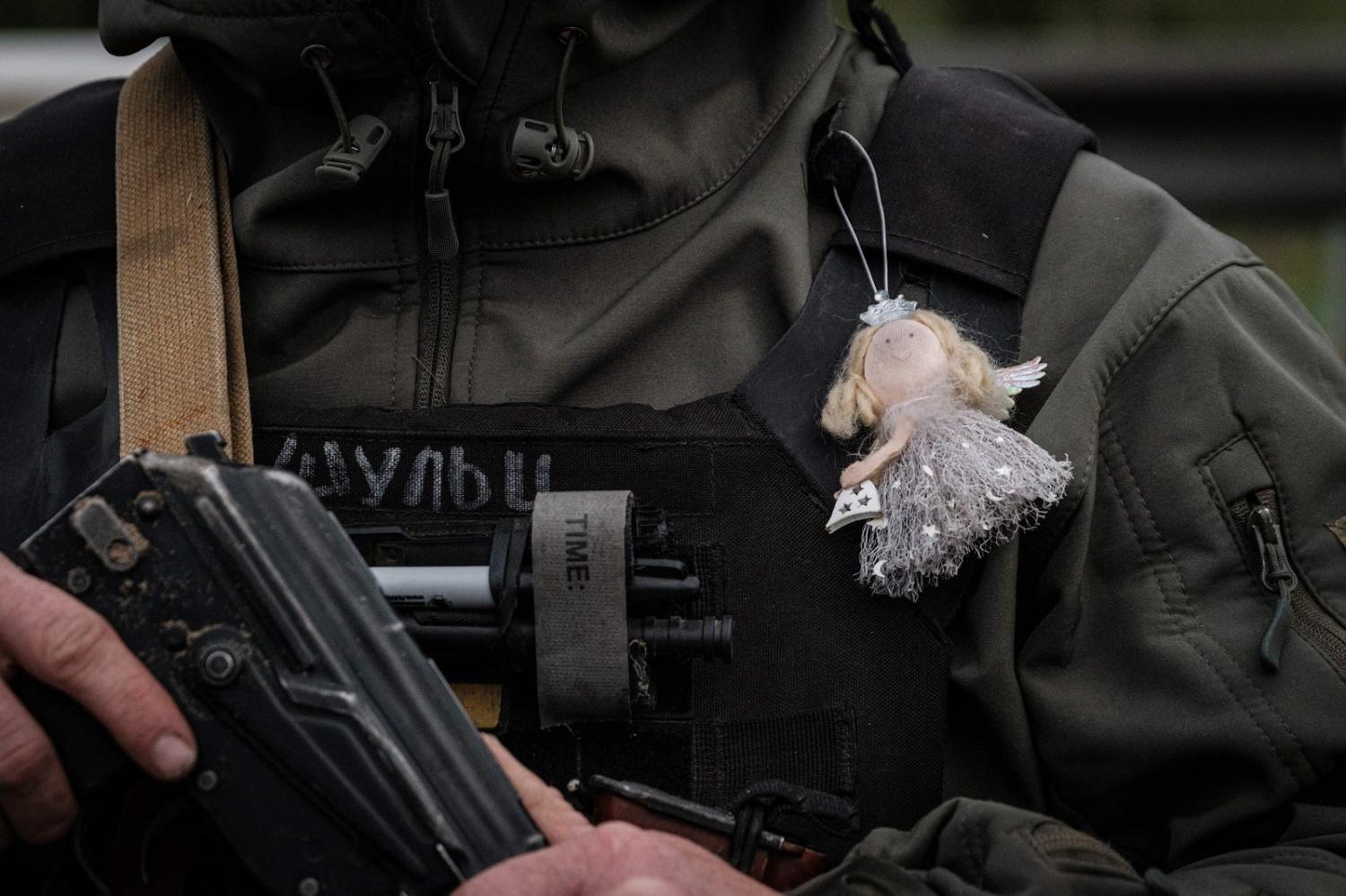 A Ukrainian soldier in Sloviansk, eastern Ukraine, wears an angel ornament given to him by his daughter, 29 April 2022 (Yasuyoshi Chiba/AFP via Getty Images)
Published 23 Dec 2022     Follow ClareECaldwell

Across dozens of articles published this year, The Interpreter has analysed unfolding events following Vladimir Putin’s unprovoked and brutal campaign in Ukraine – from the sudden and explosive dawn invasion in eastern Ukraine, to the recognition of the Donbass and Luhansk as independent states, and the crippling effects of Moscow’s grip on European energy supplies – all adding to the geopolitical ripple effects of Putin’s war.

War by any other name

Just days before Russia invaded Ukraine in what Putin described as a “special military operation”, Victor Abramowicz assessed how open-source intelligence was being used to analyse images gathered from satellites and spies. Jon Yuan Jiang tackled the subject of China, and how Beijing might handle its new, troublesome “no limits” partner:

When the Chinese embassy in Ukraine hastily began the evacuation of its citizens much later than those of other nations, it seemed a sign that Beijing either wasn’t given advance notice of the Russian invasion, or at least failed to grasp the immediacy.

Roland Rajah examined how sanctions might affect Russian energy exports and found Moscow was managing to hold onto its critical financial lifeline.

“President Putin wanted to divide us. He did the opposite.”

Ian Hill captured the zeitgeist in a series of articles that panned across the increasingly chaotic landscape – from the ability of sanctions to weaken Russia’s power projection and early theories on how this all might end, to thoughts on Putin’s domestic support base, the escalation of nuclear threats, and the unlikely prospect of any early end to the war in Ukraine.

There’s been speculation that Russia, on the backfoot militarily, might see advantage in proposing a ceasefire … But Kyiv would surely reject such overtures as a ruse…The likelihood, then, is for protracted, grinding conflict over the winter, and into 2023.

With millions of Ukrainians pouring over the borders into neighbouring Poland and Hungary, Khalid Koser examined the plight of the refugees and how long Europe’s generosity towards them might last. Jane McAdam weighed the value of Europe triggering its “temporary protection” visas for those fleeing Ukraine, while Eglantine Staunton assessed the so-called “rebirth” of the European Union, steeled by the solidarity of fighting a common enemy.

As French foreign minister Jean-Yves Le Drian said on 1 March, “President Putin wanted to divide us. He did the opposite.”

Damien Spry wrote on the cyber dimensions of Ukraine’s seeming early victory in the information war, analysing how the tech-savvy Volodymyr Zelenskyy was using social media to spread his message.

Wars through history have been like lightning flashes over a darkened playing field, suddenly illuminating the dispositions and vulnerabilities of those on the pitch.

With Russia’s “special military operation” bleeding beyond the boundaries of Eastern Europe and generating a full-blown geopolitical crisis, Michael Wesley tackled the question of when and under what conditions the war might end, and what that meant for Asia and the global order.

Wars through history have been like lightning flashes over a darkened playing field, suddenly illuminating the dispositions and vulnerabilities of those on the pitch.

The very real threat of war fatigue was the focus of articles by Bermet Talant and Marcus Colla, who contemplated how Putin had failed to grasp the existential changes Ukraine had undergone since independence in 1991.

In a lighter moment, Kerry Brown mused on how Ukraine’s ambassador to the United Nations, Sergiy Kyslytsya, might be enjoying Brown’s book, What’s Wrong with Diplomacy?, after the ambassador was spotted poring over the final pages at a meeting of the Security Council in March.

On 21 September, Putin upped the ante, announcing the mobilisation of the Russian population and enlisting 300,000 new troops. Peter Layton had already foreshadowed the move in June, having analysed Russia’s dwindling supply of battle-ready forces and its effect on Putin’s strategic calculations.

Is it possible for the United States to be both righteous defender of Ukraine’s right to self-determination and prudent decisionmaker?

To everyone’s surprise, after a month’s hard fighting in Ukraine, the Russian army is now effectively fully committed.

Meanwhile, Donald Rothwell explored the role of the international justice system in holding Russia to account. And Erin Hurley considered the conditions that might force the US Congress to play an active part in the country’s response to a hot war.

Is it possible for the United States to be both righteous defender of Ukraine’s right to self-determination and prudent decisionmaker?

Over the past ten months, The Interpreter has covered these and many other angles on what has been described as an “immoral” war, including its effects on issues from multilateralism, feminism, uranium supplies, clean energy and cryptocurrency to Putin’s kleptocratic rule and how Russia’s neighbours are reacting. Visit our Ukraine key issues page to read more.

The way the defence force is structured and the weapons deployed sends a message beyond the words.
Ian Hill 22 Nov 2022 03:00

Ukraine: No end in sight

A ceasefire proposal would likely be rejected as a Russian ploy, yet with winter closing, neither side can expect let up.
Ryosuke Hanada 8 Apr 2022 10:00