Beijing may find it difficult to handle this troublesome “no limits” partner. 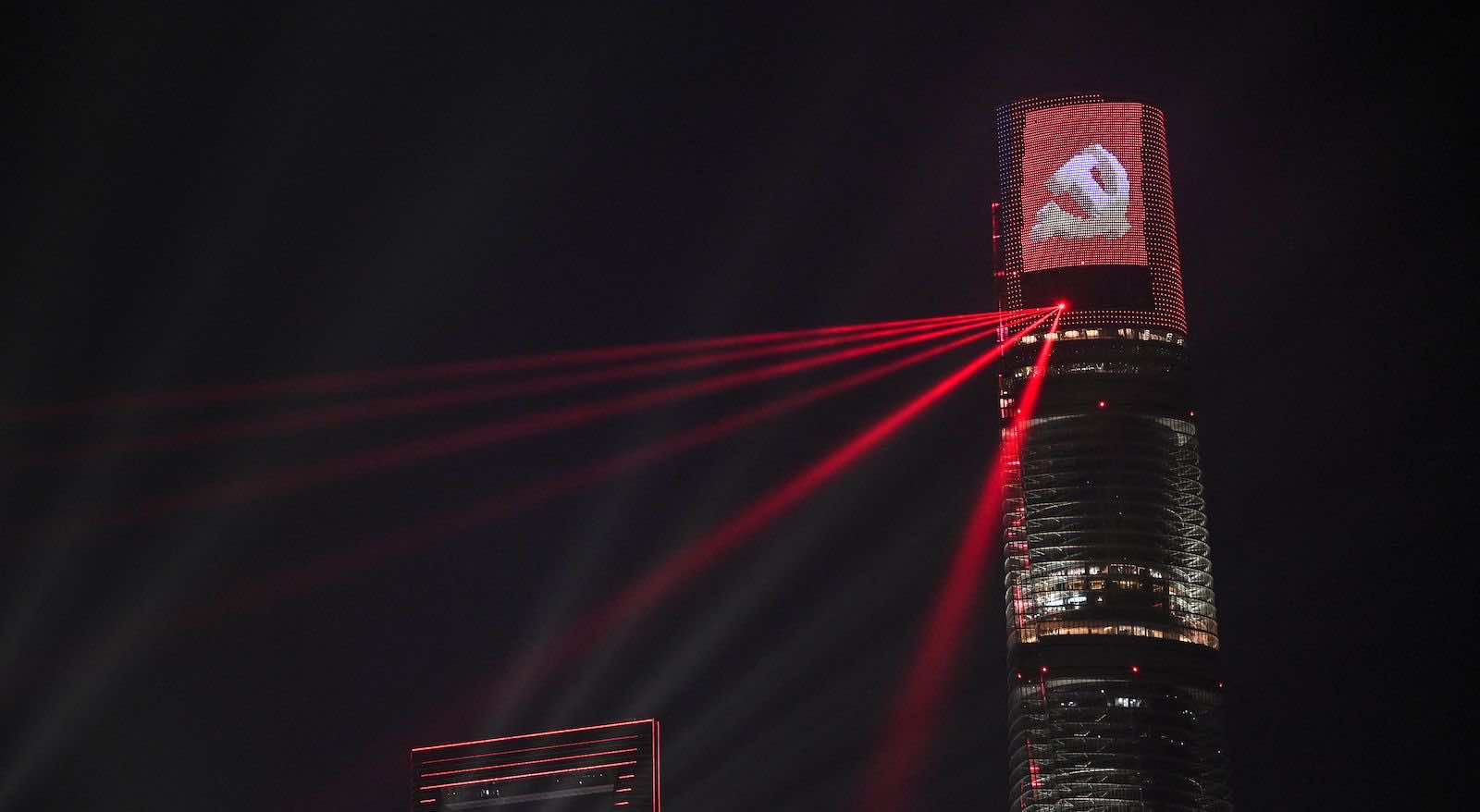 Shanghai Tower in Shanghai, displaying the hammer and sickle communist symbol, which also featured on the flag of the former USSR (Hector Retamal/AFP via Getty Images)
Published 4 Mar 2022 11:00   0 Comments

When the Chinese embassy in Ukraine hastily began the evacuation of its citizens much later than those of other nations, it seemed a sign that Beijing either wasn’t given advance notice of the Russian invasion, or at least failed to grasp the immediacy.

In a call with Russian President Vladimir Putin some days later, Chinese President Xi Jinping indicated as much, by stressing that China would decide its position on Ukraine on the merits, and that it respected the sovereignty and territorial integrity of all countries. Beijing abstained from voting on the UN Security Council resolution denouncing Russia as well as a subsequent call in the General Assembly, despite the recent declaration of a “no limits” friendship, which signalled its subtle diplomatic disapproval of Moscow’s belligerence.

Beijing’s response to the Ukraine crisis has generated intense focus. Some experts argue that Russia’s military operations may bring strategic benefits to China by drawing Western attention away from the country, in much the same way the Afghanistan and Iraq wars in the aftermath of the 9/11 terrorist attacks gave China almost a “golden” decade to develop with little hostility from the United States. However, such conclusions are questionable.

China’s prosperity has been built upon global economic engagement, especially with the developed and technologically advanced West. This environment has been nurtured by recognised international law and a US-led global system. China engaged with this system and sought to grow within it – clearly not without tensions, manifesting especially in recent years, but more because of China seeking to exercise its own influence rather than overthrow the system.

While Moscow aims to wind back the post-Cold War order and reclaim its former grandeur, Beijing wants to expand its role within the current global system.

Russia’s behaviour is different. Ukraine, a sovereign state with global recognition, including by Russia, has been invaded. The Kremlin has offered its justifications, such as its historical ties with Ukraine and the way NATO’s expansion has impinged on its security concerns. More importantly, Putin appears determined to restore Russia as a great power and rid the country of its image as the fragile heir of a collapsed USSR. In his mind, what the West has taken from Russia should be returned, and the historical indignity should be expunged.

China sympathises with Putin’s position. Following a similar logic, Xinjiang and Tibet (China’s autonomous regions) and Taiwan (an historical overhang from the Chinese Civil War) could be carved out of the People’s Republic of China merely as a result of their unique identity.

In the same vein, China, as a rising superpower, could demand Russia return its former Far East lands on the basis of historical ties, regardless of recent efforts to ease tensions. (China has no intention of doing this.) Beijing could also escalate further the South China Sea dispute, given its relative strength compared to neighbouring Asian countries.

But Moscow has followed a “law of the jungle” logic in invading Ukraine and not even offered the pretence of adherence to international norms. While Moscow aims to wind back the post-Cold War order and reclaim its former grandeur, Beijing wants to expand its role within the current global system. In that respect, the Russia-China relationship is limited, and the Kremlin’s long-term strategic interests do not align with that of Beijing.

And even if Moscow can serve to distract Western attention away from China, Beijing may find it difficult to handle this troublesome Russian partner.

As Dmitri Likhachev, a prominent Russian intellectual of the twentieth century, stated, Russia is an unpredictable nation with a long tradition of making abrupt changes. Despite lip service Moscow has paid to China’s Belt and Road Initiative (BRI), academics Igor Denisov and Alexander Lukin argue that in 2021, for the first time, a senior Russian official admitted to Putin that working with China on the BRI projects may undermine Russian influence.

Following the Russian invasion of Ukraine, a group of Chinese historians have said China was “fooled” by Putin, even after the two countries issued a “no ‘forbidden’ areas of cooperation” joint statement, and Beijing offered a gas deal to Moscow estimated to be worth more than $117 billion. The timing of Russia’s aggression in the wake of the February statement has reinforced Beijing’s isolation. Although China’s state-owned banks restricted financing for Russian commodities, China allowed further Russian wheat imports. The upshot has focused unwelcome attention on Beijing, as it appears to be offering Russia a lifeline.

Analyst Yun Sun argues that “as Russia’s largest trading partner, China has significant trade and financial ties with Russia that will be vulnerable to US sanctions”. So, it is possible that this Sino-Russian alignment may be dwarfed by its economic loss in the future.

China needs to rethink its Russia policy. It does not make sense for Beijing to draw any closer with the disruptive Kremlin, at least for now.

Show Comments
Previous Article
Back in the USSR – surprises in the Russia-Ukraine conflict
Next Article
Ukraine: Don’t write off the international order – read and rewrite it