For Congress to play an activist role in managing the US response to a hot war would break with modern precedent. 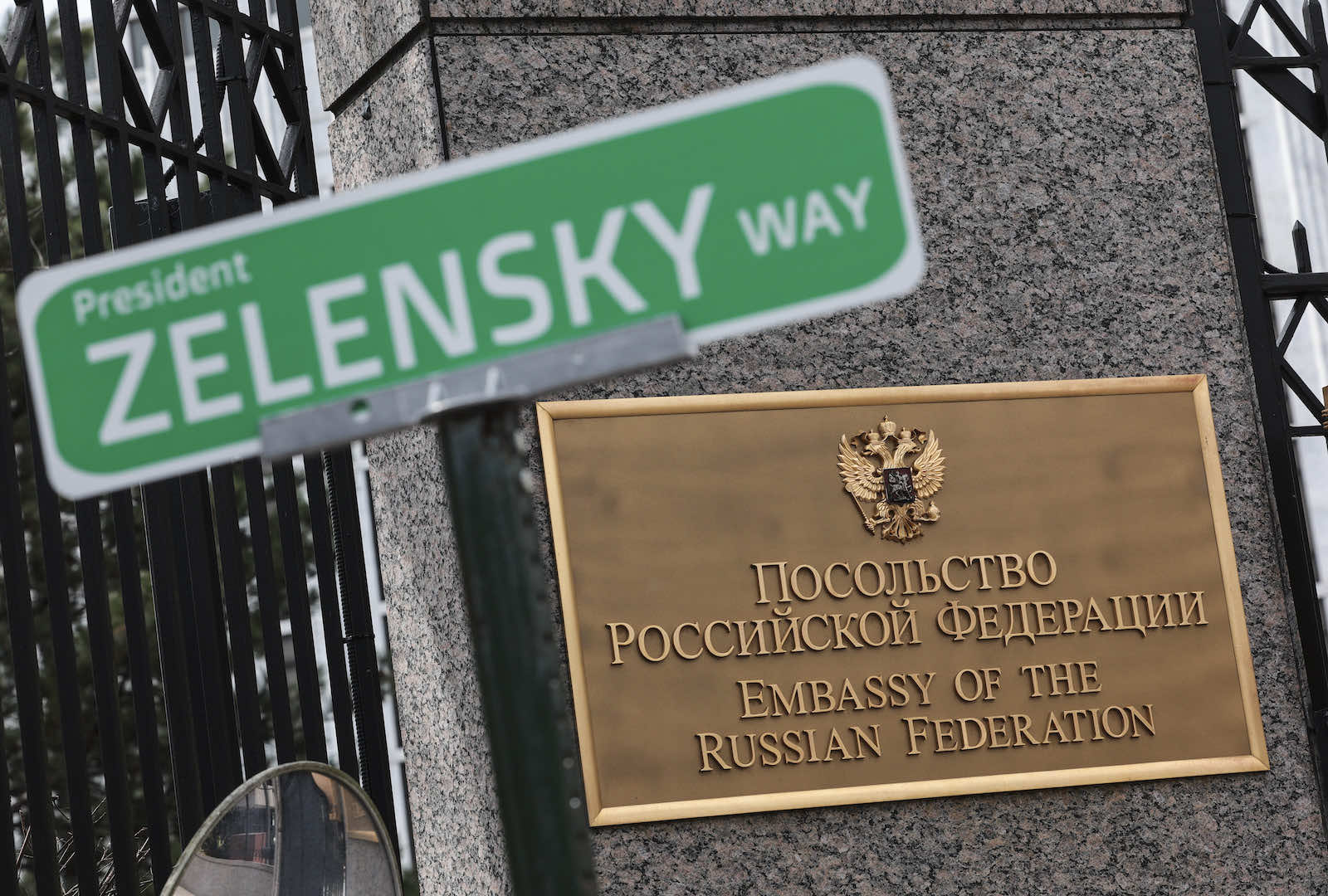 Protesters place a sign in support of Ukrainian President Volodymyr Zelensky outside of the Embassy of the Russian Federation in Washington DC (Kevin Dietsch/Getty Images)
Published 22 Mar 2022 12:00   0 Comments       Follow @erinehurley

Is it possible for the United States to be both righteous defender of Ukraine’s right to self-determination and prudent decisionmaker? The combination of an experienced president and a well-informed US Congress bode well for ongoing crisis management. But judging likely outcomes requires a consideration of how Ukraine has factored into the congressional activity over time, and how Members of Congress responded to Ukrainian President Volodymyr Zelensky’s direct plea for assistance last week.

First, congressional engagement in Ukraine is not new, but the fact that Congress wants to play an activist role in managing America’s response to a hot war is a break with modern precedent. In the post 9/11 period presidential power dramatically expanded as events led Congress to cede questions of war to presidents (i.e. the unlimited duration of Congress’s 2001 Authorisation for the Use of Military Force) and partisanship decreased the political incentive to engage in foreign affairs (i.e. congressional resistance to voting on the potential use of force in Syria after the Assad regime used chemical weapons).

Congress has been debating policy and appropriating money for Ukraine since 1991. Average funding levels reflected changing geopolitical conditions: In the 1990s, Ukraine received an average US$287 million in aid per year. In the 2000s, an average of $199 million per year, and between 2010 and 2014 that aid was reduced to $105 million per year on average.

A big part of the explanation for why Congress has chosen to assert itself lies in the clarity of the situation: A powerful aggressor is trying to take over territory that doesn’t belong to him and he’s willing to kill civilians and topple a government to get what he wants.

Following Russia’s 2014 invasion of Ukraine, the State Department and USAID bilateral aid allocations increased significantly to around $463 million by 2021. Starting in 2017 the Department of Defence provided an additional $250 million in aid per year to Ukraine (also annual average). This funding included non-lethal defensive military assistance during the Obama Administration and then a shift to lethal defensive military assistance under the Trump and now Biden administrations.

During this period congressional efforts also intensified on the diplomatic side. In 2018 the Senate NATO Observer Group, a bipartisan group originally formed in 1997 to strengthen congressional ties with NATO, was relaunched by Democratic Senator Jeanne Shaheen and Republican Senator Thom Tillis. The group’s members include the Chair and Ranking Members of the most powerful foreign and defence committees in the Congress. The group sent Biden a letter in advance of his trip to Brussels this week in which they conveyed “robust bipartisan support ahead of your trip” and offered advice regarding the way ahead.

Like other Western governments, a big part of the explanation for why Congress has chosen to assert itself lies in the clarity of the situation: A powerful aggressor is trying to take over territory that doesn’t belong to him and he’s willing to kill civilians and topple a government to get what he wants. As the leader of the victimized country, Zelensky has inspired congressional leaders with his “unembarrassed, defiant belief in a cause”.

Reporting from Brussels indicated that European leaders were emboldened to take more significant action to punish Vladimir Putin after seeing Zelensky via video chat the day after the Russian invasion began. For Europeans Zelensky’s plight likely served as a reminder of their own geographical vulnerability, but their words and actions over the past few weeks suggest they were also inspired regarding Ukraine’s chances for survival.

Zelensky’s speech before the US Congress last Wednesday had a similar effect. Members of Congress filed soberly out of the auditorium where they had gathered to listen to the virtual address, many in deep conversation with one another. Most would have been fully briefed prior to the speech on the situation in Ukraine and what Zelensky’s would likely ask, but the speech – along with a video that depicted the destruction of civilian infrastructure in Ukraine and child victims – appeared to affect them, nonetheless.

… throughout the entire conflict we have had this assumption with our intel committee, with all the briefings we get, that it’s just a matter of time … when they’re going to lose. That’s been the underlying assumption from our intel community – and I’m not blaming them … it’s been a lot of people’s assumption. When that happens then all decisions that we make in our government are based on that idea: they’re going to lose eventually. I think we need to change that underlying dynamic, particularly when you see a rousing, inspiring speech like that, which is they could win. They could win.

Apart from GOP leadership, the members like Sullivan who stepped up to the pool microphone after the speech often reflected a high level of consensus, presenting a united front, ceding the microphone to one another and speaking extemporaneously about what how they planned to work together.

Republican party leaders and presidential aspirants included criticism of the Biden administration in their remarks but it’s notable that despite Zelensky’s plea to “close the skies over Ukraine” no one supported a US or NATO enforced “no-fly zone”, emphasising instead to what types of weapons the United States can provide to all the Ukrainians to close their skies from the ground. Republican Senator Rob Portman of Ohio focused in on these issues in his comments: “We need to figure this out. We need to be creative. We need to take the money that Congress has provided to protect against the civilian casualties that we saw today in that powerful video.”

Congress approved $13.6 billion in emergency spending related to the fight in Ukraine last week. This spending includes $6.9 billion in foreign aid, $3.5 billion for military supplies, and $3 billion to support US deployments and intelligence assets to allied countries in Europe.* The challenge facing US policymakers in the executive and legislative branches lies in finding ways to support Ukraine without escalating the conflict. This balancing act requires working through “tortured distinctions” over how to ensure that the weapons provided do not threaten Russian soil and that American and/or NATO’s level of involvement does not cross over some unknown red line in Putin’s mind.

It’s reasonable to ask whether decision-making during this crisis will suffer from too many voices in the room, but there’s very little daylight between the White House and Congress. And given the stakes, robust ongoing debate over the pace and lethality of American involvement in Ukraine seems appropriate.