A ferocious typhoon has tested Japan amid the Rugby World Cup and before the Olympics – and taught valuable lessons. 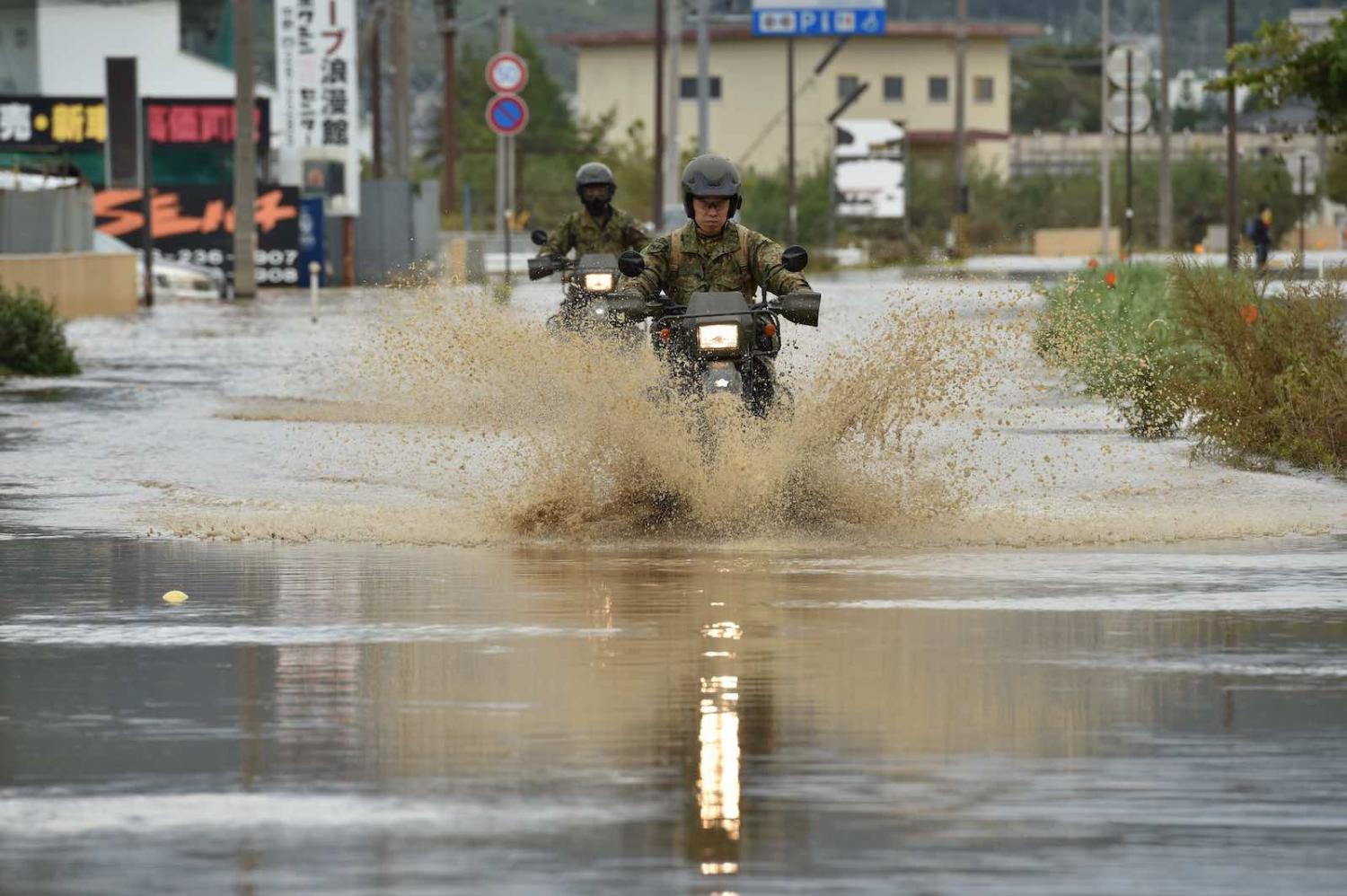 Military personnel drive their motorbikes down a flooded street in the aftermath of Typhoon Hagibis in Nagano on 14 October (Photo: Kazuhiro Nogi/AFP/Getty Images)
Published 29 Oct 2019

Typhoon Hagibis was the most powerful typhoon to hit Japan in decades. The storm’s ferocity was extraordinary, and the level of destruction immense. At least 78 people have been killed, and more than 230,000 evacuated.

Notably the typhoon, the 19th to hit Japan this year, struck the east coast of Honshu as the country is hosting the Rugby World Cup. Fortunately, levees in Tokyo withstood the massive inundation and did not collapse as feared. Projections in 2017 suggested that as much as a third of Tokyo could be flooded, with substantial loss of life, if the levees were to fail.

It does, nonetheless, raise the potential for such a disaster to occur, given the trend towards more violent weather occurrences as a result of global warming. With Japan hosting the Olympics in Tokyo next July and August, the Japanese government is conscious of the need to fine-tune procedures for natural disasters and to repair damage to vital infrastructure caused by Hagibis as quickly as possible. Clearly the rapid response to the typhoon is first and foremost to assist people in need and to repair essential services. Nonetheless, the quick and effective action by the Japanese authorities and Self Defence Forces serve to showcase Japan as a nation that is resourceful and resilient.

Japanese intentions to rebuild infrastructure quickly are supported by a ¥500 billion (US$4.6 billion) fund to support disaster relief, and the promise by the Abe government of more money, if required. Areas badly affected in Fukushima and Miyagi Prefectures require considerable support and rapid rebuilding of infrastructure to be ready for flow-on Olympic tourism. Another point to note from the floods is that aging infrastructure across Japan, especially provided by private companies such as TEPCO, is vulnerable and will be more so over time as budgets for maintenance are constrained.

In terms of the Rugby World Cup, Japan has had tremendous success so far hosting the event, despite the typhoon. Indeed, the Japanese “Brave Blossoms” won the hearts of millions of Japanese and rugby fans worldwide by beating first-tier rugby teams and making it to the quarter finals. The Rugby World Cup is useful preparation for the Tokyo Olympics, which will draw massive crowds to events and receive extensive network coverage around the world. Preparation for the World Cup and Olympics in particular has also provided Japan with a much-needed economic fillip after three decades of economic malaise.

Throughout the highs and lows of disasters, Japanese people have retained extraordinary levels of “community spirit” to deal with a crisis.

Apart from national pride and the excitement of supporting the home team, there are major incentives for Japan to host major events such as these. It is an opportunity to remind the international community that Japan has not faded; it remains a vibrant, highly advanced society with an alluring mix of traditional values, state-of-the-art technology, and “cool” pop culture. There are also economic benefits to the Japanese economy through an increase in the number of tourists visiting Japan (the government objective is to increase tourism from 1 million to 2 million people per year) and the promotion of Japanese goods to an international market. This is particularly important given stalled efforts to stimulate the economy through “Abenomics”.

Typhoon Hagibis is also an unpleasant reminder that Japan, along with being prone to earthquakes, has a long history of extreme weather conditions (typhoons and tsunamis) that may only worsen with climate change. The triple disasters of March 2011 – earthquake, tsunami, and subsequent shutdown of the Fukushima nuclear power plant – are still very recent memories and have left an indelible mark on disaster-relief efforts.

The lack of coordination and vital information during the “triple disasters” has led to major re-evaluation of disaster planning. Notably, coordination of government agencies during the typhoon was highly efficient, and the agencies did a very good job ensuring smooth evacuations of people facing the full force of the typhoon and restoring power and other essential services afterwards. Importantly, the Japanese Bureau of meteorology has a clear and easy-to-use website in English to assist visitors.

There were some criticisms, however, that have bearing on planning for a disaster during the Olympics. Alerts in languages other than Japanese were translated by machine and caused frequent misspelling and confusion. In particular, typhoon updates and alerts were in only a few languages – English, Mandarin, Korean, Malay, Tagalog, Indonesian, and Vietnamese – which raises potential for communication mishaps should a disaster occur during the Olympics.

Throughout the highs and lows of disasters, Japanese people have retained extraordinary levels of “community spirit” to deal with a crisis. This spirit, as well as the expectation of strong government support and assistance, is an important factor in the restoration of areas affected by the typhoon.

Notably, discriminatory behaviour was reported; two homeless men were refused entry to the Taito Ward shelter. Their plight led to debate in parliament and an apology by Prime Minister Shinzo Abe. Yet the open discussion and willingness to highlight areas in need of improvement is indicative of an increasingly transparent and intelligent response to disasters that is a useful model for other countries to emulate.

Previous Article
The vulnerable state of Islamic State
Next Article
With a UN Human Rights Council seat, Indonesia has a choice

Problems and disagreements between the Afghan government and its international allies have impeded progress.
Michele Grossman 1 Apr 2020 15:30

Coping with crisis: How much “resilience” is on display?

Covid-19 shows the idea people triumph alone over adversity is a myth – it takes the support and resources of a society.