Ultimately, the legacy of RAMSI will not be measured by what was achieved over the last 14 years, but by what happens in the future.

Understanding how and when governments might intervene in failing countries is an art rather than a science. It requires detailed knowledge of the country in question, the resilience of the people and systems in relation to the emerging crisis, and the willingness of the people to accept an intervention. There are domestic political considerations too. Successive Lowy Institute polls have shown that while the Australian public are likely to support stabilisation operations in the Pacific, or deployments to stop a government bent on genocide, the deployments to Afghanistan and Iraq proved much less popular.

Yet despite the complexity of these interacting factors, a systemic approach to resilience and fragility may help policymakers better identify threshold indicators that warn of an impending crisis. As I outlined in my previous post, breaking complex systems down into understandable components allows the formation of a framework to assist in understanding fragile states. The end of the Regional Assistance Mission to Solomon Islands (RAMSI) this week is a good opportunity to look back and see how this framework could have been used to pre-empt crises in Solomon Islands and, more importantly, how it can assist policymakers and officials identify future stresses in the country.

It has been 14 years since the Pacific community agreed to send a regional intervention force to the Solomon Islands under Australian leadership. By the time troops, police and administrators landed in Honiara to establish RAMSI, the violence had already cost an estimated 250 lives. The economy was also in tatters. GDP had dropped by about 24% between 1998 and 2002 and by 2003 external debt had ballooned to almost 80% of GDP. This is partly because Australia had declined to intervene, despite repeated requests from successive Solomon Islands Prime Ministers, since the start of ‘the tensions’ in 1998. In the time it took the international community to respond, a gradual increase of chronic stresses had overwhelmed political, economic, security and social cohesion systems to crisis point; that is to say they were no longer functioning.

Before looking at how the model may help policymakers identify any future deterioration of security in Solomon Islands, it is useful to look back and examine the period leading to the RAMSI deployment. 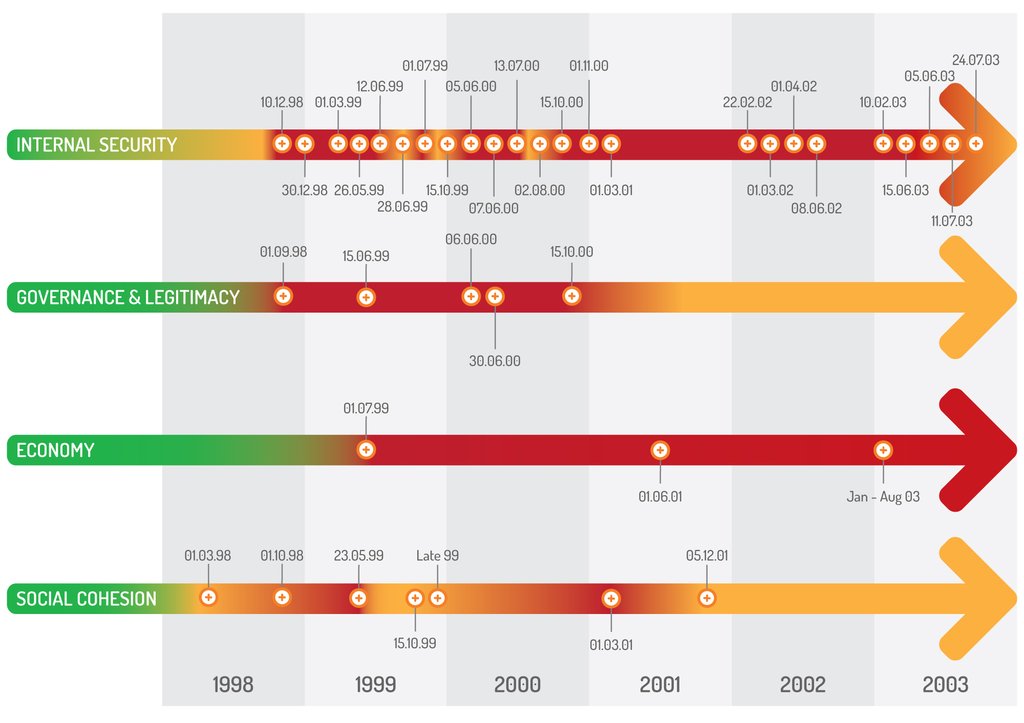 One of the strengths of the model is it does not dictate which systems should be examined. This allows it to be tailored to the differences of each country, or region, being examined. For Solomon Islands I have chosen to examine four systems: international security, governance and legitimacy, economy, and social cohesion. Along these four lines I have plotted events that, in hindsight, can be seen to be threshold indicators - which is to say they signified additional stresses or sudden shocks that put the system under pressure. (Hover your cursor over each point on the line to see details of the event.)

Analysis of these threshold indicators are instructive. Although there were several instances of intervention in the lead up to RAMSI, they did not manage to reduce the stresses beneath the threshold tolerance. One example was the deployment of the International Peace Monitoring Team (IPMT). The team, comprised of 47 unarmed members from defence, police, and civilian agencies, was tasked with the ‘supervision of the surrender of weapons, regular inspection of the stored weapons, [and] confidence building within affected Solomon Island communities’.

Yet ultimately the IPMT was not designed to deal with the conditions it found on the ground. The parties to the conflict did not believe it was in their best interest to disarm and the IPMT did not have the mandate to enforce a peace. While the then-Foreign Minister, Alexander Downer, put a positive spin on the withdrawal of the IPMT, stating ‘its departure reflects the change circumstances on the ground’, the reality was that the conditions were not ‘ripe’ for intervention, at least not by unarmed personnel.

The departure of RAMSI has led to some to question whether Solomon Islands is ready to strike out alone. There have been some reports in the media that locals remain sceptical of the capability of local police. The outgoing Special Coordinator, Quinton Devlin, has emphasised that advisors will remain in country and Solomon Islands will continue to receive assistance in the form of aid. So, what warning signs should those advisors look out for?

First, they should identify which systems they, as advisors, have the capability and expertise to monitor, and determine which of those systems are the most fragile. Looking back at the historical analysis, these are likely to be internal security - based on the perceived legitimacy and capability of the Royal Solomon Islands Police Force - and the economy.

Efforts should then be focused on identifying likely threshold indicators and how the stresses that are likely to have caused them can be addressed. This will allow action plans to be developed and put in place before a system reaches crisis point.

Finally, to ensure resources are available to react to any system shocks, the delivery of financial aid needs to be flexible, allowing money and resources to be switched to support systems under pressure, even if that was not the original planned destination. To allow this to happen, advisors should use the same framework and monitor a consolidated list of threshold indicators. They should meet regularly to discuss the state of the systems they are monitoring to avoid stove piped attitudes developing.

There is much that those who have served in RAMSI should be proud of: it stabilised a nation and gave the people hope. Ultimately, though, the legacy of RAMSI will not be measured by what was achieved over the last 14 years, but by what happens in the future. This model may assist in pre-empting risks to that future.

Previous Article
A silver fern lining to Fitzgerald collision
Next Article
Economic diplomacy brief: Trade under pressure, betting on China, Japan and the AIIB, and more

Migration and border policy links: Trump-Turnbull transcript, trafficking in the Gulf and more

This weeks links include the death of an asylum seeker on Manus Island, the RAISE act, and refugees, migration and trafficking in the Gulf.
6 Dec 2017 16:16

Updates on developments across the Pacific.
Rodger Shanahan 18 Jul 2017 11:01