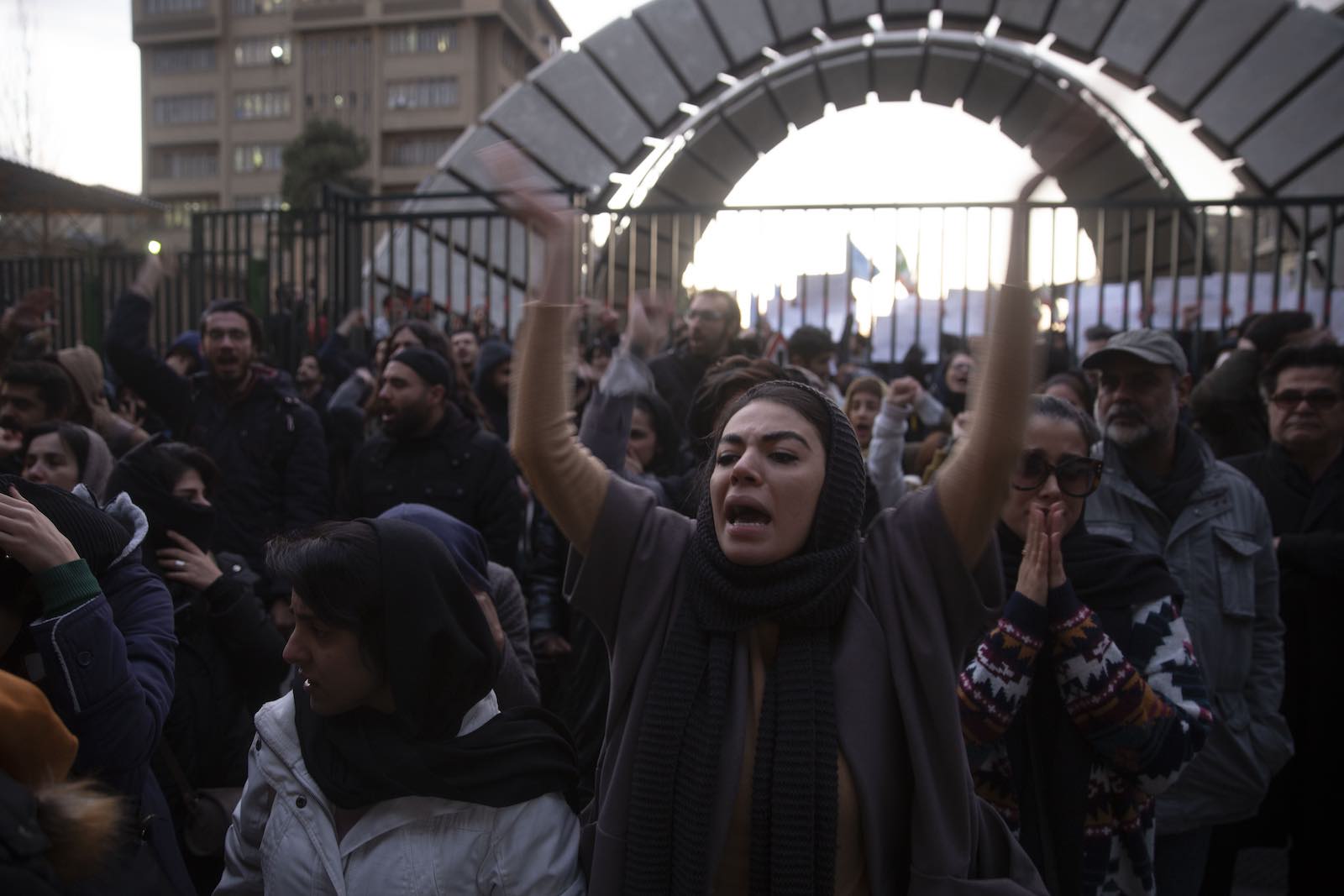 A vigil for victims of the Flight 752 plane crash was held at Amri Kabir University in Tehran, where some of the victims were former students, 11 January (Photo: Majid Saeedi/Getty Images)
Published 14 Jan 2020 16:00   0 Comments       Follow @RodgerShanahan

The briefing provided by the aerospace commander of Iran’s Revolutionary Guard Command (IRGC) regarding the downing of Ukraine International Airlines Flight 752 was revealing for both what it told and what it didn’t tell us. To begin with, the incident appears to have been a tragic operator error.

But catastrophic errors of the sort that led to the deaths of 176 people are inevitably the culmination of a number of mistakes. Firstly, the weapons system that fired the fateful missiles appears to have been brought in as additional support to the Tehran air defence umbrella after Iranian defences were raised to a state of “war readiness” at sunset before the shoot-down. As a consequence, it is highly unlikely that procedures had been well practiced between the detachment commander and the Tehran air defence command chain.

To what degree do the Iranian people lay blame at the feet of the conservatives, the moderates, or the whole Iranian political system for the tragedy of Flight 752 and the initial denial of responsibility?

The most egregious error, though, and from which so many others would flow, was the decision not to close the airspace to civilian aircraft movements, particularly as the commander also noted that the “highest level of alert” for all systems was activated at various stages. The IRGC aerospace commander stated that such a request was made but was refused. He also noted that early warnings of cruise missile launches from outside the country entering Iran were received “at different levels and at various intervals” and that cruise missile launches were twice confirmed.

If the air-defence weapons systems were at their highest level of alert and reports of incoming cruise missiles were being received, then the refusal to close down the airspace is unforgiveable. The air-defence commander also claimed that the operator believed Flight 752 to be an incoming cruise missile and sought permission to fire, but he was unable to establish communications, so he gave the order to fire.

None of this would have mattered if the airspace had been closed while Tehran’s air defence systems were on their highest alert status. The Iranians have promised to release more information after the inquiry is complete, and it will be eagerly awaited.

Thread on statements regarding #IranPlaneCrash by Commander Hajizadeh of the Islamic Republic's Aerospace Force (1): "When I acquired certainty on what had taken place, I truly wished I had died to not witness something like this [taking place]." pic.twitter.com/m57e7QLLbO

What this means for the situation domestically in Iran is not yet clear. Given Iranian’s strong nationalist pride, there certainly will be a sense of shame and anger at what the IRGC did, anger at the delay in accepting blame for the downing of the aircraft, and the need to hold individuals accountable other than just the commander of the weapons system. This anger is evident in the limited demonstrations against the government that have been widely reported.

The full measure of the public’s attitude to the government and the regime more broadly is likely to be seen in the parliamentary elections coming up on 21 February. The last election, in 2016, reported a 62% turnout, slightly higher than the historical average of 60.5%. One would expect a high turnout this time around, given people’s feelings over recent events. A lower-than-expected one would suggest a repudiation of the political system, which wouldn’t be welcomed by the regime.

With this in mind, there are already indications that some elements are positioning themselves to navigate away from the negative repercussions of the Flight 752 disaster. The political stock of moderates has taken a battering since US President Trump’s abrogation of the 2015 nuclear deal, which was closely tied to the political identities of President Hassan Rouhani and Foreign Minister Javad Zarif. But Rouhani’s office was quick to distance itself from the initial denial of responsibility, apportioning blame to the “relevant authorities” (read: IRGC) and with them the forces of Iranian political conservatism. Other conservative commentators are keen to blame “the government” for the delay in accepting responsibility.

But to what degree do the Iranian people lay blame at the feet of the conservatives, the moderates, or the whole Iranian political system for the tragedy of Flight 752 and the initial denial of responsibility?

The answer will become more apparent after 21 February.