Like much of the world, Germans watched the election of Donald Trump with surprise and dismay. 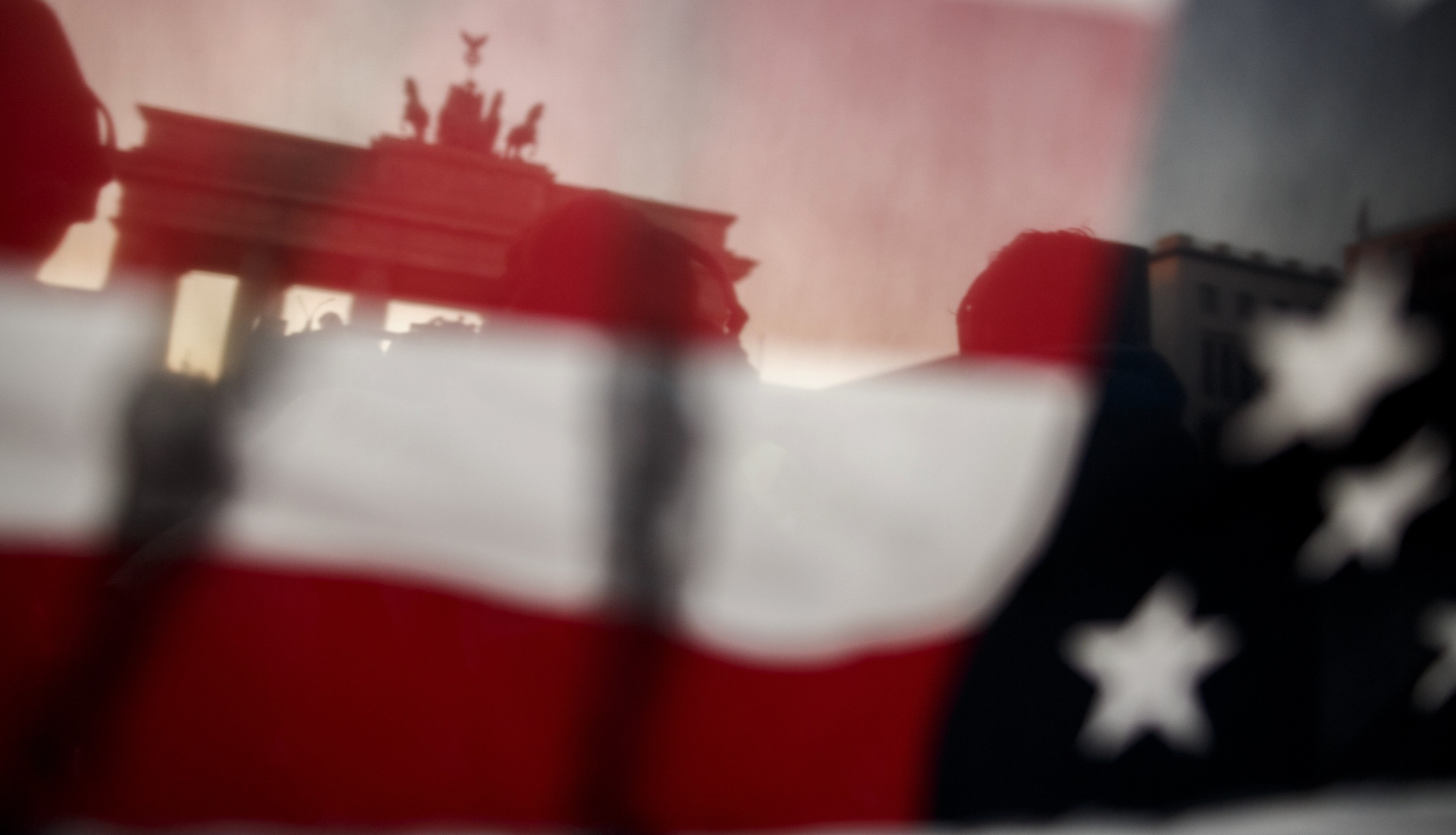 Like much of the world, Germans watched the election of Donald Trump with surprise and dismay. It signified the ascent to high office of a man whose values and political methods have shocked even the most conservative of observers, and whose foreign policy positions threaten to unravel a system responsible in large part for seventy years of peace and prosperity.

Berlin had banked on a Hillary Clinton victory, with all the predictability that would have entailed. The election of her opponent now offers the real possibility that America will withdraw from Europe the unwavering military, political and moral support that has formed the bedrock of inter-Atlantic relations since the end of WWII. This will inevitably throw up the ancient question of Germany’s role in the western world.

In the face of Brexit, an insurgent right-wing populist movement in France and now Trump, defenders of the liberal west have turned to Germany as a beacon (or, indeed, the sole remaining bastion) of democratic stability and liberal values. Its chancellor, Angela Merkel, has been pronounced by the New York Times as ‘the liberal west’s last defender’, while the Financial Times has referred to her ‘overwhelming responsibility’ to counter publicly the boorish and intolerant anti-modern creed espoused by the US president-elect. Unlike many colleagues Merkel held her tongue during the campaign, but did issue a remarkable statement on 9 November. ‘Germany’s ties with America are deeper than with any country outside of the European Union’, she said. ‘Germany and America are bound by values – democracy, freedom, respect for the rule of law and the dignity of people, independent of their origin, skin colour, religion, gender, sexual orientation, or political views’. On this basis, she stipulated, would European-American cooperation continue. The message was no less extraordinary for the fact that it came from the lips of a politician not renowned for her rhetorical loftiness.

In proclaiming that Hillary Clinton ‘wants to be America’s Angela Merkel’, Donald Trump thrust the German chancellor into his campaign as a paragon of everything he deemed corrupt among the elite liberal class (though with typical irregularity he also described her as a ‘great world leader’). Personal differences between German and American leaders, of course, are nothing new: Social Democrat Chancellor Gerhard Schröder endured a frosty relationship with George W Bush at the time of the Iraq War, while Jimmy Carter reflected in his diary that his 1980 loss to Ronald Reagan at least carried the silver lining of no longer having to deal with the arrogance of Helmut Schmidt. But the ascendency of Trump seems more fundamental. Even in times of disagreement, Germany could always rely on its most significant ally to defend communal values. These now seem threatened, as indeed does the strength of the alliance itself.

Merkel can be secure in her conviction that Germans affirmatively adhere to the values that Trump imperils. In an October survey, only 8% of Germans claimed they would have supported him as president (compared with 69% for Clinton), while 65% responded they would feel ‘afraid’ were he to be elected and 75% thought he would make a bad president. Certainly, Merkel faces a surge of right-wing populism at home, but fears of its effects seem overblown. In the face of a crisis, she is gambling that Germans will rally to the defence of the existing order as an expression of politically transcendent values. For her, the system itself is fundamentally good.

After all, Merkel’s predecessors in the Christian Democratic Union (CDU) were central in laying the groundwork both for a strong German-US relationship and a resilient democratic system. What Chancellor Ludwig Erhard once called the ‘socially committed market economy’ has been the foundation of the German state ever since, and is now being invoked by senior political figures like the Social Democrat Sigmar Gabriel as the securest buffer against any Trump-like threat domestically. Indeed, this is why it was built in the first place. The system is not the problem, but the solution. Yet it is not perfect or self-sustaining. It is fragile, and needs to be defended. The election of Trump is threatening not because it is a surprise, but because it represents an awakening of long-held fears of the disintegration of the very values through which the system is legitimated.

The point is less that Germany has a particular aversion to Trump because of its twentieth century; such reductive history is rightly dismissed in Berlin. Rather, Trump’s appearance confirms the dissolution of the legitimacy of a meticulously constructed domestic political order. In the eyes of German politicians, the social-democratic and Christian-democratic political models must be maintained through an act of will, for they transcend the country’s political institutions and extend always into the ethical sphere. This emphasis upon the state’s obligation toward the welfare of citizens is the glue that connects abstract institution with citizen. Over the past seventy years, it has survived much. But the Trump phenomenon signifies a long-recognised threat. This is what Der Spiegel is hinting at in this week’s cover page, subtitled ‘The end of the world (as we know it)’.

Germany’s most renowned academic Jürgen Habermas expounded this threat in the 1960s. For him, the ‘scienitification’ and ‘bureaucratisation’ inherent in modern politics produced a profoundly estranging effect. The increasing political reliance upon bureaucracy created a new stratum of elites, alienating most ordinary people from the political process and rendering them passive. Legitimacy for the system thus came to derive disproportionately from a particularly fragile source: economic success, in whose absence the system stood imperilled. Following the great financial crisis, one could argue, Trump’s mobilisation against elites and bureaucrats reflects precisely these systemic failures. What may once have been called ‘disaffection’ with the process has now assumed a more radical tone.

The perceived threat to the legitimacy of the German political system in the absence of liberal values explains why parallel denunciations of Trump have emerged from all across the political spectrum. Sigmar Gabriel, Merkel’s probable opponent in next year’s federal election, has reflected that ‘Trump is also a warning to us’. In his words, the president-elect is a ‘trailblazer of a new authoritarian and chauvinistic International’ with tentacles all across the western world. This ‘International’ stands against much more than open immigration or the EU; indeed, it expresses a global movement of reactionaries driven by sexism, racism, homophobia and nostalgia, who aspire to nothing less than rolling back decades of progress. In Germany it is represented by the Alternative für Deutschland, whose leader, Frauke Petry, greeted the Trump victory with enthusiasm.

Yet the German political class’ furious defence of the established order is not simply about defending common values. There is also domestic imperative at play. Gabriel’s attack on Trump is at the same time an attack on Merkel, whom he depicts as a representative of precisely the ‘market-conforming democracy’ Trump’s supporters so emphatically rejected. The message from his side of politics is clear: only the Social Democrats can defend Germany against the new tide of populism. Merkel’s economic path (not her immigration policy) is what is truly widening social divisions and threatening the social compact.

Gabriel’s may prove to be a fruitful debate. But the Trump ascendency portends an even more fundamental discussion about the US alliance and Germany’s position in the world. Given that Trump is an unknown and unpredictable quantity, the nature of Germany’s relationship with the US remains unclear. His erraticism is further compounded by his vagueness in matters of foreign policy. In this situation, Defence Minister Ursula von der Leyen sought to provide some calm, cautioning that ‘we would be well advised not to place too great an emphasis upon the strong words of Donald Trump in the election campaign, even those against Germany’. Viewed from Berlin, Trump’s promotion of an America-first doctrine is a prospect whose terror is overshadowed only by the president-elect’s stoic defence of Vladimir Putin and his machinations in Eastern Europe. What this will mean in practice is anybody’s guess, but should Putin start rattling his sabre in Europe once more, it may well be to Germany rather than the US that smaller nations turn. More immediately, with a Putin-friendly president in Washington, Germany may well become the chief target of the Russian president’s anti-West crusade. Merkel’s determination to uphold western values seems an early indication that she is willing to face the challenge.

The only consensus among the German political class is that a Trump presidency, one way or another, will prove a challenge; as Foreign Minister Frank-Walter Steinmeier put it, ‘nothing will get easier, much will get harder’. And no question will be more difficult than that of military investment. Before the election, Der Spiegel wrote that a Trump victory would catapult the divisive issue of armaments to the forefront of German politics. In the absence of America’s security guarantees in Europe, attention would naturally turn to the continent’s leading economic power to plug the gap. This would entail at least a doubling of military expenditure, a decision that could only be reached after much acrimonious debate.

This particular policy has long been a troublesome arena of German politics. Not least for historical reasons, Germany has traditionally shied away from hard power. Cold War polemics between East and West Germany often revolved around accusations of aggressive policy. After reunification in 1990, opposition to military engagement in the former Yugoslavia remained widespread even in the face of an intensifying humanitarian crisis. Germany’s acquired fetish for diplomatic solutions likewise led to Merkel’s assumption of European leadership in dealing with the Ukraine crisis – a crisis contained if unresolved. Yet the United States has for some time demanded greater military investment on the part of its ally.

Germany has been a reluctant leader in Europe, but the durability of its politics and its economy has left it as something of a last man standing. Since 1945, German power has largely resided within inter-governmental institutions. But should a Trump presidency deliver a profound crisis of western values, exploited by Putin and the Euro-populists who so admire him, then Germany will be forced to choose: assume for itself the mantle of leadership, or surrender the principles on which its success was built.

Show Comments
Previous Article
Cults, cabals and corruption in South Korea
Next Article
How Australia should respond to Trump