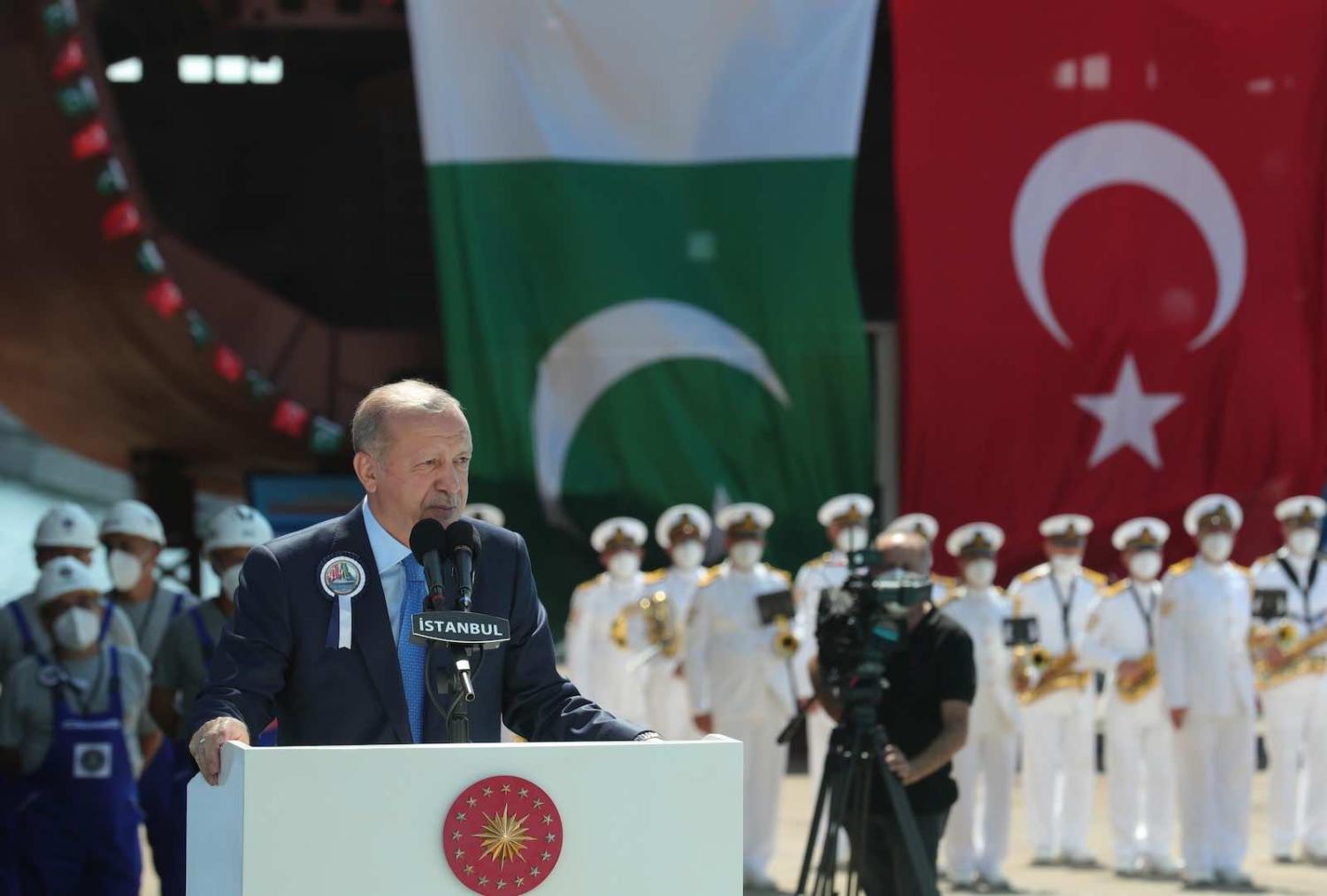 Amid the chaos of the Taliban takeover in Afghanistan, regional players including Turkey have been jostling to position themselves with the new regime and take advantage of the benefits from the vacuum left by the United States and NATO. Turkish President Recep Tayyip Erdoğan has stated that he is open to cooperation with the Taliban regime, despite criticisms of the Taliban previously.

Turkey is no stranger to the Afghanistan conflict, having been involved in NATO operations since 2001. Turkey’s ruling Justice and Development Party, or AKP, also has had a solid relationship with Afghanistan’s previous governments while building stronger regional relations with Pakistan and Iran to navigate Afghani affairs.

As US and NATO withdrew from Afghanistan, Turkey was primed to take control of the security of Hamid Karzai International Airport in Kabul. The quick fall of the Afghan government to the Taliban left this proposal in doubt, however. The Taliban have offered Turkey the opportunity to provide logistical support to Kabul airport, with the Taliban maintaining the airport’s security.

Combined with a spiralling economic situation and many policy failures relating to the Covid-19 pandemic and the recent bush fires in southern Turkey, it is unlikely that Erdoğan can afford another risky foreign policy blunder.

The Taliban’s outreach to Turkey is thought to be an attempt to stop the new regime from becoming isolated and sanctioned by the international community. Having control of the airport could open economic relations with the Taliban for Turkey and allow cheap Turkish goods to flood the Afghan market, while providing opportunities for AKP aligned Turkish construction firms to rebuild the war-torn country. Controlling the airport allows Turkey to regulate what comes in and out of Afghanistan in terms of aid. It may also provide a leverage point to bring it back into the Biden administration’s good graces.

Relations between the US and Turkey have deteriorated since the 15 July 2016 coup attempt, Turkey’s acquisition of S-400 Russian missiles, and the Halkbank oil-for-gold case in US courts. Being the last NATO member in Afghanistan and a key point of communication between the Taliban and the West could provide Turkey with the regional mediating role it has long aspired to. But it may mean Turkey is one of the only NATO members to recognise the Taliban regime.

Other powers such as China, Russia, Iran and Pakistan maintain diplomatic presences in Afghanistan and have indicated they will work with the new regime once the situation has settled down.

Turkish foreign policymakers have a history of pie in the sky thinking where rhetoric never meets the reality on the ground. The move to engage with the Taliban is hazardous ­– even more so if Turkey recognises the Taliban government.

The recent Islamic State attack that killed at least 110 people and 13 US troops, however, demonstrates that the Taliban is not yet in complete control of the airport to provide the security Turkey needs. Erdoğan can ill afford a massacre of Turkish forces on his watch, given the politics at home and continued adventurism by the Turkish military in Syria, Libya, and Azerbaijan. Turkish private security contractors or Syrian aligned rebel forces with ties to Turkey used in previous conflicts such as in Azerbaijan and Libya as part of the AKP’s frontline military strategy could provide an avenue in which Turkey can maintain a presence in Afghanistan without political and military cost.

Many structural issues will probably impede Turkey’s ambitious role in Afghanistan. First, Erdogan will need to contend with an expected rush of Afghan refugees heading towards Turkey’s eastern border. Domestically, nationalist fever and anti-immigrant tension have been running high towards the Syrian refugee population. Foreign policy adventurism has been a great tool to distract from domestic failings, but its efficacy is waning as domestic challenges continue.

Combined with a spiralling economic situation and many policy failures relating to the Covid-19 pandemic and the recent bush fires in southern Turkey, it is unlikely that Erdoğan can afford another risky foreign policy blunder.

While Turkey has strengthened its borders and refugee policy towards the incoming Afghan refugees, the European Union is also pressuring Turkey with monetary incentives to contain any rush of refugees to European borders. The money could alleviate some of the pressure that the AKP feels, primarily as they draw closer to the 2023 election where Erdoğan and the AKP’s position in government is growing less and less tenable. Securing another term on Turkey’s 100th anniversary is an important milestone for Erdoğan’s legacy.

Turkey finds itself with fewer allies and friends. Unilateral actions in Syria, Libya, and Azerbaijan highlight a foreign policy direction that is increasingly reactionary and opportunist. Turkey’s pursuit of a stabilising and and mediating role in Afghanistan appears to be another pipe dream – the risks by far out way the benefits.

The international community has yet to decide how to deal with the new Taliban regime and should view Turkey’s pursuit of relations with the Taliban with caution. Turkey may find itself dragged into a costly military engagement and isolated once again for the sake of economic opportunities and trying to bring itself into the good graces of allies and friends it has previously cast aside.

Previous Article
Rich, hot and popular: the taming of Chinese celebrities
Next Article
Japan’s nuclear identity and the complicated endgame

Coronavirus in conflict: The fight has hardly begun

Covid-19 has brought wealthy nations to their knees. What will happen when the virus breaks out in a war zone?
Shaun Cameron 22 Sep 2021 10:00