China’s approach to aid has the potential to shake up a staid international humanitarian system. 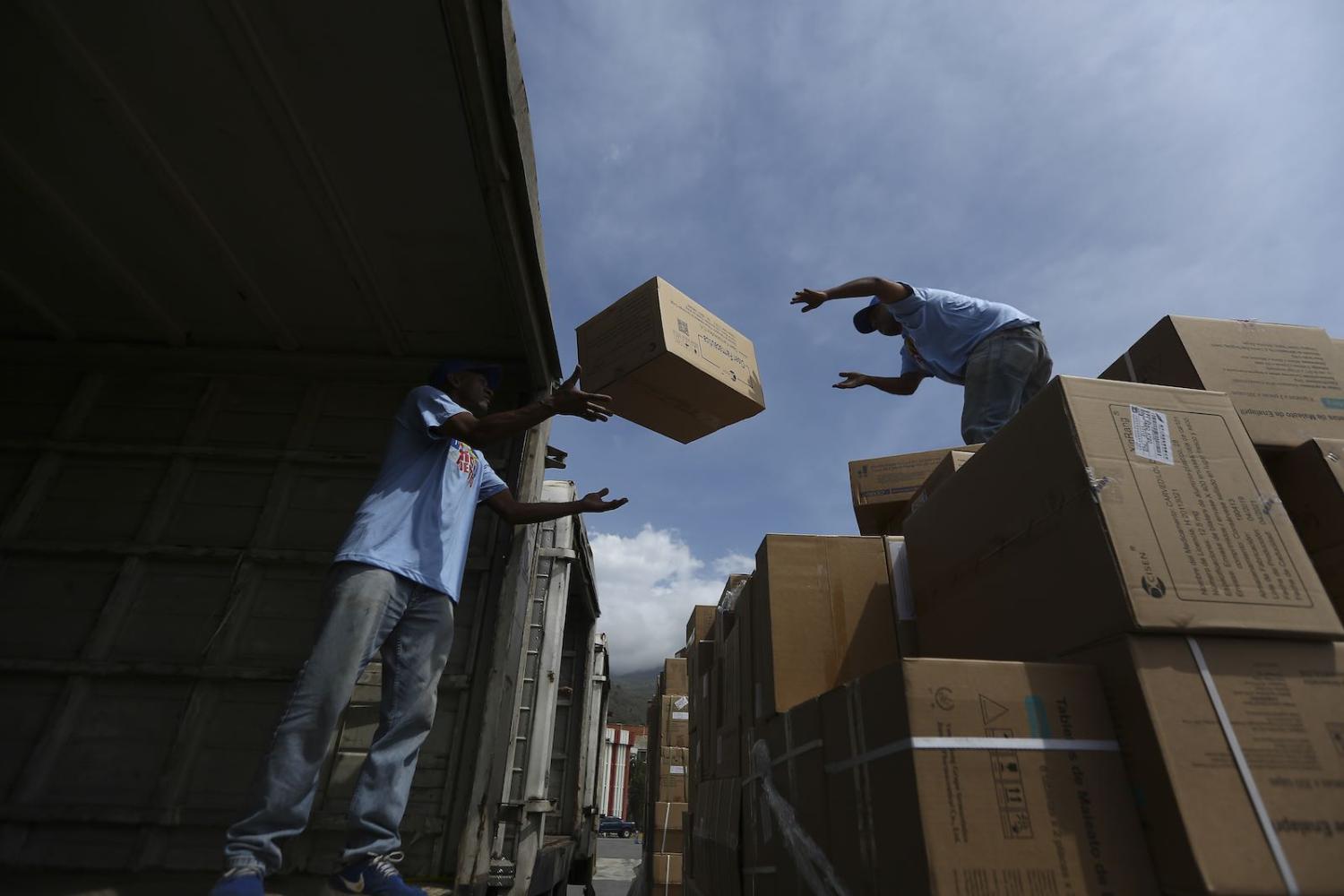 A delivery of 269 tons of medicines and surgical equipment from China arrives in Caracas, Venezuela, 27 May 2019 (Ramses Mattey/NurPhoto via Getty)
Published 1 May 2020

China’s role in the outbreak of the biggest pandemic since 1918 – both in terms of how it started and how China managed its response – has come into global focus. China is sharing what it has learned and assisting other countries to manage their own response. Its actions are being met with both accolades and criticism.

At the centre of this issue are questions around China’s relationship with the World Health Organization (WHO), the UN international public health agency – whether it acted with appropriate urgency and transparency regarding the coronavirus outbreak, as well as whether China exercised undue influence in WHO assessments of the coronavirus outbreak. These questions, whatever their merit, suggest a broader anxiety about how China operates within the international system.

In this context, it is useful to understand how China engages in international humanitarian action, what its strengths are, and where there might be opportunities for cooperation.

China conducts foreign aid differently to Australia and other larger humanitarian donors such as the US, the UK, and the EU, established donors that contribute the bulk of funding, expertise, and policymaking which guide response efforts in major disasters and complex crises requiring humanitarian intervention. Major humanitarian operations are coordinated in conjunction with UN and NGO partners and funded according to consolidated assessments and financial appeals.

China tends to provide a large proportion of its humanitarian aid bilaterally, rather than through multilateral and civil society partners. It also tends to coordinate more bilaterally, instead of through international mechanisms. Its contributions are ad hoc, whereas other larger donors tend to have public policies and more predictable funding. Over the past 10 years, China’s annual humanitarian contributions have varied from just US$1 million to US$129 million. At its largest annual contribution in 2017, China provided less than 1% of total reported humanitarian funding.

While China has a number of foreign policies that influence its humanitarian aid, it does not have an established public humanitarian policy beyond the obligation to provide humanitarian assistance. This might be explained in part by China’s approach not to differentiate between humanitarian and development assistance, another distinction from established donors, who generally draw a line between emergency relief programs and long-term development projects. And if China’s operations are not clear, it is because there is less data publicly available on China’s humanitarian aid compared to larger international donors.

China does have extensive domestic expertise to draw upon, which is highly valued by nations experiencing catastrophic emergencies. Prior to Covid-19, it has been particularly known for its urban search and rescue and rapid response capabilities. Chinese NGOs, furthermore, are recognised for their experience in managing disaster preparedness, response, and recovery.

The Asia-Pacific has been a significant beneficiary of China’s humanitarian aid, with 35% of China’s funding directed to the region over the past decade. The Chinese government is active in regional forums – for example, signing a memorandum of understanding with ASEAN in 2014 to build disaster response capacity and co-hosting the 2015 ASEAN Regional Forum Disaster Relief Exercise.

Chinese NGOs, although an integral part of China’s domestic disaster management system, are relatively new to international humanitarian aid. In emergency settings, they often work through Chinese companies and Chinese diaspora in-country to establish local operations. Chinese NGOs do, however, see value in greater engagement with the international system to better understand it and its underpinning values and approaches.

China’s alternative approach to humanitarian aid has the potential to play a disruptive role in the international system – which presents both challenges and opportunities. If leveraged well, it could shake up a staid international humanitarian system struggling to localise humanitarian response, strengthen links with development, diversify resources, and increase efficiency.

This difference in approach could be particularly relevant to crisis response during the Covi-19 pandemic. For example, international humanitarian personnel have been prevented from entering Vanuatu following Tropical Cyclone Harold, for fear of importing the virus, which has forced a more localised response to the cyclone. It has also highlighted the importance of coordinating with China. A plane with Australian relief supplies for the cyclone response was initially unable to land in Vanuatu due to the presence of a Chinese plane delivering medical supplies for the pandemic.

The scope of China’s humanitarian efforts has been explored in a paper co-authored by Humanitarian Advisory Group, the International Council of Voluntary Agencies, the Innovation Center for Risk Governance at Beijing Normal University and Dr Denghua Zhang.

What is clear from this research is that governments have an opportunity to engage productively with China and leverage its alternative approaches to strengthen international humanitarian action. However, while it is a chance to address long-standing shortcomings in the international humanitarian system, it remains to be seen whether such engagement can be achieved in the current geopolitical context – and whether governments will even try.

China has tried to bypass regional strategic and ideological divides by both preserving its ties with Iran and getting closer to Saudi Arabia, Egypt and Israel.
Manoj Harjani 31 May 2021 06:00

Macron’s credibility as a voice for Europe is high and demands recognition by world leaders, including Xi Jinping.