The Southeast Asian nation is slowly emerging from months of lockdown but has plenty of challenges yet. 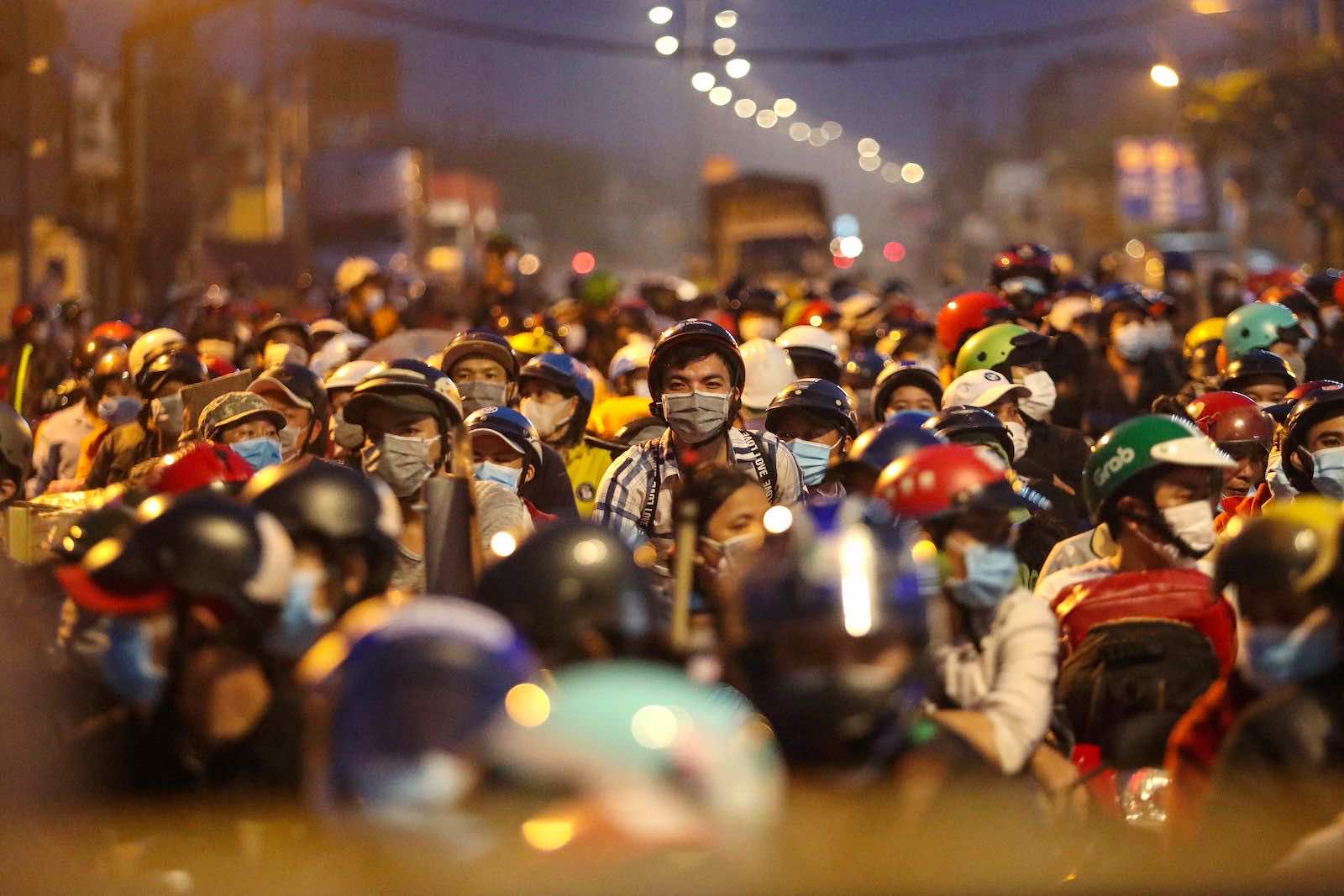 People planning to return to their hometowns wait at a checkpoint to leave Ho Chi Minh City in the early hours of 1 October (Chi Pi/AFP via Getty Images)
Published 13 Oct 2021 12:00   0 Comments

Ho Chi Minh City and the wider south in Vietnam finished its 24-hour-a-day Covid-19 lockdown of three months last week, allowing people to venture out to buy food rather than wait for soldiers to coordinate deliveries to their homes. Soldiers had manned barricades between precincts as part of social distancing orders known as Directive 16, leaving a populace bored at home to share memes of grandmas in pyjamas and plastic sandals crawling under, over or around the obstacles.

Bars remain shut, but gyms are open and some domestic flight paths are resuming. Workers locked up in dorms are flooding back to their home provinces in droves, clogging roads that were empty only days ago, creating further worries of virus spread.

One of the most talked about stories of the exodus comes from footage of an older couple sharing a motorbike loaded with their possessions, as well as four adult dogs and 11 puppies. The sweet video was shared across Facebook as the two drove to Ca Mau province in the south. However, the ending has provoked outrage: the couple was tested and came back positive for Covid-19, and their dogs were killed over fears they could carry the virus.

Despite a vaccination rate still relatively low overall, the south of the county has decided opening up is the better idea after daily cases numbers receded.

Vietnam has struggled as the Delta variant of the virus has taken hold. In the centre of the country, Da Nang had been preparing to welcome tourists before Delta arrived and plunged it into its own harsh lockdown in August. Some districts reported price hikes, lack of decent food deliveries, and general profiteering.

Da Nang had long been recognised as one of Vietnam’s better run and clean cities, with a famous former mayor Nguyen Ba Thanh remembered for his corruption crackdowns last decade. Now, general government inefficiency has been driving some mad. As one expat cooped up for three months in Da Nang wrote at the end of August:

After 10 days of lockdown, the price gouging started. People could order combo packages of vegetables and meat through the ward, but they take four to five days to deliver. The prices of these combo packages have risen higher and higher. Meat is a luxury that ordinary people struggle to afford…people in my part of the city have gone from merely tired and angry to desperate and angry.

Despite a vaccination rate still relatively low overall, the south of the country has decided opening up is the better idea after daily cases numbers receded. There were two peaks, in July and then September. Hanoi, in contrast to Ho Chi Minh City, has remained partially open and by late September construction was allowed to begin again.

In May last year I wrote in The Interpreter that Vietnam seemed to have defied the odds on Covid-19. With the bird flu H5N1 experience from the mid-2000s and a large border with China, Vietnam knew to respond quickly.

At the time of writing then, deaths from Covid-19 in Vietnam stood at fewer than 300. These numbers were verified by Reuters, which called over a dozen funeral homes and found they were down as restrictions meant fewer traffic accidents.

Currently, according to figures from the World Health Organisation, the death toll is more than 20,000 out of almost 840,000 cases, in a population of 98 million with Ho Chi Minh City making up more than 75 per cent of the death toll.

A month ago, Vietnam still had one of Southeast Asia’s lowest vaccination rates, trailing the per capita numbers of not just Thailand but also Laos and Cambodia. Now, just over 15 per cent have had both vaccination doses.

If the one-party communist state ran opinion polls, after a series of crushing defeats in the years before it would have scored a record in 2020.

But despite the virus taking hold in the months since, one of the most salient facts was that the government got it right in the early response, something even the perpetual cynics had to admit. After years of frustrating mismanagements despite a growing economy, Vietnam’s government had done them proud and its GDP in 2020 made it one of the few nations globally to record economic growth, of 2.9 per cent.

If the one-party communist state ran opinion polls, after a series of crushing defeats in the years before it would have scored a record in 2020.

A year later, and not so much. Endless stories in the press about hard-working self-sacrificing soldiers are now just dismissed as propaganda. Annoyance about the mismanagement of the Delta variant is high.

There now appears to be a growing sense of unease that the government was late ordering its vaccine doses, possibly hoping a glut on the market would bring down prices; instead the GDP fell six per cent in the most recent quarter.

In the meantime, the workers needed for the restarting economy in the nation’s largest industrial hub around Ho Chi Minh City are not there. Photos shared online document roadside stands with free water and food for those returning along the highways.

State media is reporting that there are already fears of a labour shortage, which may be ironic given one of the reasons for the lockdown lifting after a plateau of new cases was to keep manufacturing ticking over.