Vietnam defies the odds on Covid-19

Quick action by the government has helped prevent widespread infection – and turned the tide of public distrust. 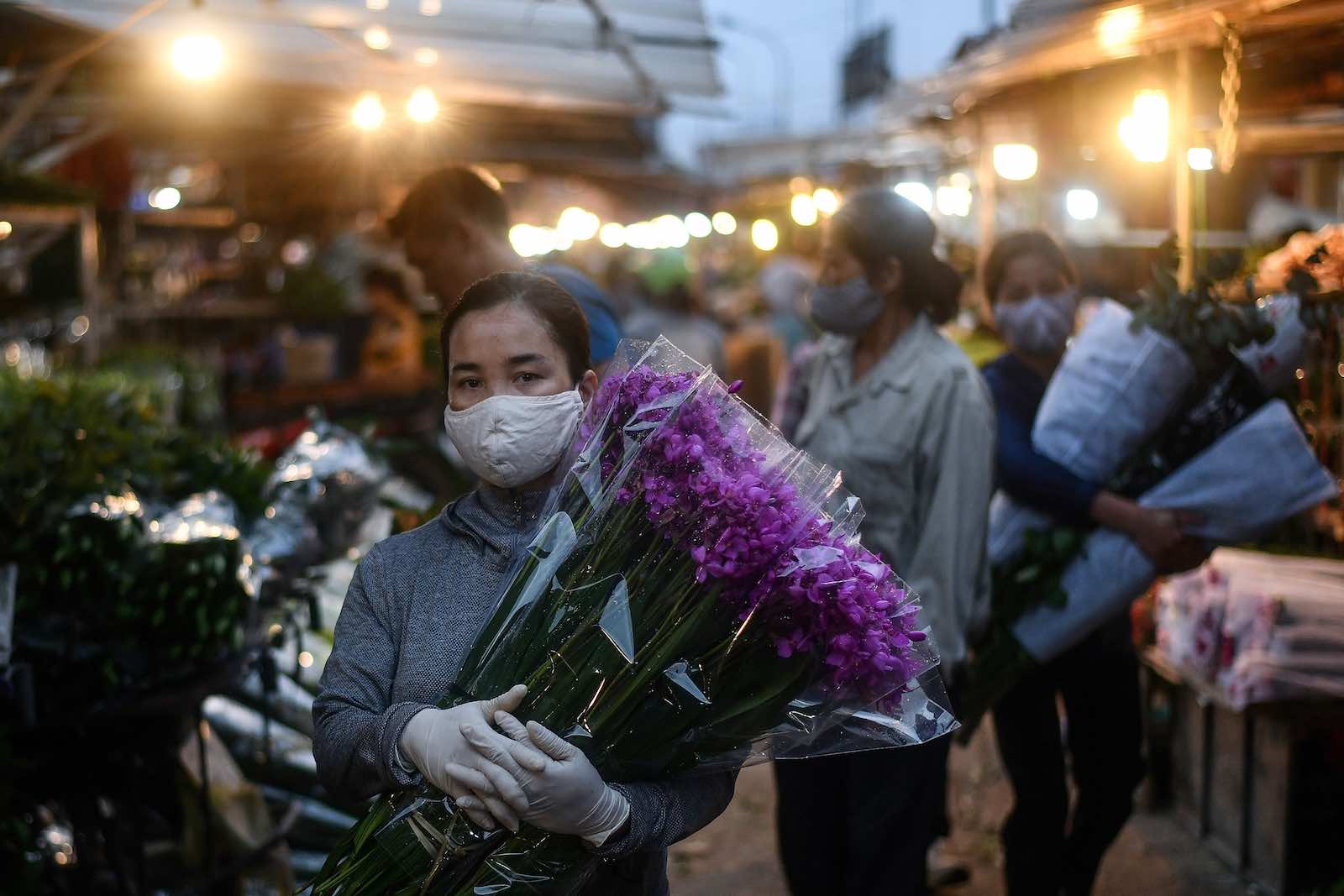 A woman carries flowers at the Quang Ba flower market in Hanoi, 11 May (Manan Vatsyayana/AFP via Getty Images)
Published 12 May 2020 06:00   2 Comments

If you want to see real Olympic-level panic-buying, head to a Vietnamese supermarket a week before Tet, or Lunar New Year.

Yet when the coronavirus broke out in China, Vietnam, with which it shares a border, there was only an hour or two of panic-buying before things settled down to normal.

Vietnam has come out of Covid-19 lockdown, and schools have restarted after being closed all year. The economy is restarting, and there’s hope the country could escape the worst economic ravages, or even benefit from plans to diversify manufacturing away from China.

This is a nation that took three goes just to institute a motorbike helmet law people would actually pay attention to.

There are fewer than 300 reported Covid-19 cases, and no reported deaths. International press coverage of Vietnam's efforts has been broad and generally effusive – not something the regime has seen much of for some years, after cycles of corruption scandals and crackdowns.

This is a nation that took three goes just to institute a motorbike helmet law people would actually pay attention to. After two failed attempts, the leadership got serious in 2007, although even then citizens were more interested in appearing to follow the law, and the cheaper plastic domes on sale for 50,000VND (US$2.50) would save riders from a fine but not an injury.

It’s often easy to suggest in Vietnam that numbers are incomplete or made up, given it is a one-party state with no real free media and prison times for those who post incendiary things online or protest in the streets. However, the usual rumour mill is largely quiet.

Reuters recently published a lengthy piece detailing Vietnam’s efforts, from early border and school closures to sustained contact tracing. The reporters called a dozen funeral homes to check if business is booming. It isn’t. As with elsewhere, numbers have dropped as lockdowns have meant fewer traffic accidents.

These public health experts say Vietnam was successful because it made early, decisive moves to restrict travel into the country, put tens of thousands of people into quarantine and quickly scaled up the use of tests and a system to track down people who might have been exposed to the virus.

On the other hand, the story illustrated a frustrating opacity, with no health officials available for interview.

According to one foreigner who’s been in Hanoi since the mid-2000s, “everyone seems in awe of the government”. Indeed, the often-cynical expats are now praising the nation’s efforts, grateful they live in Hanoi or Ho Chi Minh City and not back home, even if they still complain people are putting masks but not helmets on their small children riding pillion.

Vietnam’s multilingual contact-tracing program lists all the places each diagnosed patient has been since contracting the virus – down to the addresses, for example, of street-side barbecued eel and noodle joints, after one particular eel-loving patient had picked it up at a St Patrick’s Day party in Saigon, one of the later virus clusters.

The fear in Vietnam in the years since the doi moi economic reforms took hold has been that the nation was losing its character, becoming too money-hungry while losing the sense of community and patriotism that enabled the North’s mid-century victories against the French, Americans, and Chinese (although it’s important to note that the country, which just saw the 45-year anniversary of the Fall of Saigon and end of the war, doesn’t call the last run-in a “war”).

That fear is not a new feeling.

Author Ho Anh Thai, a former diplomat and author, wrote about the nostalgia for a more idealistic time in his 1991 novella Behind the Red Mist, via 17-year-old Tan, who is somehow transported back to the war years, meeting his then-young parents for the first time. Tan, growing up in peacetime, feels strangely dislocated but finds a sense of purpose in Hanoi’s early war years.

That nostalgia was resurgent three years later, during the lengthy mourning and funeral for General Võ Nguyên Giáp, architect of the French defeat at Dien Bien Phu in 1954, when young people raised on not much more than facts and figures about the war thronged the streets in quiet lines to pay their respects to a hero whose power within the Party waned decades before they were born.

In 2016, I wrote about Vietnam’s fish kill saga for The Interpreter after a toxic spill from a Taiwanese steel mill poisoned waters, put fishermen out of work, and left 100 tons of dead fish lining the beaches across four northern provinces:

Almost every worry in modern-day Vietnam is represented in the fish kill saga... Many of the bigger issues that worry the populace, and the government, are present in this round of protests. For the people, these include the management of foreign investment, environmental protection and food safety. The government's major concern is staying a few steps ahead of a growing civil society that is organising online.

After a Formosa company executive told a local newspaper that people would have to choose between modern industry or fish, Vietnamese used Facebook to “choose fish” in a watershed moment of mass protest.

“The government's reluctance to blame Formosa has irritated people deeply. This government sells itself on its ability to manage problems clearly and smoothly; in this case that has not happened,” I wrote just under four years ago