The idea was to chart future goals. Looking back, has the global ambition from the “Australia 2020 Summit” stacked up? 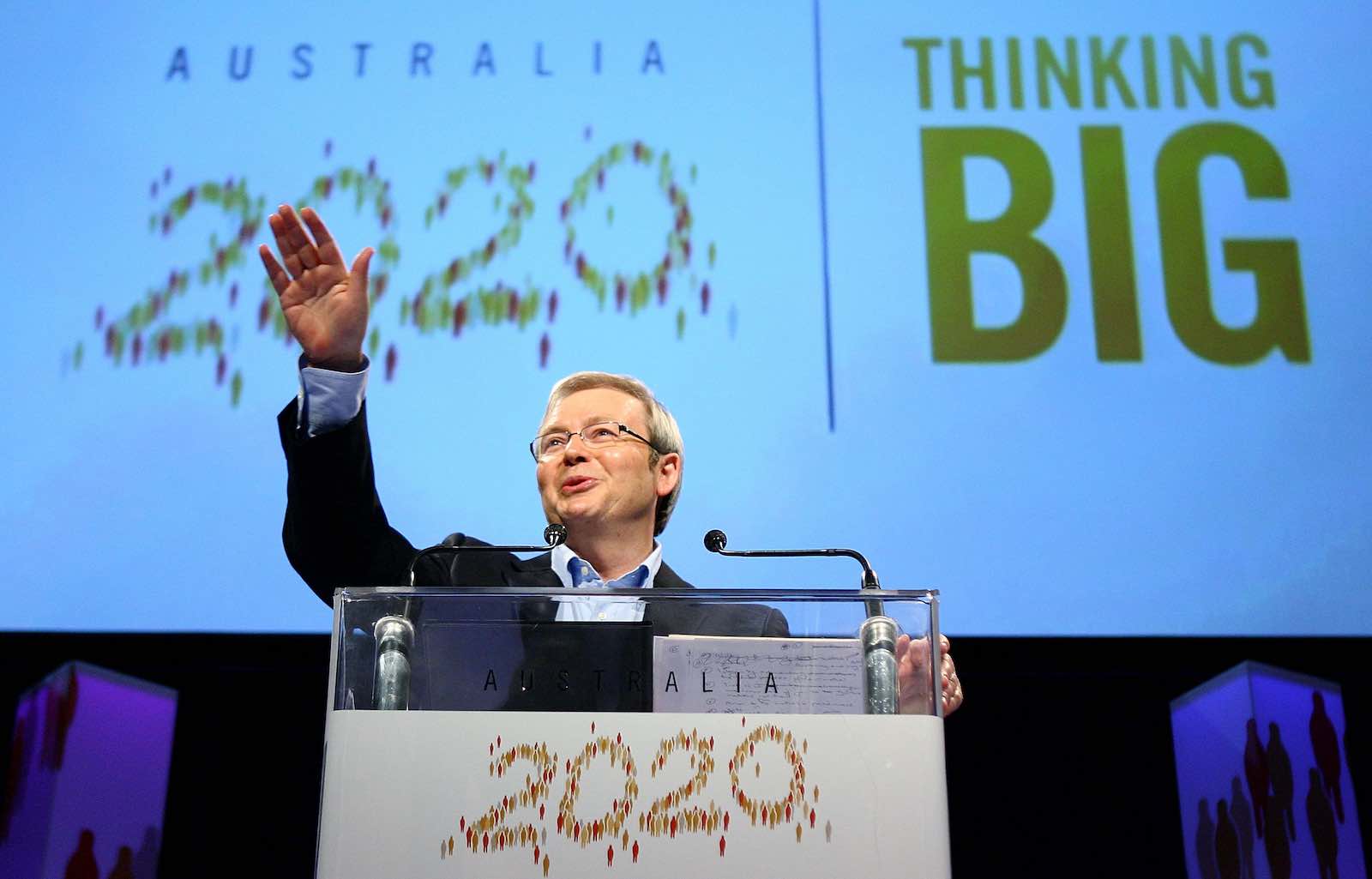 Back then it was less a date and more an aspiration. This week, 12 years ago, a thousand of the nation’s best and brightest gathered in Canberra for newly-elected Prime Minister Kevin Rudd’s Australia 2020 Summit. The goal was to harness ideas to shape a long-term strategy for the nation to 2020, a year now all too much with us. Looking back, has Australia been able to achieve its vision?

The summit covered a wide range of areas across 10 streams, but the focus here is the topic “Australia’s future security and prosperity in a rapidly changing region and world”, co-chaired by Professor Michael Wesley and then Foreign Minister Stephen Smith. The 100 stream participants agreed three key ambitions:

Judging Australia’s record as an effective global citizen is somewhat subjective. The Summit’s recommendation to assert leadership in global governance focused on international institutions, nuclear disarmament, peacebuilding, and gender equality. There has been some progress in each.

Australia has served on the UN Security Council (2013­–2014) and is currently on UN Human Rights Council (2018–20). Australia has also contributed to building the G20 as a global governance mechanism and formed a middle power coalition through the group known as MIKTA (Mexico, Indonesia, South Korea, Turkey and Australia).

Australia could be faulted for the severe cuts to Australia’s aid program and diplomacy, now at its lowest-ever, which has limited what it can achieve internationally.

While Australia did not support the Treaty on the Prohibition of Nuclear Weapons, it played an important role in the Arms Trade Treaty on conventional weapons.

Australia has continued to support peacekeeping, including its leadership of the 14-year Regional Assistance Mission to Solomon Islands. An Australian Civilian Corps was announced in 2011 to deploy civilian specialists to developing nations in times of conflict.

Australia includes gender equality as a foreign policy aim and since 2016 a Gender Equality and Women's Empowerment Strategy has applied across all the Department of Foreign Affairs and Trade’s work.

The contribution on other global challenges is difficult to judge. Australia could be faulted for the severe cuts to Australia’s aid program and diplomacy, now at its lowest-ever, which has limited what it can achieve internationally. On climate change, at least two former foreign ministers – Rudd and Julie Bishop – have called on Australia to show greater global leadership.

Over the last 12 years there has been clear recognition of Asia’s rise and significant deepening of Australia’s regional engagement.

Australia has signed free trade agreements with ASEAN (2010), Malaysia (2013), South Korea (2014), China and Japan (2015) and Indonesia and Hong Kong (2020). While the Summit ambition to have trade agreements with every country in the region has not been achieved, Australia is also part of two major regional agreements: Comprehensive and Progressive Agreement for Trans-Pacific Partnership and the negotiations for a Regional Comprehensive Economic Partnership. A recommendation from the 2020 Summit to establish a Pacific labour mobility scheme was piloted in 2012 and now covers 10 countries.

Seven of Australia’s top 10 trading partners are in Asia and there has been a substantial increase in inbound investment. Asia’s resource demand was vital to Australia’s 28 years of uninterrupted growth. Some service sectors have also benefited from Asia’s rise, with international education and tourism in Australia’s top five export industries. However Australian investment in Asia has continued to lag with only three of Australia’s top 10 destinations in Asia, with New Zealand receiving more investment than the whole of Southeast Asia.

Mainstreaming of Asian languages and cultures

Have the region’s languages and cultures become less foreign and more familiar to Australians as Summit participants hoped?

Travel has been an important vector, prior to the coronavirus crisis, with eight of Australia’s top 10 tourist destinations in the Asia-Pacific region. Demographics have assisted with an estimated 12% of Australians having Asian ancestry, although Asian-Australians remain underrepresented in senior leadership positions.

But language learning remains Australia’s Achilles’ heel. The Summit goal of 60% of Australians speaking a second language by 2020 has not been achieved. While the National Asian Languages and Studies in Schools Program was announced in 2008, this was discontinued in 2012 and its target of 12% of year 12 students graduating with fluency in one of four key Asian languages was never met. Since 2008 the proportion of Year 12 students studying Asian languages has only increased very slightly for Japanese and Chinese, with Indonesian languishing.

More progress has been made on the 2020 Summit goal of promoting regional literacy and understanding. Asia literacy was enshrined in national education policy through the Melbourne Declaration on Educational Goals (although less so in its successor) and was central to the Gillard government’s Australia in the Asian Century White Paper. High school twinning links almost 2000 schools across 21 countries, while at tertiary level, the New Colombo Plan launched in 2014 has enabled 60,000 young Australians to experience living, studying and working in region. In 2013 Asialink Business was established as Australia’s National Centre for Asia Capability to build the workforce’s Asia awareness, knowledge and capabilities.

Programs for artistic exchange have been pioneered by Asialink Arts and bolstered by the Australia Council for the Arts. Programs such as the Asia Pacific Triennial at the Queensland Art Gallery and Gallery of Modern Art have continued to flourish. Festivals such as OzAsia Festival, Darwin Festival, Mona Foma, Adelaide Festival, Melbourne International Arts Festival, Sydney Festival, Perth Festival and Asia TOPA bring extraordinary artists from the region to Australian audiences, while mainstream events from film festivals to comedy festivals feature Asian programming.

Coming down from the peak

What would the 100 participants in the 2020 Summit stream think of where we are today? Fair to say pleased with progress in some areas and disappointed in others. The trajectory of Australia-Asia engagement has trended upwards, apart from language learning and investment.

The question is whether the start of 2020 will come to be seen as a peak. The immediate effect of Covid-19 has been to halt Australia-Asia engagement in its tracks. Internationally-oriented industries have been hit hardest, including tourism, international education and export industries. Travel is now severely restricted, limiting people-to-people contact and exchange. International aviation may not recover quickly, meaning that the age of easy connections with the region might be over.

Australia’s future security and prosperity remains inextricably linked to Asia. Even if it is more difficult, engagement with the region will remain a crucial task.

* Melissa Conley Tyler was a participant in the Australia 2020 Summit.