Weekend catch-up: Trump's first 100 days, modern Anzacs, where to for Nauru and more 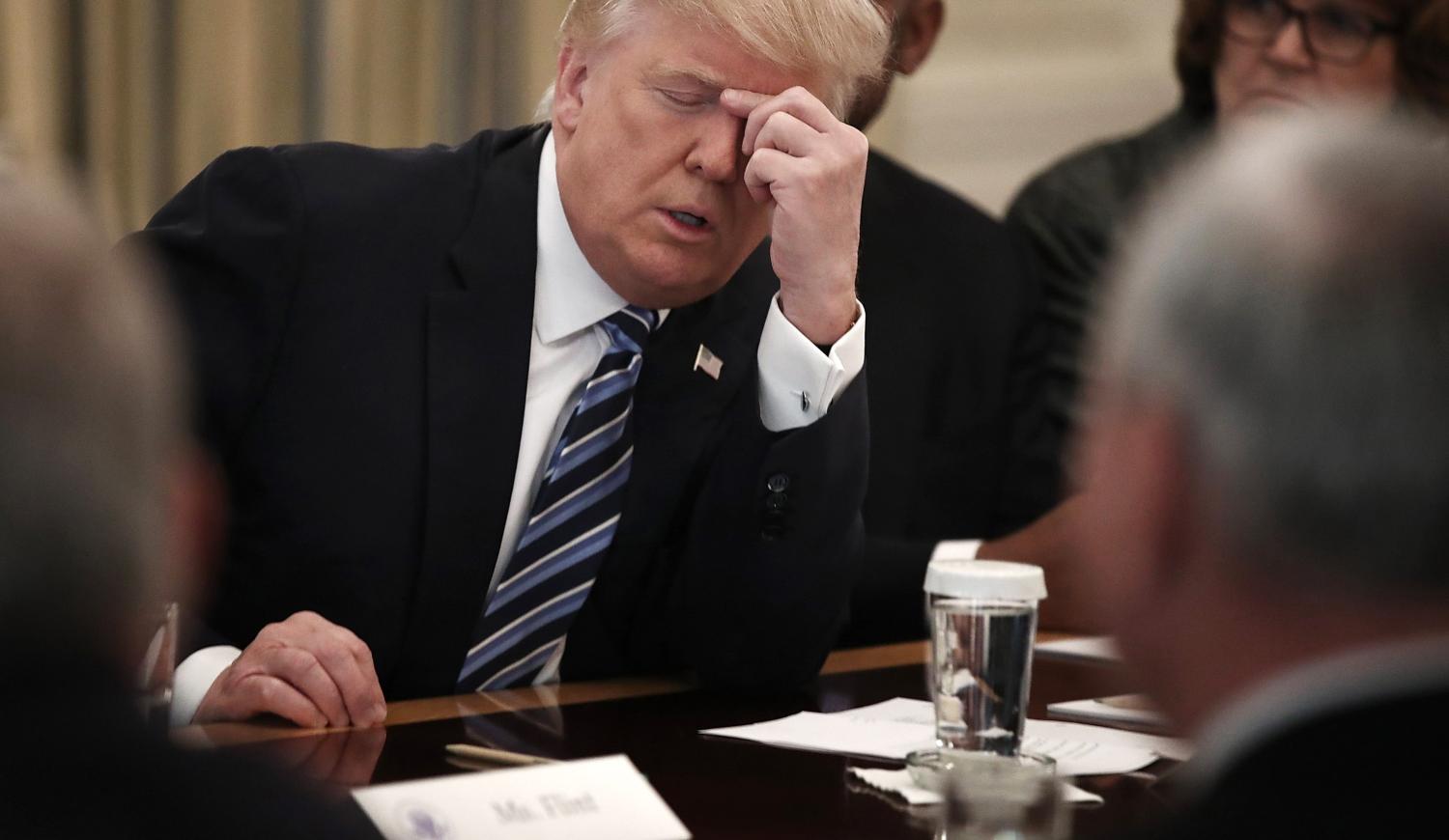 At precisely 1:47am on Monday morning, Donald Trump will have been US President for 100 days – accordingly we've updated our timeline of Lowy Institute research, Interpreter articles, opinion pieces, events and interviews about the Trump Presidency.

But what to make of the 100-day mark? It's too early to judge quite yet, argued Sam Roggeveen:

The region hasn't yet faced a real crisis during Trump's term, and Trump himself has not faced a big decision point on Asia policy. Then there is the stark fact that the forces arrayed against a business-as-usual Trump presidency are getting stronger, mainly in the form of a rising China, which wants to erode US strategic primacy in the region. But there is also the fact that within Trump's first term North Korea may well gain the ability to strike the continental US with a nuclear-tipped missile, which would drastically erode America's position not only vis a vis North Korea, but also with its allies South Korea and Japan.

Euan Graham made three observations about the sharp rise in US-North Korea tensions:

For now, Kim has opted not to escalate beyond ICBM launcher parades and missile tests. But it is only a matter of time until the next nuclear trial. The most destabilising outcome from the current tensions would be if Kim concludes, as well he might, that Trump's bluff can be called, consequence-free.

But it's not only the US being tested. David Kelly and Joost van Deutekom on whether China can keep the regional peace:

Xi's tacit reassurances to the US must now extend to Australia. Otherwise, Li Keqiang's claims that Australia 'should not pick between the US or China' fall to the ground. Can Beijing act as a guarantor of regional security and stability? North Korea may provide the litmus test.

Unlike its missile and nuclear programs, which North Korean leaders proudly parade and test, Pyongyang denies it possesses chemical weapons. North Korea is not a state party to the Chemical Weapons Convention, which bans the production, possession and use of chemical weapons. It therefore has never had to declare its facilities, nor had inspectors on the ground.

Rodger Shanahan recounted his experiences of Anzac Day throughout and beyond his service in the Australian Army:

As well as remembering the horrors of and sacrifices involved in past wars, on Anzac Day it is worth spending just a little time thinking about the tasks we may call on our present and future service members to perform. In the next quarter-century the groups that gather to recall their own operational service will, like my own cohort, undoubtedly talk of places and tasks that either didn't feature in the current strategic guidance, or only as a least likely scenario. Lest we forget.

This week China launched its second aircraft carrier (though it will require several years of testing and training before it can enter service). Sam Roggeveen:

China's carrier program is thus symbolic of the power shift in the Asia Pacific. Short of an economic or political crisis in China, this shift probably can't be stopped; it can only be managed. The response of regional military forces to China's naval shipbuilding program will offer an important indicator of how that management is taking place.

Last week's gubernatorial election in Jakarta established Anies Baswedan as a potential contender for the presidency in the 2019 Indonesian elections, despite the fact that he belongs to the same party as 2014 presidential candidate Prabowo Subianto, who may well desire to run again. Matthew Busch:

Prabowo may want a rematch with Jokowi, but there’s no reason that Baswedan must toe the line. Such an assumption also overlooks a host of other factors yet to be determined, including health, electoral rules, and campaign funding. The latter is particularly important, especially following the heavy costs of his 2014 defeat. Should Jokowi remain popular, the costs of funding another campaign which Prabowo would probably lose may prove too much and create openings for other contenders.

While Emmanuel Macron may be slated to win the second round of the French presidential elections, characterising his victory as a success for the establishment would be a terrible mistake, argued Matthew Dal Santo:

The danger is that, if he wins the 60-odd per cent of the second-round vote he’s projected to, Macron and the international media establishment that by and large shares his worldview will be sorely tempted to claim that France has led the world in rejecting 'populism' (or whatever the dissent towards the social and economic orthodoxies of the past two-and-a-half decades is currently being called). Both Berlin and Brussels are already lining up to hail him as saviour of Europe.

But how many French voters actually sign up to his view of the world?

Denise Fisher on what the election means for residents of New Caledonia, and other French territories in the Pacific:

Both Macron and Le Pen claim to support the Noumea Accord and its prescribed referendum process. But neither have a proven record nor party structures that can deliver a majority in the National Assembly elections. So there is likely to be a term of 'cohabitation', with the French President heading a party different to that of the Assembly majority. Circumstances are certainly different now, but it’s worth remembering that in the past, such a situation has been detrimental to advancing sensitive issues relating to New Caledonia.

Former High Commissioner to the UK Richard Alston wrote on the political opportunity that's been afford to British Prime Minister Theresa May:

Suu Kyi's supporters are right to point out the complex problems she inherited a year ago, and to remind us that she has no control over the Tatmadaw, which is responsible for security operations in Myanmar. And yes, she needs to take into account popular sentiment, while maintaining a modus vivendi with the armed forces, in order to implement much-needed and long-awaited reforms. As she has said herself, she is a politician, not an icon, and that means making 'principled compromises'.

However, Aung San Suu Kyi's failure to show greater moral courage and demonstrate political leadership on a critical issue like the Rohingyas cannot be sheeted home to the armed forces, her party or anyone else. For that, she alone must take responsibility.

The booing of Ivanka Trump at a panel event in Germany when she defended her father's record made headlines across the world - but it's the substance of that panel and the summit it was a part of that should really be making the news, wrote Susan Harris-Rimmer:

Only the impotent are pure, as Gough Whitlam said, and the W20 was the lead story in almost all print, social and broadcast media. The combined power of beauty, politics and celebrity is extraordinary, if utterly depressing to witness firsthand. Will that exposure translate to more support for the W20 agenda?

As a request from Canberra to observe the Malabar naval exercises between the US, Japan and India reportedly goes unanswered by New Delhi, it's worth considering why India may not consider a revival of the 'Quad' to be in their immediate interests, argued Abhijit Singh:

India's naval planners know well that the 2017 Malabar is going to be controversial, not least on account of the presence of Japan's largest helicopter carrier, Izumo. Inviting Australia to join the exercises would almost certainly cross Beijing's tolerance threshold, triggering a backlash that New Delhi might find hard to contain.

And finally, Cait Storr wrote on what Nauru's economic future might look like once Australia's detention regime begins to wind down:

The economic uncertainty that faces Nauru when offshore detention inevitably ceases again is another chapter in the unfolding experiment of statehood that is the Republic of Nauru.

Previous Article
Why Ivanka Trump was the least newsworthy aspect of the Women20 Summit
Next Article
What North Korea and Syria tell us about US primacy: It’s over

The two Communist nations boast low or even zero cases of the virus. What message does this send?
Johannes Nugroho 26 Jan 2022 08:00

Non-alignment has long defined Jakarta’s approach in the world. Neither China’s threats or US pledges will change that.
Alexandre Dayant 30 Oct 2019 11:30