The status quo in the Strait has changed. But is anyone really tuning in as the drama unfolds? 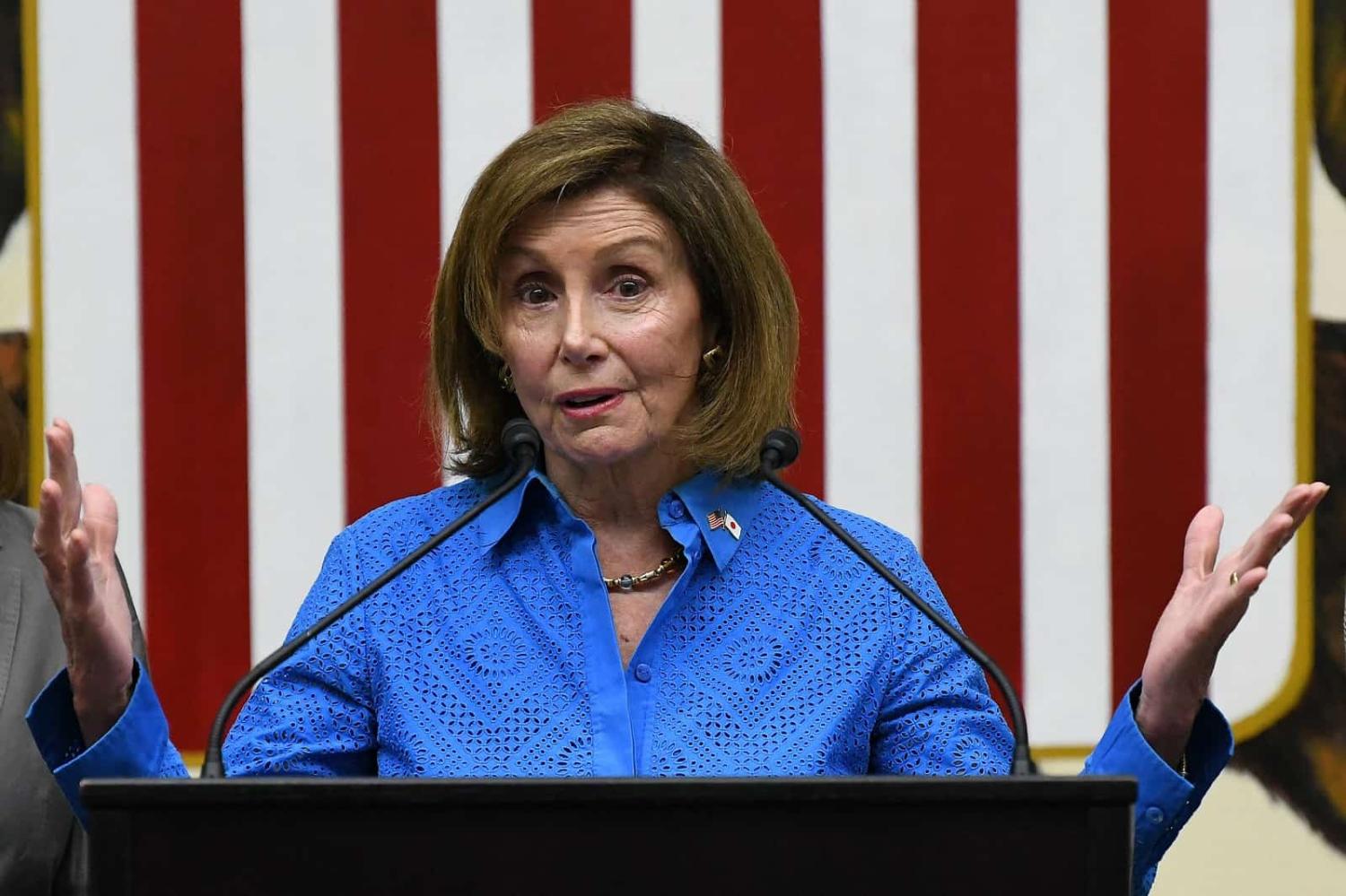 US House Speaker Nancy Pelosi at the US Embassy in Tokyo on 5 August 2022 at the end of her Asian tour, which included a visit to Taiwan (Richard A. Brooks/AFP via Getty Images)
Published 9 Aug 2022     Follow @JohnCulver689

It’s a weird crisis, if it can be called that. Foreign reactions, and even those in Taiwan, to China’s unprecedented military drills in recent days have been a collective yawn. It’s as if the region and world settled in for a new season of a favourite action television series, “Missile Mayhem on the Straits!”, and were underwhelmed: “I mean, the special effects were good, but pretty much the same as season one, and I don’t like the character development … and the US spent the whole episode doing its nails!”

I guess Vladimir Putin has really raised the bar. China’s going to have to kill a lot of people to get any attention. The United States didn’t even have the decency to announce aircraft carrier deployments. Ballistic missiles flying over Taipei (beyond the atmosphere, in space), landing all around Taiwan in what Chinese officials called “blockade drills”, in some cases inside Taiwan’s territorial waters, and drawing Tokyo’s ire primarily because some missiles splashed in Japan’s exclusive economic zone, possibly killing fish … And in the US news cycle, all this was crowded out by Brittney Griner, an American basketball star imprisoned on drugs charges in Russia, the latest about conspiracy peddler Alex Jones, and whether Monkeypox is a pandemic or a sexually transmitted disease (yes).

Perhaps this is strategic genius. Maybe Washington decided that China can’t have the crisis it wants because America refuses to have one.

The overall response by Washington and Taipei amounted to treating Beijing like it will thrash about for a while until exhausted. Taiwan’s Foreign Ministry compared China/Xi to North Korea/Kim, “wilfully test-firing missiles into waters near other countries”. US administration spokespersons were silent most of the first day, until White House spox John Kirby delivered a calm statement in the afternoon in which he said, “China has chosen to overreact”, after which the Q&A moved back to Griner. A later tweet by Secretary of State Antony Blinken framed the, crisis? dust-up?, thusly:

“We call on the PRC not to unilaterally change the status quo by force in the region, and to resolve cross-Strait differences by peaceful means. There is no change in the respective one China policies, where applicable, and basic positions on Taiwan of the G7 members.”

It’s as if House Speaker Nancy Pelosi’s visit never happened. In the US narrative, China just decided to be pissed off, no one knows why.

And apparently the last remaining element of status quo that the administration recognises on Taiwan is non-use of lethal military force by China, followed by a recitation of US fealty to the three communiqués as it chooses to interpret them. “That’s our policy today. Ask us again tomorrow … We actually have no idea what we might do next.” Maybe Senate Majority Leader Chuck Schumer and Supreme Court Chief Justice John Roberts should book their trips now?

Perhaps this is strategic genius. Maybe Washington decided that China can’t have the crisis it wants because America refuses to have one. Admiration of this mental jujitsu must be tempered by the administration’s apparent inability to control US foreign policy. President Joe Biden probably could have stopped Pelosi’s visit, but only at steep political cost mere months before midterm elections in November. Plus, he has rebound Covid, and the image of a sick president railing against the Democratic Party’s Speaker of the House to protect China’s delicate feelings … not happening.

And perhaps China got what it needed, a big strong show for its domestic audience, richly covered on domestic media, that sates nationalistic appetites and will keep things calm through the 20th Party Congress expected in November, when Xi Jinping will begin his third term as leader of everything. However …

The thing is – it feels surreal to say this – this actually happened. China conducted unprecedented blockade rehearsals, for the first time firing missiles over Taiwan, and into waters right off Taiwan’s main commercial ports, without regard to Taiwan’s claimed territorial waters. It flew dozens of fighters over the Strait centreline – long a mutually agreed sensitive area. And it likely will keep doing these things, making such actions the “new normal”.

The People’s Liberation Army hasn’t been a “noisy demonstration army” for 20 years. China now uses its modern, large military and security forces to alter the “status quos” of sovereignty disputes in its favour. When the Philippines sought international arbitration over its South China Sea dispute with China, Beijing responded by building islands, with three military airfields in the Spratlys, creating the new status quo there. When Japan “nationalised” the Senkaku/Diaoyu Islands in 2012 to prevent a right-wing Japanese group from purchasing some of them, China commenced regular coastguard patrols inside the 12 nautical-mile territorial limit, creating a new status quo of “joint administration” it continues to this very day. When India in 2017–18 began to add troops and improve roads near disputed areas of the border, China massively expanded military facilities, airfields, roads and forces, and confrontations there became lethal for the first time in decades.

Denying China the crisis it wanted may work for now, but has also showed how far it could go without risking war – very far indeed.

Whether the United States and its friends, allies and valued non-country partners choose to acknowledge it, the United States, Taiwan and China have accidentally (for Washington’s part) turned the page. Denying China the crisis it wanted may work for now, but has also showed how far it could go without risking war – very far indeed.

I’ve seen very little acknowledging that so many things taken for granted that contributed to peace, commerce and stability on the Strait can now be challenged as China seeks to test how far it can go, in every domain. Not just firing missiles in close-in zones ringing Taiwan, but perhaps fighter aircraft and unmanned aerial vehicles right across it, daring Taiwan to shoot first. Targeting companies even loosely affiliated with the Democratic Progressive Party in Taiwan, perhaps just because they are in the DPP-friendly south. Interrupting Taiwan military resupply of its offshore islands, or even the Penghus.

The coming autumn will bring brisker air, and all concerned will stir and start to realise that the situation fundamentally changed, and the peace some thought would last until 2027, 2049 or forever can change in 24 hours over what seems the silliest of reasons.

Previous Article
ICC pushes probe on the Philippines’ drug war
Next Article
There must be a better way: Australia’s diplomatic appointments

Solomons: How Australia stacks up in a China aid bidding war

Making sense of the known unknowns in the South China Sea

The US doesn’t have to be willing to blockade Scarborough Reef to stop China from building a military base there.
Frances Kitt 6 Apr 2017 14:06

How would a President Moon Jae-in approach North Korea and China?

If Moon Jae-in wins the Blue House, his stance on THAAD will be a good indicator of how much influence China can have over South Korea’s foreign policy.