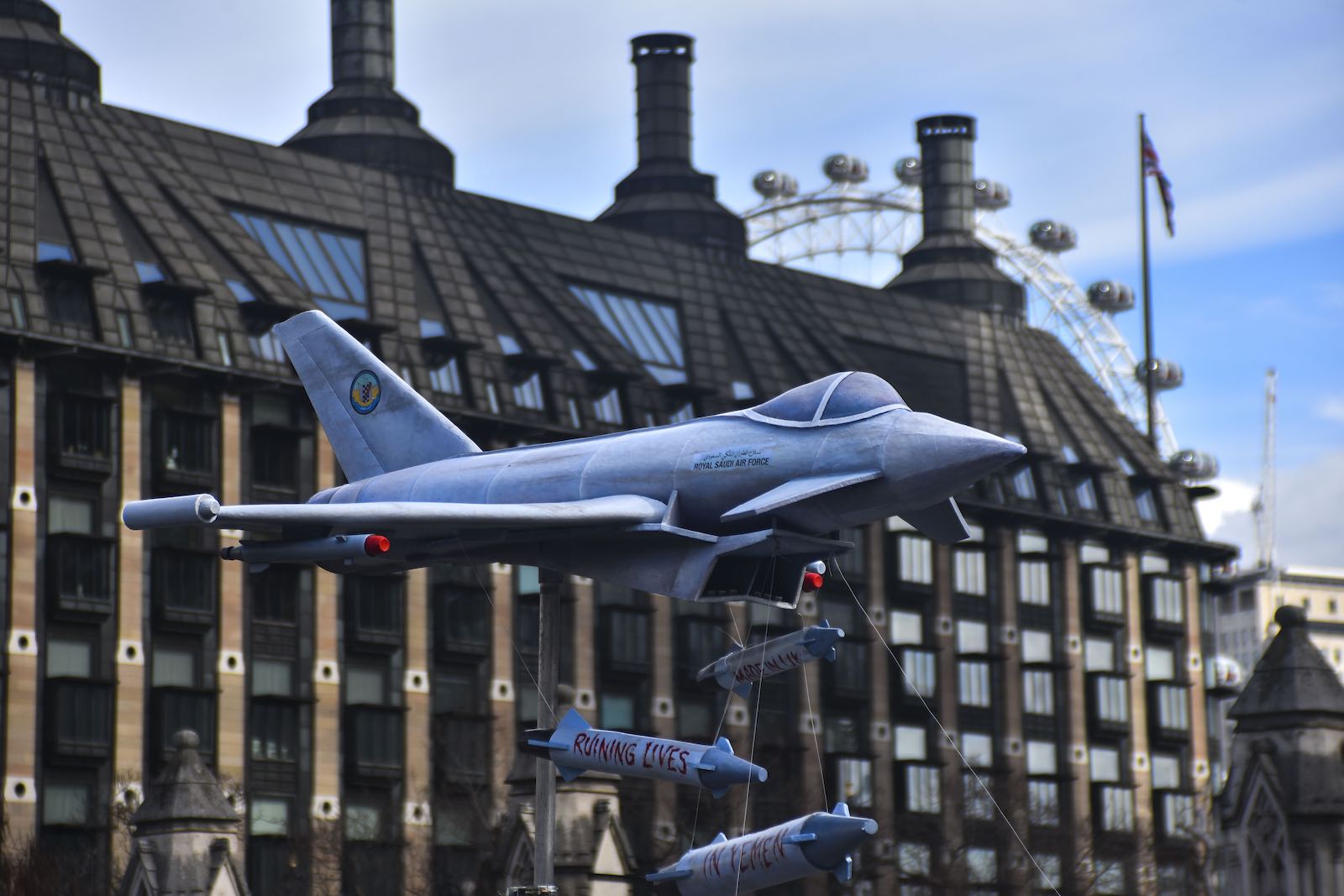 Protests in London in March against the war in Yemen (Photo: Alberto Pezzali via Getty)
Published 17 Jun 2019 06:00   0 Comments

The Australian and British governments continue to support defence exports to Saudi Arabia and the United Arab Emirates – countries accused by the United Nations of committing war crimes in Yemen – despite mounting pressure for Western countries to halt military sales to the Saudi Arabian-led coalition. Over 250 breaches of international humanitarian law have been reported in Yemen and advocacy groups across the world are ramping up efforts to ensure governments bring an end to what is seen as their countries’ complicity in the atrocities committed in Yemen.

In the UK, the NGO Campaign Against the Arms Trade (CAAT) is pursuing litigation to try to force the British government to stop permitting arms sales to Saudi Arabia. Countries such as Finland, Norway, Denmark and Austria have already halted their defence exports to Saudi Arabia due to concerns over the catastrophe in Yemen and amid news of the murder of Saudi journalist Jamal Khashoggi. In Italy, a group of NGOs are running criminal litigation to try to end Italian exports, while in the US, Congress passed a bipartisan resolution to stop American military exports, only to have it vetoed by President Donald Trump.

Of the various actions taking place globally, the UK litigation holds most significance for Australia. Our common law system was inherited from the British. We share similar values of respect for human rights and the rule of law. Could the UK litigation be a blueprint for similar moves here?

In December 2016, CAAT filed a claim for judicial review against the UK Secretary of State for International Trade, the government official responsible for defence export licencing decisions. Judicial review is a legal mechanism that plays an important role in the British and Australian systems of government. It is a means of ensuring public officials are held accountable for the legality of their actions – a check on executive power. CAAT argued that the Secretary of State for International Trade was breaking the law by continuing to export arms to Saudi Arabia when there was a “clear risk” the weapons might be used to commit a violation of human rights or a serious violation of international humanitarian law in Yemen. This would contravene Britain’s export policy, which is enshrined in legislation and must be applied by law.

The case was first heard by the UK High Court in February 2017. In a decision handed down in July that year, the High Court found in favour of the government, concluding that the UK’s export policy was not being misapplied. CAAT appealed from that decision, and the Court of Appeal hearing took place in April 2019.

Meanwhile, outside the court room, the House of Lords Select Committee on International Relations reached the disturbing conclusion in February 2019 that the UK government is “on the wrong side” of international humanitarian law by issuing export licences and selling munitions to Saudi Arabia.

While the world awaits the outcome of the appeal, it is worth noting three points from the High Court decision that explain why that Court found in favour of the UK government.

First, one must understand – somewhat paradoxically – that CAAT’s argument was supported by persuasive evidence which the Court did not find to be lacking in credibility or reliability. This included evidence from UN agencies and NGOs of repeated international humanitarian law violations by the Saudi-led coalition in Yemen. CAAT submitted that this evidence not only suggests but dictates the conclusion that there is a “clear risk” that weapons exported to Saudi Arabia might be used to commit violations in Yemen.

But the High Court rejected CAAT’s argument. The Court found that in addition to the open source evidence available to CAAT, the government had better information from a broader range of sources available to it. This included an understanding and knowledge of Saudi Arabian military processes and procedures, engagement with the Saudi government, and a considerable volume of secret material.

The court considered it was “not possessed of the institutional expertise to make the judgments in question”.

The Ministry of Defence also kept a comprehensive record of all reports it received of alleged breaches of international humanitarian law in a central database known as “the Tracker”. Incredibly – given the UK government’s conclusion on the risk assessment – the Tracker was actually being used to monitor a greater number of alleged international humanitarian law breaches in Yemen than those identified in the NGO reports submitted by CAAT. Yet the Court interpreted this in the government’s favour, finding that it demonstrated the government had a wider range of information sources available to it which made it better placed to make an informed risk assessment.

Second, the High Court’s decision was underpinned by a large volume of “secret” material. This evidence was presented in closed court under national security legislation. The nature of the evidence is unknown. The judgment simply states it provided “valuable support” for the court’s conclusion.

Third, the High Court found that in light of the complexity of the issues and the government’s acknowledgement that it was a “finely balanced decision”, it was appropriate to defer to the executive on the final conclusion of the risk assessment. The court considered it was “not possessed of the institutional expertise to make the judgments in question”. Even an alarming admission in an email from the Head of the Export Control Organisation at the Department for International Trade, Edward Bell, did not change this. Bell wrote that he had advised the Secretary of State that “my gut tells me we should suspend [export licences]. This would be prudent and cautious given the acknowledged gaps in knowledge about Saudi operations”. Yet still the court did not wish to interfere with the government’s assessment.

In the appeal, a key issue was whether Saudi Arabia’s past and present record of respect for international humanitarian law is something the UK must consider when making the “clear risk” assessment. CAAT argued that it is, and that Saudi Arabia’s concerning record of repeated violations of international humanitarian law, particularly in its air campaign in Yemen, cannot be ignored.

While it remains to be seen whether similar legal avenues could be pursued in Australia, the outcome of the appeal will certainly be watched closely, as pressure continues to mount here and abroad to halt military exports to the prime combatants in the devastating Yemeni war.