Skip to main content
COVIDpoll: Lowy Institute Polling on Australian Attitudes to the Coronavirus Pandemic
On this page
This article is more than 2 years old
Polling

The Lowy Institute COVIDpoll finds that almost all Australians say Australia has handled COVID-19 well, but most are disappointed by China and the United States’ response.

By Natasha Kassam
On this page
Key Findings

Australian views on responses to COVID-19 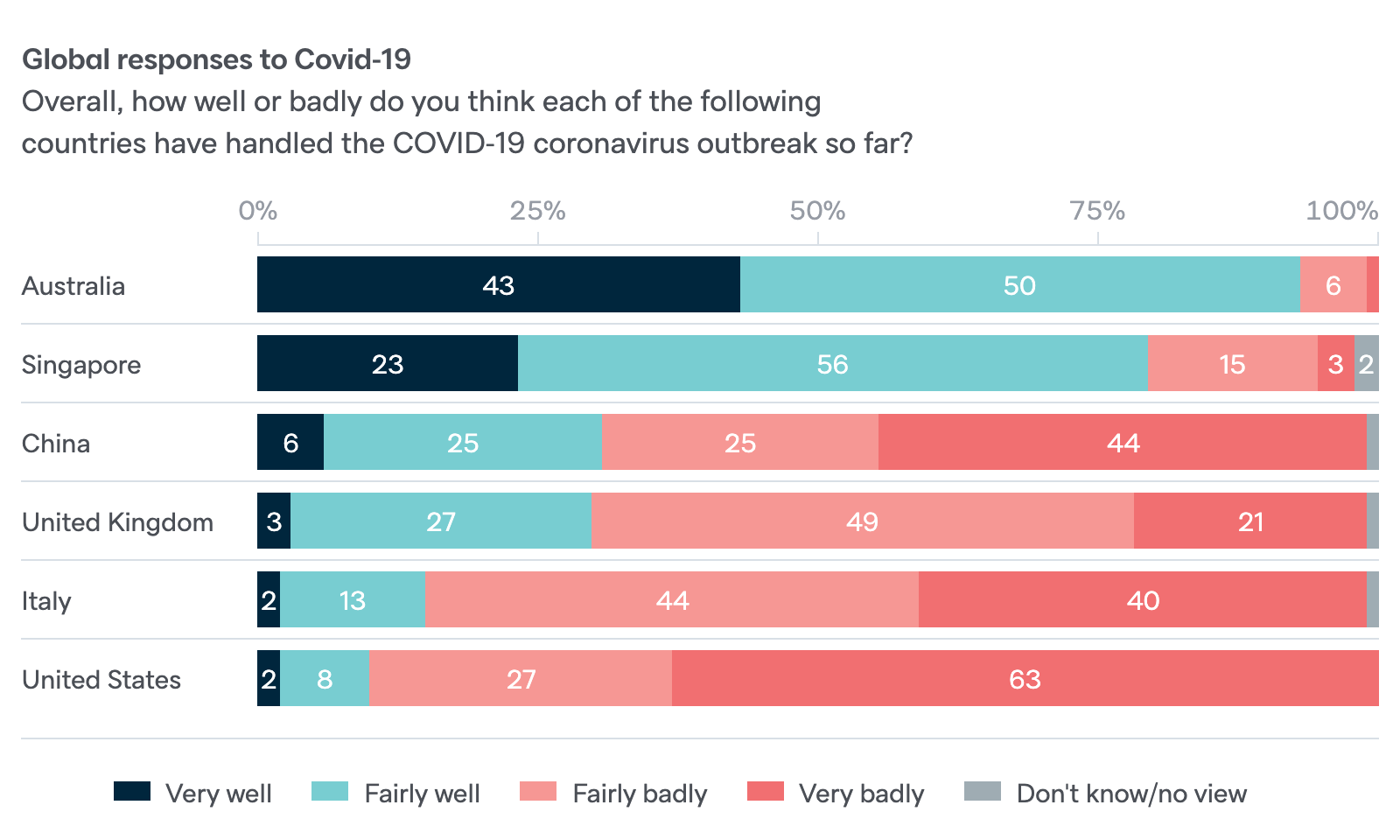 When considering the US presidential election in November, seven in ten Australians (73%) say they prefer Joe Biden as the next US President, equal to Australian support for Barack Obama’s candidacy in 2008.[2] Although the United States’ handling of the COVID-19 crisis is seen very negatively, support for Donald Trump’s presidency has increased from a low base, with 23% favouring his bid for re-election in 2020, a 12-point jump from Australians’ views prior to the 2016 US election.[3] 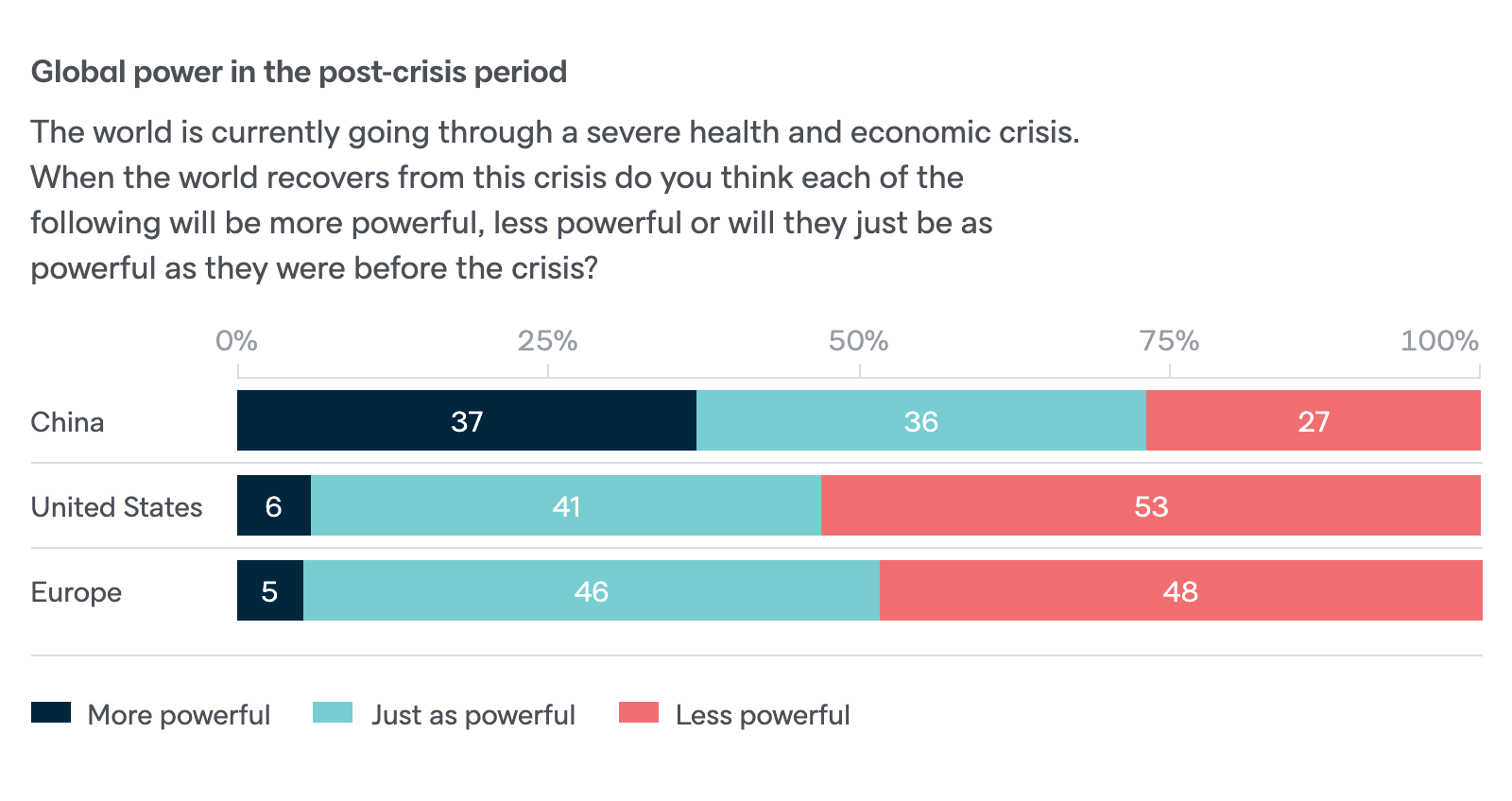 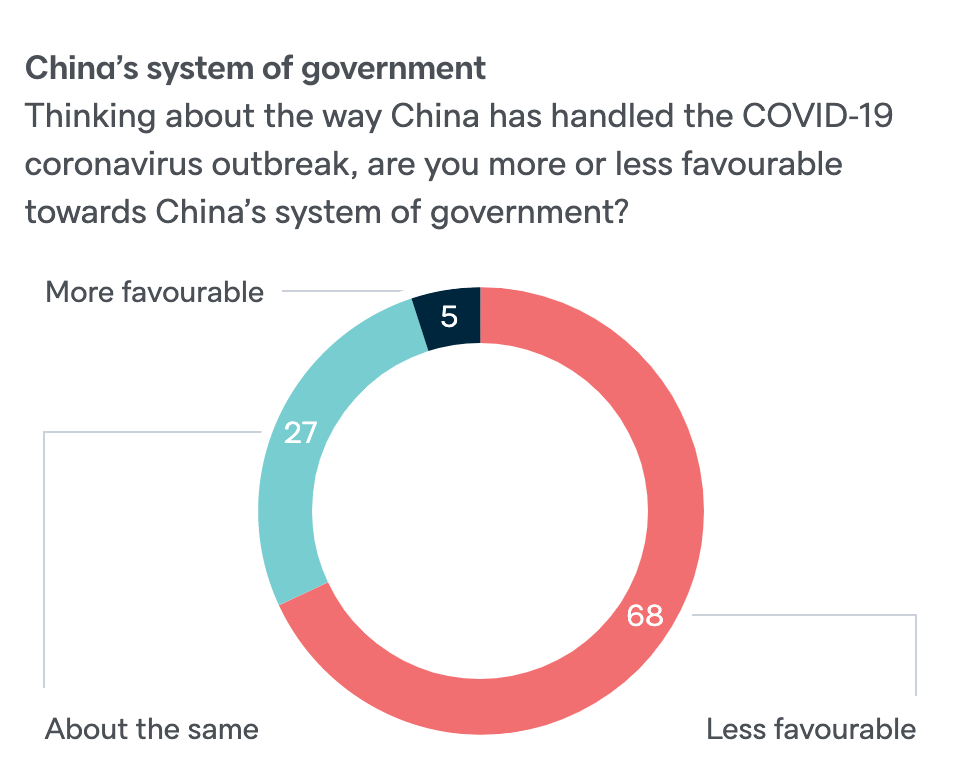 With parts of Europe hit hard by the virus, Australians are uncertain about its future. Around half (48%) say Europe’s power will be reduced after the COVID-19 crisis, almost the same number (46%) say it will be just as powerful as before the crisis, and 5% say Europe will be more powerful.

Australians have tended to avoid recent trends of protectionist and anti-globalisation sentiment, and despite the ongoing pandemic which has affected every part of the world, their embrace of globalisation endures. Seven in ten (70%) Australians say that globalisation is ‘mostly good for Australia’, more than the number expressing the same view in the Lowy Institute Poll 2006 and consistent with their responses in 2019.[5] There is a gap, but only slight, between urban and rural populations, with urban Australians slightly more supportive of globalisation (72% saying it is mostly good) than their regional counterparts (65% saying mostly good). 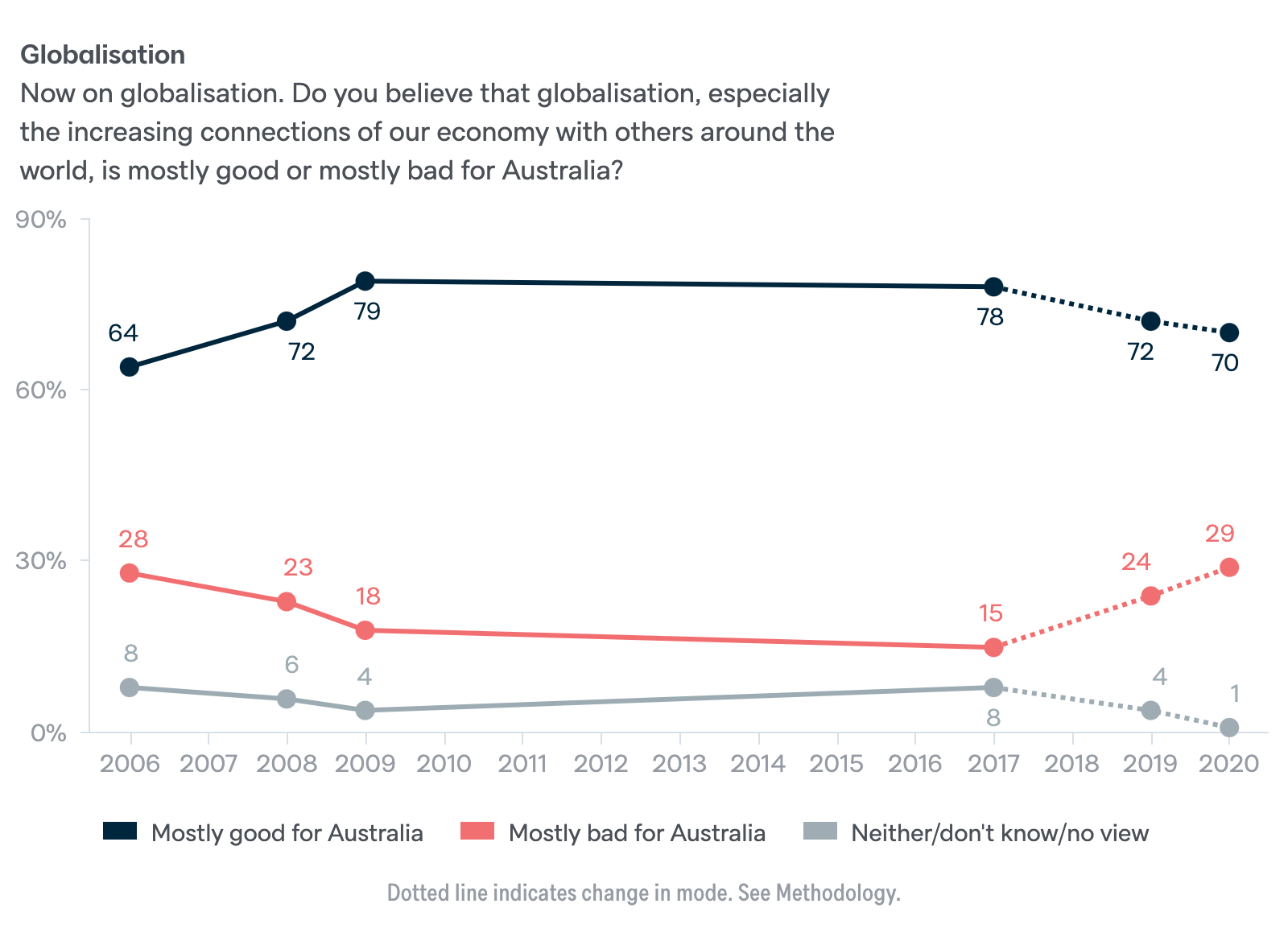 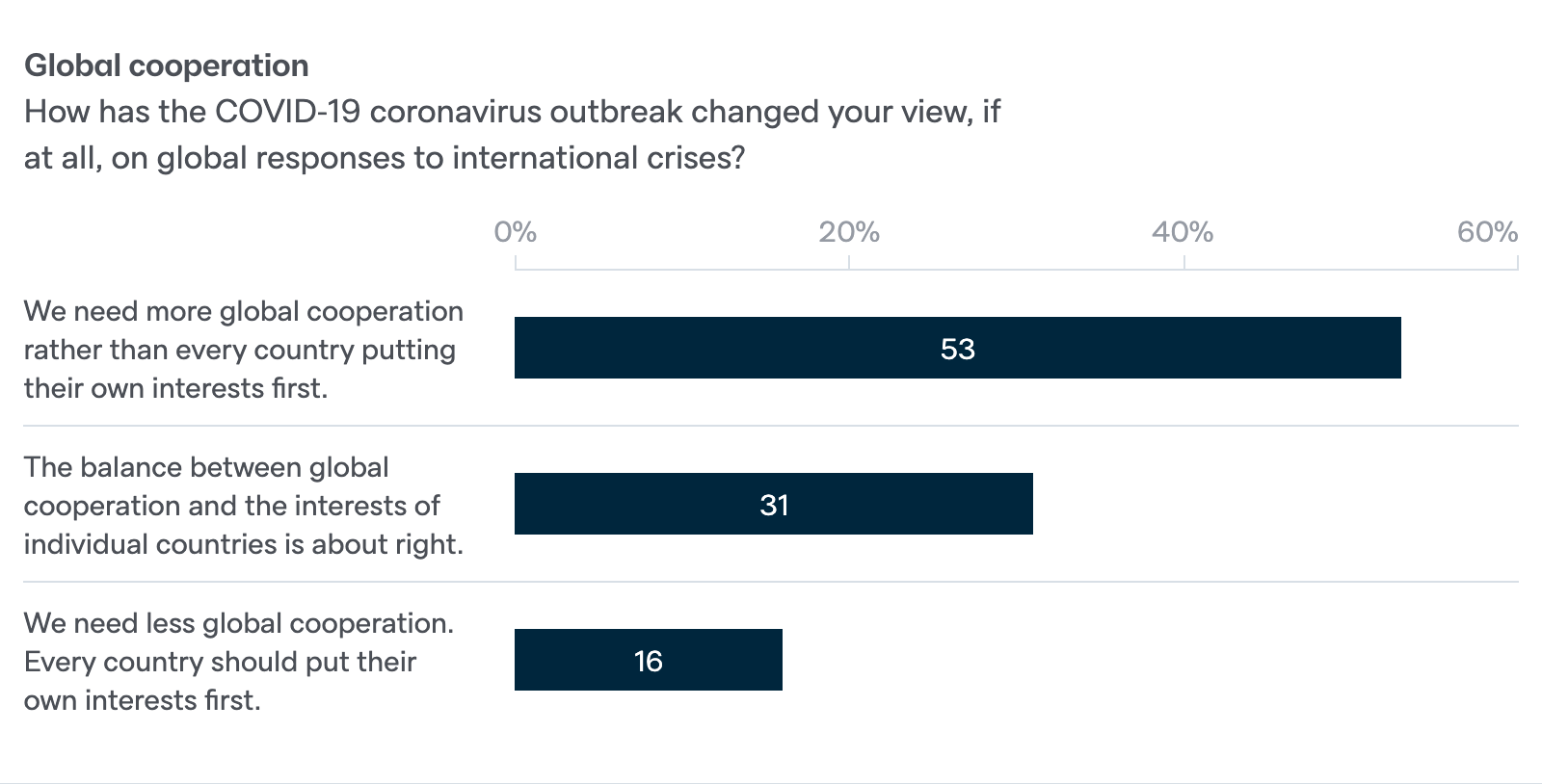 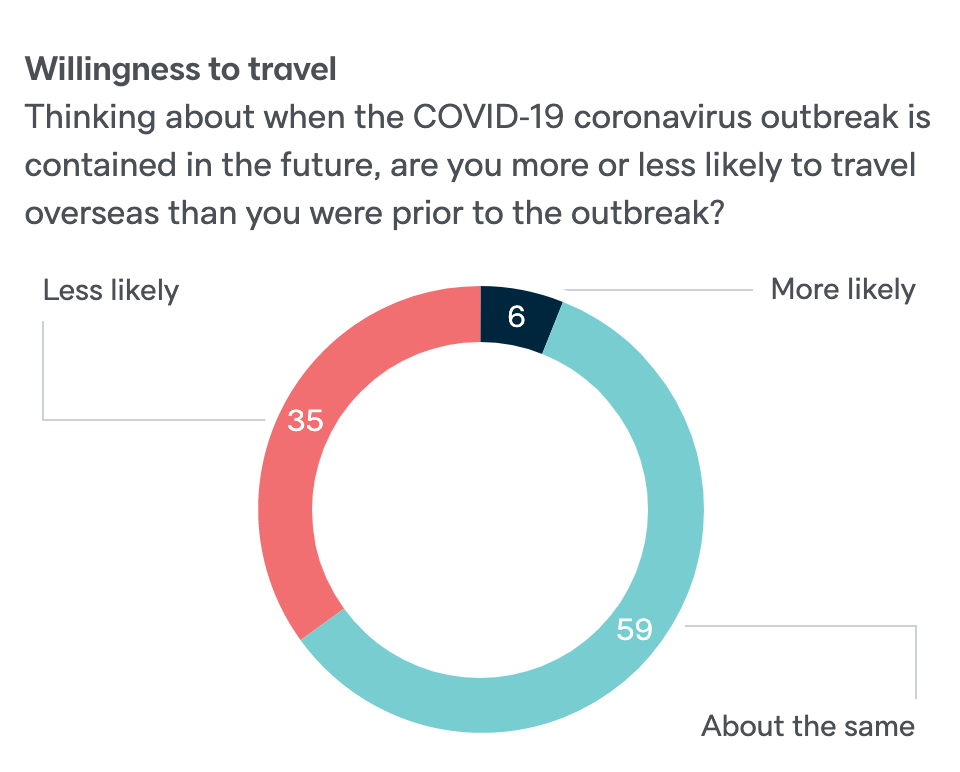 Australian perceptions of authority and sources of information 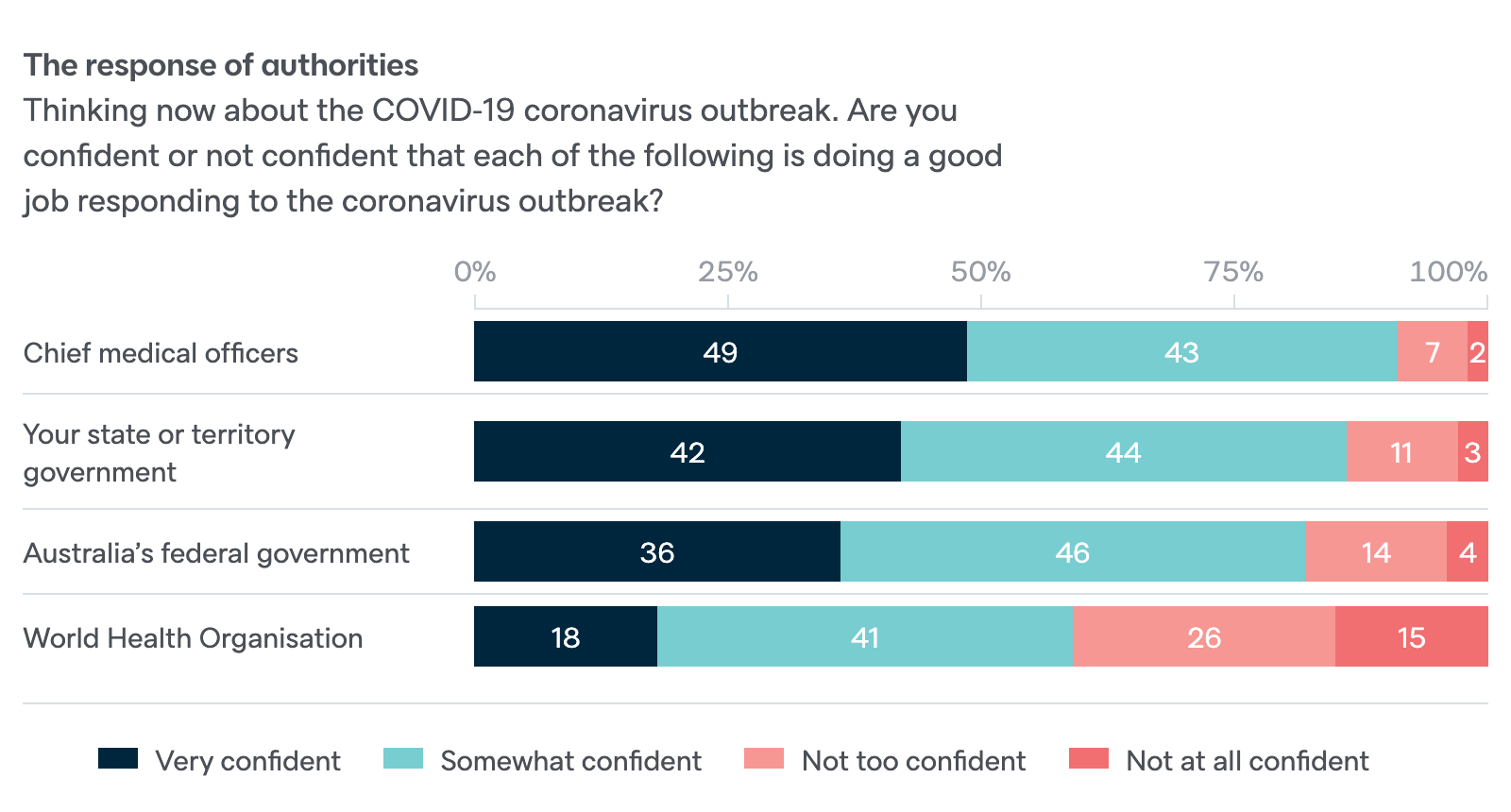 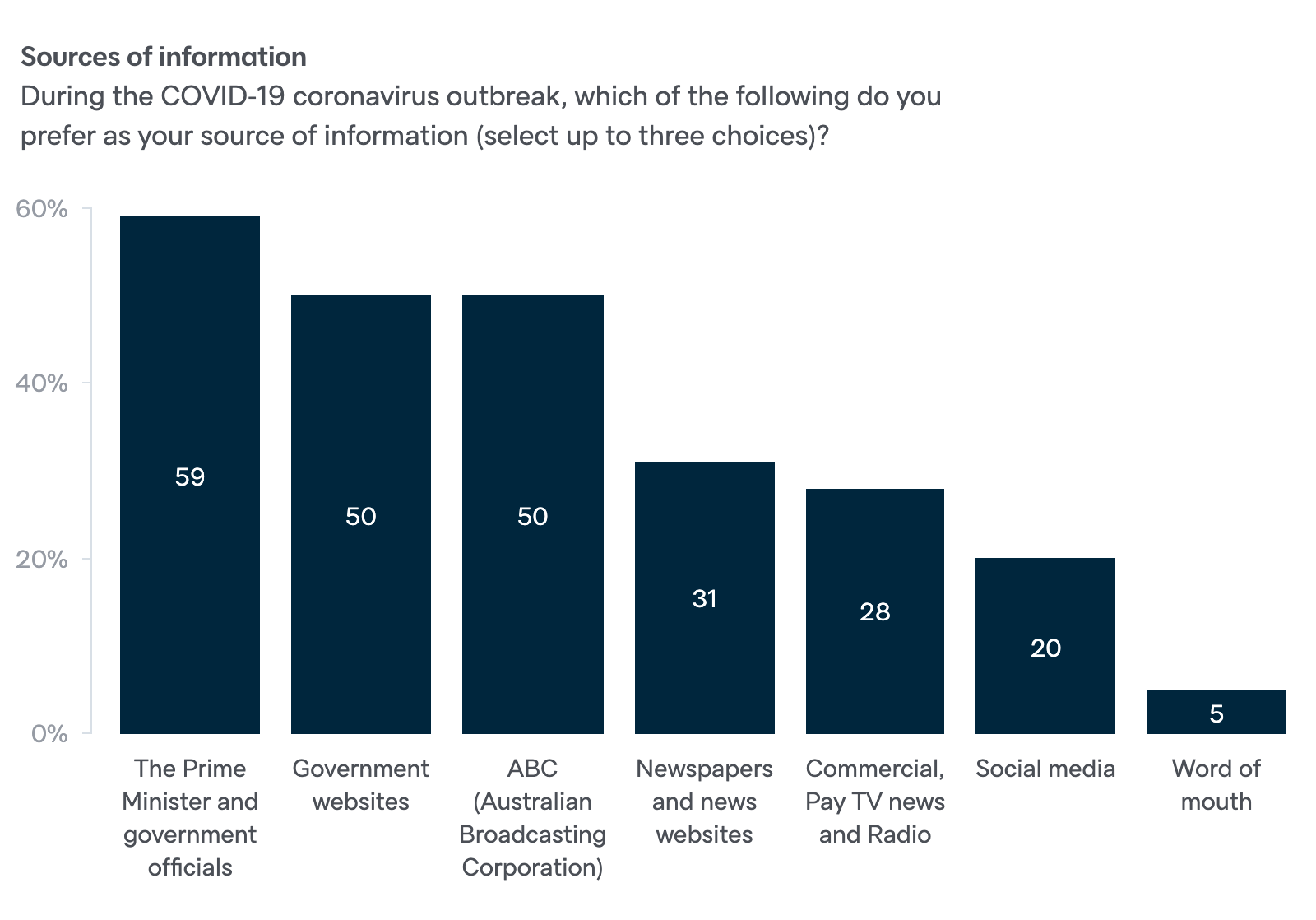 Overall, how well or badly do you think each of the following countries have handled the COVID-19 coronavirus outbreak so far?

2.  Power in the post-crisis period

The world is currently going through a severe health and economic crisis. When the world recovers from this crisis do you think each of the following will be more powerful, less powerful or will they just be as powerful as they were before the crisis?

Thinking about the way China has handled the COVID-19 coronavirus outbreak, are you more or less favourable towards China’s system of government?

The United States’ presidential election will be held in November this year. Which candidate would you prefer to see become President of the United States?

Now on globalisation. Do you believe that globalisation, especially the increasing connections of our economy with others around the world, is mostly good or mostly bad for Australia?

How has the COVID-19 coronavirus outbreak changed your view, if at all, on global responses to international crises?

Thinking about when the COVID-19 coronavirus outbreak is contained in the future, are you more or less likely to travel overseas than you were prior to the outbreak?

8. The response of authorities 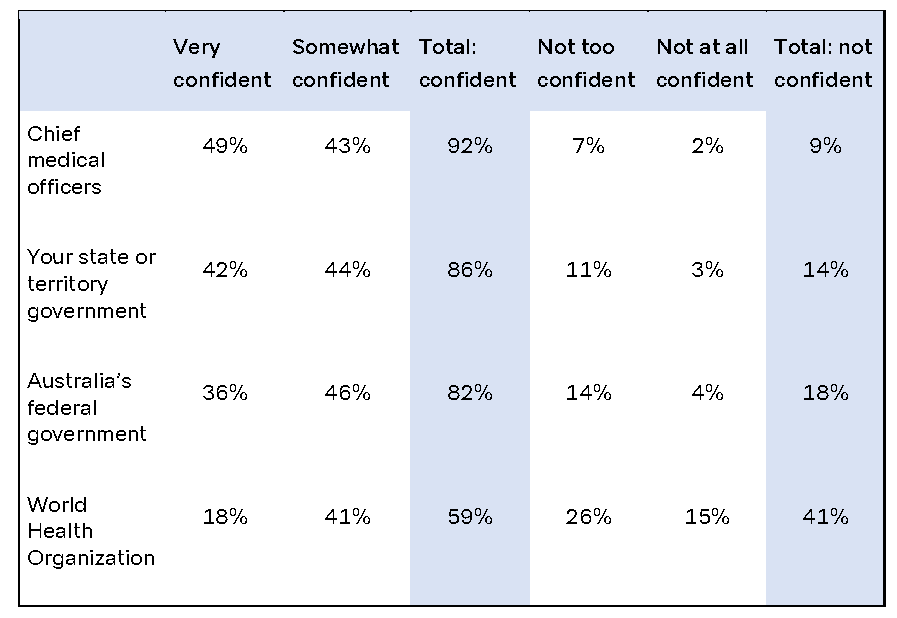 During the COVID-19 coronavirus outbreak, which of the following do you prefer as your source of information (select up to three choices)?

COVIDpoll by the Lowy Institute Poll reports the results of a nationally representative online and telephone survey conducted by the Social Research Centre between 14 and 27 April 2020 with a sample size of 3036 Australian adults. The order of the questions in this questionnaire was different from the order presented in this report.

The survey was conducted by the Social Research Centre (SRC), using the Life in Australia™ panel — currently the only probability-based online panel in Australia. Members of the panel were randomly recruited via their landline or mobile (rather than being self-selected volunteers) and agreed to provide their contact details to take part in surveys on a regular basis. SRC uses a mixed-mode approach for the panel, including online surveys (94% of respondents) and computer-assisted telephone interviewing (6% of respondents) to provide coverage of the offline population (households without internet access).

On a simple random sample of 3036 responses, the margin of error is approximately 1.8%. Where a complex sample is used, the ‘design effect’ measures the additional variance in comparison with a simple random sample. The design effect for this survey is estimated at 1.86. For the COVIDpoll survey, a completion rate of 76.9% was achieved. Unlike other commercial online panels in Australia, the probability basis of the Life in Australia sampling method means results are generalisable to the national population and sampling errors and confidence intervals can be calculated.

For more information on the Lowy Institute Poll and methodology, go to https://lowyinstitutepoll.lowyinstitute.org/.