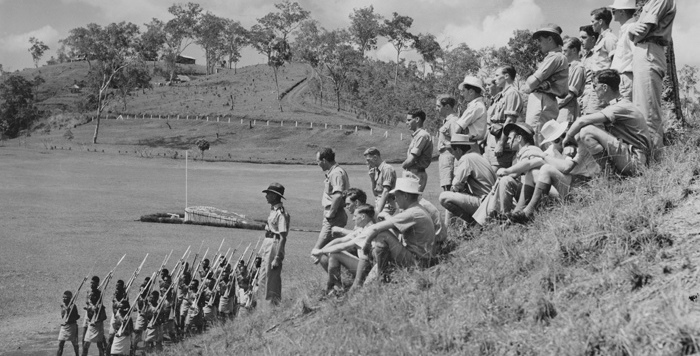 Forty years after independence, Papua New Guinea is the largest single recipient of aid from Australia. Yet Australians seem to be largely ambivalent about the country. Few Australians know the history of our colonial rule in PNG and our ties to the country are being forgotten.

Forty years after independence, Papua New Guinea is the largest single recipient of aid from Australia. Yet Australians seem to be largely ambivalent about the country. Few Australians know the history of our colonial rule in PNG and our ties to the country are being forgotten.

PNG expert Sean Dorney examines PNG's weaknesses and strengths since independence and argues that, for moral and practical reasons, Australia needs to reconnect with Papua New Guinea. It is time we shed our embarrassment about our colonial past and embrace our relationship with our nearest neighbour.

Australia never spent a great deal of money on Port Moresby when it was the headquarters of Australia’s colonial administration. Indeed, the contrast between what the British had built in Suva during its colonial governance of Fiji and what Australia constructed in Port Moresby for its administration of Papua New Guinea is revealing.

The stone and concrete Suva buildings are majestic examples of colonial architecture. In Konedobu, on the shores of the Port Moresby harbour, the Australian administration consisted of a collection of unimpressive wooden buildings, some quite ramshackle.

Australia, it seemed, was determined to pretend that it was not a colonial power.

“I wouldn’t say that any Australians thought we had a colony,” Dame Rachel Cleland, the widow of Sir Donald Cleland, administrator from 1952 to 1967, told the ABC’s Taim Bilong Masta social history radio series in the early 1980s.

“That was not in any way the thinking. The first time I heard ‘colony’ mentioned was about 1965, and it gave me a distinct shock.’

Of course, the truth is that Australians were colonials – but it is something that does not fit well with the view that the nation holds of itself. Australia is a nation that evolved from a convict settlement, names Ned Kelly as an iconic figure and its favourite national song is about somebody who stole sheep.

So it is probably no surprise that Australia does not celebrate that as a nation it ruled over another people.

The British readily acknowledge their imperial history and take pride in having had a British empire that is now the British commonwealth. Not Australians.

It is because of our seeming reluctance to fully address our history in PNG and look rigorously at the consequences that I have coined the term “embarrassed colonialist”.

Gough Whitlam travelled to Papua New Guinea as opposition leader in 1969 and made PNG an election issue in Australia – for perhaps the first and only time. He advocated that an early date be set for the end of Australian colonial rule. He proposed that self-government should be granted as early as 1972.

On two highly publicised follow-up trips in 1970 and 1971, Whitlam travelled to the Gazelle Peninsula in East New Britain where some of the Tolai people were agitating for greater control over their affairs. There was also trouble brewing for the Australian administration on Bougainville over land matters relating to the opening of CRA’s Bougainville copper mine. Whitlam won power in Australia in December 1972, and PNG became self-governing at the end of 1973 and independent in September 1975.

Australia could not have delayed giving PNG its independence for many more years without witnessing far more strife and consequently far greater post-independence problems. The debate is not “Did PNG get independence too early?” but “Did the preparations start too late?”

Michael Somare, Papua New Guinea’s first prime minister, is fairly blunt about it: “Australia did not put in enough effort to prepare us.”

“Even a lot of people who became district commissioners, some of them have admitted, ‘Yes, it was a mistake we made. We never prepared. The territory was never prepared for those changes.’ ”

There was a lot to be done. The Highlands did not really get opened up until the 1950s, and in 1970 there was still an area of some 170,000ha classified as not being under administrative control. There is no doubt that many of the Australian kiaps, school teachers, health workers, missionaries and others performed some extraordinarily heroic work in often very challenging circumstances.

Will Muskens, who was a kiap from 1958 to 1975, says it has always struck him as a missed opportunity that Australia did not enter into a treaty with PNG so that more of those who had spent valuable years there could have stayed on working alongside their Papua New Guinean counterparts. He believes that a treaty could have kept doctors, teachers, agricultural advisers, technical and trade specialists and kiaps in PNG for a few more years.

“Such an agreement could have been subject to terms that could be reviewed every 12 months, with salaries paid for by the Australian government,” Muskens says.

“I envisaged a scheme that would transfer all of these Australian officers to a special unit in the Department of Foreign Affairs seconded to PNG, but under the direction and control of the relevant PNG departments.”

But in our haste to leave after independence, we offered all these people golden handshakes.

“While I, and a large number of my colleagues, opted to leave under the terms of the employment security scheme,” Muskens says, “which literally encouraged us to take the money and run, I feel certain that if the Australian government had been seriously committed to retaining our services I would have stayed on.”

Few know much about a fascinating country

Inevitably, those thousands of Australians who did work in Papua New Guinea before independence are fast thinning out.

Fewer and fewer Australians have any real knowledge of this fascinating country to Australia’s north, which we were responsible for bringing to nationhood. This lack of understanding affects our dealings.

The Australian media generally ignores PNG. And too few of those advising on or deciding on policy seem to show any deep, abiding interest. As one senior figure in Canberra told me in the corridors of Parliament House: “The lowliest adviser and the backest of backbenchers can give you chapter and verse about the Middle East, but you could probably walk into a cabinet meeting and talk about PNG and everyone will stare at you and blink.”

There are exceptions. The opposition immigration spokesman, Richard Marles, who travelled there as a 16-year-old says: “We have on our doorstep the most exotic country in the world. Life is lived in Papua New Guinea in a way that it is lived nowhere else on the planet.”

“It is genuinely remarkable and I think we Australians are incredibly lucky to have PNG as a neighbour. But I don’t think that sort of amazement and that wonder about PNG is at all understood in Australia.”

But the level of ignorance is frustrating, he says.

“We used to be the world experts on Papua New Guinea and now the level of study and literature in Australia has gone down dramatically.”

We should turn that around.

This is an edited extract from Sean Dorney’s The Embarrassed Colonialist, a Lowy Institute Paper, published by Penguin Australia