In Afghanistan, peace or fragmentation?

A potential US-Taliban deal and a shaky presidential re-election stir both hope for the future and fears of the past. 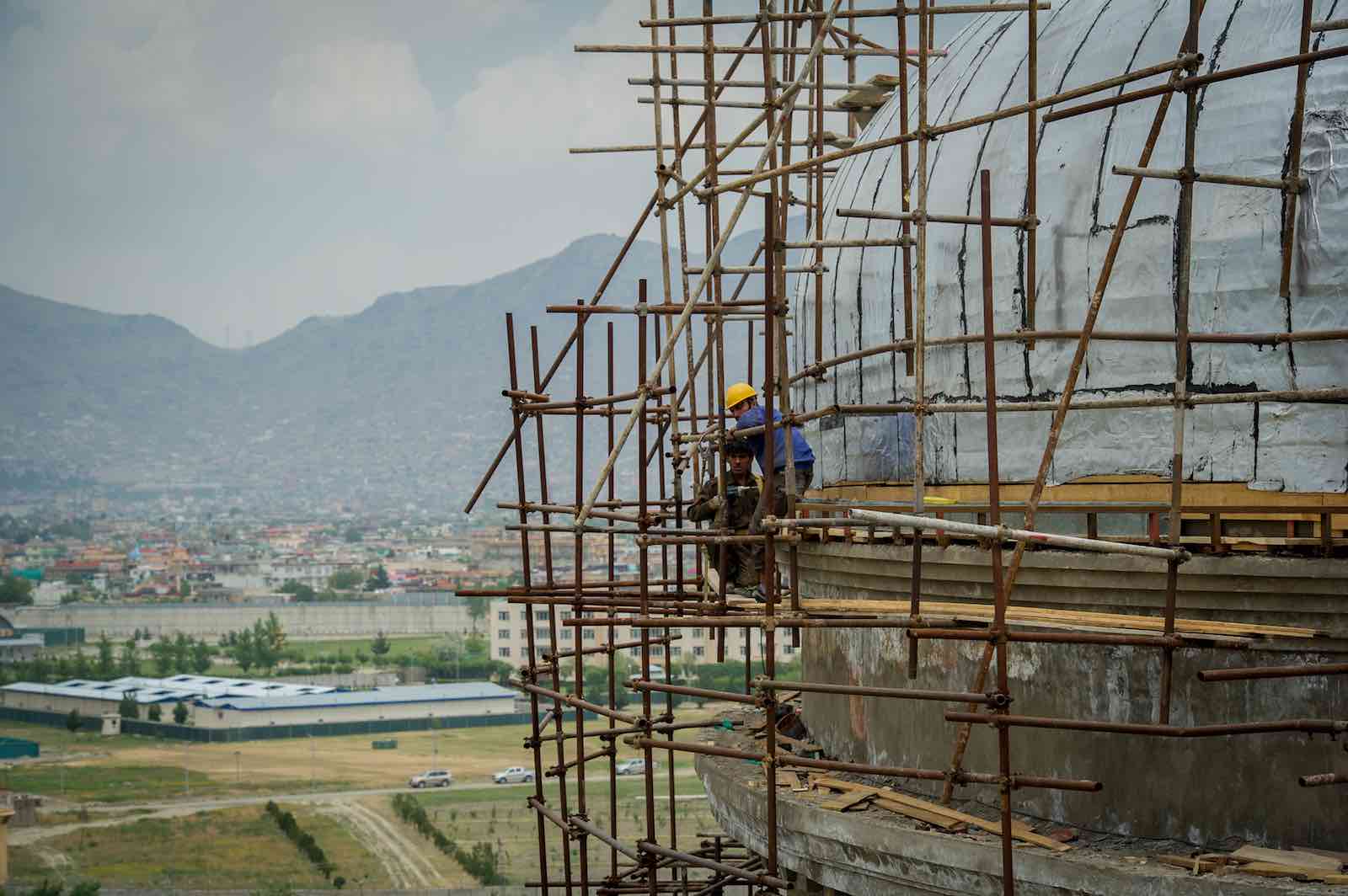 A sense of déjà vu prevails in Afghanistan – it’s 2014 again. Only this time, a possible lasting peace is at stake. Hot on the heels of a US-Taliban agreement to trial a seven-day “reduction in violence”, Afghanistan’s political order faces its worst political and constitutional crisis since John Kerry’s whirlwind shuttle diplomacy, which helped establish the National Unity Government – an ostensible power-sharing compromise – and stave off civil war.

Actually, it is February 2020 and Afghanistan’s Independent Election Commission (IEC) recently announced Ashraf Ghani (the incumbent) as the winner of the September 2019 presidential elections, awarding him another five-year term. The result has been vociferously disputed by the Chief Executive Officer (a Prime Minister–like post) and election challenger, Abdullah Abdullah, who has threatened to form a “parallel government”, in violation of the constitution. Just as in 2014, he has supporters who have backed his call – most notably Abdul Rashid Dostum, a former militia commander and Ghani’s current First Vice President). Unlike in 2014, however, a petulant US President has made clear his intention to extricate the US from involvement in Afghanistan, while swinging wildly in his views on the US-Taliban peace process since 2017, stopping and starting talks. It remains to be seen whether his administration will move to appoint a diplomat to mediate between Ghani and Abdullah. But time is fast running out. The threat of a civil war, although unlikely, looms large over hopes of stability and peace. Abdullah has reportedly replaced provincial governors in the north of the country and appointed his own, railed against the EU for recognising the election results, and barred election officials from leaving the country.

The details of the reduction in violence remain sketchy and devoid of transparency, with no input from the Afghan government, adding to the widely held suspicion among Afghans and observers that the US has hastily agreed to an agreement, interested only in their exit strategy.

The Afghanistan Analysts Network’s Thomas Ruttig points out that a parallel government based in the north of the country may not be a far-fetched reality – in the late 90s, at the height of Taliban power, Dostum carved out a semi-autonomous fiefdom with its own currency. One potential implication of Abdullah taking his ball and going home, figuratively speaking, is that Afghanistan could split along ethnic lines (ethnic identity is relevant to both Ghani’s and Abdullah’s electoral constituencies). Violence manifest overtly between political factions would only benefit the Taliban and their insurgency movement: a fragmented opposition will be easier to defeat.

This confluence of an election crisis and a precarious peace process makes navigating either more challenging. Here are some of the key issues.

The 2019 election witnessed a record-low voter turnout. Ghani was re-elected with support from fewer than 10% of eligible voters, or just over 900,000 votes. As noted previously on this forum, “whatever the election result, [this] will be used to question the legitimacy of whichever candidate attempts to form the next administration”. Added to this, allegations of election fraud have for months threatened to plunge the country into political crisis. The IEC’s February announcement – following an opaque and sloppy vote-count process – was not transparent enough to quash doubts of Ghani’s victory. In fact, Abdullah and his allies have labelled the result a “coup”, implying that the election was stolen.

In a slightly different context, analyst Dipali Mukhopadhyay warned that Afghan power brokers must not be tempted “to go it alone and engage in predatory, even cannibalistic behaviour”. The sense of investment in the state’s survival that animated elites’ actions seems to have been unravelled by a creeping fear that the election results will deny them a piece of the pie. But why?

One answer is that Afghanistan’s winner-take-all presidential system concentrates power in the hands of a few, and the latest iteration of the democratic process motivates elites to act on interests based on short time horizons and low expectations for peace. As Jennifer Murtazashvili and Mohammad Qadam Shah point out, the current political system drives both the insurgency and intra-elite factionalism. The president not only controls the budget, but appoints all ministers, provincial and district governors, and mayors too. Presumably, the sitting government in Kabul will play a lead role in intra-Afghan talks involving the Taliban, thereby determining the nation’s political order. Little wonder, then, that some elites feel powerless, their sense of feebleness exacerbated by the uncertainties of an impending US-Taliban peace deal.

On 14 February 2020, the US announced a two-stage peace deal with the Taliban. In the first stage, the two protagonists will substantially “reduce violence” against each for seven days. If satisfied, the protagonists will sign a broader deal covering issues such as the withdrawal of foreign troops, thus fulfilling the Taliban’s major demand (indeed, their very raison d’être as a resistance).

One news agency reported that the Taliban has committed to reducing its attacks from 75 per day to under 15. How will this be monitored? What is the mechanism for determining what is a skirmish (or not), and which ones to consider a violation? The details remain sketchy.

What is the US motivation for a reduction in violence? Beyond a showing of good faith, the most likely explanation is that the US wants demonstrable assurance that the Taliban leaders have full control over their commanders and rank-and-file fighters spread across the nation. It is unlikely that the US would agree to Taliban demands if they suspect that individuals or groups will violate any peace deal in future. And so, on the eve of the first stage of the peace deal, the Taliban political office issued a decree that explicitly ordered Taliban commanders and fighters to cease attacks against the Afghan government’s provincial headquarters and foreigners based in the capital, Kabul.

Several observers have rightfully questioned the logistics and timing of this first phase of the agreement. Why now? The fighting season in Afghanistan starts in April, with the Taliban’s annual Spring offensive. A better indicator of Taliban sincerity would be to implement the first phase when it would otherwise be opportune for the Taliban to continue to escalate violence and exhaust the beleaguered Afghan security forces. Further, how much violence is to be “reduced”? 20%? 50%? One news agency reported that according to an anonymous Afghan official, the Taliban has committed to reducing its attacks from 75 per day to under 15. How will this be monitored? What is the mechanism for determining what is a skirmish (or not), and which ones to consider a violation? The details remain sketchy and devoid of transparency, with no input from the Afghan government, adding to the widely held suspicion among Afghans and observers that the US has hastily agreed to an agreement, interested only in their exit strategy – a “rotten compromise”. Curiously, who will monitor reduction in violence on the US side? Afghanistan expert Barnett Rubin has stated that the US and Taliban have agreed to a mechanism by which to share information and monitor violations. It remains to be seen whether a group that is responsible for the majority of civilian casualties can be entrusted to monitor a reduction in violence.

The US-Taliban reduction in violence agreement (and eventual peace deal) is only the beginning of a long and complex process. There are several other issues to consider. As Afghanistan expert Jason Layall points out, the hard work will begin during the intra-Afghan talks, when the following issues will need to be sorted: what role does the Taliban have in government? Will the Taliban demobilise, and their foot-soldiers and commanders be integrated into the Afghan army? Who will be responsible for collecting tax, and will the international community continue to provide financial assistance to the new government?

These are extremely challenging political and legal issues, and the election crisis threatens to risk derailing the effective implementation of elements of the US-Taliban peace deal (although not necessarily a US withdrawal) and sink the possibility of intra-Afghan talks. This explains why the US wants Ghani to postpone his planned inauguration, so as not to jeopardise the peace process.

Despite the challenges, there is a glimmer of hope. In 2018, when President Ghani called a unilateral ceasefire, the Taliban reciprocated by showing restraint and ceasing fighting for three days. Many were sceptical of the outcome and some were critical of the process which allowed Taliban fighters to move into government-controlled areas. Others opined that not enough thought had gone into what a ceasefire could produce under circumstances where the Taliban insurgency was making progress. Despite these misgivings, citizens around the country embraced the respite and rejoiced at the potential of a more lasting peace. Taliban fighters interviewed claimed to be tired of fighting their brethren and expressed a desire to return home to peaceful lives.

Jump to February 2020, and the hope is palpable. The possibilities are endless, even if fragile. As New York Times Senior Afghanistan correspondent Mujib Mashal wrote so eloquently on Twitter,

“The road to peace is no easy road. But there’s a beginning of a road now…. Who knows, we may remember this stroke of midnight.”

One hopes that it does not end up being remembered for all the wrong reasons.

Show Comments
Previous Article
Car manufacturing and Australia: Nothing ventured, nothing gained
Next Article
Is media literacy the magic bullet for fake news?