There was no “low cost” solution for the United States other than endless conflict. 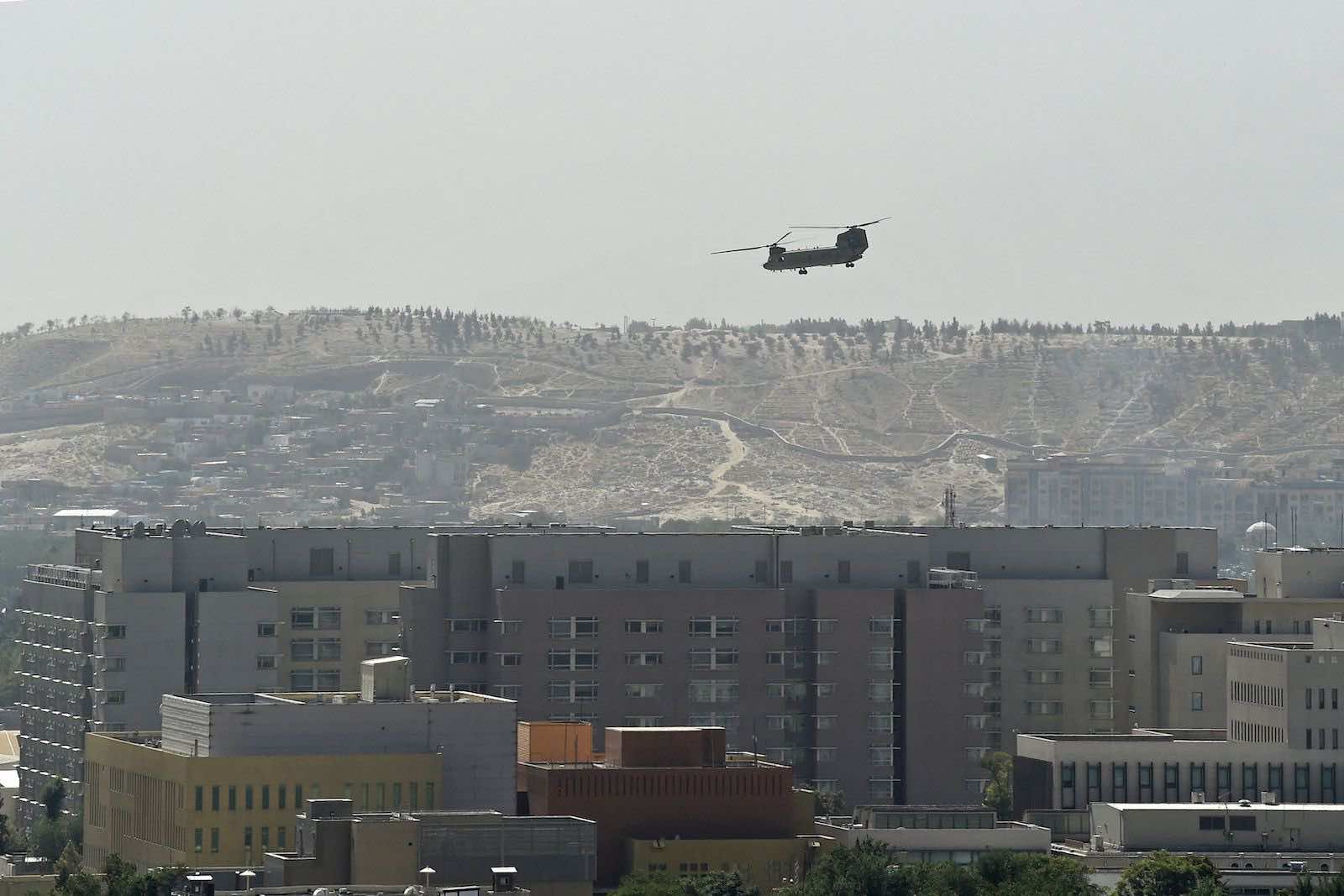 A US military helicopter is pictured flying above the US embassy in Kabul on 15 August (Wakil Kohsar/AFP via Getty Images)
Published 16 Aug 2021 11:00   2 Comments       Follow @RodgerShanahan

Joe Biden is right to get the United States out of Afghanistan. Even as Kabul has been taken over by the Taliban, the case remains strong that after 20 years, the United States has fought its war in the country.

It is sometimes easy to forget that the president is also commander-in-chief of the US military. Biden appears to be someone who wants to be certain that the strategic aim he sets for the military on operations is both achievable and worth the lives of those service men and women who may die because of the orders he gives. In Afghanistan he felt that the mission no longer justified that risk.

The speed with which the Afghan military and political class appear to have been overwhelmed by the Taliban surprised not only the White House but nearly all other coalition partners. But perhaps counter-intuitively it will also likely have confirmed to Biden that his decision was the correct one. If all there is to show after spending two decades building up the Afghan military is an institution that is unable or unwilling to defend its population against an enemy that it outnumbers and outguns, then it’s not going to get any better with another two decades’ worth of effort.

The statement Biden issued on Saturday could not have been clearer about his belief that Washington had given enough:

Over our country’s 20 years at war in Afghanistan, America has sent its finest young men and women, invested nearly $1 trillion dollars, trained over 300,000 Afghan soldiers and police, equipped them with state-of-the-art military equipment, and maintained their air force as part of the longest war in US history. One more year, or five more years, of US military presence would not have made a difference if the Afghan military cannot or will not hold its own country. And an endless American presence in the middle of another country’s civil conflict was not acceptable to me.

There have been some calls for the United States to remain, in one case citing the Korean peninsula as a model for a long-term US presence, while others spoke of the “low, sustainable cost” as justification for a continued coalition presence. The Korea comparison is too strange to even critique, while the “low cost” argument neglects to mention the fact that the lack of US casualties was partially to do with the months of negotiations with the Taliban, during which they avoided targeting US troops. Were Washington to renege on the deal, the cost in US lives would start to increase again.

Moreover, the argument that a continued US presence in Afghanistan entailed a low cost ignores the price paid by Afghans themselves. Between 2014­–19, Afghan security forces suffered 45,000 deaths, nearly 3,500 in 2020, and hundreds more each month in 2021. The exact totals are difficult to tell because no official figures are released.

There was no realistic way in which Washington could throw more resources into the fray.

With these type of casualty rates, it is easy to see why morale was low among Afghan security forces. And without a government that they felt worth fighting for, or a military leadership that was capable of planning and conducting a coherent defence or a fighting withdrawal, then the Biden administration would have realised it had two choices – to double-down or fold.

There was no realistic way in which Washington could throw more resources into the fray. There are parts of the Afghan military that fought well and to the end. But there were not enough of them to “turn the tide” without enormous and extended coalition support to back them.

The idea that the war in Afghanistan could continue to be “low cost” (not that it ever was) amounts to a fantasy. Had Biden declared America was staying, the Taliban would have redoubled efforts to target coalition troops. And the idea that the Afghan security forces could continue to sustain hundreds of deaths every month without eventually needing much greater external support is a misnomer.

Whether the mission was “worth it” will be left to historians to decide. There have been marked improvements in many social indicators across the past two decades. The sustainability of such progress is now seriously in doubt. Recognition of the Taliban government by the West could be contingent on their adherence to international human rights covenants. A small carrot for sure, but sovereignty is something that the Taliban will seek because of the legitimacy and international legal cover it provides them.

There is also the continuing terrorist threat posed by al-Qaeda and Islamic State elements within the country, although the attitude of any future Taliban regime towards them is uncertain. These groups also pose risks in other countries and other ways of dealing with the threat than occupying a country. If eventual Taliban rule over Afghanistan is not formally recognised, it will allow the United States some flexibility in undertaking operations against terrorist targets there.

Ultimately, however, the US commander-in-chief believed the risk to his soldiers’ lives posed by a continued presence in Afghanistan was no longer in the national interest. It was undoubtedly a difficult decision to make, but a hard one to argue against.

Show 2 Comments
Previous Article
Germany’s federal election: choose any colour you like
Next Article
Kabul has fallen and so have we