Across the continent, measures to keep Covid-19 at bay have been accompanied by strict and sometimes brutal tactics. 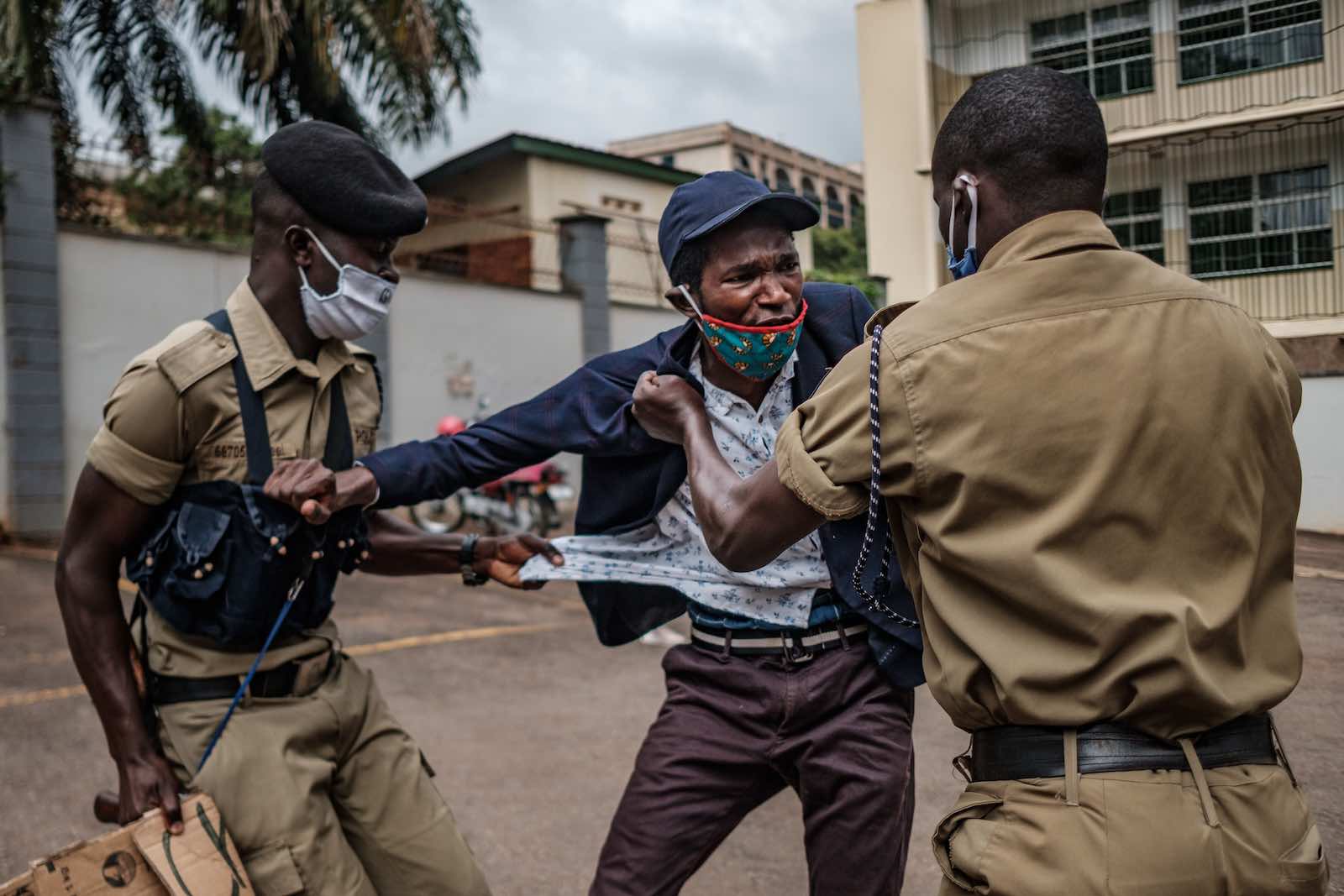 A demonstrator is arrested by police at a protest for more government food distributions during the Covid-19 crisis, 18 May in Kampala, Uganda (Sumy Sadurni/AFP via Getty Images)
Published 29 May 2020 12:00   0 Comments

In the health and epidemiological challenges posed by the coronavirus pandemic, countries have had little choice but to introduce strict measures to contain its spread, banning travel, imposing lockdowns, releasing prisoners en masse and bringing other actions unthinkable under ordinary circumstances.

In many respects, the response in most African nations has been no different. But as the pandemic threatens to devastate already weak health care systems on the continent, the urgent need to control the spread of Covid-19 is even more pronounced than elsewhere.

The shortage of medical expertise, equipment and facilities, however, stands in stark contrast to the powers of law enforcement and security that have been exercised under the pretext of combatting the pandemic. As the last couple of months have demonstrated, this has laid the groundwork for a rise in police brutality, overreach, harassment, intimidation, corruption and violence.

To give an idea of how under-resourced some countries are, the Central African Republic has only three ventilators in a country of just under 5 million people. Somalia has none. South Sudan has 24 ICU beds for a population of 12 million, while it is estimated that 95% of people in Lesotho do not have household access to soap and water.

The UN High Commissioner for Human Rights noted that “people are dying because of the inappropriate application of measures that have been supposedly put in place to save them”.

So far, the number of cases has remained low. On 22 May, the World Health Organisation Regional Office in Africa said Covid-19 cases “have not grown at the same exponential rate as in other regions … Africa has not experienced the high mortality seen in some parts of the world”. Despite this relatively good news, global institutions and national governments have nevertheless cautioned against complacency.

But across Africa, measures adopted to combat the spread of the virus, principally lockdowns and curfews, have been accompanied by an expanded role for the police – and in some cases, security forces, leading to more deaths than the virus itself.

In April, South African President Cyril Ramaphosa called up over 75,000 members of the National Defence Force (SANDF) to assist the police with enforcing lockdown measures. Ramaphosa’s declaration of a state of disaster increased the powers of law enforcement to question civilians, administer fines and arrest persons allegedly contravening lockdown measures.

Other countries, such as Ethiopia and Botswana, have invoked a state of emergency, giving them the constitutional authority to suspend political, civil, economic and social rights.

Elsewhere, there have been myriad incidents reported of police and security forces using disproportionate – sometimes lethal – force against unarmed civilians. Victims across the continent have reported beatings, being shot with rubber bullets and tear gas, whippings, and rape. The UN High Commissioner for Human Rights noted on 27 April that “violations have often been committed against people belonging to the poorest and most vulnerable segments of the population … people are dying because of the inappropriate application of measures that have been supposedly put in place to save them”.

In March in Kenya’s capital of Nairobi, a 13-year old boy was killed by a stray bullet while standing on his balcony during curfew. The nation’s Independent Policing Oversight Authority suggested the officer responsible should be charged with murder, and the Inspector General of Police, Hillary Mutyambai, vowed the police would investigate the circumstances of his death.

Kenyan President Uhuru Kenyatta said in an April address, “I want to apologise to all Kenyans for ... some excesses that were conducted.” It remains to be seen, however, whether victims of police brutality will receive justice.

On 29 March, in the South African township of Vosloorus, 40-year-old Sibusiso Amos was shot and killed on his veranda by a police officer and a private security guard. On 10 April, Collins Khosa was beaten to death by members of the SANDF, who entered his premises after discovering a cup of alcohol in his front yard. The sale of alcohol during the lockdown is prohibited by the country’s Disaster Management Regulations.

In these cases, the South African government responded swiftly, arresting or suspending those responsible and launching investigations. The High Court ruled that all persons are entitled to fundamental human rights in times of disaster and declared that government bodies such as the SANDF must ensure that law enforcement conducts its duties properly.

There is, obviously, no singular explanation or panacea for law enforcement abuses in Africa. It is a product of country-specific and continent-wide crises interlocking – and independent causes which conspire to create an inhospitable policing climate. There is the innate difficulty in enforcing lockdown measures in urban settings where people lack basic living necessities; the dearth of human rights training for police forces; the not-so-distant memory of the Ebola outbreak; the panic of mass infection; the breakdown of trust between authorities and citizens; and simmering potential for civil unrest. All of these factors contribute to an atmosphere of uncertainty.

As lockdown restrictions eventually ease, this might correspond to a decrease in police brutality and overreach. But it is safe to say that this issue will not vanish from the continent overnight.