Alliance management – a history in pictures

In a game of diplomatic spot-the-difference, a sense of continuity is evident at recent AUSMIN meetings. 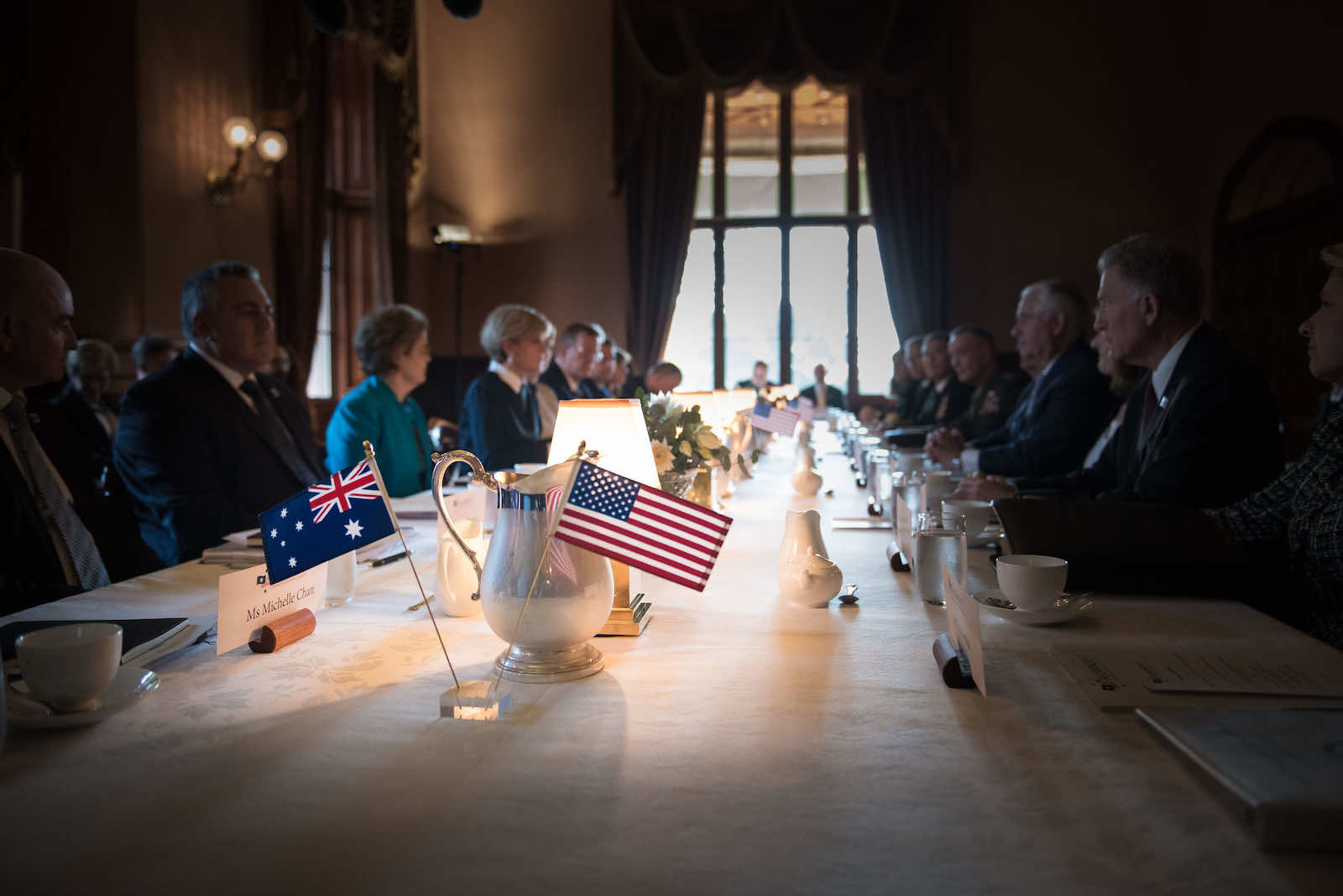 Call it a measure of remarkable diplomatic consistency. Every year since 2013, at least one of two familiar faces has represented Australia at the regular “2+2” ministerial dialogue with the United States, more commonly known as AUSMIN.

Either Julie Bishop or Marise Payne has been in the room.

But the American line-up sitting opposite has been far less settled – by the time of the next meeting, nine individuals will have filled the roles of Secretary of State or Defense, all men.

I asked Bishop this week about her experience at these mostly annual tête-à-têtes, whether the parade of characters on the other side added to the challenge.

AUSMIN has become the principal forum for managing the ANZUS Treaty, which today marks 70 years. For all the talk about shared values or the great strategic contours of global politics that drive Australia and the United States together, a good relationship still relies on personal ties.

Surely that gets tricky when key players chop and change?

For instance, from John Kerry who was her opposite number three times until 2015 …

… to Rex Tillerson after Donald Trump moved into the White House.

Only for Tillerson to memorably fall out with the President he called a “moron”, meaning at the next AUSMIN it was Mike Pompeo.

“There is enormous depth and experience within the United States political and diplomatic community, which supports smooth transitions between senior officials,” Bishop told me.

“I enjoyed very warm and constructive relationships with all my US counterparts and interlocutors.”

“Each brought personal and professional strengths, and were deeply knowledgeable about the full range of issues for discussion.”

“I enjoyed very warm and constructive relationships with all my US counterparts and interlocutors.” – Julie Bishop, Australia’s Foreign Minister 2013–18

Bishop attended five AUSMIN meetings in total as Foreign Minister until she resigned in 2018, the same number as Payne since, who took part in her first three as Defence Minister.

And it’s on the defence side where most change has been. From Australia, David Johnson attended as Defence Minister in 2013 and 2014, until shortly after his unfortunate remark about a canoe. His opposite number from the Pentagon was first Chuck Hagel.

After Payne joined the talks in 2015 in the defence portfolio, she first sat across from Ashton Carter. After the change of administration, it was former general James Mattis at the table, who later also fell out with Trump. His eventual replacement, Mark Esper, landed in Sydney for an AUSMIN barely 10 days after formally taking the job. Linda Reynolds took over Defence after a cabinet reshuffle sent Payne to Foreign Affairs.

Of course, AUSMIN is the icing. The cake, as Bishop alluded to, is the constant contact and cooperation by officials from both countries working on the alliance relationship. Ministers pick up the phone at other times of the year, too, and in the days before Covid would cross paths at various multilateral gatherings. Bishop often spoke of her text message diplomacy, which went far beyond America.

The next AUSMIN will feature three new faces – for Australia, Peter Dutton in Defence, and for the United States, Antony Blinken and Lloyd Austin. Two changes of administration in the United States since 2013 have added to the changes, whereas Australia switched Prime Ministers, leaving the Coalition in power.

For Payne, it will be meeting number six, a tally only bested by Australia’s longest serving foreign minister Alexander Downer, who attended nine.

Show 1 Comments
Previous Article
Will ANZUS make it to 80?
Next Article
Europe and the South China Sea