State and local officials have acted effectively to address the crisis, but they’re on their own, with no end in sight. 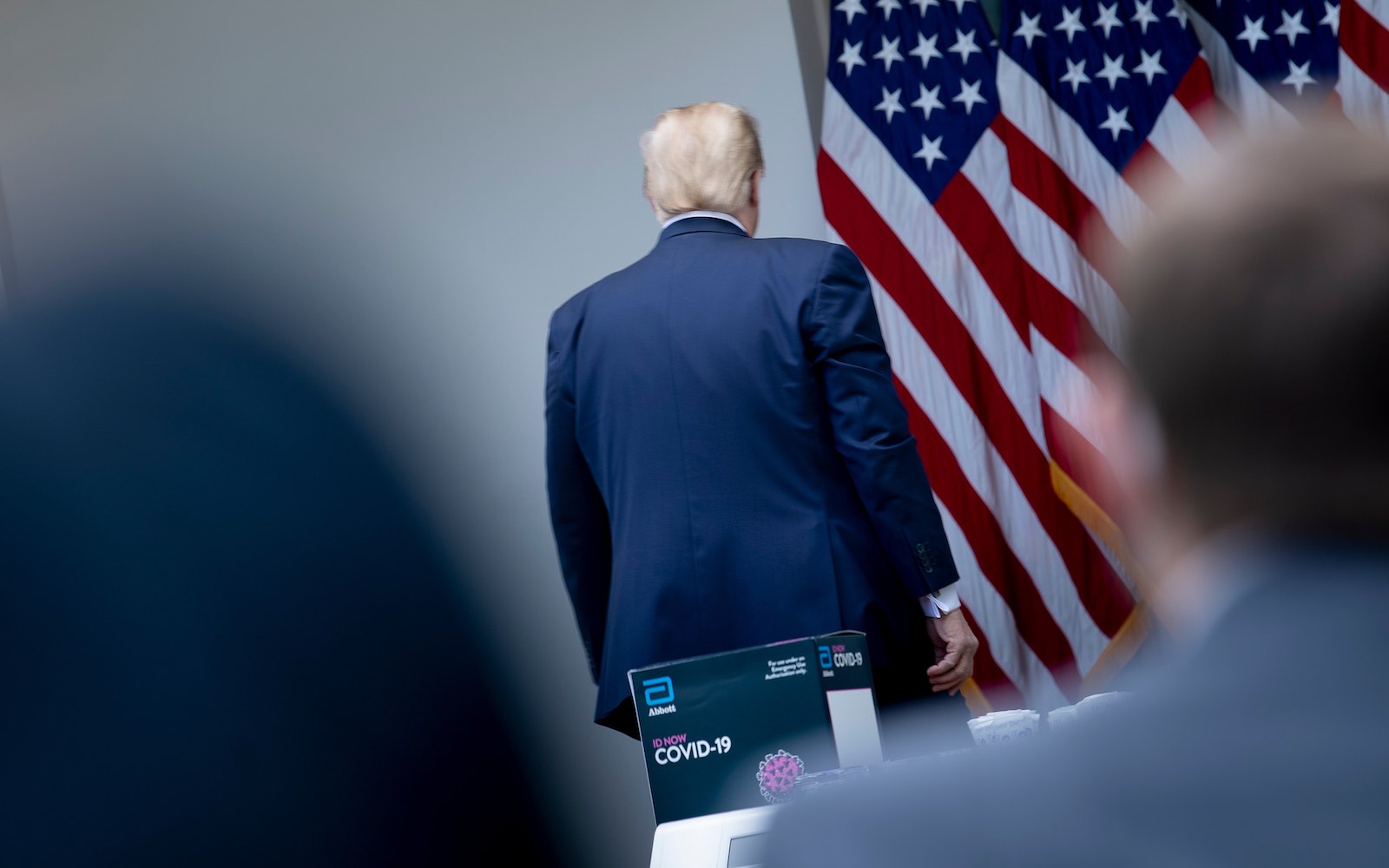 US President Donald Trump walks out of a news conference on Covid-19 held in the Rose Garden of the White House, Washington, 11 May (Brendan Smialowski/AFP via Getty Images)
Published 13 May 2020 13:00   1 Comments       Follow @erinehurley

Projecting optimism about US recovery from the coronavirus pandemic requires one to take the long view.

America’s response to the coronavirus pandemic, relative to the rest of the world, has been abysmal. The US has more than 30% of all cases, despite being home to only 5% of the world’s population. Upwards of 83,000 Americans have died over the past four months, a death rate six times higher than the global average.

The federal government was slow to act and then unwilling to shoulder significant responsibility. This dynamic, coupled with America’s long-time underinvestment in public health, raises serious questions about America’s capacity to contain the virus.

The “curve” in the US has – at least temporarily – flattened, but it has stabilised at an unacceptable rate, with 2000 Americans dying per day, week after week. In New York City, the epicentre of the epidemic, cases have recently begun to decline, but infections are on the rise throughout the rest of the country.

The US has not developed a national strategy for testing and tracing, a key component in the success of other nations’ containment of the virus. The federal government has refused to coordinate the production and distribution of critical supplies. And in the context of a global pandemic, the US president has taken steps to isolate the US from multilateral efforts to manage the pandemic, which could threaten Americans’ access to therapies and an eventual vaccine.

Within a domestic context, there are some areas in which government has been working effectively and delivering benefits to people. Many state governors have responded to the crisis with decisive action and built public trust through consistent communication. The high level of competence at the state and local levels is not new or surprising, but it has been out of focus in recent years.

The US Federal Reserve was well-prepared for the current crisis, given the number of mechanisms set up during the Global Financial Crisis (GFC) that could be pulled off the shelf. The Fed moved quickly and is using all of its tools at scale.

The US Congress also moved quickly and as of late April had allocated $2.8 trillion in emergency funding to address the health and economic crises. Four separate legislative packages (COVID 1-4) passed with overwhelming bipartisan support. The legislation was imperfect and will require significant oversight, but there was a concerted effort to prioritise relief to small businesses and workers over banks and corporations.

The assistance is badly needed. In April, more than 20 million people applied for unemployment benefits, contributing to 14.7% unemployment – a rate of rate not seen since the Great Depression. Economists and officials within the Trump Administration have indicated it may go as high as 25%.

A fifth legislative package is expected in the near future to support state and local governments facing massive budget shortfalls due to the costs of fighting the public health crisis and the loss of retail-based tax revenue. But this brief period of bipartisan goodwill in the US Congress may be over. The Democratic House recently requested $1 trillion to support states and municipalities, a figure that was immediately rejected by Senate Majority Leader Mitch McConnell as a bailout for Democratic state governments that mishandled their finances.

Further, while the Democratic House continues to work from home, Leader McConnell brought the Senate back into session in the US Capitol on 5 May. McConnell explained that given the pressure essential workers across the country are under to show up for work, it made sense for the Senate to show up. But the decision also suggests McConnell believed he needed to take action in the midst of this crisis to protect the Republican majority in the Senate and President Trump’s re-election prospects.

Public polls and Trump’s own internal polls show him trailing presumptive Democratic nominee Joe Biden both nationally and in swing states. Bringing Senators back to Washington provides McConnell with the opportunity confirm judicial nominees and fast-track presidential appointees. Perhaps more importantly, McConnell’s decision aligns symbolically with Trump’s insistence that the virus has been vanquished, things are on the up and up, and the economy will be back better than ever.

Americans do not appear to be on the same page as the president. They have been broadly supportive of stay-at-home orders, and a sizeable majority have expressed concerns that the economy will be opened too soon. The protesters in the Michigan State Capitol standing too close together brandishing rifles were frightening, but not at all representative of the bigger picture.

Anything is possible in the coming months, but it’s hard to see how Trump wins re-election if conditions do not improve in terms of containing the virus. And it’s hard to see a way for containment efforts to meaningfully improve in that time, given that the states have been left on their own to struggle through the crisis. Localised efforts will work eventually, but progress is likely to be slow and uneven.

The political analyst Ian Bremmer highlighted in a recent column that the US occupies a privileged place in the world economy and will carry many advantages into the post-Covid future. All true – but just how America gets from here to there remains unclear.