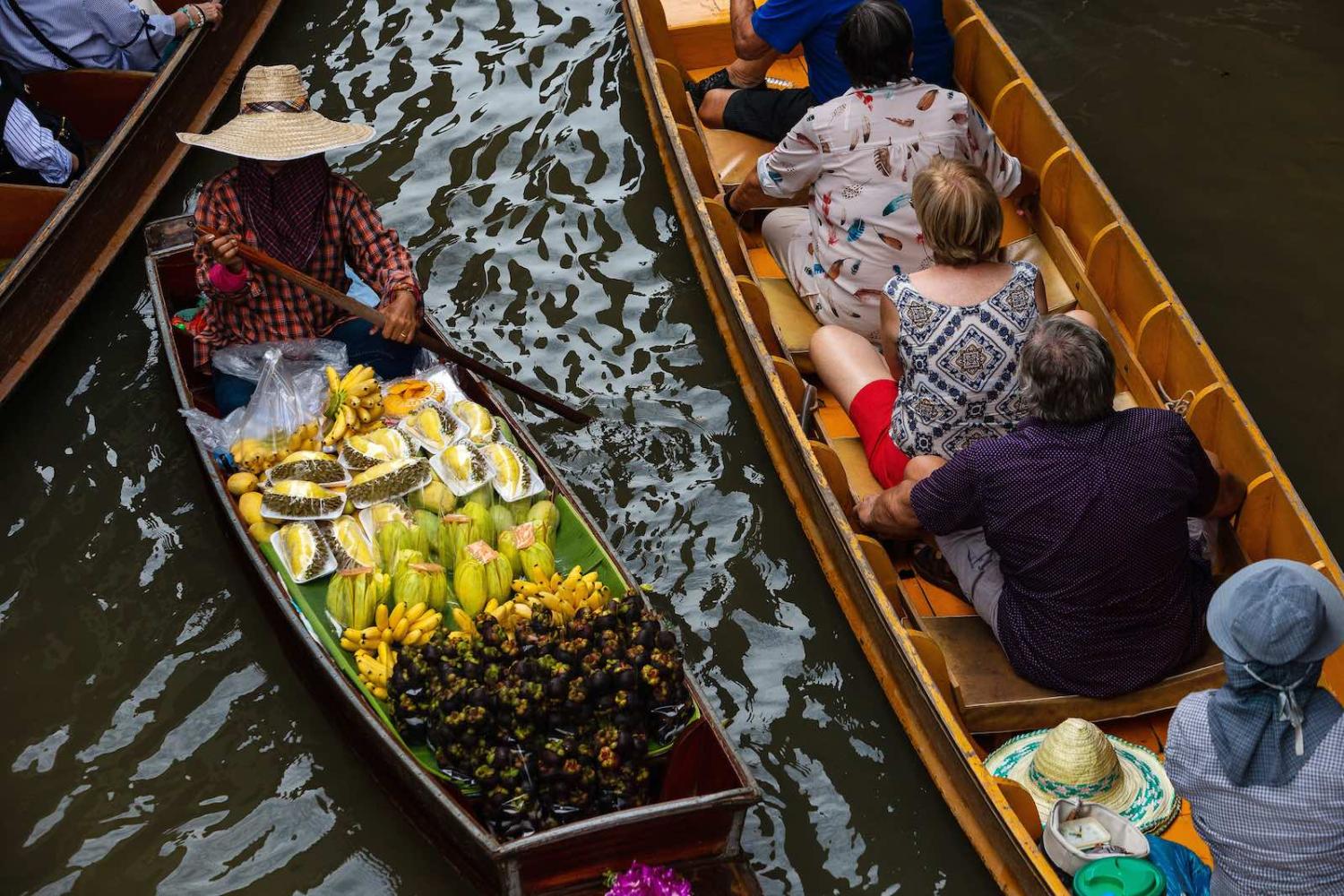 It’s tricky getting everyone pointed in the same direction: a floating market in Damnoen Saduak, Thailand (Photo: Eduardo Leal via Getty)
Published 5 Aug 2019

As the world continues to navigate ever-changing geopolitical challenges, one concept generating more than its share of controversy is the “Indo-Pacific”. When the United States highlighted it in its 2017 National Security Strategy paper, Indo-Pacific was defined as the region starting from the “west coast of India to the western shores of the US”. This extends the former “Asia-Pacific” theatre to include countries not only along the Pacific Ocean but the Indian Ocean as well.

As the idea has begun to gain more prominence in international relations dialogue, the idea of a “free and open Indo-Pacific” - as touted by the United States (along with Japan, India and Australia in their emerging quadrilateral formation) stands in stark contrast to the perception of the Indo-Pacific as adopted by ASEAN.

It is unlikely that ASEAN will step back from its cooperation and productive relations with China – neither will it proceed with any international effort meant to exclude the Asian giant.

For the “Quad”, the Indo-Pacific is a way to bring like-minded allies together in pursuit of a security agenda. More specifically, it is directed against China’s continued rise. This was explicitly stated in the United States Indo-Pacific Strategy Report which points to  “the People’s Republic of China, under the leadership of the Chinese Communist Party” and its effort to “reorder the region to its advantage” where it “coerce other nations” through its “military modernisation” and “predatory economics”. China is seen as a threat to the “rules-based international order” – an order that, according to the US, “benefits all nations”.

Although ASEAN accepted the term “Indo-Pacific” at its June summit in Thailand, it is clear that ASEAN does not share the United States’ understanding of the term. The collection of Southeast Asian countries that have long driven East Asian regionalism embraces non-alignment and equal engagement with all. The ASEAN Outlook on Indo-Pacific, which was agreed upon by the ASEAN countries at the summit, specifically states that its adoption is in the context of ASEAN continuing to play its “central and strategic role” in the Asia-Pacific and the Indian Ocean regions. ASEAN centrality in this case means persisting with the existing infrastructure – such as the East Asian Summit and the ASEAN Regional Forum (ARF), in both of which China is a member.

What is clear is that ASEAN is caught in the middle of the struggle for power happening in its region. ASEAN’s geographic position in the middle of the Asian maritime trade route places it right between India and China. Moreover, ASEAN countries have displayed dynamic economic growth in recent decades, the organisation's GDP growing faster than the world average with real GDP growth of 5.3% year-on-year for the last three years.

The relationship between China and Southeast Asia has remained strong, despite South China Sea tensions, not only because of China’s status as ASEAN’s top trading partner, but also due to its geographical proximity and historical/cultural ties. It is unlikely that ASEAN will step back from its cooperation and productive relations with China – neither will it proceed with any international effort meant to exclude the Asian giant.

Despite the divergence in how Indo-Pacific is understood by ASEAN and the Quad, the acceptance of the term’s usage by ASEAN showcases a stronger focus by the Association on the two large powers (China and the US), and the sharp interest both are showing in the region. From an ASEAN and wider perspective, it may also be asked where countries and organisations not encompassed by the unwieldy Indo-Pacific grouping fall in the equation?

One major player to be considered here would be the European Union. The EU is ASEAN’s second-largest trading partner after China, while ASEAN ranks as the EU’s third-largest trading partner (after the US and China). The maritime route running through Southeast Asia is of fundamental importance to the EU in order for it to access the eastern Asian markets. Aside from economic relations, however, the EU’s strategic presence in Southeast Asia has remained strikingly absent.

ASEAN’s version of the Indo-Pacific might prove to be a dilemma for the EU in its own effort to navigate relations in the region. On one hand, some EU members are major security partners with the United States and have in many instances declared their own opposition to China’s continued military presence in the South China Sea. On the other hand, recent antagonism between the US and its long-time allies has seen countries such as Germany and France openly disagreeing with US international policy, including its approach to sanctions on Iran. Similarly, China has become an increasingly important trade partner for European countries.

ASEAN, for its part, has remained consistent in its approach. The fact that the Association, despite its acceptance of the Indo-Pacific concept, insists on engagement and inclusion and on maintaining the current regional architecture, could be a challenge for the EU. Sure, the EU and its member countries have shown increased interest in engaging with ASEAN – but in doing so they will need to navigate the constantly changing geopolitical currents. The EU will face particular difficulties if it chooses to support the Quad’s version of the Indo-Pacific.

An obvious additional observation is that Australia, although often stating a commitment to ASEAN-centred architecture, faces its own dilemma in deciding between an ASEAN and a US interpretation of Indo-Pacific.

Frank Bainimarama is in a far different position to when he controversially seized power in a military coup in 2006.
Max Walden 20 Feb 2017 17:10

Democracy in Indonesia: A cause for celebration