There is life in the Non-Alignment Movement yet

This 60-year-old Cold War relic is finding new voice as a venue separated from institutions of the West. 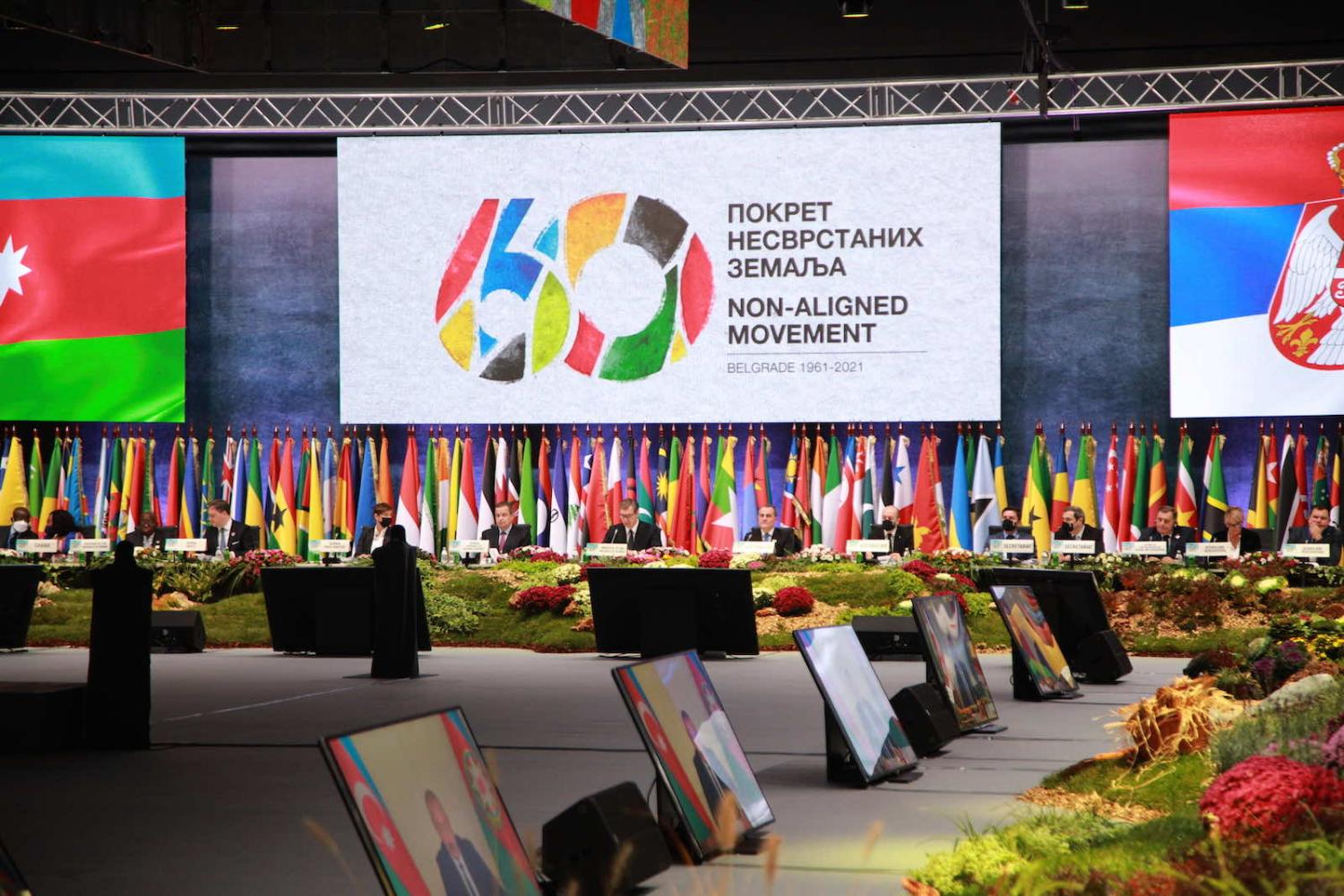 The 11 October summit held in Belgrade, Serbia, for the 60th anniversary of the establishment of the Non-Aligned Movement (Milos Miskov/Anadolu Agency via Getty Images)
Published 25 Oct 2021

The size of the gathering grew from Serbia’s “charm diplomacy” lead by Foreign Minister Nikola Selakovic. Selakovic personally toured NAM members ahead of the summit inviting foreign dignitaries to attend, leading many regional analysts to focus on Serbia’s role and possible regional motivations in organising NAM’s anniversary summit as the host for the fourth time in the organisation’s history.

Yet it was actually the summit’s chair, Azerbaijan, who seemed to pull the strings behind the scenes of this year’s meeting.

Serbia’s foreign minister’s description of NAM as “fresher and younger than before” is likely an exaggeration, yet it is increasingly attracting interest of many non-Western countries.

NAM was “born” in Belgrade, then Yugoslavia, on 1–6 September 1961 and later hosted at the notable venue Sava Centar.* It was the time of escalating tensions over East Berlin between the two superpowers during the US presidency of John F. Kennedy and Nikita S. Khrushchev’s Soviet premiership. Australia’s close Indo-Pacific neighbours – Indonesia and India – together with Egypt and Yugoslavia were then advocating for a “third way” in global politics, non-alignment in inter-state relations (separate from both the NATO Alliance and Soviet-led Warsaw Pact), reforms in global governance, de-escalation of tensions between the superpowers and self-rule for countries seeking the end of colonisation.

In 1960 alone, 17 sub-Saharan nations became independent as well as Cyprus, with the latter being the only European country (apart from Yugoslavia) to support NAM’s establishment.

Notably, the 60th anniversary summit did not include Cyprus, despite Serbia’s close relations with this European Union member, which is part of the quad within the EU that refuses to recognise Kosovo’s independence. Azerbaijan appears to have been instrumental in seeing that Cyprus was not invited, given their tense relations over the status of the North Cyprus and Azerbaijan’s unreserved support for Turkey in the disputes with Cyprus and Greece. Cyprus, on the other hand, sided with Armenia last year on the issue of Nagorno-Karabakh conflict and criticised Azerbaijan.

This development underscores the diplomatic weight and influence of Azerbaijan’s on NAM’s agenda as the current chair, with its presidency extended for another year. In 2019, Azerbaijan’s United Nations delegation attempted to coordinate the activities of NAM’s members at the United Nations Security Council, leading to speculation about whether Azerbaijan has become the de facto leader of NAM.

The actual relevance of NAM continues to be heavily debated. NAM is probably the largest non-Western institution, with 120 members and an increasing number of observer countries and other delegations. Serbia’s foreign minister’s description of NAM as “fresher and younger than before” is likely an exaggeration, yet it is increasingly attracting interest of many non-Western countries – especially from Central Asia ­– as a platform for discussing economic and other types of cooperation, but one that excludes the West.

It is difficult to believe that the diverse range of NAM members and observer states could share the same worldview on major international events.

Russia’s formal acceptance into NAM as an observer state in July 2021 invited questions as to where the organisation is headed. For Russia, NAM represents an opportunity for enhanced bilateralism in a multilateral forum setting, especially since Russia is no longer invited to many international meetings including G7 (formerly G8). Russian vaccines were also a topic of discussion at the Belgrade summit, with Serbia already producing several components for Sputnik V. Russian diplomats made a point to blast EU energy policy, “Western vaccine nationalism”, and promote Russian coal ahead of the upcoming Glasgow climate talks.

Serbia has been distributing both Western-made as well as Russian and Chinese vaccines to its citizens, neighbouring countries and foreigners who have come to choose which vaccine brand to take. Interestingly, soon after the summit, there appeared to be a shortage of Russian vaccines for distribution in Serbia, with observers wondering whether all Russian vaccines were donated to NAM member states in attendance at the summit.

Not coincidentally, an international defence equipment and armaments expo, Partner 21, was concurrently held at the Belgrade Fair. This ensured that Serbia’s Western partners as well as China were present next door at the same time as the NAM summit. This provided Serbia with an opportunity to present itself as inclusive of its other partners as the host nation for both international events, while at the same time showcasing some of its revamped military production and R&D activities.

It is difficult to believe that the diverse range of NAM members and observer states could share the same worldview on major international events. After all, in attendance was Belarus, Iran and Indonesia along with EU candidates or potential candidates (Serbia, Bosnia-Herzegovina) or even EU members such as Croatia. Yet it is clear that Serbian-Azerbaijan’s NAM anniversary summit provided an occasion for new economic opportunities, bilateral meetings, meet-ups and rekindled friendships at the biggest “party” and largest in-person gathering of the Global South in 2021.

The diamond jubilee of the Non-Aligned Movement in Belgrade finished on a high note with many signed scientific deals and other exchanges amongst NAM members. Perhaps NAM has indeed received a face-lift during Azerbaijan’s chairmanship.

* This article has been corrected to note Sava Centar was built after 1961.

The midterm elections this week may change the balance of power in Washington and re-define Donald Trump’s presidency.
Ian Hall 30 Nov 2017 12:02

Advancing the Quad through diversification

Bringing in other states with significant regional interests, such as the UK, may help the quadrilateral security dialogue.
Robert E Kelly 6 Jun 2019 14:00