As Canberra and Paris repair ties, presenting France as a “Pacific country” would undermine regional independence. 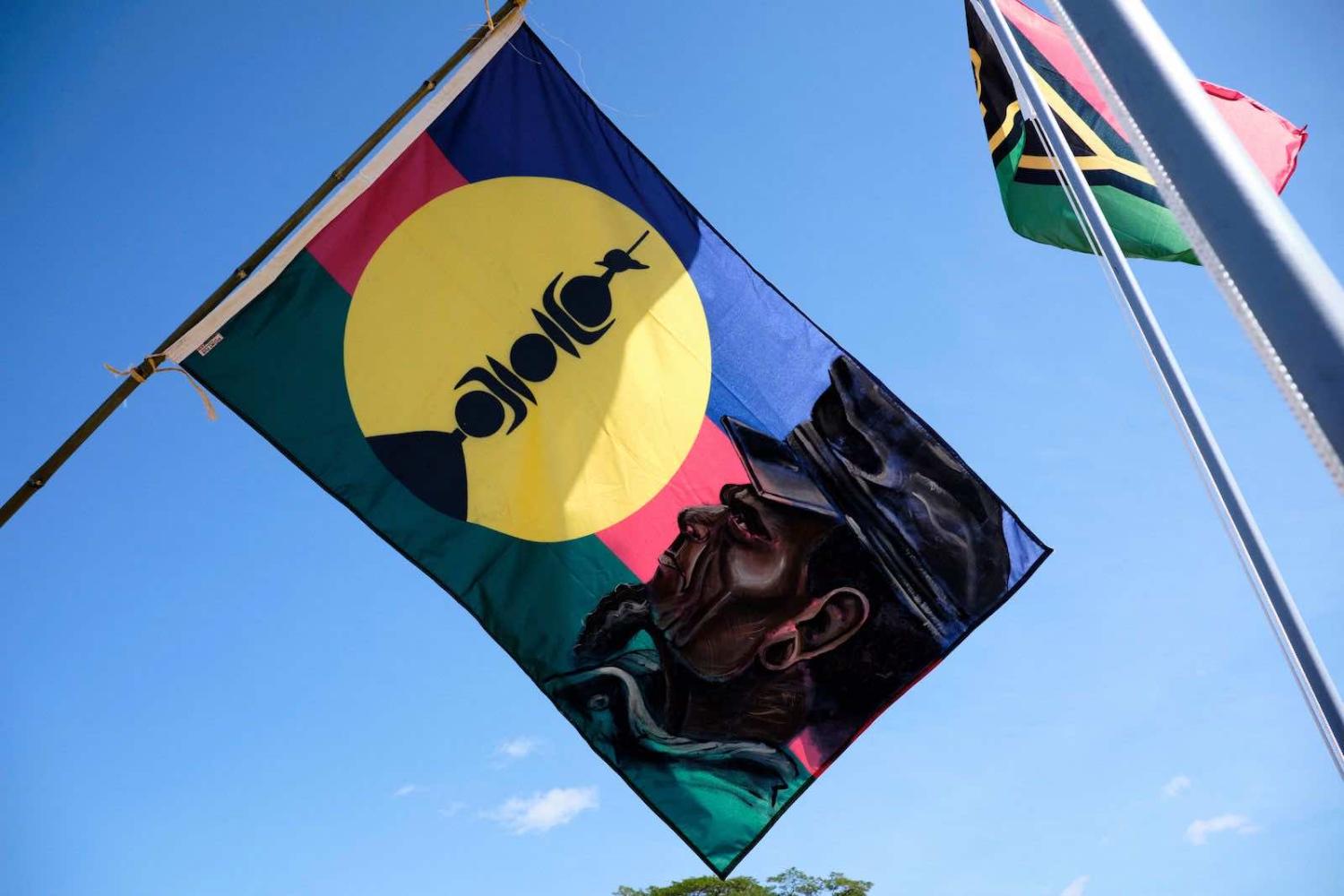 An independence flag picturing the Kanak chief Atai, in La Foa in the French Pacific territory of New Caledonia (Theo Rouby/AFP via Getty Images)
Published 30 May 2022

The newly elected Albanese government has made initial steps to reset its relationship with France, ruptured by the AUKUS agreement and the cancellation of the $90 billion Naval Group submarine contract. But the two countries will soon face dilemmas over France’s opposition to decolonisation in New Caledonia, one of Australia’s closest neighbours.

New Caledonia is largely invisible in the current media furore over China in the Pacific. However supporters and opponents of independence are preparing for crucial negotiations with the incoming French government. The looming talks will focus on the future political status of France’s Pacific dependency, located just 1,500 kilometres off the coast of Queensland.

Last week’s phone call between French President Emmanuel Macron and Prime Minister Anthony Albanese saw the Elysée Palace report that the two leaders “agreed to rebuild a bilateral relationship based on trust and respect to jointly overcome global challenges, foremost among which is the climate emergency and the strategic challenges in the Indo-Pacific.” The September 2021 rupture over AUKUS had been stark – the official policy document “France’s Indo-Pacific Strategy” was revised to remove references to Australia as a strategic partner in the Indo-Pacific region. The updated version noted that Paris had “re-evaluated” the Australia-France partnership, stating “France will pursue bilateral cooperation with Australia on a case‑by‑case basis, according to its national interests and those of regional partners”.

Leading members of the new government in Australia have long seen France as a stable, democratic partner in the Pacific, and the Rudd Labor government signed the first strategic partnership agreement with Paris a decade ago. In April, Richard Marles – now Deputy Prime Minister – said: “France is our neighbour. France is a Pacific country. And as such, France deeply matters to Australia.”

“We no longer want to be stooges of ‘France Pacific’ and the nebulous Indo-Pacific axis.” – FLNKS spokesperson Daniel Goa

For Australia’s Melanesian neighbours, however, France is seen as a European country. They welcome France as a key development partner on climate change and oceans policy, and a driving force in European Union commitments to the region. There is, however, widespread unease about the way the Macron administration rammed through last December’s referendum in New Caledonia, in the face of opposition from Kanak customary leaders and independence politicians. The independence movement Front de Libération Nationale Kanak et Socialiste (FLNKS) mounted a united, disciplined and organised boycott of the vote, challenging the credibility of the poll.

Pacific Islands Forum Secretary General Henry Puna joined a mission to monitor the referendum and in a February interview told me: “My feeling overall was one of sadness at the situation on the ground there. The sadness that I felt was that the voices of the indigenous community were not heard or taken notice of.” Reflecting on the protest that halved voter turnout, Puna said: “I think the option taken by the FLNKS not to participate in the referendum was the honourable thing to do.”

The Kanak independence movement continues to seek political sovereignty and independence, with FLNKS spokesperson Daniel Goa stating in March: “Kanaky-New Caledonia is not a French land as some people think, but a land of Oceania. This land is Melanesian. We no longer want to be stooges of ‘France Pacific’ and the nebulous Indo-Pacific axis.”

Leaders of the Melanesian Spearhead Group (MSG) echo these concerns about the credibility of the December vote, and are united behind the FLNKS as it prepares for new negotiations with Paris. Alongside Papua New Guinea, Fiji, Solomon Islands and Vanuatu, the FLNKS is a full MSG member, though the Government of New Caledonia has long sought to upgrade its role in the sub-regional organisation (a process that may accelerate under current President Louis Mapou, the first pro-independence leader in New Caledonia in nearly 40 years). Fiji and Papua New Guinea are both members of the UN Special Committee on Decolonisation, and play a significant diplomatic role, calling on France to meet its responsibilities under the UN Charter.

For newly appointed MSG Director General Leonard Louma, Melanesian support for the Kanak people is unwavering. In an interview this month, Louma told me: “New Caledonia is still regarded as a non-self-governing territory. France as an administering power has certain responsibilities that it has assumed because of this status of New Caledonia. France has also assumed certain responsibilities under the Noumea Accord. For the MSG Secretariat, we would want to see that France remains honest and faithful to its responsibilities.”

However France’s newly appointed Overseas Minister Yaël Braun-Pivet shows little signs she will act on decolonisation. In her first speech, Braun-Pivet suggested that ongoing colonial administration in the islands is key to France’s wider Indo-Pacific strategy: “Thanks to our Overseas Territories, the sun never sets on the Republic … a Republic that brings its dreams of universality to life through its Overseas Territories.” (my translation)

After his re-election in April, Macron named Sonia Backès as the local representative in New Caledonia for his rebranded Renaissance party. The President of New Caledonia’s Southern Province, Backès is an outspoken conservative and a fierce opponent of independence. The FLNKS are less than impressed that Macron has chosen their political rival to co-ordinate the looming negotiations on political status. Her appointment highlights the tension between Kanak aspirations for independence and France’s colonial intransigence – a tension that poses problems for the new Australian government.

As shown by Foreign Minister Penny Wong’s visit to Fiji last week, the new ALP government has been warmly welcomed by Pacific island leaders, especially for its commitments on climate change, development funding and labour mobility.

There’s a lot of good will in the region, but the Albanese government will soon run into trouble if it presents France as a “Pacific country” and stays silent on decolonisation in New Caledonia. This issue is of significant importance for Australia’s Melanesian neighbours – the very countries that Wong is seeking to woo over Chinese influence. Alongside coal exports and nuclear submarines, there are hard questions ahead for Albanese as he travels to Fiji in July for the Pacific Islands Forum.

Previous Article
War in Ukraine: Gloomy prospects
Next Article
Would China? Australia’s chance to back women police in the Pacific

Security deterrence is only one factor in the new and fast-moving geostrategic environment of the Indo-Pacific.
Adele Webb 13 May 2022 09:00

A policy-free campaign in Asia’s oldest democracy results in a guessing game in the region for where next.
Daniel Woker 15 Sep 2020 06:00