Drones incur the army a small cost but yield impressive results. The challenge is, they're available to everyone.

The first Military International Drone Racing Tournament was just held in Sydney, featuring competitors from across the world, and the Australian Army team did very well. This shouldn’t surprise. The Army has declared that it will soon “be the most unmanned [air vehicle] army in the world per capita”. Three types are drones are to be used in a sophisticated and overlapping structure to support soldiers on the battlefield.

The first layer is in the form of the RQ-7B Shadow 200, the giant of the family. At 200 kilograms, this winged drone is launched using a pneumatic catapult mounted on a trailer and landed on a short runway with simple gear to drag it to a halt.

The second layer is the RQ-12 AeroVironment Wasp AE, a 1.3 kilograms bird-shaped drone. This small drone is hand-launched – essentially thrown into the air – and recovered when the operator forces it into a deep stall, landing on land or in water.

The third is truly a baby ­– the PD-100 Black Hornet Nano. This tiny helicopter weighs only 18 grams and is carried by a solider. All three types of drones carry video cameras capable of day/night operation.

To illustrate how this might work in the field, imagine a patrol is set a task to clear a village. A day or so before, the Shadow would be sent on a reconnaissance mission, flying at some 2000 metres above to gather detailed intelligence, which could include enemy positions, choke points, safe road routes, and the location of obstacles.

As the patrol approaches the village, some 3–5 kilometres away, it launches a Wasp that flies at 200m to update the intelligence picture with the latest information and remains overhead providing organic overwatch and situational awareness.

At the edge of the village, up goes a Black Hornet rather than sending a couple of soldiers in to check for ambushes or booby traps. The Black Hornet flies in at two metres, roughly head height, and is effectively an avatar for the soldiers, zipping down the streets and alleyways and looking through building windows.

When the patrol is finally confident of the tactical situation in the village, it can then enter. In this, the Australian Army is:

The first in the world to proliferate [nano drones] to the conventional forces down to combat platoon level.

To build the whole-of-Army skills necessary for such a comprehensive three-tier system, some 350 low-cost DJI Phantom hobbyist drones are on the shopping list. This will allow every regular, reserve, and cadet unit to operate simple drones, so all can learn to fly and employ them. The intention is that everybody in the Army will be exposed to drone technology and thinking.

There are several implications in all this.

First, the drone rollout has demonstrated how for a relatively small cost an impressive capability can be fielded seemingly quickly. In reality, the Army has been playing around with drones for almost two decades. The three-tier system builds on considerable expertise and experience, using proven ­– if leading-edge – equipment. Fielding innovative force structures takes time and prudent foresight is required.

Second, drones have a short service life, the Army is already setting aside funds for a replacement for the current system. Much of this funding is going to small Australian companies to prove their often-novel concepts and technologies.

Drone technology is accessible to all, state and non-state actors.

Manufacturing such products is now made easier through 3-D printing techniques, but it is really the software in the drone or in the ground control and analysis stations that is the critical aspect. This can be readily replicated once developed. It raises the potential to develop a small drone export industry.

Third, and perhaps most significantly, the proliferation of drones raises questions about the multi-billion dollar project to replace the Army’s 22 Tiger armed reconnaissance helicopters in the mid-2020s. In terms of reconnaissance, the variety of drones now available means Army’s combat units will have Tiger-comparable systems available to them organically and on immediate call.

Moreover, the drones are comparatively small, they make little noise, and don’t readily show up on radars. All this makes them difficult for hostile forces to engage, but much easier to replace than a Tiger if one is shot down. The drones are also much easier to support in the field.

One thing the Tiger can do is shoot. But there have been trials overseas of fitting lightweight weapons to Shadow. Even so, Tiger can always carry larger missiles, and more of them.

However, the Army is also becoming increasingly networked. Drones may be able to feed timely and secure data about targets to artillery units far away, allow them to fire modern precision-guided rounds. Tiger might be replaced by a networked capability, not another helicopter.

Finally, the lesson is availability.

Drone technology is accessible to all, state and non-state actors.

In the last few years, Ukraine has developed some 30 different drones (some through crowdfunding) to support the Donbas conflict. The Ukrainians have rapidly evolved various kinds of reconnaissance and kamikaze-style attack drones, even able to be used in environments where electronic countermeasures are harsh.

In a similar manner, Islamic State acquired numerous low-cost commercial drones like the DJI Phantom and used them for reconnaissance, adjusting mortar fire, and supporting attacks by suicide bombers.

While the Australian Army is undoubtedly now a world leader, others are also moving quickly, perhaps even faster. To keep the combat edge, the Army and the Australian defence industry will need to keep innovating. 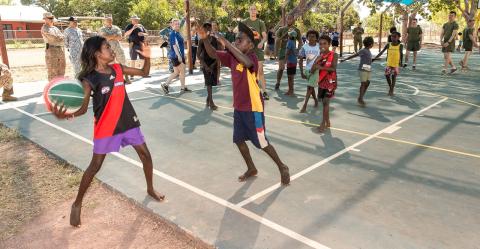