In Bangladesh, Covid adds to a list of maladies

A stalling economy, climate challenges, a refugee crisis, and now a spat with Saudi Arabia make for troubling times. 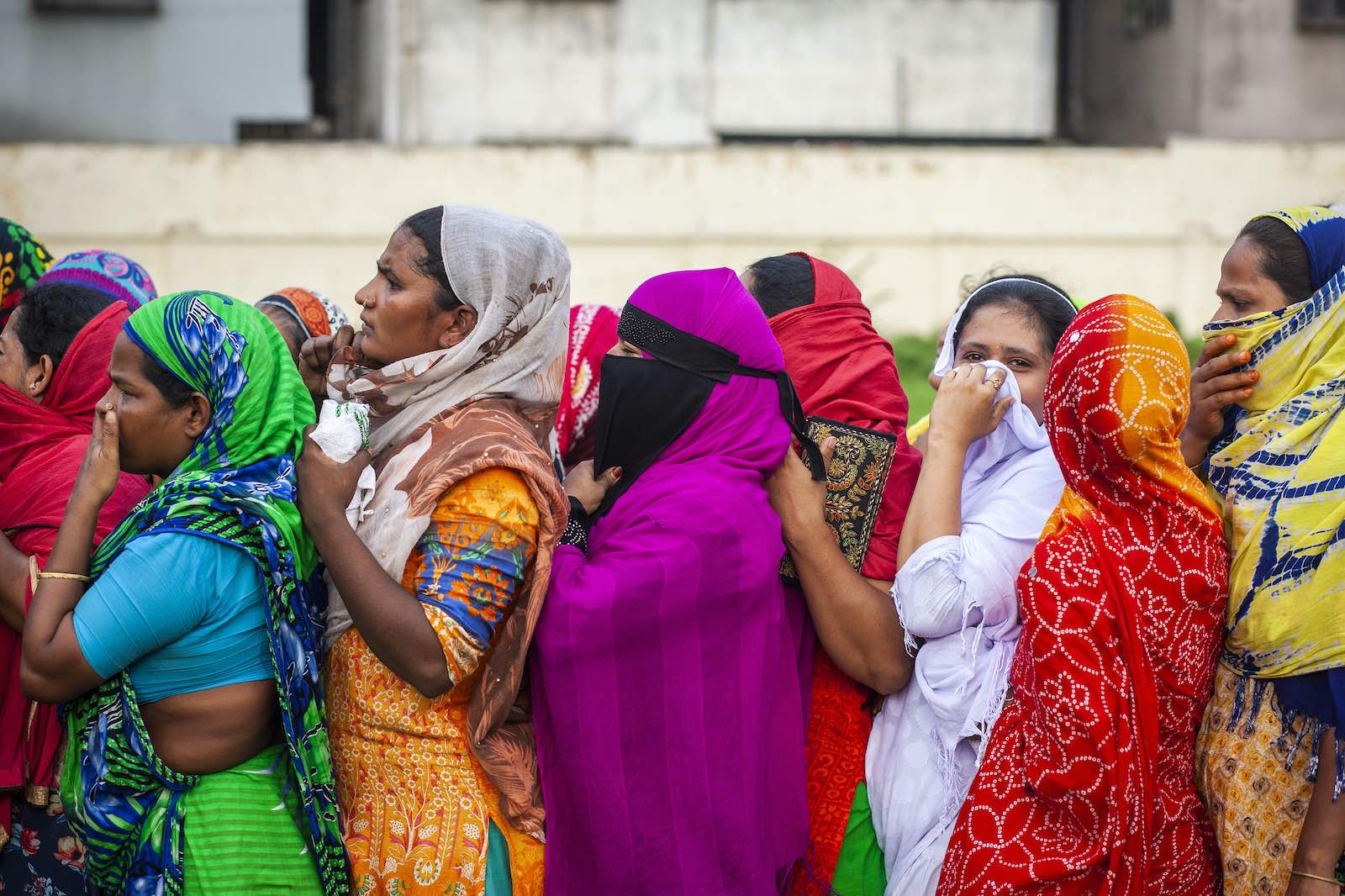 Dhaka, Bangladesh during relief distribution in May (UN Women Asia and the Pacific/Flickr)
Published 1 Oct 2020 07:00   0 Comments

The Covid-19 situation has had a devastating effect on the local economy, the brunt being borne by the country’s export-oriented garments industry. It has propelled owners of various businesses – and that includes the media sector – into showing employees the door, and with rising unemployment follows idleness, and broader consequences unimagined.

Official statistics place the number of those affected by the coronavirus, so far, in Bangladesh almost 360,000. More than 5100 people have died from Covid-19, though there are reasons to believe the figures could be much higher. A particular problem in tackling Covid-19 has been the propensity on the part of large sections of the population to ignore instructions, such as wearing masks and using hand sanitisers. The capital Dhaka remains notorious in that little consideration is being given to the regular instructions handed out by the authorities on warding off Covid-19. Crowds are still seen gathering in markets and roadside tea stalls, with little thought to the ramifications of such unhindered movement.

The malady has not spared a number of prominent Bangladeshis. Among the casualties have been academics, writers, journalists, artists, civil servants, policemen and military personnel. On Sunday, the country’s attorney general died of the disease, which is one more hint of the way in which Covid-19 has been ravaging the country. Yet the disease has also intersected with climate change–induced challenges, which also pose a major threat to the densely populated nation. Indeed, this was a point Bangladesh’s Prime Minister Sheikh Hasina made in a recent article in Britain’s Guardian newspaper and also in her virtual address before the 75th session of the UN General Assembly.

That said, there have been the rather unsavoury truths making the rounds in Bangladesh’s Covid-19 narrative. In recent weeks, corruption related to Covid-19–negative certificates being issued by some hospitals, prominent among which is Regent Hospital, has been exposed to obvious public consternation. The hospital, whose owner is now in prison and who before the scandal broke appeared to be connected to influential people across the spectrum, was caught giving out false certificates to people seeking tests for the disease, without actually doing the tests. The scandal led to bigger questions, specifically on the role of the nation’s health directorate in granting permission to such hospitals, no questions asked and no inquiries undertaken, to handle coronavirus circumstances.

As if Covid-19 weren’t enough, the country has been under intense pressure in other areas. A growing closeness to China has led to a diplomatic strain, displeasing India. Dhaka and Delhi have traditionally had close ties, but recent strains brought on by India’s failure to conclude a water-sharing treaty over the Teesta river and the Indian government’s move for a national register of citizens in its north-eastern region have become pretty pronounced. Fears have persisted in Bangladesh that the citizens’ register introduced by New Delhi could be a move towards pushing into the country people the Indians believe are Bangladeshis who over the years have settled illegally in such Indian states as Assam.

Many Bangladeshis’ views of Beijing’s assistance to Sri Lanka, the Maldives and a number of African nations under the Belt and Road Initiative are none too favourable.

With China, Bangladesh’s relations have been warming in recent years. Development projects have been undertaken with Chinese assistance, factors which predictably have India worried. Bangladesh is also a recipient of Chinese military equipment, which is another cause for worry in New Delhi. Besides, the Chinese have been keen to draw Bangladesh into its Belt and Road Initiative, which again is disturbing, for many Bangladeshis’ views of Beijing’s assistance to Sri Lanka, the Maldives and a number of African nations under the BRI are none too favourable.

For Bangladesh, the urgent requirement is keeping a balance in its diplomacy, a good reason being its belief that China, India and even Russia could be instrumental in a resolution of the Rohingya crisis with Myanmar. With as many as 1.1 million Rohingyas in refugee camps in Bangladesh’s south-eastern Cox’s Bazar region and with little sign of a solution to the problem, Bangladesh is in a straitjacket.

Add to those worries the demand by Saudi Arabia that the 54,000 Rohingyas currently in the kingdom be provided with Bangladesh passports. These Rohingyas have in the past two decades made their way to Saudi Arabia through various means and clearly are not part of the Bangladeshi population. But this demand by the Saudis is concerning for Dhaka, which has 2,200,000 of its workers in the kingdom and whose remittances make an important contribution to Bangladesh’s foreign exchange basket. If now the Saudis tie the continued stay of the workers in the kingdom to the question of a grant of passports to the 54,000 Rohingyas, Bangladesh will feel a new pressure that it will find hard to handle.