The CCP’s discriminatory hukou system is a great obstacle to changing from world’s factory to a service-driven economy.

Book Review: Dexter Roberts The Myth of Chinese Capitalism: The Worker, the Factory, and the Future of the World (St Martin’s Press, 2020) 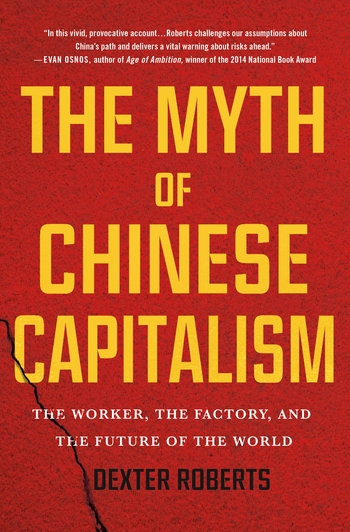 With the US, Brazil and many European countries struggling to manage the Covid-19 pandemic, China seems to be emerging as an even greater economic and political power. But as Dexter Roberts argues in his new book, The Myth of Chinese Capitalism, the Chinese economic model has fundamental flaws which will hold it back.

China’s internal migrant workers and their families, who represent about half of the nation’s population, are treated like second citizens and are unlikely to move into the middle class. Roberts argues this will stop China from achieving its necessary transition to an advanced service-based economy, driven by domestic demand.

China’s rise to global economic powerhouse was based on its role as the factory of the world. Foreign investors, and now increasingly domestic Chinese investors, established niches in global value chains. But China’s factories and construction sites have been mainly staffed by workers who have migrated from China’s rural regions to the towns and cities.

Roberts brings to life the problems of migrant workers, thanks to his more than two decades living in China, including as China bureau chief for Bloomberg Businessweek. In particular, his story focuses on two places: the village of Binghuacun in the province of Guizhou, one of China’s poorest regions, which sends the highest proportion of its youth away to become migrants; and Dongguan, China’s most infamous factory town.

But despite the important contribution of migrant workers to China’s development, they are not entitled to send their children to urban public schools, nor have they access to urban public health facilities. This is because Chinese citizens have long been denied full freedom of movement within their own country. Back in the 1950s, Mao Zedong implemented a household registration system, known as the “hukou”. This small, red internal passport was used to stop Chinese rural citizens from migrating out of their villages.

When Deng Xiaoping launched the reform and opening policies in 1978, China needed a pliable supply of low-cost workers. So rural residents were permitted to migrate to China’s towns and cities. But they were not given access to urban education and health services, which remained tied to their rural hukou.

It is now widely recognised that China’s hukou policy is a source of many problems, notably its immense inequality, as urbanites have gained much more than rural migrants from the country’s rapid development. Further, many migrant workers leave their children in their home villages (“Ieft-behind children”), and often only see them once a year, on the occasion of Chinese New Year. Others go to expensive and low-quality private schools in urban centres. Migrant workers can’t access urban public health services when they fall ill.

In short, the Communist Party’s bargain of continued economic growth in return for political acquiescence is under threat, Roberts writes. And the government is now resorting to tighter social controls.

The Chinese government is well aware of the shortcomings of the hukou system, and has long declared an intention to phase it out, most recently in 2013. But little reform has come to pass – indeed, the whole reform process has stalled under President Xi Jinping, according to Roberts. The boldest efforts have been to allow rural citizens to acquire urban hukous for lesser attractive second- and third-tier cities, but not Beijing or Shanghai.

What is holding back hukou reform? Roberts sees the issue as the huge cost of providing education and health services which are borne by China’s local governments. But another factor is resistance from China’s urban citizens who do not want to share public services with rural migrants.  Roberts reports that there are even cases of Chinese urban residents protesting against hukou reform. More fundamentally, the hukou system can be an effective system of population control, something which can help the government manage social unrest.

Covid-19 is widening the gulf between China’s urbanites and the rural underclass.

The key argument of Roberts’ book is that after four decades of stunning industrialisation, China is facing an enormous transition, from a cheap-labour factory of the world to a modern service-driven economy, more reliant on the spending power of its own people. This is the most important transition since Deng Xiaoping’s reforms began in 1978.

But the hukou system represents a great obstacle to achieving this transition. While the discriminatory hukou system prevents half the Chinese population from entering the middle class, there will never be sufficient domestic demand to power this critical transition.

The urgency of this transition has been highlighted by China’s rising cost structure, Donald Trump’s trade war and now Covid-19, which exploded just after the publication of Roberts’ book (in March 2020). Some factories have been relocating to lower-cost countries such as Vietnam, Bangladesh or Mexico. And in light of Covid-19, some China-based value chains are migrating elsewhere, as advanced countries have become concerned about their reliance on China.

In other words, China can no longer rely on cheap exports to drive its economy. This model has run out of steam, and migrant workers are suffering as a consequence.

What’s more, Chinese migrant workers are being hit hard by the Covid-19 economic slowdown. Many who had returned to their home villages for Chinese New Year, are now being told to stay there, because their jobs have disappeared (even before Covid-19 migrant workers had become less welcome as techological change meant robots replaced what had been manual work). And while fears of Covid-19 continue, Chinese urban citizens’ resistance to living cheek by jowl with rural migrants is only growing.

In short, Covid-19 is widening the gulf between China’s urbanites and the rural underclass.

Roberts’ book is the latest in an extensive literature highlighting the deep fractures in the Chinese economic model. It is always possible that once again China may find an escape to this challenge. But it is also becoming increasingly impossible to ignore China’s deep problems of debt, ageing population, weak productivity growth, social stresses, and the hukou system.

Overall, Roberts’ book makes an important contribution to our understanding of China, and should be essential reading for all China-watchers.

Previous Article
A pivot to globalism, but grievances lurk
Next Article
A crowded house on the Bougainville ballot

Trade figures suggest promises to “have Australia’s back” are yet to be matched by economic solidarity.
John Fitzgerald 19 Apr 2018 06:00

For a party with no interest in popular elections at home, the Chinese Communist Party shows remarkable curiosity about electoral democracies elsewhere.
Charles Dunst, Shahn Savino 27 May 2020 14:00