Can the UK stop the boats? 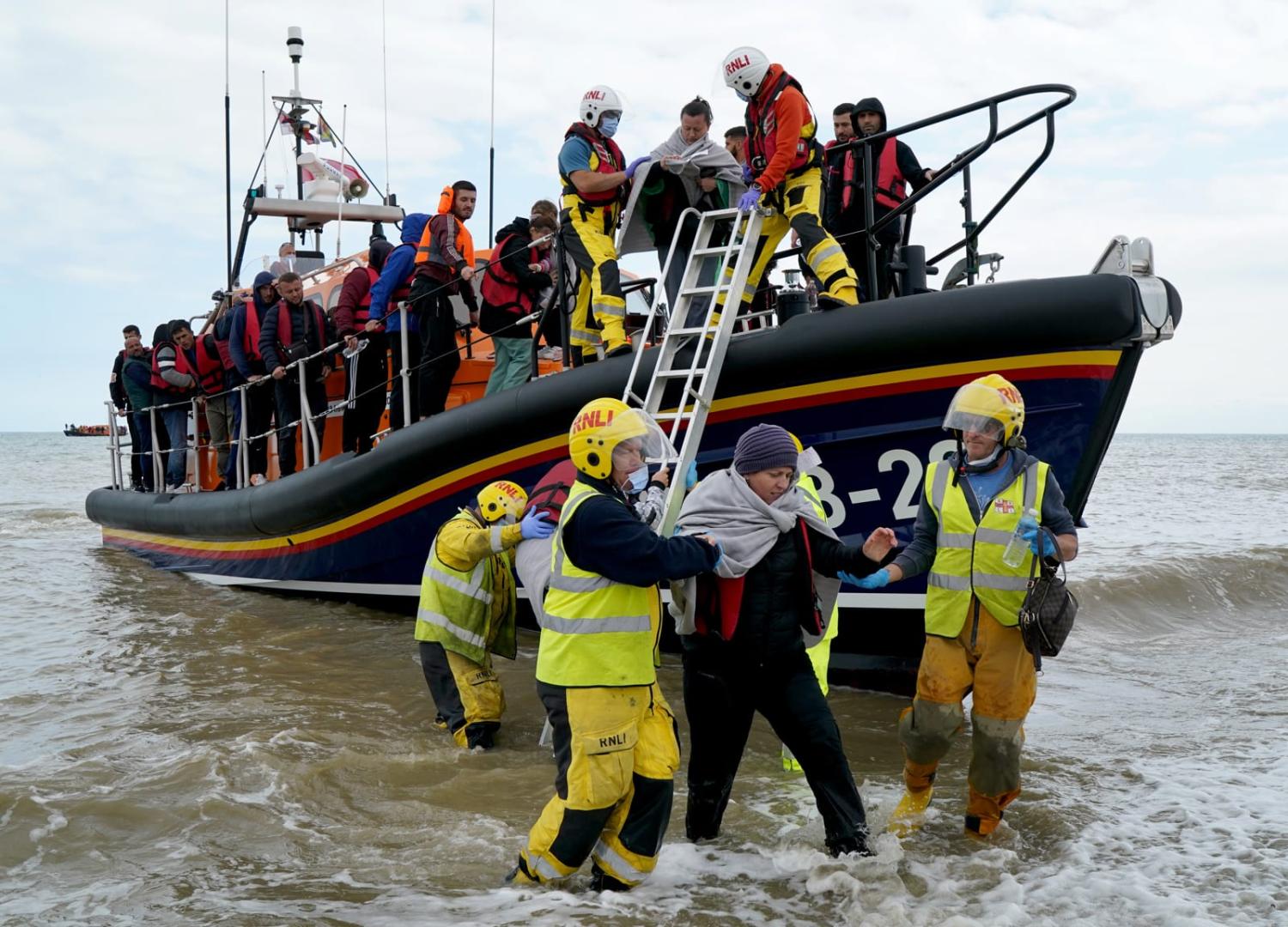 A group of people thought to be migrants are brought in to Dungeness, Kent, after being rescued from a small boat in the English Channel (Gareth Fuller via Getty Images)
Published 2 Nov 2022

Suella Braverman once again became the UK’s Home Secretary, six days after resigning. Braverman remains committed to delivering the Conservative Party’s signature immigration policy of deporting asylum seekers and irregular migrants to Rwanda for processing, asylum, and resettlement. The first scheduled flight to Rwanda, under Braverman’s predecessor, was cancelled at the last minute as the result of a legal appeal, but as well as warning of an “invasion” by asylum seekers, Braverman has spoken of her “dream” and “obsession” to see a flight take off. A report last week that more than 38,000 people have crossed the English Channel illegally this year, and that it is costing over £5 million per day to accommodate them, will stiffen her resolve.

The UK’s Rwanda policy is broadly based on Australia’s offshore processing model; indeed, Australia’s former foreign affairs minister Alexander Downer has joined an independent panel to oversee its implementation in the United Kingdom and earlier this year featured in a Home Office video promoting it. But the settings are so different between the United Kingdom today and Australia when Downer helped negotiate the “Pacific Solution” in the early 2000s, that it is very unlikely the policy can be implemented, and even if it is that it will have the desired deterrent effect.

The right to appeal to UK courts against deportation orders is one of several reasons why, even if a few asylum seekers are flown to Rwanda from the United Kingdom, the policy is unlikely to deter others from still trying.

While Australia effectively limited access to review by Australian courts by excising territories from the Australian migration zone, the United Kingdom has no comparable means for sidestepping the inevitable legal challenges. The Rwanda policy may be illegal. Certainly, the UN Refugee Agency has argued that it breaches the UK’s commitment to international law under the 1951 Refugee Convention, and unlike Australia, the United Kingdom cannot point to a refugee resettlement scheme in mitigation. While the UK High Court did not grant an injunction upon the original Rwanda flight – a ruling that was upheld by the UK Court of Appeal – subsequent appeals to the European Court of Human Rights (ECHR) and UK Court of Appeal did ground the flight. Before the recent political chaos in the United Kingdom, which saw Liz Truss quit as PM, the government was reviewing its legal position. One option being considered was to withdraw from the ECHR, with far wider implications for human rights, including for UK citizens, than limiting appeals by irregular migrants. And in any case, this would not limit their ability to appeal to UK courts.

One of the main reasons Australia has succeeded in “stopping the boats” is that its policy has been implemented absolutely. With virtually no exceptions, former prime minister Kevin Rudd’s pronouncement in 2013 that “asylum seekers who come here by boat without a visa will never be settled in Australia” has held. In contrast, the right to appeal to UK courts against deportation orders is one of several reasons why, even if a few asylum seekers are flown to Rwanda from the United Kingdom, the policy is unlikely to deter others from still trying, undermining the entire exercise. The lack of political consistency is another. In contrast to the bipartisan support for Australia’s policy demonstrated by Rudd, it is almost inconceivable that a Labour government in the United Kingdom would continue the policy, and according to current polling, it is fairly certain that Labour will be in power in the next two years.

Also in contrast to Australia, policy settings are relatively insignificant in determining asylum flows to the United Kingdom. Geography matters – the United Kingdom is separated from mainland Europe by 20 miles or so, and not much more in turn separates mainland Europe from Africa and Asia. History does too – the United Kingdom will always attract migrants from Anglophone countries around the world. As a result, asylum seekers come to the United Kingdom because they have friends or family there, who help pay for the journey, find them jobs and accommodation, and keep them under the radar. The UK government is confronted with a far more finely balanced cost-benefit analysis than the Australian government ever has been – deporting asylum seekers risks disrupting the social contract with millions of settled ethnic minorities.

Legal obstacles to implementing a policy that is unlikely for political reasons to be consistent or sustainable and in any case will not have the desired deterrent effect, means offshore processing will never be the silver bullet in the United Kingdom that it was in Australia. How else to stop the boats? Mechanisms to share the burden with mainland Europe via which all asylum seekers to the United Kingdom arrive, cooperation on dismantling migrant smuggling and trafficking networks, and in the longer term, better control of the informal labour market would make sense.

And at the risk of being trite, all of these were far more achievable before Brexit, which has removed the United Kingdom from the EU’s Dublin Regulation (whereby it used to be possible to transfer asylum seekers to their first country of entry in the European Union), as well as limiting the UK’s access to the database of the EU Agency for Law Enforcement Cooperation (Europol), and significantly reducing low-skilled migration. The UK government that delivered Brexit is slowly being hoisted with its own petard.

Previous Article
From Jakarta to Nusantara: making sense of Indonesia’s capital shift
Next Article
B-52 bombers only part of a very long Australian story

Plans to list the company at the centre of China’s financial and payments network could spark a geopolitical firestorm.
Mark Beeson, Farida Fozdar 20 Sep 2019 11:00