Canada's decision to allow Huawei to participate in its 5G mobile networks is much more political than the PM suggests.

Canada has decided not to join Australia and the United States in barring Huawei Technologies Ltd of Shenzen from participating in the development of Canada’s 5G mobile networks. Canadian Prime Minister Justin Trudeau argued that his government’s decision on Huawei is based “on evidence and data”, and in particular on recommendations from the Communications Security Establishment (CSE), the federal agency that collects foreign signals intelligence and protects telecommunications networks.

Importantly, the CSE noted that it had a sufficiently “robust system” for ensuring that Huawei’s hardware and software would not compromise security. In particular, CSE “white labs” – actually paid for by Huawei itself – conduct tests on the equipment for intercept capabilities.

The Huawei decision actually had a number of important political purposes.

Given these recommendations, Trudeau argued that his government preferred “listening to the experts and trusting them” on telecommunications security. His government, he asserted, was not going “to let politics slip into decisions” on such matters.

In fact, Canada’s Huawei decision is much more political than the Prime Minister suggests.

It is not by coincidence that Trudeau’s comments followed the public efforts by two American senators to shape Canadian policy on Huawei. Marco Rubio (Republican of Florida) and Mark Warner (Democrat of Virginia), both members of the US Senate Intelligence Committee, wrote to Trudeau on 11 October, expressing “grave concerns” about the security implications of allowing Huawei to be involved in Canada’s 5G networks, and urging Trudeau to reconsider the matter and seek additional information from the US intelligence community.

However, these efforts guaranteed that the issue would become politicised, since Canadian nationalist sensitivities are most readily aroused by American efforts to influence (usually characterised by Canadians as “interfere in”) decision-making. Once the senators’ letter was published, Trudeau had no incentive to back down and look as though he was caving to American pressure.

Trudeau’s Huawei comments also need to be placed in the broader context of the renegotiation of the North American Free Trade Agreement (NAFTA) between the United States, Mexico, and Canada. On 30 September, a new agreement was reached, symbolically renamed the US-Mexico-Canada Agreement. USMCA (derisively pronounced by Canadians as “you-smack-a”) contains a provision that required the parties to inform each other if they planned to negotiate free trade agreements with “any non-market country,” and gave the parties the right to terminate the agreement if any of the other parties actually signed a free trade agreement with a non-market country.

This provision under Article 32.10 is pure American posturing. The right to terminate under 32.10.4 is superfluous, because there is also a withdrawal clause in Article 34.6. The real purpose of the clause is to advance the Trump administration’s efforts to contain the world’s key “non-market country” – China. The Canadian free trade negotiators had gone along with the American side’s insistence on putting this bit of posturing into the text as one of the compromises necessary to secure agreement because they were confident that the actual effects of this article would be highly limited.

However, in the days after the release of the USMCA text, it was widely reported in Canada that Article 32.10 was basically a veto on Canada’s ability to negotiate a free trade agreement with China, and thus a limitation on Canadian sovereignty.

The Huawei decision thus had a number of important political purposes. First, taking a stance in sharp opposition to the US (which has, like Australia, banned Huawei and other Chinese telecommunications firms from involvement in 5G networks) allowed Trudeau to paint his government as both willing and able to stand up to Trump, who is widely despised in Canada for a variety of reasons, including his ad hominem attacks on both Trudeau himself and Chrystia Freeland, Canada’s foreign minister.

It also signalled that Article 32.10 was not going to constrain Canadian efforts to deepen economic relations with China. And it allowed Trudeau to underscore his government’s rejection of the pressure by American politicians to “interfere” in Canadian policy-making.

Such political signalling to Canadians has clear partisan purposes. During the free trade negotiations, the main opposition party — the Conservative Party of Canada (CPC) under Andrew Scheer — had taken a generally bipartisan approach, supporting the Liberal efforts to deal with the persistent attacks on NAFTA by Trump. After USMCA had been agreed to, however, Scheer pivoted and politicised the new agreement, criticising Trudeau for caving in to Trump. Likewise, after the Rubio-Warner intervention, the Conservatives also sought to politicise the Huawei issue, deriding the decision as the Prime Minister’s “lack of seriousness about the safety of Canadians”.

Given such attacks from the Conservatives, the Trudeau government — facing election in October 2019 and thus already positioning itself for that contest — has been clearly happy to let politics slip into the decision on Huawei, and encourage Canadians to see the Liberals as stronger defenders of Canadian autonomy than the conservative opposition.

* This article was updated following publication. 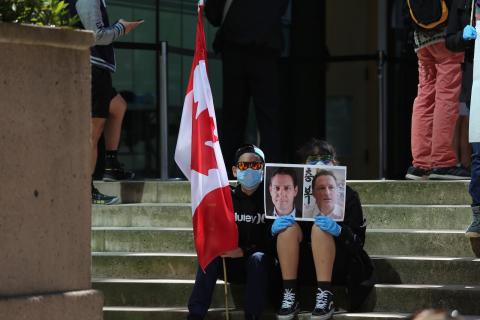