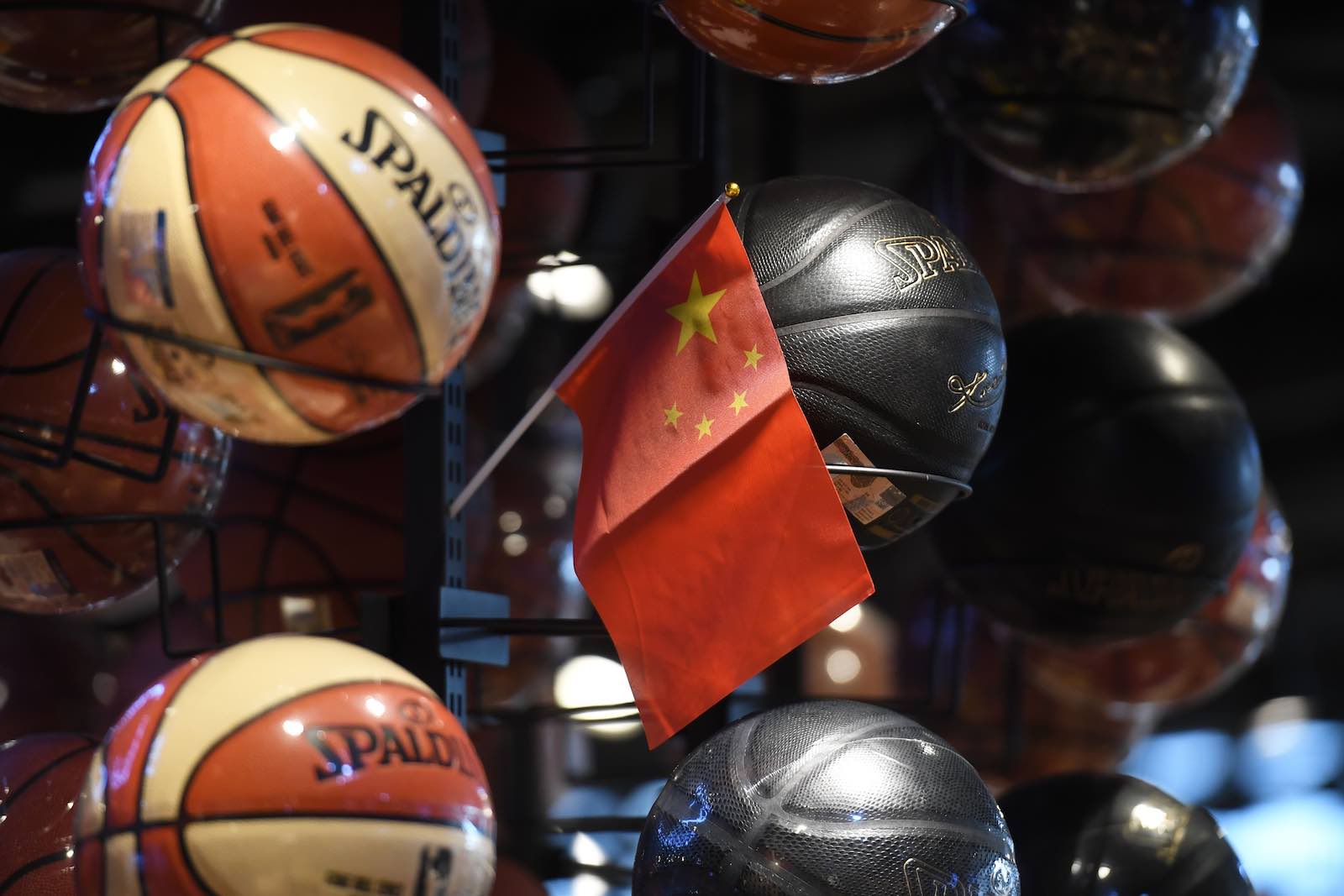 A Chinese flag is placed into a display of basketballs in the National Basketball Association (NBA) store in Beijing this month (Photo: Greg Baker/AFP/Getty Images)
Published 14 Oct 2019 14:30   0 Comments       Follow @nathanattrill

In a week which began with images of Xi Jinping waving at his own giant portrait in a military parade for the People’s Republic of China’s (PRC) 70th anniversary, it ended in an even more surreal manner – with a cartoon Winnie the Pooh being strangled to death in a Chinese gulag. Ordinarily one might not see a connection between these two images, but in the PRC of the “new era”, there is increasingly little room for Western business, popular culture, or sport to engage with people in China on terms the Party does not mediate.

Pooh appears in a recent episode of the long-running satire South Park which accuses Hollywood of pandering to the tastes of Chinese censors for market access, threatening artistic integrity and freedom of expression. Such claims have been made before, but the issue has now exploded into the public consciousness helped along in the same week by a tweet from an official for the NBA’s Houston Rockets showing support for protestors in Hong Kong.

Authorities in China and some fans reacted with typical patriotic displeasure and fury. But now questions over what the NBA should do and say have reached the highest levels of US government, and in one incident getting rare bipartisan agreement.

We are demanding multinational corporations to uphold, defend, and promote our values. That these organisations would not even think to trade free speech for market access should surprise no one.

But multinational corporations such as the NBA “offending the Chinese people” is not a new story, nor is it one that could not be survived with a bit of corporate kowtowing. What is different for the NBA is the timing and its product, a sporting touchstone for both sides of the Pacific in the emerging Sino-American “decoupling”.

These increasingly occurring corporate dramas are not about us. Chinese people are asked every day to choose between loyalty to the Party and something else. This time its American basketball, but at other moments it has been fashionable handbags or international airlines that had the audacity to imply Taiwan was a country. It doesn’t matter what the something is. What matters is the performative denouncements and stitching of this insult into the long tapestry of humiliation at the hands of foreigners which underpins the legitimacy of the Party’s continuing monopoly of power.

The Party is in an ideological conflict with Western liberal democracy whether we like it or not, or whether we call it a “cold war” or not. Ideological competition is back in Xi’s “New Era”, and at last more people are waking up to this fact. The China of World Trade Organisation accession days – when thorny political differences between two systems could be put aside for everyone to make money – are over. The inoffensively named “Document No. 9” published and circulated among top Party organisations in 2013 is explicit in characterising Western constitutional democracy, universal values, civil society, freedom of the press, and efforts to counter the Party’s narrative on Chinese history as potential threats to “split” China and bring about a “colour revolution”. According to the New York Times, this document "bears the unmistakable imprimatur of Xi Jinping".

Chinese leaders feel sufficiently confident – or threatened – in their power that they believe they no longer must hide their capacities or bide their time, as Deng Xiaoping once advised. The time is now for the PRC to make the outside world choose what it values more – its ideology or its access to 800 million patriotic consumers. We in liberal societies are now the ones being asked to choose, and unfortunately we are demanding the wrong people do it on our behalf.

We are demanding multinational corporations to uphold, defend, and promote our values. That these organisations would not even think to trade free speech for market access should surprise no one. They are not structured to have a moral compass which guides decision-making – they look more like authoritarian institutions than democratic ones.

This is what makes them the weakest points for any engagement with China, because they base it on little more than economic transactions where Chinese people are defined as “consumers”, so we don’t have to deal with their politics. This is no longer going to work in a new era of greater political and ideological competition. Yet corporations are still the vanguard for our relations with the people of China when they are not promoters or defenders of liberal values – nor can they be, nor even should they be.

True advocacy for free speech in a world where China is increasingly more assertive must come from civil society and the culture it produces, which may need to challenge the core ideas of the Chinese Communist Party. Individuals must tweet what they want to, because support for liberal values will not come from relying on the NBA or Hollywood, who will continue to find the issue “complex” when it really is not. Expecting corporations to advocate for liberal values is not worth your time, and as South Park’s Stan Marsh puts it: “Anyone who would betray their ideals just to make money in China isn’t worth a lick of spit.”