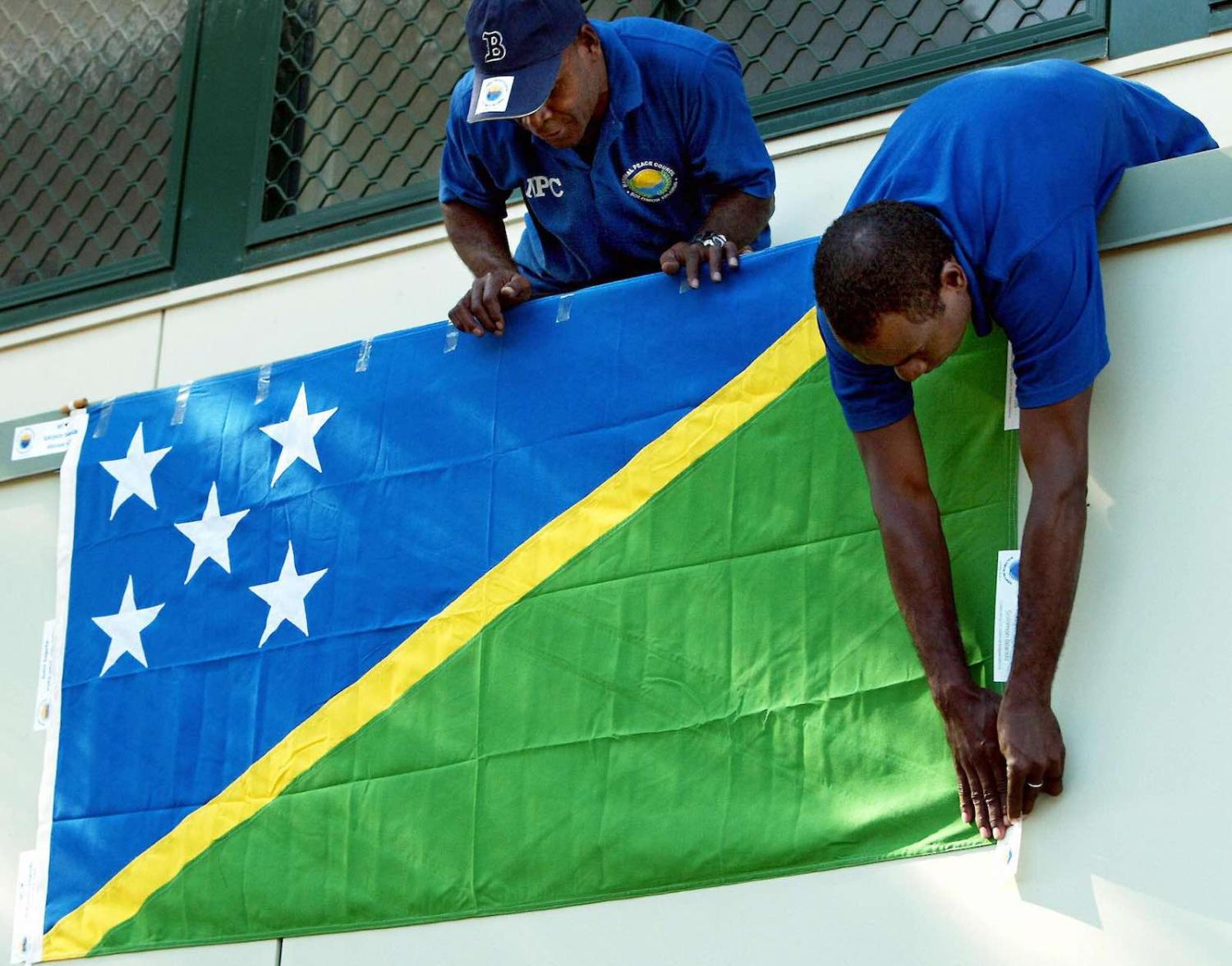 Move now, and get a better deal than Taiwan has ever offered? Or come back later, hat in hand? (Photo: Torsten Blackwood/AFP/Getty Images)
Published 19 Sep 2019     Follow @dailypostdan

“A vacuum simply offers opportunities for others to fill it up.”

That observation was offered by Vanuatu Member of Parliament Johnny Koanapo in a recent Facebook post. The Opposition MP is a former Director General of Foreign Affairs, and has been instrumental in several bilateral and multilateral negotiations.

Koanapo penned a gentle but firm remonstration in response to US ambassador Catherine Ebert-Gray’s statement to the ABC that her government was “deeply disappointed” at the Solomon Islands government decision to switch its diplomatic ties from Taiwan to China. Ebert-Gray is accredited to Papua New Guinea, Solomon Islands and Vanuatu.

No reassurance from the United States, Australia or any other partner has been sufficient to convince Solomon Islands politicians that China will not be the predominant economic and political presence in the Pacific within a decade.

Koanapo’s comments echo sentiments that are widely held in the Pacific. The US government may be disappointed, but it should not be surprised, he suggested. They “simply have to increase their presence here in good times and not just during times of war. They cannot have a proxy presence here.”

The American strategy of delegating direct engagement with Western Pacific nations to Taiwan or Australia – which John Howard once got himself in a tangle about after being tagged America’s “deputy” in the Pacific ­– was never going to achieve its goals, Koanapo suggested.

Australia and New Zealand have not proven as receptive or responsive as they might be to the development needs of their neighbouring countries. Islanders’ expectation of assistance is often crassly characterised as greed, selfishness, helplessness or even laziness – the “I have my chequebook here, how much do you want?” comments of Australia’s former environment minister Melissa Price a case in point. That only shows just how great the gulf can be between traditional Pacific values and Western individualism.

In most Pacific islands, it’s unthinkable – and unconscionable – that the less fortunate should suffer while others thrive. It’s simply axiomatic that we help. In the 1980s, Father Walter Lini dressed the principle up as “Melanesian Socialism” but that was misconstrued by Cold War warriors who failed to realise the emphasis was on the first word, not the second. (This is ironic. Lini was responsible for Vanuatu’s enrolment in the Non-Aligned Movement. It is still a member.)

Many have remarked on the uncertainty created by this transformational moment following Solomons Islands switch, and the potential for far-reaching consequences in the domestic political scene. But Koanapo suggests that “an equilibrium in relations will be achieved at an appropriate time. By then we will have a new normal.”

No one should be surprised by any of this, he adds.

This choice has been simmering for several years and if our friends thought that the signal wasn't strong or important enough then it means there has either been too much ignorance or nobody just cared.

He’s not the only one to observe this. In fact, a recent ABC report that the switch was effectively purchased by an offer of $730 million in infrastructure financing misses a key point. That was the catalyst, not the cause.

As Koanapo suggests, there is reason to believe that Solomon Islands politicians have long felt that a switch was inevitable. No reassurance from the United States, Australia or any other partner has been sufficient to convince them that China will not be the predominant economic and political presence in the Pacific within a decade.

Politicians were presented with a choice: Move now, and get a better deal than Taiwan has ever offered. Or come back later, hat in hand.

This isn’t a zero-sum game for the Pacific islands. Western analysts often discount the mantra that Pacific nations prefer to be friends to all, enemies to none. Whenever that line gets trotted out by Westerners, it’s followed by a wink and a nudge, as if to say, “But they still like us better.”

That shouldn’t be a given, and even when it’s true, it should never be taken for granted. Koanapo writes:

Why would our friends be more [wary] of China without asking France to decolonise our sovereign territories in the Pacific? They took our land and still occupy our space. Nobody thinks that by undermining our sovereignty they are intruding into our peace and making us look more vulnerable.

He concludes: “Let Solomon Islands build their relationship with China, for it is here they may be able to expand their development opportunities. Was Taiwan playing someone's game in the region? We will see more new normals in the years ahead.”

Russia and Turkey: Sometimes strongmen need to get along

Putin and Erdoğan have forgiven all manner of friendship-breaking behaviour to retain their power in Eurasia.