The issue of civilian casualties in the Syrian and Iraqi conflicts has received plenty of media coverage recently. From claims that a mosque was deliberately targeted in Aleppo province with nearly 50 civilians killed, through an airstrike hitting a school housing displaced families in Idlib Raqqa that killed more than 30, to the latest claim that more than 200 civilians were killed in an airstrike in Mosul.

As tragic as they are, civilian casualties are a fact of war. The coalition makes an enormous effort to minimise them, but mistakes will always occur, and the more crowded the battlespace, the more intense the fighting, and the faster the decision-making required, the more likely errors become. When the enemy deliberately uses spaces supposedly protected under International Humanitarian Law as operational headquarters and logistics storage facilities, and deploys in and amongst the civilian population, then the risk of civilians being killed increases. Opposition forces also try to use airstrikes as part of an information operations campaign. They control the information flow in opposition-held areas so it is relatively easy -  using selected imagery, ‘eyewitnesses’, and unsourced reports from advocacy groups - to portray a successful attack against insurgents as a targeting error that kills only civilians.

This is not to say that targeting mistakes don’t occur – of course they do. In September last year, human error in the targeting process led coalition aircraft (Including Australian) to kill pro-regime combatants near Deir az-Zour in Syria. In October 2015 US aircraft destroyed a Médecins Sans Frontières hospital in Kunduz, Afghanistan because of human and technical errors.

Journalists also make mistakes, however, by failing to apply the same intellectual rigour to the reporting of stories involving civilian casualties that is expected in all ­­­­other reporting. Inquiry officers assigned by the military to investigate such incidents have a clear view of such mistakes. The ABC’s lack of rigour in assessing the veracity of very serious claims that Royal Australian Navy personnel deliberately burnt the hands of several Somali asylum seekers is a case in point, as is Dateline’s claims of Australian soldiers killing Afghan civilians based on ‘evidence’ from people who apparently falsified their identities.

Journalists need to file and at times it seems the desire to break a story can take priority over determining the facts of the story. When most journalists have neither practical knowledge nor experience of the targeting process, the possibility for inaccurate reporting or erroneous analysis is plain to see. To determine the facts in operational incidents takes military experience and time because there are often conflicting claims, because operations are normally ongoing, and because determining accuracy is time consuming. Most importantly, it requires access to classified information and imagery that the media do not have for sound operational reasons. The lack of such access means reporters and producers should be wary about presenting as fact accounts gathered in the field.

When I was in the military I conducted around half a dozen in-theatre operational inquiries into actual or alleged instances of civilian casualties on operations in Afghanistan, including one involving a drone strike. I found the drone strike to have legitimately targeted and killed enemy combatants. But doing so required wading through a range of evidence that included statements and deliberate disinformation employed by the enemy to portray combatants as civilians. I gave the greatest weight to evidence that the enemy couldn’t manipulate and that journalists and advocates couldn’t see but in the end it was the mostcompelling.

Given journalists are unlikely to be operating in enemy-held territory they really only have three options for sourcing information; coalition spokespeople and opposition advocates; spokespeople presented as journalists; and more recently some online investigators such as Airwars. The first of these has access to all the information related to the authorisation of the strike but won’t release it, the second are subjective sources, while the last lacks access to the information on which the targeting was based so can only access limited information. It is a difficult area on which to report.

One can pretty well guarantee that no witnesses in opposition-held areas are ever going to come forward after a strike on a formerly protected site such as a school, mosque or medical facility and freely tell a Western media organisation that the building was used by the enemy as a meeting place or operational HQ. The claim in the Washington Post report that only civilians were killed in the mosque complex is based on a UK-based, pro-opposition monitoring group, the Syrian Observatory for Human Rights (SOHR). A journalist at the scene, Mohamed al-Shagal, is quoted without any indication as to who he works for, or what he was doing in the opposition-held area at the time.

For its part, the coalition claimed that those inside the building were not civilians but militants who used the particular building within the complex for training and indoctrination. A site normally protected under International Humanitarian Law loses this status if it is used for military purposes and not for the purpose for which protection was afforded it, and force proportionate to the military advantage to be gained from the attack must be used. This latter point is always a relative measure, and the circumstances in which the commander finds his or herself need to be understood when determining what reasonably constitutes 'proportionate'. From the vision we have, the strike was certainly quite precise felling one building attached to the prayer hall in a mosque complex. Even in this video from the pro-opposition, self-styled journalist, Bilal Abdul-Karim, we can see there was only minor damage to the prayer hall but the adjacent building was dropped (disregard his unsubstantiated claim about frightened civilians being massacred as they ran out of the prayer hall), indicating a very selective choice of both target and munitions.

The report of the deaths of more than 30 people (allegedly civilians sheltering in a school) in Idlib appears to have been based on accounts from SOHR and Raqqa Being Slaughtered Silently, another advocacy group. Lieutenant General Stephen Townsend, the senior US military officer overseeing the campaign has said that, although the investigation hasn’t been completed, he has seen nothing to indicate that the people killed were anything other than Islamic State fighters. The chasm between advocacy groups stating that civilians sheltering in a school have been killed and the coalition commander saying he’s confident they were fighters doesn’t leave much room for interpretation. One or the other is entirely wrong.

What happened in Mosul

The civilian deaths in Mosul are tragic, but also the nature of the terrain that the Iraqi forces are operating in is, as Lt Gen Townsend pointed out, is difficult, as is the operating methodology of IS. Indeed, he exhibited a rather exasperated tone at the line of questioning which he felt was not sufficiently probative of the actions of IS within West Mosul and the choices that such actions left the Iraqi forces and their advisers to make. Regardless, he did say that it would be likely that a coalition airstrike may have been the, or one of the, causal factors in the deaths. Such is the difficulty of trying to accurately make sense of a complex event in the middle of significant urban combat.

Although there has been speculation that these three incidents together indicate a change to the Rules of Engagement (ROE) under President Trump, the reality is the most recent change, that gave a lower level greater authority to request missions, was in December 2016 under President Obama.

There are a range of reasons why accusations of civilian casualties may appear to have increased - as the opposition becomes more pressed, it is quite possible that targeting intelligence becomes more readily available so the process speeds up and higher value targets appear in greater concentrations. Similarly, the opposition is under such pressure from the airstrikes that it takes every opportunity to claim the casualties were civilians (and hence the claimed civilian casualty totals are heavily inflated) in the rather forlorn hope that it may result in an operational pause. A greater presence of US troops supporting the contact battle in urban terrain means that more strikes are called into built-up areas where civilians are unfortunately (or deliberately) caught up in the fighting.

Whatever the reason, media reporting on civilian casualties would do well to approach such stories with a cynical but open mind. The track record of organisations peddling information should be examined and included in the reporting so readers get a sense of the credibility of the claims. First up, reporters should intellectually engage with the targeting process, and the nature of operations being conducted to see whether what individuals claim could be true. This would also help shape the nature of questions that are put to coalition authorities and elicit better quality informtion. And if advocacy groups are peddling misinformation then this should form the basis of a story to the same extent as the mistakes that are made on occasion by coalition forces on operations. These actions would enable journalists can play a role in levelling the information playing field without impacting on their journalistic integrity. 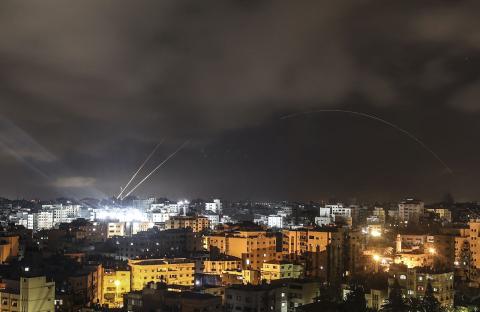 The challenge to the Abraham Accords