Closing the umbrella? The verdict on democracy in Hong Kong

A case against a group of non-violent protestors will be read as a comment on China’s one country, two systems approach. 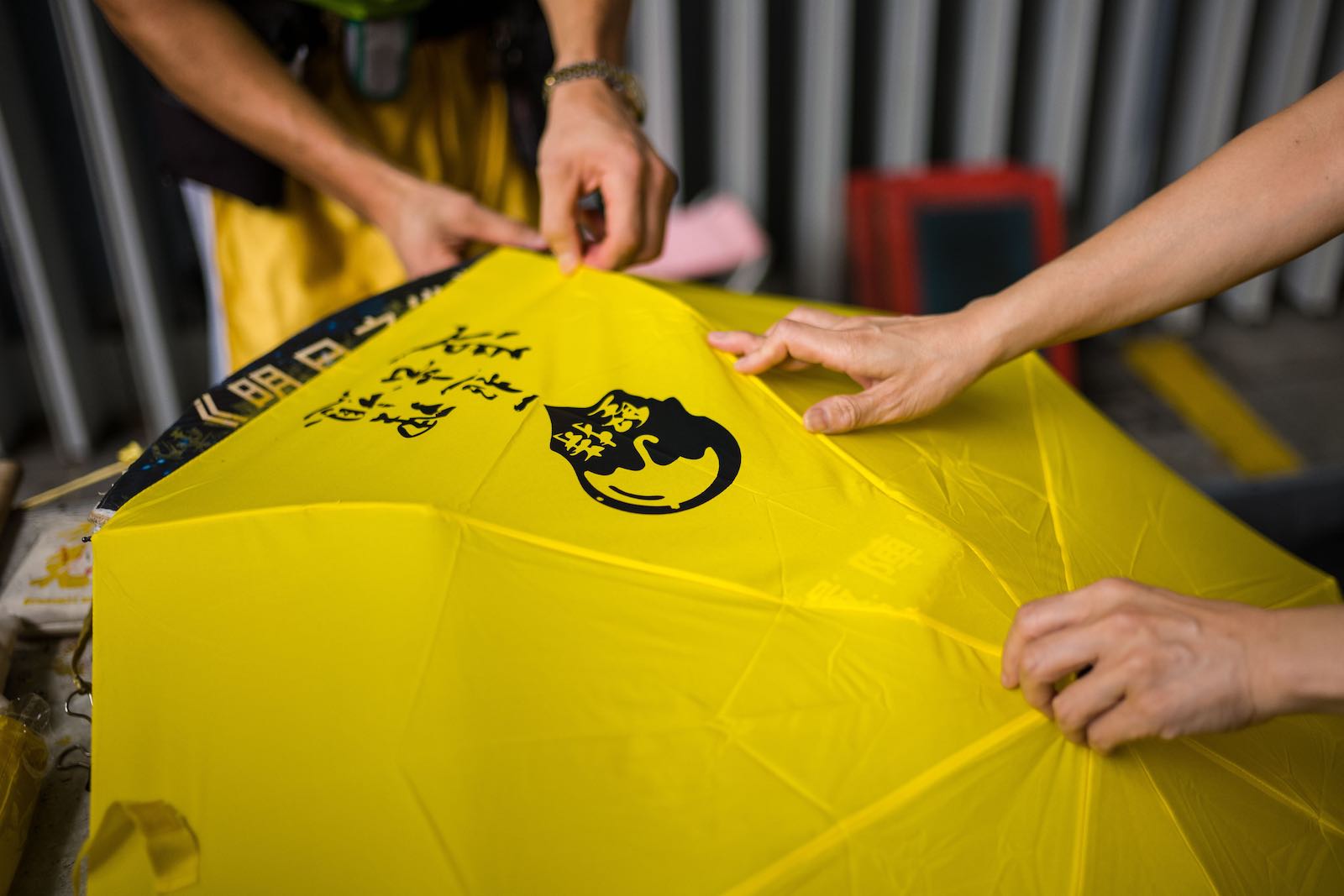 This article is based on the latest episode of the Little Red Podcast, featuring interviews with Chan Kinman and Nathan Law.

In 2014, Hong Kong’s umbrella movement saw 1.2 million people occupy the city’s main roads, calling for greater democratic reform. It became known as the Umbrella Movement when marchers used brollies to protect themselves from pepper spray and tear gas. Despite the protests being absurdly well-mannered – sharing food and medicine, setting up a recycling system and even commissioning art ­– some of the movement’s leaders face court charges that include “inciting people to incite others to cause public nuisance”.

On Tuesday the verdict on nine pro-democracy activists – the Umbrella Nine – is expected to be announced. In the latest episode of the Little Red Podcast, Louisa Lim and I interviewed sociology professor Chan Kinman, a founder of the Occupy Central movement, and Nathan Law, the youngest person ever elected to Hong Kong’s Legislative Council.

Law has already done time behind bars for his role in the movement. Along with two other student leaders he was charged and sent to jail for “unlawful assembly” after Hong Kong’s Department of Justice took the unusual step of appealing their sentence. Unlawful assembly is an easy wire to trip in Hong Kong: a gathering of more than 50 people requires police approval.

The campaigners have faced a raft of legal challenges, with 48 legal cases against 32 different pro-democracy activists.

The charges facing Chan are serious. The retired academic, who confirmed on the program for the first time that he was offered political asylum, faces up to seven years in prison on a “public nuisance” charge that dates from colonial times. The irony for Chan and the other founders of Occupy – legal scholar Benny Tai and Reverend Yiu-Ming Chu – is that they were often at odds with student leaders, calling on them to abandon the occupation before its end. On the first night of mass protests, they even urged demonstrators to leave; fearing police would graduate from tear gas to bullets.

The campaigners have faced a raft of legal challenges, with 48 legal cases against 32 different pro-democracy activists. The crackdown is working on Hong Kong’s campuses. Chan explained, “the chilling effect is already here. It’s more difficult for college students to organise their student council, because they will be on a blacklist immediately once they take office. It’s too costly for many.”

Yet the most worrying cases of interference are extra-legal. Hong Kong’s Chief Executive during the movement, Chun-ying Leung, recently took to Facebook to ask of an electronics company that advertised in the pro-democracy Apple Daily, “Should we believe in a company that put up ads in such a newspaper?”

More disturbing is the everyday harassment that Law and Chan experience. Chan said:

I’ve got piles of letters threatening my life. Some with razor blades. Also phone messages saying they are going to rape my wife, my daughter. I have been followed for quite a long period of time. Even my daughter who was quite young at the time … Some hit man culture is developing in Hong Kong, gangsters used to harass us during fundraising events or even during July 1 [the anniversary of Hong Kong’s handover to China] rallies.

CY Leung, our former chief executive, introduced mob culture into our politics. When we were campaigning outside his assembly there were a group of gangsters coming out, wearing black masks and just freely punching pro-democracy protestors … When you have rallies they will have counter rallies, yelling at you, screaming at you, and sometimes [physical] conflicts. It is a really poor culture, only in authoritarian places you can see these kind of organised anti-campaigns towards liberal and democratic rallies.

Aside from revealing the darker side of China’s one country, two systems approach, the Umbrella Movement opened demographic divides – while students took to the streets, their parents were largely dismayed. The community was split, with two in five Hong Kongers against when the last protestors went home. A common refrain is that the movement did more harm than good, provoking a backlash from Beijing and reducing pro-democracy voices in the legislature.

they had been hoping for democracy for so long, reality is hard to take. We don’t see the future of democracy particularly when Xi Jinping is still President. But [it] always took years to fight for democracy. In South Africa it takes decades. In Taiwan, also decades to succeed, and many people have to sacrifice during that time.

Nathan Law is sanguine about the movement’s prospects. He concedes today’s first year students “were only 14 [during the protests], at that age – at least for me – you don’t care about what’s happening in society, they only care about their friends and dinner.” Yet his pro-independence Demosistō movement finds millennials through Facebook and Instagram even as traditional media outlets are silenced. “We use the software they understand the most to reach them. We’ve got a lot of new blood in our organisation.”

Perhaps because of China’s efforts to strengthen national education and mandate respect for China’s national symbols, feelings of national identity are not moving in a direction that will please Xi Jinping. A survey of Hong Kongers reveals love for Cantonese and Victoria Harbour by night, paired with coolness to Mandarin and the People’s Liberation Army. Less than four per cent of young people identify as “Chinese” or “broadly Chinese”, down from over 30% in 1997. Many see Hong Kong and Chinese identity as contradictory.

Tuesday’s verdict, passed on a group of non-violent protestors, will send a signal about how serious that contradiction has become.