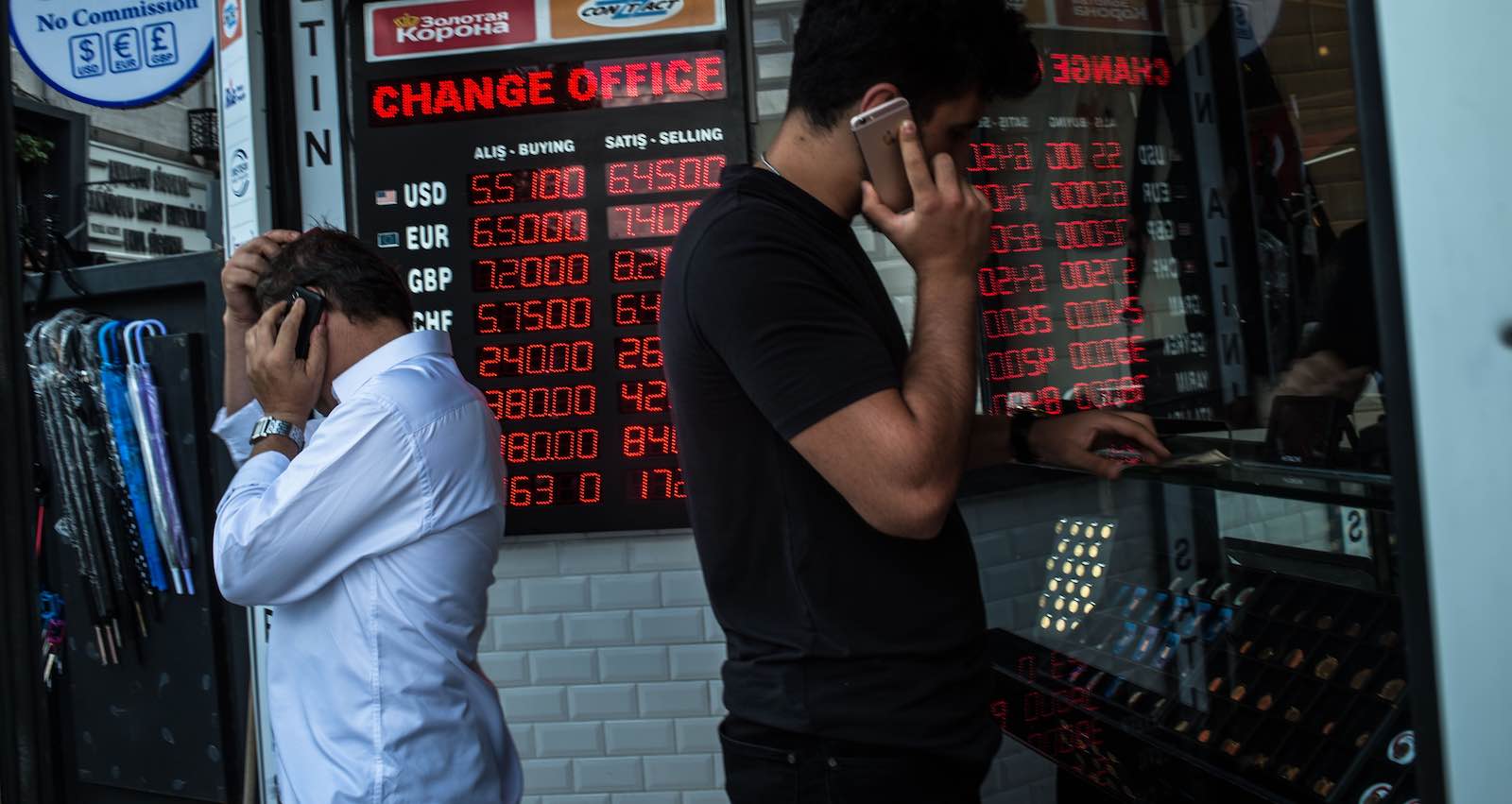 Hours before the Thursday’s decision by the Central Bank of Turkey to raise its benchmark rate 625 basis points to 24%, President Recep Tayyip Erdogan launched into one of what is now a trademark tirade against higher rates. He denounced interest rates as “a tool of exploitation” analogous to the “heroin trade” – and the Turkish lira tumbled in value in response, just as it did when the Turkish strongman decried interest rates as “the mother and father of all evil” back in May.

Turkey’s economy has been in free-fall in recent months, the currency losing 40% of its value against the US dollar this year.

This time, however, the lira made back its lost ground once the central bank bowed to conventional economic wisdom, in contrast to when it held rates steady in July. Nonetheless, global markets continue to watch Erdogan’s economic mismanagement with great concern, not least because European lenders are exposed to Turkey with over $160 billion worth of loans.

Turkey’s economy has been in free-fall in recent months, the currency losing 40% of its value against the US dollar this year. Investors struggle to understand whether Erdogan actually believes his own bizarre assertion that higher interest rates lead to higher inflation. Yet Erdogan is serious, as it becomes clear by closer examination of the two orthodoxies that appear to influence the Turkish president’s thinking.

First of all, Erdogan’s Islamist worldview goes beyond the traditional Muslim belief that riba (interest or usury) is haram (forbidden). Erdogan has often referred to an “interest rate lobby” in speeches when pushing for lower interest rates from the central bank, and he is loath to hike interest rates or agree to a bailout from the IMF. Many interpret the phrase as simple short-hand for financiers and bankers.

However, the reference to a mysterious lobby appears to take on a different complexion when considering the view of Erdogan’s political and ideological mentor, Necmettin Erbakan, himself a former prime minister.

Erbakan saw interest rates, or the “interest rate lobby”, as part of a deeply anti-Semitic and conspiratorial thesis to control the world. In Erbakan’s view, Zionists control all governments through a mix of institutions, including the United Nations, Bilderberg Group, and Council on Foreign Relations. Erbakan asserted that Jews control the economy by “driving countries into economic crises and then lending their governments money at exorbitant interest rates”.

In this light, Erdogan’s blame of the 2013 protests in Gezi Park on the “interest rate lobby” appeared to carry a much darker and more sinister message.

The second orthodoxy to which Erdogan adheres has less to do with the transcendental and more to do with everyday politics. Since his ascent to power in 2002, Erdogan has reached out beyond his narrow Islamist base to build a substantial support and patronage network for his surprisingly well-choreographed crony-capitalist regime. Low interest rates helped to inflate and sustain the real estate bubble at the core of Erdogan’s complex system for funding his political enterprise and distributing the spoils.

The allocation of lucrative construction and infrastructure contracts to loyalists has become a key political tool for the government, allowing Erdogan’s cronies to grow rich, forming a new elite, while the general population benefited from a housing boom. Yet nearly 90% of the credit for these projects came from loans in foreign currencies.

Now, with the lira’s massive devaluation in 2018, servicing that debt has become incredibly difficult, if not impossible, for Turkish companies. To protect the new elite that he created with the aid of foreign currency loans, Erdogan likely had to sign off on the central bank’s decision to hike the benchmark rate, even as he ranted against it.

What we are seeing is the strange interplay between Erdogan’s two orthodoxies. He appears to feel backed into a corner. Erdogan did his best to keep interests low, which in turn helped construction bosses to keep mortgage payments low, and residential and commercial units affordable. But low rates also had the effect of devaluing the Turkish currency, making foreign currency debt servicing impossible, bringing construction magnates to the verge of bankruptcy. Thus, one of Erdogan’s two orthodoxies had to give way.

Erdogan’s dual orthodoxies are resonant at times, and dissonant at others. But what matters most is that both are dragging the Turkish economy to ruin. Unless the Turkish government returns to conventional economic wisdom, the country will continue to be plagued by Erdogan’s personal demons, pitting the requirements of proper economic management against obsessions ranging from the conspiratorial to the corrupt.

Luckily, Turkey still has a pool of talented but sidelined economists, with a proven track record in earlier crises, who can pull the country out of this quagmire. Yet, given Erdogan’s dual orthodoxies, the relatively simply decision to put them back in charge may be beyond him.

Show Comments
Previous Article
Belt and Road: more than just a brand
Next Article
We already have an agricultural visa