Making progress after the overwhelming independence ballot is as much a question of bureaucratic mechanics as politics. 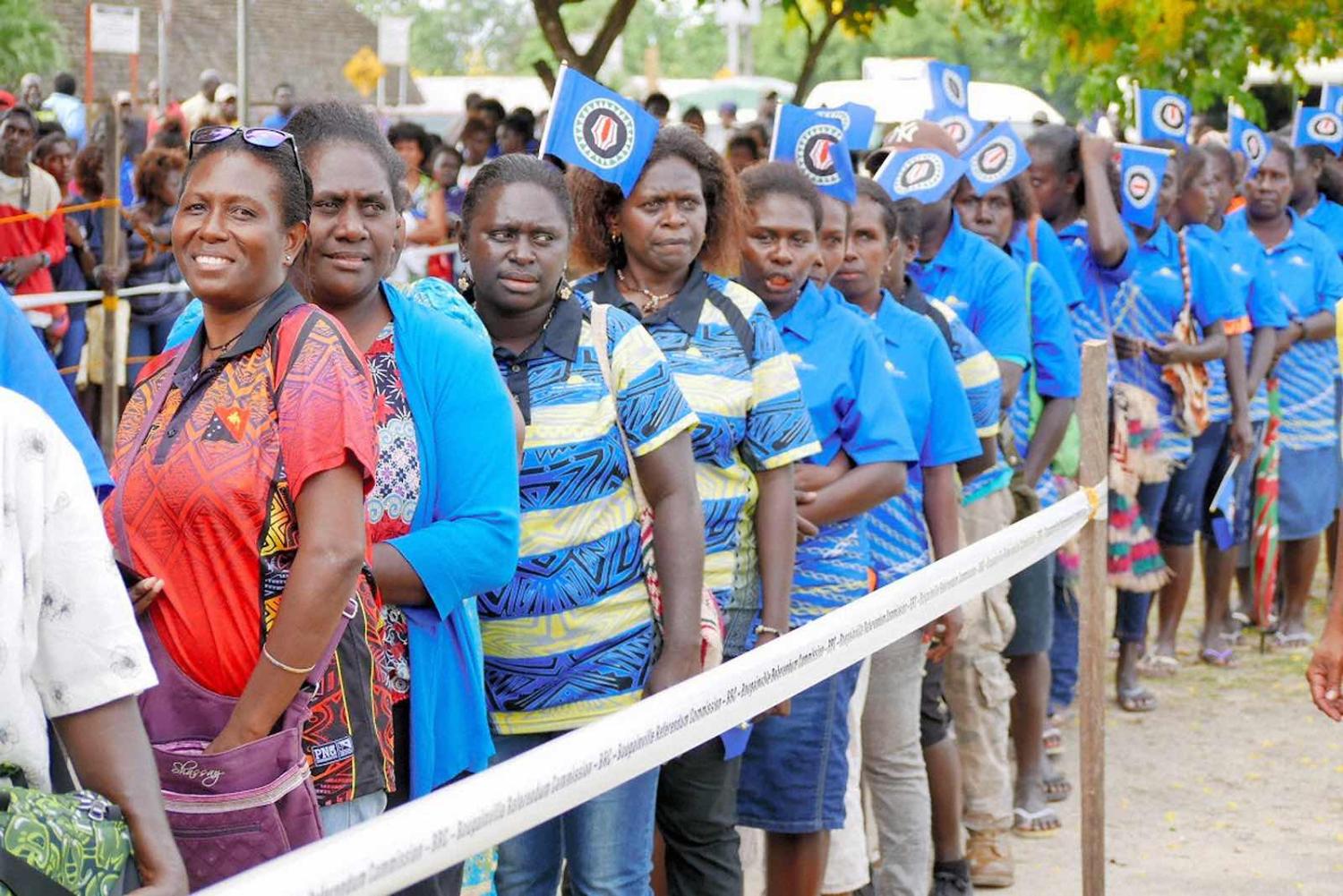 Getting ready to vote during the Bougainville independence referendum in November 2019, Buka (The Asahi Shimbun via Getty Images)
Published 8 Jul 2020     Follow @GordonPeake

Campaigns for presidential and parliamentary elections are underway in the Autonomous Region of Bougainville. A three-week poll commences in mid-August with results expected by mid-September.

No matter who will be the president or members of the 39-seat House of Representatives, a daunting task awaits – meaningfully progressing last December’s 97.7% vote for independence.

As per the Bougainville Peace Agreement and the constitutional laws that implement it, the referendum vote was non-binding. The next step is for the two governments to consult and bring results of that consultation to the parliament of Papua New Guinea for final decision.

Nothing much has happened since. Covid-19 is one reason but an incomplete one. In the early part of the year, the Bougainville government expended much of its energy attaining a constitutional amendment to enable sitting president John Momis to run for a third term. The change necessitated a two-thirds majority in parliament. That threshold wasn’t met, and so the government took the matter to the Supreme Court of PNG, arguing that the region’s own constitution infringed the president’s human rights. The Supreme Court found 4-1 against it.

Leaders of Bougainville and PNG have got together formally only once since the referendum result but did not descend into too much detail regarding next steps. The headline outcome of their one-day confab in March was to change the name of future meetings, from a Joint Supervisory Body to a Joint Consultative Body.

The big questions that will await Bougainville leaders are four-fold: “what”, “who”, “how” and “when”.

First, what. The Peace Agreement is silent on what consultation means and what the parties should talk about. There are many potential starting points for consultations. Here’s a few:

There’s no right or wrong place to start. What matters most is to start somewhere.

When it comes to progressing consultation, international players are coy. The official line is a variant on “not wanting to be seen to interfere in an internal matter”. Yet this wasn’t always the case.

This question of “who” is often overlooked. Who exactly is going to do all the work that such consultation would require? Who is going to develop the position papers, work up the exposure drafts, oversee the grinding, fiendishly complex, and eminently necessary minutiae of bureaucracy, policy and law. It’s by no means an exact parallel but when United Kingdom and European Union leaders negotiated the first hurdle of Brexit, each side had battalions of bureaucrats behind them beavering away and bought in additional expertise where necessary. Few bureaucrats anywhere in the world could straightforwardly take on such a challenge as negotiating new governmental arrangements, and that includes the public servants of Buka and Port Moresby.

Could the international community help out in the consultation phase? Bougainvilleans and Papua New Guineans deserve the lion’s share of credit for the referendum’s success but Australia, New Zealand, Pacific Islands Forum, the United Nations and others leaned in too, providing funding and technical expertise when required. This has also been evident for the 2020 Bougainville polls, including efforts to make sure the ballot papers get there.

Yet when it comes to progressing consultation, international players are coy. The official line is a variant on “not wanting to be seen to interfere in an internal matter”. Yet this wasn’t always the case. Australia, New Zealand, Pacific neighbours and the UN all played important roles in nudging previous chapters in the process. Alexander Downer, as Australia’s foreign minister, is credited with breaking a logjam in the talks that paved the way for the Agreement to be finalised in 2001.

Assuming that the implicit policy isn’t a preference for consultation dragging on ad infinitum, what would be useful at this juncture might be to commission relevant expertise to prepare draft documents with concrete options for how Bougainville and PNG might tackle the issues at play. The parties would be free to adopt or discard such drafts as they choose. But what such documents would do is concentrate minds and provide consultations with a frame – and at the very least help parties work out what they don’t want. Or how about providing some options as to how to move forward with implementing some of the reviews and recommendations tabled over the years, including a 2017 Tax and Revenue Summit and a comprehensive 2018 review of the governmental arrangements by independent experts that, in the words of President Momis showed “we have excellent laws, but we fail to administer them.”  This review is not yet public and the two governments haven’t got around to discussing its findings.

This points to the next challenge. The modalities of “doing” the consultation is another question – how?

There is no guide for how consultations should work. Last year, the United Nations facilitated a Post-Referendum Planning Task Force. Gathering together politicians and public servants with support from a few technical advisers in 2019, the Task Force met over a few days most months in big meeting rooms in Port Moresby. I attended many of the meetings as an adviser to the Bougainville government.

Such a format was good for building confidence and affirming status but having 50–60 people in any room isn’t conducive to achieving concrete outcomes. One option could be fewer people involved but over more concentrated periods of time. How about starting the process over Zoom? Again, having document drafts to hand would help provide focus.

Finally, the “when” question. Parliamentary elections in PNG will take place no later than mid-2022. There’s not a lot of time to waste to make at least some progress before attention turns to these polls.

One thing is for sure. A 97.7% degree of engagement will be required in the months and years ahead.

Previous Article
Yes, to balance China, let’s bring Russia in from the cold
Next Article
Costly cargo: The plight of seafarers in a pandemic

If the Morrison government is on board with reducing emissions, as it seems to claim, it needs to step up its policies.
Bret Walker 29 Nov 2017 09:30

The story of “post-Wall” Central Europe is not simply a straight line from liberalism’s triumph to its collapse.