Convention likely to win out in Trump-Xi meeting

The issues Trump and Xi do not discuss may be as telling as those they do.

Of all the startling events of the Trump Administration's first three months, the one most consequential for the rest of the world is quite likely the meeting between Trump and China's President Xi Jinping at Mar-a-Largo, beginning Thursday.

The importance of this meeting is not any likely outcome, but that it is taking place at all. And even within the meeting itself, the issues the two leaders do not discuss may be as telling as those they do.

With Trump (though certainly not with Xi), it is always possible the encounter will veer wildly off script. But the run of recent changes suggests the Administration is tracking far closer to conventional expectations than it earlier threatened. White House advisor Steve Bannon has been dumped from the National Security Council, the Administration is no longer well-disposed to Soviet Syrian ally President Assad, and many cabinet-level nominations have gone to veteran right-wing Republicans who are now, in the context of contemporary Republican Party politics, mainstream. The most ferocious of Trump's campaign proposals, including punitive tariffs on China and Mexico and the declaration of China as a currency manipulator, have dropped off the radar.

Trump is becoming more conventional, and the meeting with Xi enacts one of the oldest conventions in diplomacy – the highly scripted meeting between leaders. It would be a very unusual meeting between two heads of such powerful states, in the full glare of global publicity, if anything happened at all that had not already been already agreed between Chinese and US officials. The choreography will have been rehearsed. If there is a press statement at the end it will probably already have been written, at least in draft.

Between these two great countries, between two such powerful leaders, accidents, embarrassments, and the unforeseen cannot be permitted – let alone anything that might be described as 'failure'. Public conflict will be minimised. Both leaders have vastly too much at stake.

It has probably already been agreed that each leader will walk away with something for his own constituency. Trump may claim to have talked tough on North Korea, with actual outcomes unspecified. He may say that China has agreed to discuss an agreement permitting bigger US investment in China, without mentioning that these negotiations had begun under his predecessor. He may well be able to claim credit for more Chinese investment in US manufacturing, for more Chinese purchases of major US products such as passenger jets, small gifts which President Xi will bring with him. Trump will be seeking 'reciprocity' from China in trade and investment, a term Xi is unlikely to contest. He, too, will be seeking 'reciprocity'.

For his part, Xi will wish to say that as a result of the meeting there is now a negotiating framework in place to discuss outstanding trade issues, that both leaders regard trade as 'win-win', that negotiations on an investment agreement will proceed, that they recognise the importance of a respectful relationship between the US and China to the global economy, and so forth.

Both leaders will wish to be able to say that they have established a framework for the relationship, especially in respect of trade and investment – a goal already foreshadowed by an official briefing on Wednesday. For the rest of the world, that will be welcomed as a fine outcome.

Reporters will be encouraged to write stories about the amazing but unexpected personal chemistry between the leaders, the depth and understanding of their relationship, their admiration for each other, and their calm determination to avoid the widely predicted clash of opposing interests. Both of them, it will be said, are deal-makers.

Trump is unlikely to dwell on human rights, a topic annoying to Xi and of no interest to Trump. They will not discuss Taiwan, other than to perhaps reaffirm US recognition that it is part of China. If they were going to seriously discuss US objections to China's claims and its island construction program in the South China Sea, I doubt the meeting would be taking place at all. It is too risky a topic, and one on which neither leader will wish to publicly concede ground – whatever the messages being exchanged between officials.

There are difficult issues in trade relationship between the two economies, but they are mostly too abstruse to come up to the leaders' level at all, let alone be resolved by them. Whether China will retain developing country status in the WTO (which it wants) while also achieving market economy status in trade remedy cases (which it also wants, and the US refuses) are much too hard, too detailed and are in any case so surrounded with trade-offs they will have to be negotiated at the level of officials.

Trump will not repeat his threat to impose 45% tariffs on Chinese imports. Nor will he threaten to declare China a currency manipulator, though there may be words about the importance of fair exchange rates. Trump cannot evade saying something about the trade deficit between America and China, one of his big crowd-pleasers during the campaign. But the talk is likely to be of a new direction in China-America trade in which China will buy more American goods and curb what the Trump Administration may regard as dumping. For Xi, this would be a trivial price for the much bigger gain of an orderly relationship with the United States. 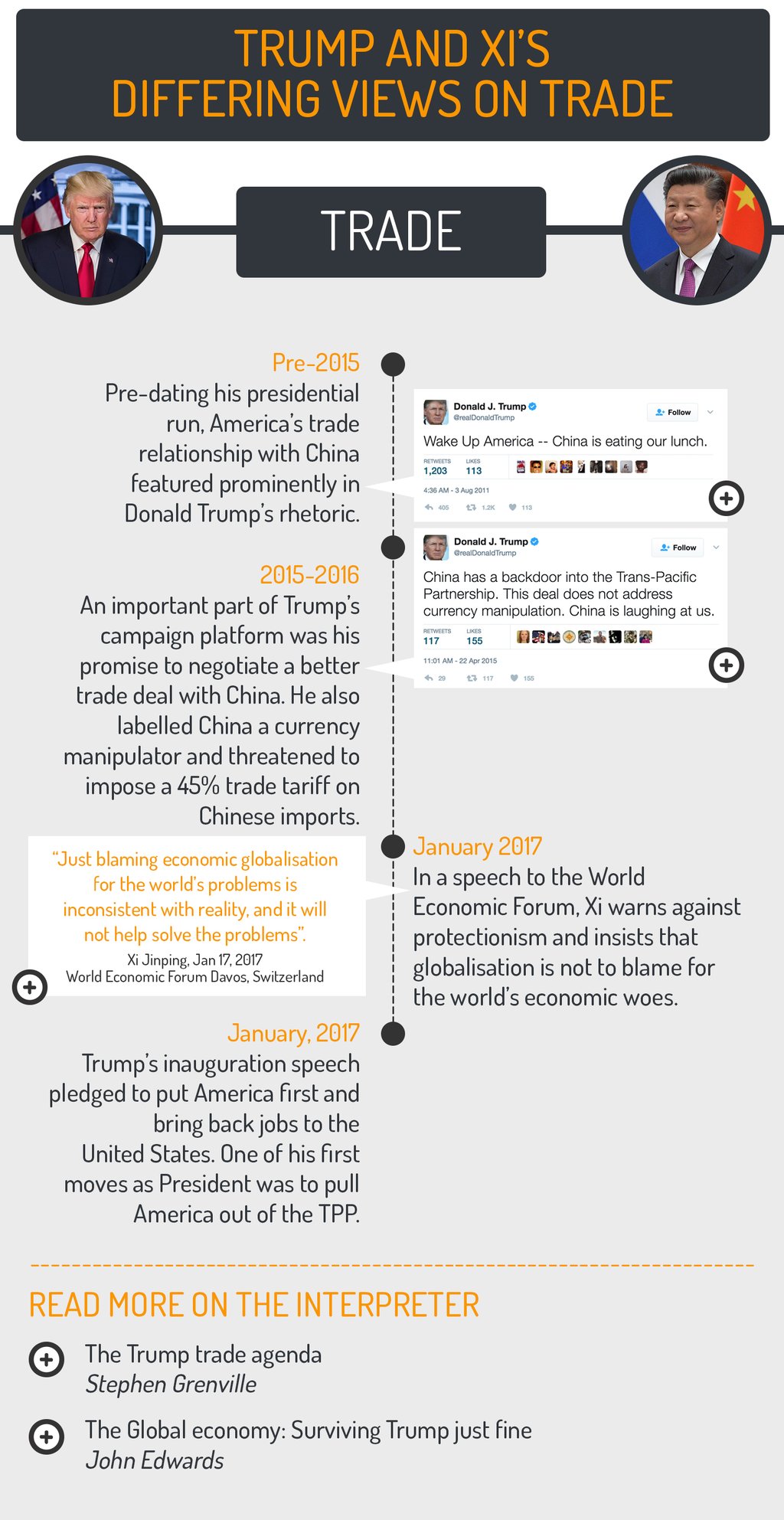 Show Comments
Previous Article
How would a President Moon Jae-in approach North Korea and China?
Next Article
The Trump-Xi meeting: A view from China