The selection of Mischief Reef raises the question as to what particular freedom of navigation the US was seeking to exercise.

According to this Reuters report, which was soon followed by others citing a Pentagon spokesman, a US Navy warship, the destroyer USS Dewey, has recently sailed within 12 nautical miles of the Chinese-occupied Mischief Reef in the South China Sea. This was the first such challenge to Beijing by the US under President Donald Trump, but neither the location or the operation itself should have come as a surprise. It may also score some marks for the US in the Philippines without unduly upsetting China or the rest of the region.

The US Navy has for some time been itching to conduct a Freedom of Navigation Operation (FONOP). Back in March, US Pacific Command requested permission for a Navy warship to sail within 12 nautical miles of Scarborough Shoal, a disputed reef in the South China Sea claimed by both China and the Philippines. The Pentagon turned down this request, as it had two similar requests made in February.

Admiral Scott Swift, Commander of the US Pacific Fleet, said in Singapore earlier this month, that the recent hiatus in FONOPs in the South China Sea didn’t mean that the US Navy was reluctant to confront China and exercise its freedoms of navigation in the area. He said there had been no change in policy under President Trump and spoke of the advantages of doing FONOPS in view of the uncertainty about the future role of the US in Asia since the November presidential election.

The decision not to challenge China earlier is believed to have been a move to not ‘rock the boat’ while Washington sought help from Beijing to resolve the escalating crisis on the Korean Peninsula. Or, as an unnamed official from the US Defense Department said, Defense Secretary​ Mattis was putting FONOPS on hold as part of a broader review of 'the American security posture around the world'.

As the situation on the Korean Peninsula calmed somewhat, a FONOP in the South China Sea became more likely. The American FONOP program to challenge what the US views as ‘excessive claims’ under the international law of the sea has a long history (as the Lowy Institute's new interactive map shows), and in recent years, China has been a major target of the program. To stop doing FONOPs in the South China Sea would have been seen as a major victory for China, and would have strengthened doubts in Southeast Asia about Washington’s commitment to the region.

Mischief Reef was the obvious choice for a FONOP given it, and its Second Thomas Shoal feature nearby, were found by the Tribunal in The Hague dealing with the arbitration instituted by the Philippines against China to be low-tide elevations with no entitlement to a territorial sea, exclusive economic zone (EEZ), or continental shelf. The Tribunal also concluded that both features form part of the EEZ and continental shelf of the Philippines.

The Tribunal found as a matter of fact that China had protected and failed to prevent Chinese fishermen from fishing within the Philippines’ EEZ at Mischief Reef and Second Thomas Shoal, and had constructed installations and artificial islands at Mischief Reef without authorisation from the Philippines. The Tribunal therefore concluded that China had violated the Philippines’ sovereign rights with respect to its EEZ and continental shelf. As an artificial  island built up from a reef covered at high water, Mischief Reef is only entitled under the UN Convention on the Law of the Sea (UNCLOS) to a 500m safety zone around it.

Mischief Reef and Second Thomas Shoal rate highly in the national psyche of the Philippines. They are well within the EEZ of the Philippines, and China’s activities on and around them have been a vexed issue between the two countries for many years. In the late 1990s, China built structures to protect fishermen on Mischief Reef, sparking furious protests from the Philippines. The Philippines subsequently ran an old landing ship aground on Second Thomas Shoal, using it as living quarters for a group of marines tasked with protecting Philippine sovereignty over the feature. However, in recent years, Chinese ships have regularly disrupted Philippine attempts to resupply or rotate these marines.

The selection of Mischief Reef for the recent FONOP raises the question as to what particular freedom of navigation the US was seeking to exercise. If it was the right of a warship to innocent passage in a territorial sea, then it could be construed as an acceptance of Chinese sovereignty over the feature. But if it was to demonstrate a high seas freedom of navigation past a feature not entitled to a territorial sea, then the operation might have been conducted more aggressively with, for example, the firing of weapons and the launching of the ship’s helicopter (all activities prohibited during innocent passage but acceptable high seas freedoms). This point should be clarified, but the US is unlikely to do so. It is sufficient, in Washington’s view, for the US to conduct a FONOP without risking criticisms of acting provocatively or being more assertive. Washington probably appreciates the point that more provocative actions in the South China Sea may not win friends in the region.

With Philippine President Rodrigo Duterte recently criticising US actions and inactions in the South China Sea, a FONOP past Mischief Reef, and perhaps Second Thomas Shoal as well, was likely to be well received in the Philippines. It might also send a relatively harmless message to other Southeast Asia countries about American commitment to the region.

What will China do? Apart from making the standard protests, Beijing is unlikely to view the latest FONOP too seriously. Beijing would have expected US FONOPs in the South China Sea to continue and, provided they don’t escalate too much in terms of frequency or aggressiveness, Beijing will not be too fussed. FONOPS are the game Washington is expected to play. 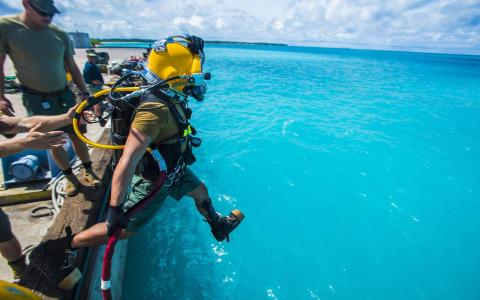 Previous Article
G7: A European summit with a global agenda
Next Article
'Dizzy with Success': What Putin thinks of the Trump ascendancy

The status quo in the Strait has changed. But is anyone really tuning in as the drama unfolds?
Daniel Woker 10 Jan 2017 17:18

The Roma are an ethnic minority that migrated during the Middle Ages from India into Europe.
Greg Earl 29 Jun 2017 15:07

While freer trade appears to have more global support in polls than political debate might suggest, the same can’t be said for foreign investment.