Weakness in government coordination and communication will constrain flexibility to deal with this complex challenge. 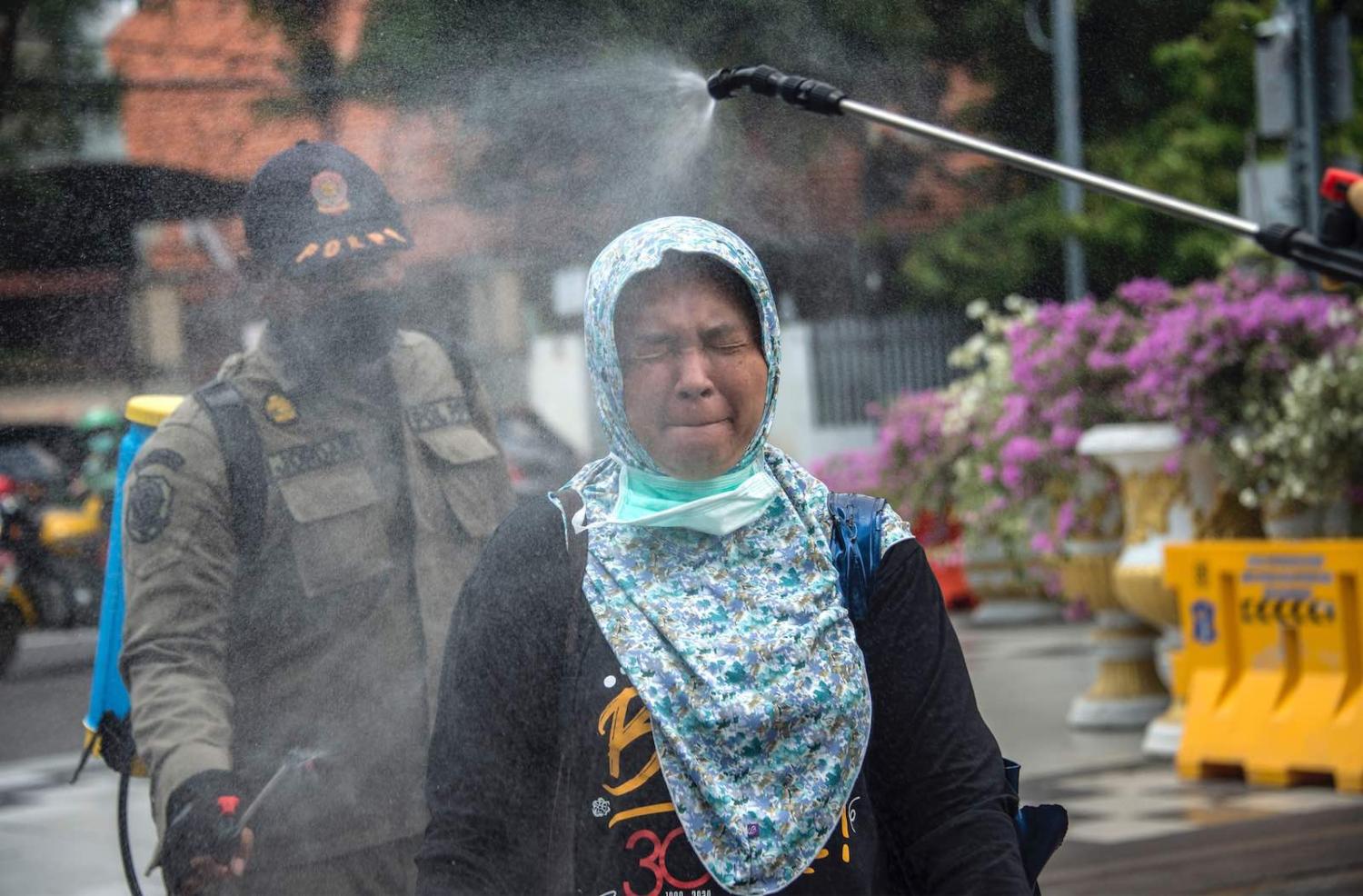 A woman is sprayed with disinfectant on Monday before entering a local government office as a precautionary move against the spread of the Covid-19 coronavirus in Surabaya, Indonesia (Juni Kriswanto/AFP/Getty Images)
Published 24 Mar 2020     Follow @greta_nabbs

To date Indonesia has 514 confirmed cases of COVID-19 and growing. This may not sound particularly alarming, given Australia had 1396 according to the most recent figures, but this week Indonesia’s death rate rose to 48, the highest in Southeast Asia. A massive public health disaster in Indonesia now seems inevitable.

While Australia grapples with growing numbers of sick people, job losses, and more stringent social distancing measures, it hardly seems the time to be worrying about other countries’ management of Covid-19. But as UN Secretary General Guterres has warned, “if the virus is left to spread in the most vulnerable regions of the world – it could kill millions. Global solidarity is not only a moral imperative, it is in everyone’s interests.”

The Indonesian government is facing a pandemic that will impact on a country with 267 million people, 11 times that of Australia’s population, and could face upwards of 500,000 deaths. The scale of this pandemic threat is due not only to the size of Indonesia’s population, but also specific socio-economic and governance factors. Although Indonesia, rightly described as a “linchpin of the Indo-Pacific”, is a middle income country with impressive GDP growth rates, life for many Indonesians remains precarious.

The World Bank estimates that about 20% of Indonesians are vulnerable to falling into poverty in the face of economic shock and disjuncture. A number of policy measures have seen Indonesia’s public health system improve over time, but according to a World Health Organization review “the ratios of hospital beds, puskesmas [community health clinics], and physicians to population remain below WHO standards and lag behind other Asia-Pacific countries”. Indonesia also has more than 61 million tobacco users, including those exposed to second-hand smoke. Cardiovascular disease, much of it attributed to smoking, is the number one cause of death in Indonesia.

The Indonesian government has been criticised from both at home and abroad for not responding quickly enough to the emergence of the pandemic. Throughout February and early March, Indonesia claimed it had zero cases of Covid-19, when neighbouring countries Singapore and Malaysia saw rapid growth in the spread of the virus, and tourists returning from Indonesia tested positive.

Now Jokowi has turned to security actors such as the National Intelligence Agency (BIN) the Police and Armed Forces to manage what is predominantly a health crisis. This reflects a pattern of increasing presidential reliance on the security forces following destabilising election contests, but also attests to the President’s lack of confidence in the crisis management capabilities of civil agencies.

Indeed, the weakness in government coordination and communication outside the security sector is borne out by the anecdotal evidence of dozens of Indonesian public servants engaged in capacity building and skills development short courses in Australia. These public sector officials, overwhelmingly serious about developing policy solutions for governance and service delivery challenges across the world’s largest archipelagic state, routinely identify one issue above all others as the key problem in Indonesia’s bureaucracy – lack of whole-of-government coordination.

The coronavirus represents a massive disruptor for the global community and a profound test of leadership for governments across the world. Certainly, it will demand ongoing review of Australia’s budget position and an eventual recalibration of international development priorities.

Indonesian policymakers routinely attribute weak whole-of-government coordination to “ego sektoral”, a term which needs no translation, and which also exists in Australian Commonwealth and State government circles, albeit to a lesser degree. This weakness can be attributed in part to the need to further consolidate public sector reforms, but also to socio-cultural factors, including strong deference to hierarchy.

Traditional, hierarchical bureaucratic cultures are changing in Indonesia backed by a series of laws and regulations focussed on enhanced public sector performance, oversight and accountability, but not quickly enough. The result is that initiative and innovation remains stifled and the flexibility of the bureaucracy to deal with complex challenges and crises constrained.

These senior level coordination mechanisms to support whole-of-government decision-making are familiar to many in Australian government in the form of interdepartmental committees (IDCs). However, the equivalent mechanisms often do not exist in the Indonesian government, or where they are present, are often nascent or suboptimal in performance. In addition, coordination within agencies themselves (intra-agency coordination) as a vital foundation for effective whole-of-government coordination, remains a challenge, a fact which many Indonesian officials working on the 2018 Lombok earthquake and Palu tsunami and liquefaction disasters were made painfully aware.

Improvements in Indonesia’s public sector performance and policy-making processes can be attributed in part to sustained Australian aid investment in Indonesia. Indonesian policy-makers have benefited from the expertise of Australian university experts and consultants, backed by the strong buy-in of Australian governments at state and federal levels. A number of programs, including the Australia Awards in Indonesia short courses, have been specifically designed to enhance the Indonesian public sector’s ability to manage complex public policy challenges.

Perhaps recognition of the value of these initiatives was the reason for unprecedented submissions by Indonesia’s Vice President Ma’ruf Amin and Minister for National Development Planning (Bappenas) Suharso Monoarfa to the review of Australia’s new international development policy.

According to The Australian, Monoarfa wrote that Indonesia had a “deep appreciation” for Australia’s aid support and that “the partnership supports important policy reforms that strengthen Indonesia’s stability and prosperity within the Indo-Pacific region and brings the relationship of our two countries closer.” He added Australia’s support gave Indonesia “the certainty we need to plan and budget for scale-up and replication of successful approaches”.

The coronavirus represents a massive disruptor for the global community and a profound test of leadership for governments across the world. Certainly, it will demand ongoing review of Australia’s budget position and an eventual recalibration of international development priorities.

In the months following the peak of the virus, Australia should not forget the importance of assisting Indonesia both in combatting infectious disease and in targeting capacity building initiatives to build effective crisis management. Australia’s capacity building programs in Indonesia funded by the Department of Foreign Affairs and Trade should give greater consideration to increasing military participation. This would cement closer links between civilian policy-makers and their security sector counterparts, the latter who possess more effective command, control and coordination experience.

Prioritising whole-of-government coordination in bilateral aid programs in Indonesia will become increasingly important as policy-makers contend with the array of complex challenges facing them posed by pandemics, climate change and social fragmentation. Although some Australians may question government priorities in helping Indonesia to recover from and minimise future pandemics during this difficult time, history has taught us that crises in Indonesia have an unfortunate tendency of reverberating dramatically on neighbours.

Previous Article
Philippines: Covid-19 will devastate the poor
Next Article
Disinformation and coronavirus