Rushing in with troops in emergency response could make matters worse at home and muddle efforts to engage the region. 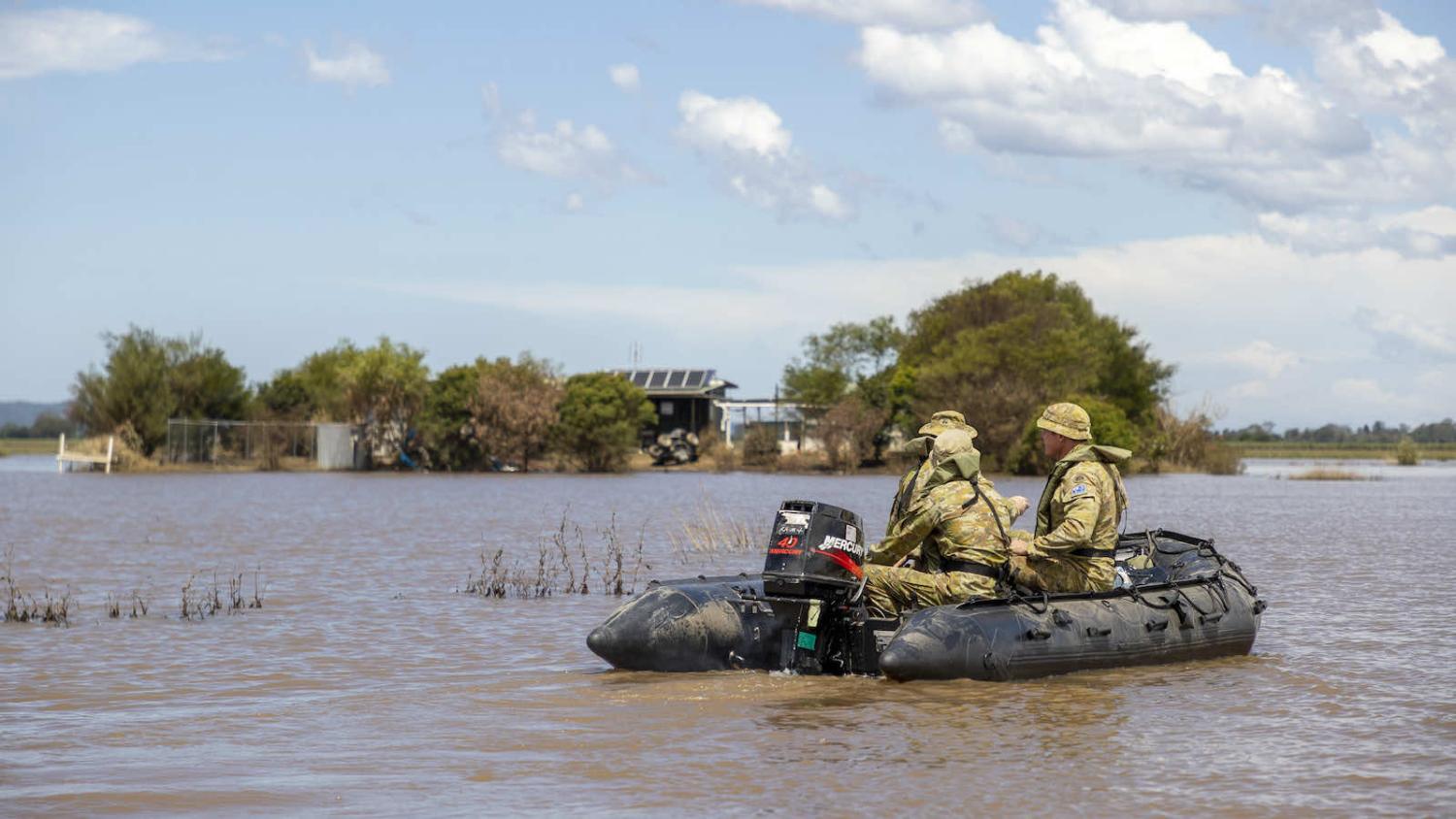 Before we “bring in” the troops for disaster assistance for good, key questions about the capabilities and limitations of ADF engagement need to be addressed (Defence Department)
Published 17 Mar 2022

The declaration of a national emergency in response to unprecedented flooding in eastern Australia, and the deployment of 7,000 Australian Defence Force troops across the states of New South Wales and Queensland, has reignited debate in the community about how Australia should best respond to more frequent and severe disaster-events that are driven, in part, by climate-change.

So far, the answer has demanded more people power – particularly defence personnel – faster. Agriculture Minister David Littleproud suggests the “simple solution” is that states “bring them in sooner”. There are also calls for a permanent, specialised military emergency response force to deliver disaster relief in the future.

Debate about how national security strategy should adapt to meet climate change implications is not unique to Australia. But before we “bring in” the troops for good, key questions about the capabilities and limitations of ADF engagement need to be addressed, and the environmental and political sustainability of future Defence disaster relief operations must be accounted for.

In high-risk weather seasons, the ADF puts an “emergency support force” of personnel in each state and territory on standby for deployment. Disaster relief and recovery is not a primary ADF function, but the military does have unique availability and capability that can be used for emergency and non-emergency assistance.

Recent events such as bushfires and floods have generated calls for a permanent ADF role in disaster relief, such as via a dedicated disaster relief unit. The rationale is that a dedicated unit would enable the Defence department to address the twin demands of more regular domestic and regional disaster relief and recovery, while the remaining personnel would focus on the primary warfighting mission.

One limitation to future, faster defence involvement is that the parameters for engagement are not well-established meaning rushing in could make matters worse.

If a specialised Defence unit is created, then the process and conditions for approving ADF engagement need to be clarified. The government has been variously criticised for failing to use its new powers to unilaterally deploy the ADF to support flood relief and recovery, and defended for waiting for state government consent. Meanwhile, NSW has been simultaneously blamed for refusing Defence assistance, and vocal about the slow federal government response to its formal requests.

The Australian debate rarely considers the environmental impacts of disaster relief and recovery operations, yet such activities may contribute to climate-related disasters.

Government and agencies also need to agree on what can be expected of ADF personnel, as well as a mechanism for civilian and military coordination. Reaching agreement may be difficult, because there is strong opposition to making an ADF presence the “new normal”. Some argue that regular engagement in domestic assistance missions will undermine the ADF’s preparedness for security crises, such as war.

There’s also the matter of Defence capacities. Defence does not have specialised assets and skills for emergency response, meaning that ad-hoc support can be harmful, even with best intentions. And despite readiness to assist its neighbours recover from disasters such as tropical cyclones, Australia is also criticised in the Pacific for failing to adopt stronger climate change policies after the Boe Declaration. The silver bullet of Defence disaster relief at home is looking more brass, as Australia will increasingly need to balance domestic engagement with its promises abroad.

Can the ADF respond to two disasters simultaneously, for example?

Despite ongoing debate, the 2020 Defence Strategic Update outlined expectations that the ADF would contribute more to domestic disaster relief, more often. Defence may need to restructure to become a “dual force” capable of responding to both traditional security threats and climate-related disasters.

The restructuring of the ADF may involve opportunities to procure greener resources that would reduce reliance on fossil fuels and mitigate further contribution to climate change during future disaster relief operations. For example, the US Army recently released its first-ever climate strategy, which includes plans to significantly reduce greenhouse gas emissions such as by electrifying its non-combat fleet. The United Kingdom has also taken some steps toward climate adaption, including by exploring the use of synthetic fuel for flights. Such alternatives have added benefits for the ADF in the context of ongoing concerns about oil fuel reserves, national oil refineries and supply chains.

The Australian debate rarely considers the environmental impacts of disaster relief and recovery operations, yet such activities may contribute to climate-related disasters that civilian and military responders are addressing. Consider, for example, the carbon emissions associated with logistics. While calculations vary, the IFRC found that flying 120 metric tonnes of relief goods over 2,000 kilometres (roughly the distance from Townsville to Sydney) releases the same amount of carbon dioxide emissions that 50 hectares of tropical forest capture each year.

To successfully resolve Australia’s Defence disaster relief debate, the final agreements must address the underlying causes of disasters. Climate-change is increasing environmental stresses, and the frequency, severity and unpredictability of hazards such as tropical cyclones. To prevent future hazard events from becoming disasters, the government should enhance funding, institutions and policies for disaster risk reduction, resilience, preparedness and climate change adaption, relative to its relief and recovery efforts.

And, for Defence military disaster relief to be sustainable, “the only effective forward defence” is a stronger Australian commitment to reduce greenhouse gases.

Previous Article
We need to stop talking about the grey zone
Next Article
Australian defence: what the 1930s foretells for the present

Another platform for meaningless democracy rhetoric would be a step backwards.
Stephen Blank 5 Nov 2019 12:00

Moscow and Beijing are closer than ever, increasing threats to Australia’s vital and long-standing interests.
Natasha Jha Bhaskar 4 Apr 2019 10:30