Dengue spirals out of control in the Philippines

After a controversial vaccine ban, the government struggles to contain the epidemic. 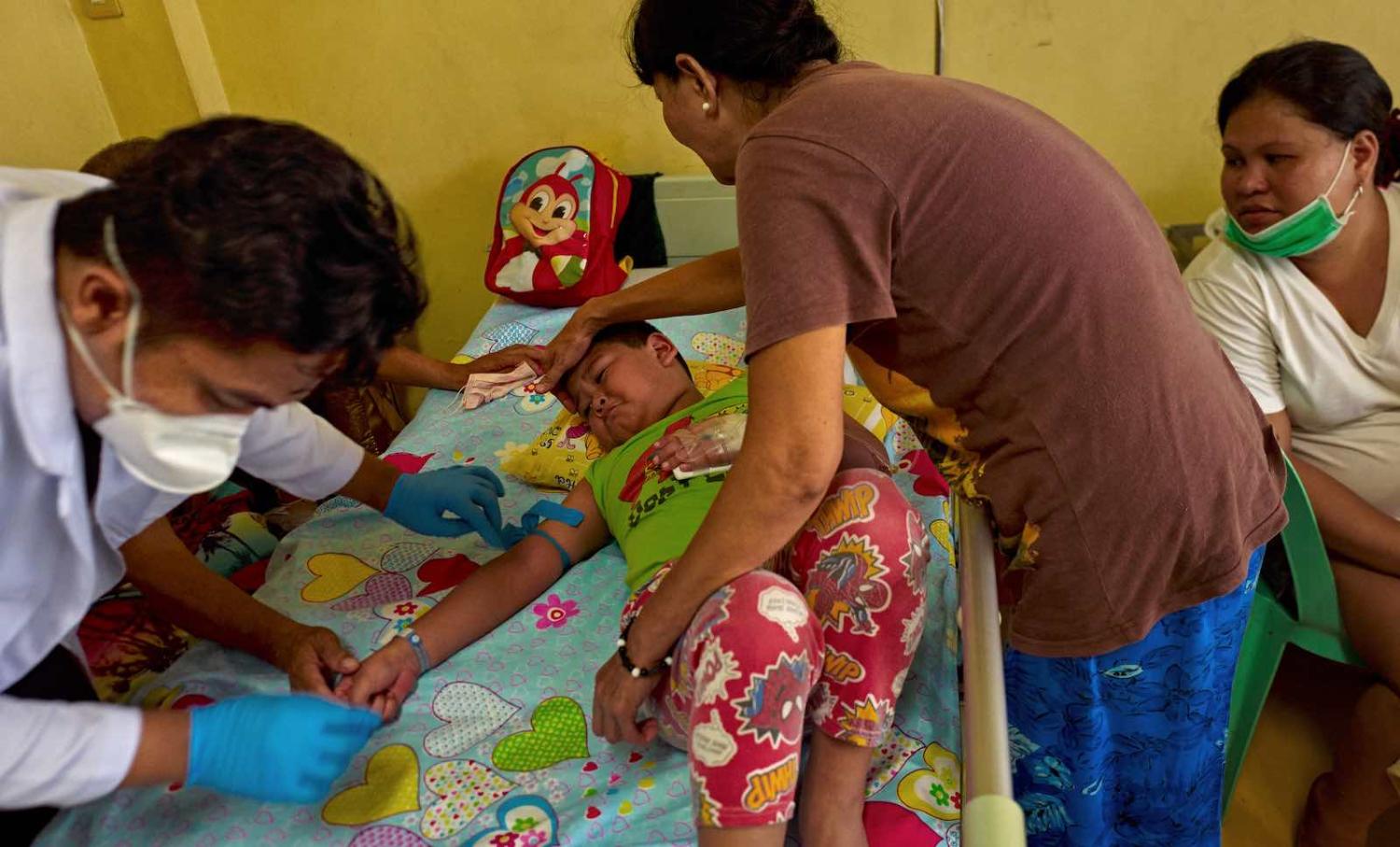 A 6-year-old boy is comforted by his mother as a nurse extracts blood for testing at the San Lazaro Hospital, Manila, 14 August 2019 (Photo: Jes Aznar/Getty Images)
Published 26 Aug 2019

The recent declaration of a national dengue fever epidemic in the Philippines has sounded a public-health alarm in the Western Pacific, as cases of the tropical virus continue to rise throughout the region.

The statement by the Philippines Department of Health earlier this month follows a government ban in late 2017 of the world’s first dengue vaccine. The current outbreak has seen more 146,000 cases in the Philippines during the first half of this year – a 98% increase compared to the same period in 2018 – and more than 600 deaths.

While the declaration will enable access to sorely needed response funding, case numbers in the Philippines have consistently exceeded national epidemic thresholds since January.

This trend echoes a concerning rise in dengue incidence throughout the Western Pacific, with reported cases also above typical levels in Cambodia, China, Malaysia, and Vietnam. In South Asia, Bangladesh is facing its worst dengue outbreak on record, with at least 40 confirmed deaths and more than 44,000 people admitted to hospitals with the virus since January.

With dengue fever cases and fatalities now at record levels in the Philippines, regulatory and health ministry officials should consider reintroducing the vaccine with appropriate restrictions, in a similar manner to the US.

Global incidence of the mosquito-borne virus – which causes flu-like symptoms and can lead to potentially fatal complications in a small percentage of cases – has increased in recent decades, with significant rises throughout Southeast Asia, the Western Pacific, and Latin America. The advance has been attributed to several factors, including increased urbanisation, travel, and population growth, as well as climate instability, with increased rainfall in endemic regions enabling greater mosquito transmission.

A national vaccination campaign was launched in the Philippines in 2016, but the government made the decision in 2017 to ban the sale and distribution of Dengvaxia, after Sanofi Pasteur, the vaccine’s manufacturer, released new data indicating an increased risk of severe dengue in vaccinated individuals who had not previously been exposed to the virus. Dengvaxia is the world’s only internationally licensed dengue vaccine.

Amidst a growing political scandal, the Philippines health ministry estimated that about 90% of the 830,000 schoolchildren already vaccinated had previously been exposed to dengue – leaving more than 80,000 at risk of more severe disease. The World Health Organization has since advised that the vaccine should only be introduced if previously unexposed individuals can be avoided, recommending pre-vaccination screening for recipients.

The Philippines Food and Drug Administration, after an investigation, permanently revoked Sanofi’s product license for Dengvaxia earlier this year, citing the company’s failure to comply with post-marketing authorisation requirements.

Government prosecutors in the Philippines have since found probable cause to charge 20 government officials and Sanofi staff with reckless imprudence resulting in the deaths of 10 children as part of the vaccination campaign, alleging that officials rushed to approve the vaccine when it had not yet completed clinical trials, and that they failed to monitor the vaccination campaign or assist families when severe reactions occurred.

The deaths, however, have not been conclusively determined to have resulted from the vaccine, with medical experts highlighting the role of pre-existing diseases in the deaths of those who received the vaccine. And while the potential for severe dengue cases in a small subset of vaccine recipients is alarming, the unintended public consequences of the Dengvaxia controversy have arguably been far worse.

Nationwide panic and mistrust of vaccinations following the scandal resulted in a decline in both dengue and measles immunization rates in the Philippines, helping to trigger a measles outbreak that has seen a 600% increase in cases since last year. A UNICEF/WHO report emphasised the role of the Dengvaxia controversy in rising vaccine hesitancy, limiting the effectiveness of supplementary immunisation programs.

While Dengvaxia’s low efficacy and risk of severe complications in previously unexposed individuals has led to specific restrictions on its use, it remains 76% effective in previously infected individuals and is the most useful preventive measure available to combat the spread of dengue.

The vaccine is currently licensed for use in 19 countries and eligible parts of the European Union. The US Food and Drug Administration announced the approval of Dengvaxia with age- and location-specific restrictions earlier this year – including prohibiting the vaccine in individuals not known to have been previously infected with dengue – in a bid to combat endemic dengue in the US territories  of American Samoa, Guam, Puerto Rico, and the US Virgin Islands.

With dengue fever cases and fatalities now at record levels in the Philippines, regulatory and health ministry officials should consider reintroducing the vaccine with appropriate restrictions, in a similar manner to the US.

Health Secretary Francisco Duque has not ruled out such a move, as the government considers an appeal from Sanofi to reintroduce Dengvaxia in the Philippine market. Secretary Duque has, however, ruled out using the vaccine to combat the current outbreak – which has largely affected children aged 5 to 9 – as it has previously only been approved in individuals aged 9 to 45.

Without Dengvaxia, Secretary Duque has called on government agencies, schools, offices, and communities to destroy mosquito breeding sites in a bid to stop transmission of the virus.

With the virus continuing to spread throughout the region, the effectiveness of such a strategy remains questionable.

Locking off waters to protect biodiversity won’t work without recognising that fish don’t care for the lines on a map.
Sam Roggeveen 25 Nov 2019 06:00