A bid “to ensure good Danish knowledge” has raised fears of Islamophobia. 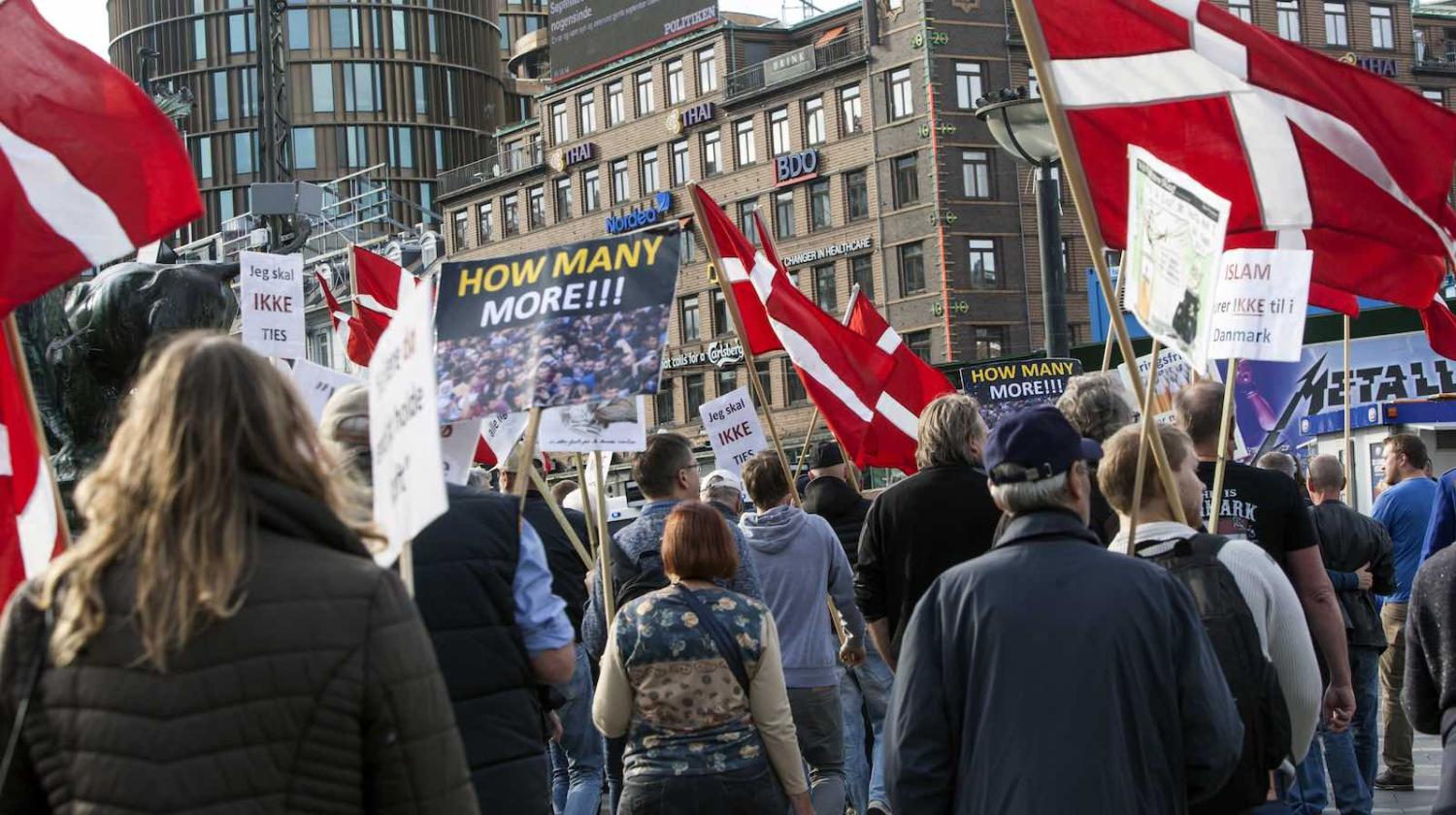 Protestors organised by For Freedom (Danish, read: For Frihed) demonstrate against Muslim through Copenhagen, Denmark, in 2016 (Photo: Ole Jensen via Getty)
Published 4 Jul 2018

In Denmark, if you have dark skin and weren’t born in that country, chances are you live in what is officially dubbed a “ghetto”.

Ghettoes in Denmark are characterised by the government as neighbourhoods with high levels of unemployment, more frequent occurrences of crime, and low levels of education, and that are made up of mainly non-Western immigrants.

Children in ghettoes will attend mandatory language classes, and parents who do not oblige will lose child benefits.

In his New Year’s Address this year, Denmark’s Prime Minister Lars Løkke Rasmussen announced a plan to fade out ghettoes completely. These neighbourhoods, he said, are “parallel societies” where “many people with the same problems are bunched together”. Such problems include economic reliance on the government or crime.

Rasmussen assured that not all immigrants are challenging Danish values, and that their population includes “competent foreign manpower” and “those who have fallen in love with a Dane”. But there are many “who abuse our hospitality. Challenge our way of living. Put tolerance at risk.”

A government plan to rid of ghettoes – One Denmark without parallels – No ghettoes in 2030 – was launched in March.

One of the strategies includes reducing the benefits given to migrants who choose to move into these neighbourhoods, including less economic and educational assistance. The plan will also see increased police presence on the streets in the more “vulnerable” neighbourhoods, and doubling the penalties for crimes such as vandalism and theft.

Children are a fundamental part of this plan. “There must be an early effort to ensure good Danish knowledge”, the strategy insists.

As part of enforcing this “Danish knowledge”, children in ghettoes will attend mandatory language classes, and parents who do not oblige will lose child benefits. They will also be taught values such as gender equality and co-responsibility from an early age and, as quoted in Euronews, will learn about “democracy, equality and major Danish holidays like Christmas”.

Denmark is the only country, according to Reuters, to label certain urban neighbourhoods formally as ghettoes. The neighbourhoods are mostly made up of cheap apartment buildings, and although public authorities have placed some refugees in these apartments who are on “integration support”, there are many immigrants who choose to live in ghettoes.

“Denmark is the most Islamophobic country in Europe”, said Bashy Quraishy, a Danish-Pakistani who has been working in anti-racism and discrimination both in Denmark and internationally.

Quraishy told me Danish culture is somewhat of a “tribe” when it comes to cultural identity. He said:

It is a very homogenous and Christian society and that is why some of the comments of the politicians are drastic and very upfront.

For example, prior to Ramadan, the Danish Minister for Integration and Housing, Inger Støjberg, made a comment that Muslims should take time off during Ramadan “to avoid negative consequences for the rest of Danish society”. She referred to bus drivers as an example of workers whose performance may be inhibited by fasting.

This comment has since been dismissed by both bus companies and doctors. Although low-level politicians criticised the minister’s statement, the Prime Minister and other politicians said nothing. And for Quraishy, this marks a difference between Denmark and other European countries.

The Minister’s comment and the plan to weed out ghettoes has come alongside the burqa ban. In May, the Parliament passed a law that prevents the population from wearing garments that cover the face. This includes Islamic vales, such as the burqa and the niqab.

Although the government has insisted that this does not target any particular religions, the legislation allows people to cover their face if it is for “recognisable purposes”, such as wearing motorcycle helmets. “Recognisable purposes” does not seem to include religious reasons.

In the New Year’s Address, Rasmussen announced that the number of asylum seekers in Denmark is the lowest it has been in years. He finished his speech with praise for his government’s immigration policy:

Myths that stir trouble in the South China Sea

A major shipping route, yes, but vital? False claims about the value of these waters only make diplomacy harder.
Edward Howell 19 Apr 2018 12:00

Why definitions will be crucial for North-South talks

By focusing on the elephant, Australia risks misunderstanding the room.