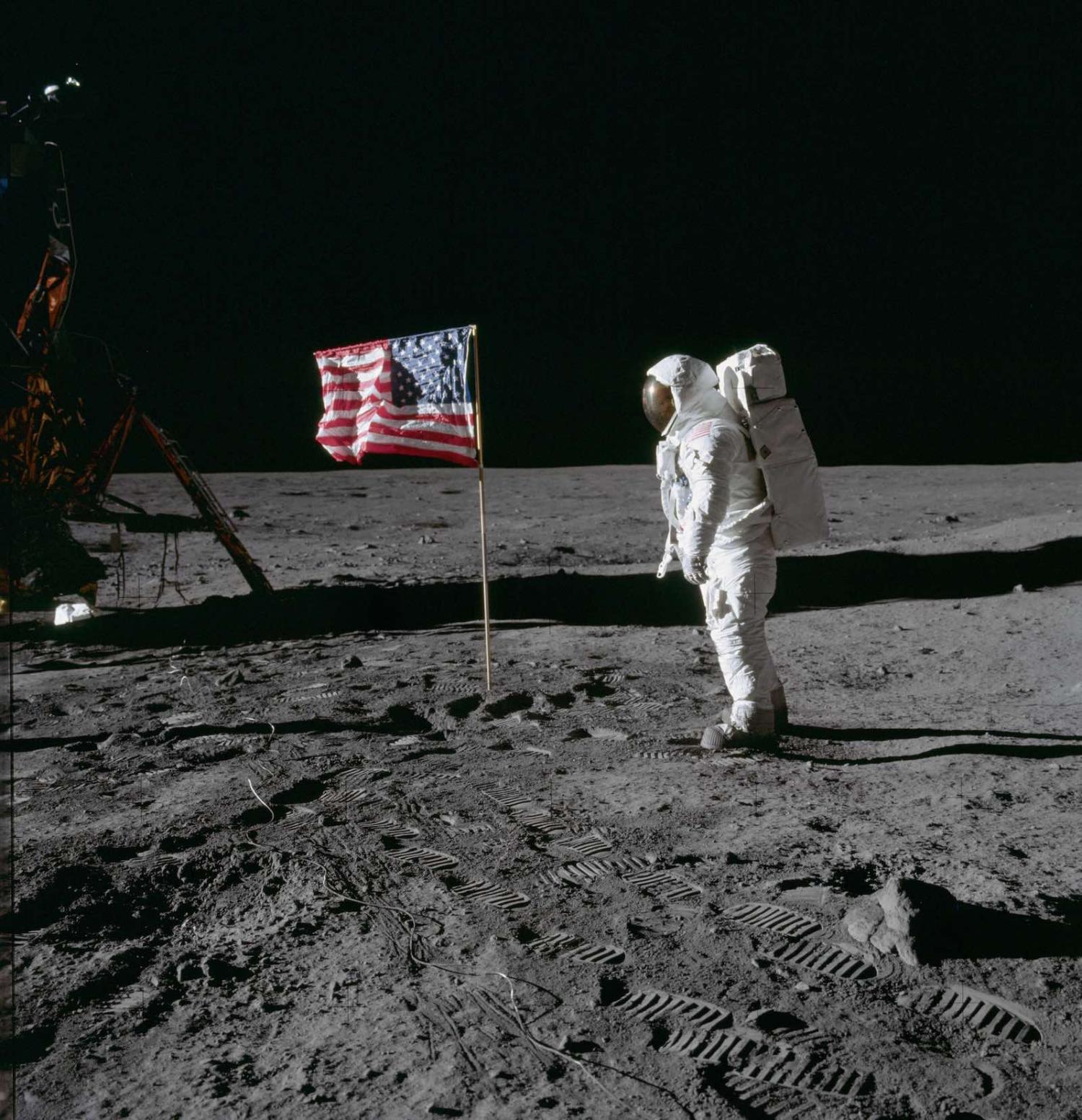 Astronaut Edwin "Buzz" Aldrin poses for photograph beside US flag on the surface of the Moon in 1969 (Photo: NASA Johnson/Flickr)
Published 25 Jul 2019

This past week has seen worldwide celebrations over the 50th anniversary of the 1969 Apollo 11 Moon landing. Many iconic images from that time have been revisited, including those showing the United States flag planted on the Moon’s surface.

Exploration throughout history, especially by colonial powers, is associated with the “planting of the flag”.

These celebrations have come at a time when the Trump administration has committed the US to sending a manned mission to the Moon by 2024. They also coincide with a global surge in interest in space exploration, with missions to Mars in the works, and commercial interests in space gathering momentum through entities such as SpaceX and Blue Origin.

The US is not the only country with an interest in the Moon. India launched a mission to the Moon this week. Meanwhile, China commenced its Chang’e lunar program in 2007 with a focus on the so-called “South Pole” where it landed a probe in January this year. On current projections, China is hoping to have a manned mission to the Moon by the 2030s, raising the prospect of whether strategic competition between the US and China may be expanding from Earth to include space and in particular the Moon.

What then would be the significance of a US or Chinese flag being planted on the surface of the Moon in the future?

Exploration throughout history, especially by colonial powers, is associated with the “planting of the flag”. By this act, explorers, often acting under the orders or sponsorship of a monarch or government, would plant the flag and declare sovereignty, title or ownership over newly discovered lands. These acts, which are also associated with the early European explorers to first reach Australia, often formed the basis for a territorial claim of sovereignty over islands, lands, or even continents.

Assertions of title over territory based on acts of discovery remain the subject of dispute to this day and the International Court of Justice is often called upon to rule in these cases.

How significant then was the planting of the US flag on the Moon in 1969? Two years earlier in 1967 the US had signed and ratified the newly drafted Outer Space Treaty. The treaty has a total of 109 parties, including Australia, China, the Russian Federation and the US. Article 2 of that treaty states that:

Outer Space, including the Moon and other celestial bodies is not subject to claims of national appropriation by claim of sovereignty, by means of use or occupation, or by any other means.

Against this legal backdrop, the US flag planting could not signify its intention to claim sovereignty over the Moon. This was made clear by a law passed by US Congress in November 1969, affirming the flag planting was a “a symbolic gesture of national pride in achievement” and not a claim to sovereignty. Nonetheless, the symbolic strength of having the US flag on the Moon was clear. Earlier proposals included planting the United Nations flag either instead of, or alongside, the US flag. These were rejected by both NASA and the US public.

The Moon received further international legal attention in 1979 with the drafting and adoption of the Moon Treaty. This treaty not only disallows sovereign claims over the Moon, but also explicitly excludes any property rights – whether by Governments or private individuals – to any part of the surface, subsurface or natural resources of the Moon. No-one, according to the Moon Treaty, can own the Moon or any part of it. However, unlike the Outer Space Treaty, the Moon Treaty does not enjoy widespread support. It has only 18 parties, and neither the US nor China have signed up.

In the absence of a widely supported Moon Treaty, regulation of US-China competition over the Moon reverts to the Outer Space Treaty which prohibits either country from asserting any sovereign rights. The Outer Space Treaty also requires that the Moon be used for peaceful purposes, and forbids any lunar military bases or military activities. China and the US would also be compelled to offer assistance to each other’s astronauts, and bear international responsibility for their national activities on the Moon and in outer space.

What is less certain is whether either country could authorise its private citizens to mine resources from the Moon: something that the US has arguably done with respect to asteroids under laws passed in 2015. Such approaches sit uneasily with the concept that space – and the bodies and resources within it – are part of the common heritage of humanity. This concept is one shared with the law of the sea, and sets out that certain resources and areas should only be used for the benefit of all humanity and not for private or national gain. This concept is also expressly applied in the Moon Treaty.

Although the concept certainly underpins much of the Outer Space Treaty, it is not expressly set out in it and this ambiguity may be used to argue private utilisation of the Moon is still possible under existing international law. All the indicators are that there will be increased strategic competition over space, particularly between the US and China with the Moon looming as a potential flashpoint. In an era where there is renewed interest in the Moon strict adherence to the Outer Space Treaty, including the Article 2 limitation on Moon claims and those provisions requiring equality, free access and international cooperation will help diminish such tensions.

Previous Article
Boris wins his moment in the sun and may yet surprise us
Next Article
Congo’s Ebola outbreak: sounding a global alarm

little consideration was given to what US position would be in relation to the SDF when the Syrian government tries to reassert sovereignty in areas cleared of IS.
Michael Kabuni 9 Dec 2021 06:00

By focusing on service delivery closer to home, MPs are neglecting their mandated role as national lawmakers.