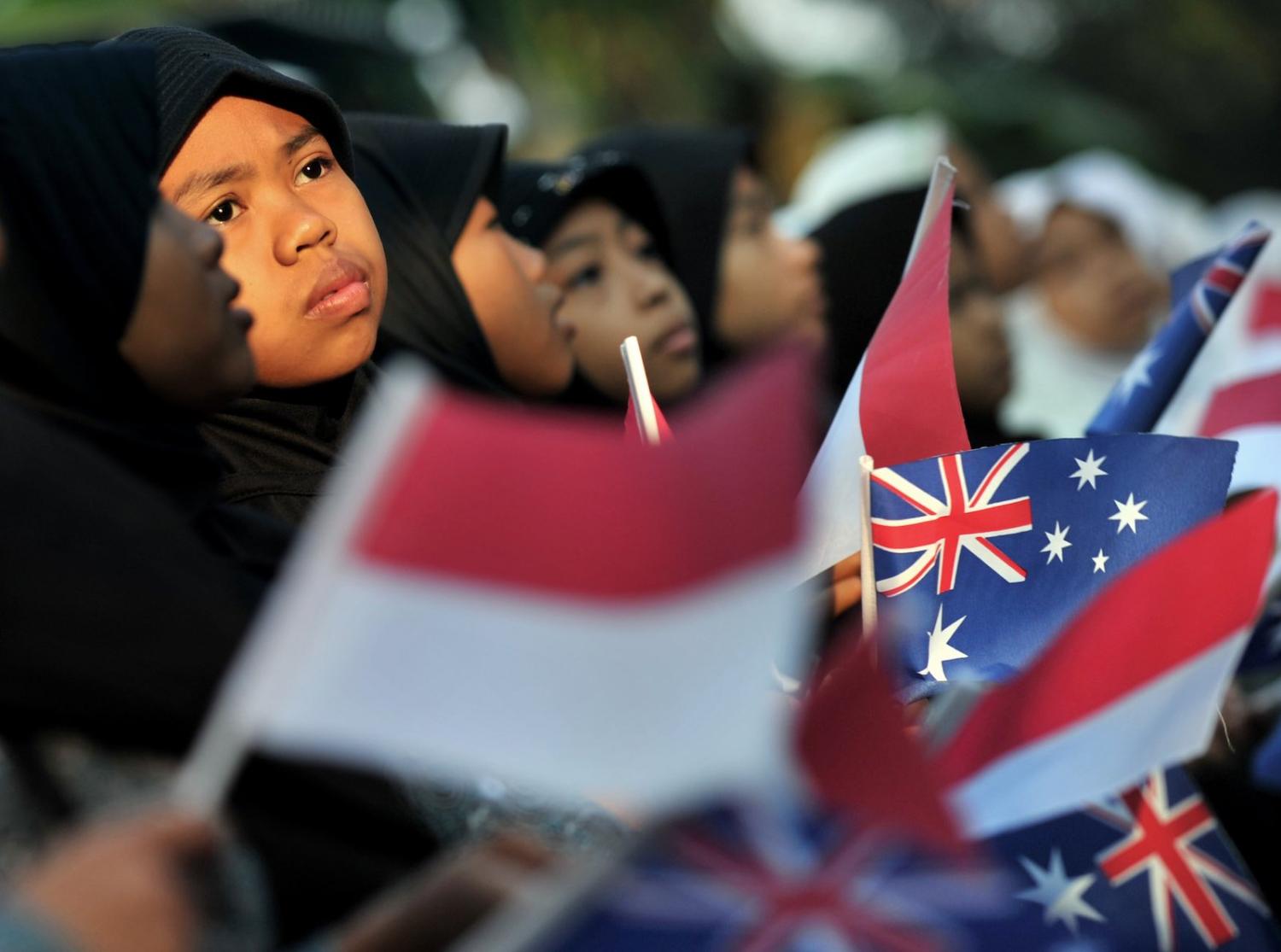 Indonesian language study has been in steady decline in Australia for many years (Photo: Bay Ismoyo via Getty)
Published 18 Apr 2019     Follow @MelissaACrouch

The Australia Indonesia free trade agreement presents an opportunity to strengthen relations between the two countries, but is Australia ready?

Talks about a free trade agreement with Indonesia have been long standing, and the Indonesia-Australia Comprehensive Economic Partnership Agreement was finally signed in March. This will open up new opportunities in terms of business, trade and education between Australia and Indonesia. More broadly, it is another step that could help strengthen Australia-Indonesia relations.

To make the most of these opportunities requires strong cultural understanding and solid language skills. This is sorely lacking in Australia. In fact, despite repeated warnings, the study of Indonesian language has been in steady decline for many years.

We pride ourselves in Australia on being the lucky country. One of the great opportunities we have is to high quality education. Yet over the past decade or so a number of Australian universities have in fact closed their Indonesian language programs. This is devastating and detrimental to efforts to strengthen Australia-Indonesia ties.

In the process of learning a language, you learn as much about yourself and your own language as you do about the language you are learning.

It is time to put Indonesian back on the priority list of languages to be studied. This should be a key priority of the next Australian government.

The benefits of multilingualism are profound and go far beyond mere economic arguments. We need to see our knowledge about Indonesia as critical to the quality and level of our engagement with the country.

Collaboration and partnership require mutual trust and understanding. Australia’s bilateral relationship with Indonesia could be strengthened by a significant investment in Indonesian language programs. We know that Australia still struggles to maintain a positive image and stable relations with Indonesia. Our collective lack of commitment to investing in language capabilities affects our relationships in the region.

Options for Australian students to study Indonesian in schools and universities are shrinking. Things have taken a particularly unlucky turn for the next generation in Australia, who are far less likely to have the opportunity to study an Asian language than in the past.

I was extremely lucky because as a student I had the opportunity to study Indonesian in high school. I also had the chance to visit Indonesia as part of my high school studies. This was a formative time and helped shape many of the future decisions I have made about my career.

I want the same opportunities I had for the next generation of students in Australia.

I was lucky enough to be accepted into the Australia-Indonesia Youth Exchange Program (AIYEP), a fantastic government sponsored initiative. This program enhances links between young people and is now in its 38th year. I studied at a university that offered advanced classes in Indonesian language. In contrast, some universities in recent years have closed their Indonesian language programs while others remain under threat.

I was also lucky enough to receive support as an undergraduate from my faculty to fund an internship with the Office of the Ombudsman in Yogyakarta as part of my degree. While later working as an Indonesian language primary school teacher, I also had the fortune to be funded by the Victorian state government to further my language studies in Indonesia.

And when undertaking post-graduate research, I was lucky enough to receive an Australian Government Endeavour Award to support my year-long PhD field research in Indonesia.

I am very aware that for the current generation of students, many of these opportunities are either shrinking or no longer exist.

I have since spent several years of my career outside of Australia. Coming back, it is disheartening to see the stagnation, and in some cases decline, in the study of Indonesian language. This seems ironic, given that we live in the Asian Century.

Of course, the problem starts with primary and high schools, many of which no longer teach Indonesian. New incentives are needed at this level so that students can start studying Indonesian early.

There is also the importance of creating the right incentives at university to encourage undergraduate students – particularly students in degrees like science and engineering – to take up a language.

The government’s New Colombo Plan is a fantastic initiative and has seen the expansion of valuable programs such as the Australian Consortium of In-Country Indonesian Studies. But short-term travel or study is absolutely no substitute for the long-term commitment required to learn a language.

In the process of learning a language, you learn as much about yourself and your own language as you do about the language you are learning.

Both countries – Indonesia and Australia – are soon to go to the polls. This means there is uncertainty ahead in relations between the Indonesian and Australian governments.

The free trade agreement requires the consent of the respective parliaments in Australia and in Indonesia. One step the next Australian government can take to strengthen Australia-Indonesia relations is to increase its commitment to the study of Indonesian.

Previous Article
US-Taliban negotiations: marginalising women is no path to peace
Next Article
Seeing what you want in Belt and Road

China and India have peacefully resolved similar incidents in the past. This time, however, the threat of war is being freely mentioned.
Johanna Nalau 30 Apr 2019 13:00

Adapting to climate change: the priority for Australia

Understanding the “new normal” to protect people’s livelihoods should be at the core of the next government’s agenda.
Alexander Harper 8 Feb 2018 12:30