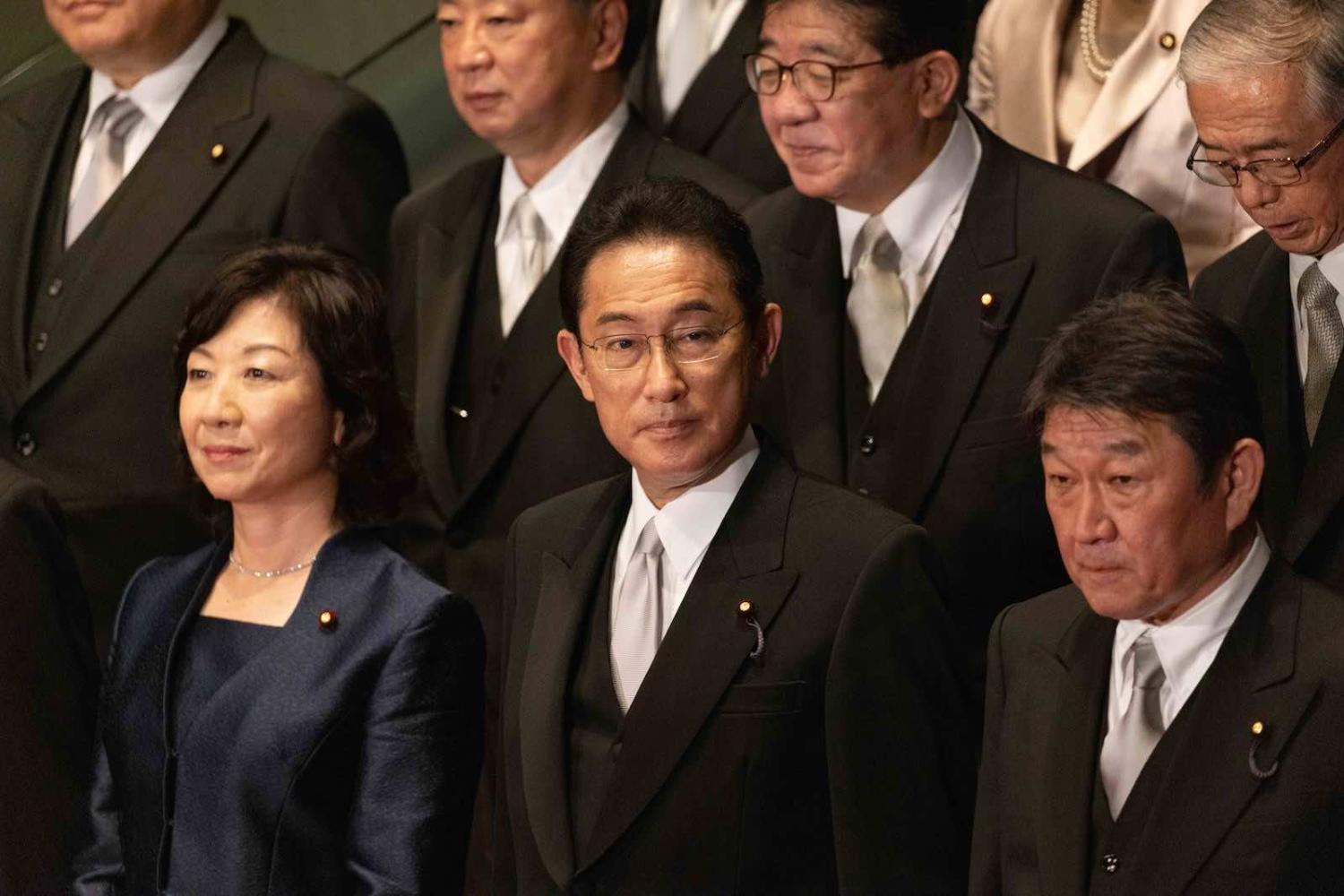 For a country renowned for churning through ministers, perhaps the most remarkable thing about Japan’s new ministry under freshly appointed leader Fumio Kishida is that it is getting a fresh finance minister for the first time in nine years.

The departure of 81-year-old veteran politician Taro Aso, a former prime minister as well as the country’s longest serving finance minister, is a testament to the unusual stability that the Shinzo Abe-era brought back to Japan’s leadership.

However, given that Aso appears to have replaced himself with his 68-year-old brother-in-law as the new minister while he ascends to deputy Liberal Democratic Party (LDP) chairman maybe there is not much change going on here.

So, in a new line-up that appears to be more about balancing factions than shaking things up, Prime Minister Kishida’s most interesting decision is the appointment of an economic security minister Takayuki Kobayashi.

While Kishida has been talking up an interventionist “new style of Japanese capitalism” at home ahead of the snap 31 October election, Kobayashi will be pursuing the same thing abroad where national security is increasingly gazumping globalisation. The second youngest minister at 46 in a newly created job, Kobayashi seems to have been given an unusual amount of responsibility. LDP powerbroker Akira Amari said that Kobayashi “should be able to give instructions to all ministries and agencies”.

Kobayashi is a Harvard graduate and former finance ministry official in Washington, but more importantly was part of an LDP committee pushing the previous government to legislate a new economic security strategy.

This will make him a key figure in giving some substance to the much promised supply chain cooperation between Australia, Japan and India and the broader focus in the “Quad” group with the US on issues such as critical minerals and cybersecurity.

Japan was at the frontline of the supply chain rethinking last year with a subsidy program to bring some manufacturing companies home, mostly from China, and Kobayashi is now touting a law that identifies and fosters sensitive technologies, secures fundamental infrastructure, and strengthens supply chains.

Australia is already well down this path with its critical infrastructure centre and this year’s budget spending on trade diversification and supply chain resilience. However, the government has not clearly responded to the Productivity Commission’s reports warning against over-reacting to concerns about supply chain vulnerabilities.

Kobayashi will also become a significant new player in how Japan manages its complex relationship with China under a new prime minister who comes from a less nationalistic wing of the LDP than Abe but who has been noticeably hawkish on defence issues in his campaign for the new job.

So, his opening comments on living with Beijing are worth noting:

The relationship with China is extremely important. Japan and China indeed have various issues, but I think a stable bilateral relationship is the key to prosperity for not only Sino-Japan relations but also for the regional and global communities.

Out of a hole

Australia’s image as little more than a quarry and a beach when it comes to exports last got a real workout two years ago when the Harvard Kennedy School’s Centre for International Development released its latest Atlas of Economic Complexity.

There down in the bottom half was the world’s ninth richest country in GDP per capita terms ranked between Senegal and Pakistan thanks to its narrow export base, with the publication noting Australia had become even less complex in the past decade.

But now just in time for the new quest for export diversification to deal with China’s coercive sanctions some new research from the International Monetary Fund suggests that Australia may not be doing so badly.

The study of what drives export diversification questions the commonly used economic modelling approach behind measures like the Atlas of Economic Complexity to identify complex and sophisticated exports. These approaches have often been associated with the idea that interventionist industrial policies are the key to achieving greater export diversification.

Instead, the IMF approach looks behind the commodity dependent export baskets in countries such as Australia with a natural endowment of resources to see whether and how they are going at avoiding the so-called Dutch disease of simply coasting on that resource wealth. As a result, IMF economist Gonzalo Salinas suggests Australia along with New Zealand and Chile has managed to diversify its export base more than what would be expected given its resources endowment.

In a counterintuitive finding when iron ore, coal and natural gas dominate Australia’s top exports, it argues that these countries have strong diversification-conducive policies that surpass geographically determined expectations and can therefore provide “role models of diversification”.

Indeed, Australia’s deviation from what might be expected given its location far from end markets for sophisticated non-hydrocarbon and mineral (NHMs) products is even higher than for the well-known role models of diversification such as South Korea and Malaysia.

Referring to the sort of approach taken in the Harvard Atlas the study argues:

While the Economic Complexity Index (ECI) aims to be a proxy of the productive capabilities of an economic system, its sensitivity to commodity-related factors, completely unrelated to an economy’s productivity, severely distorts its accuracy.

The key argument is that Australia, New Zealand and Chile seem to have been able to overcome their relative lack of proximity to markets for sophisticated exports by improving what the study calls horizontal policies – education, governance, open trade and so on.

So, the centrality of proximity to market for export diversification only heightens the importance of otherwise enhancing connectedness via things like reducing trade barriers, strengthening transport infrastructure, investing in communication technology and fostering technological diffusion the further a country is from the key markets.

This is not going to fill the immediate hole in farm exports to China or go down well with the minerals industry which this week celebrated how mineral and energy commodities accounted for 69 per cent of export revenue in August underpinning a record trade surplus.

But with export diversification the new buzzword in government from Treasurer Josh Frydenberg’s China-plus-one strategy to the new Blueprint for Trade and Investment with Indonesia from the Department of Foreign Affairs and Trade the idea that good basic economic policy can diversify exports is worth repeating. Or as the IMF paper argues:

Diversification strategies centred on strengthening horizontal policies are not only less controversial (than industrial policy interventions) but … constitute the backbone of export diversification.

For all its promises of a new form of government, the Biden administration’s much promised China trade policy seems uncomfortably trapped between the old Trump administration and the threat of a new one.

After a considered review of China policy over several months, the speech by Trade Representative Katherine Tsai on Monday was billed as providing answers on how the Biden administration was going to square the Trump tariff deals it inherited with the engaged global diplomacy it is promising.

Cutting tariffs for some US importers or trying to move on to more complex trade issues could be portrayed by Trump Republicans as abandoning American workers.

But while she revealed the US would start new talks with China, it mainly seems intent on simply pressing China to implement the commitments in made in phase one of the agreement to buy US$200 billion in extra US goods and services last year and this year. So far it has only done about 60 per cent of that.

But there was little sign of moving on to more important longer issues in the second phase of the deal in areas like regulation, intellectual property and state-owned enterprises.

Dropping the deal, cutting tariffs for some US importers or trying to move on to more complex trade issues could be portrayed by Trump Republicans as abandoning American workers ahead of next year’s elections. So, the caution is not surprising especially since it has now emerged Joe Biden and Xi Jinping plan to hold a virtual summit before the end of the year.

But China is continuing to push its case for entry to the Comprehensive and Progressive Agreement for Trans-Pacific Partnership – which would involve the sort of commitments implicit in the second phase of the Trump agreement ­– despite getting a generally sceptical response, including from Japan’s new prime minister.

But with the Biden administration showing no interest in returning to the old Trans-Pacific Partnership or even defending the World Trade Organisation in Monday’s speech despite renewed encouragement from Australia and others on these points, China is getting an easy run.

Previous Article
Maseratis in PNG: stuck in reverse
Next Article
China and the future of the Antarctic mining ban

The online environment is fundamentally toxic and piecemeal solutions will continue to fail to protect the vulnerable.
Peter Layton 12 Oct 2018 15:00

The army is preparing for new challenges on the battlefield. It should align it's strategy with that of the White Paper.
The Interpreter 11 Sep 2020 11:00

Publishing will be light today, we’re having a system upgrade.