Not somebody with humble beginnings, the rapid rise of Prabowo Subianto’s running mate also shows his future ambition. 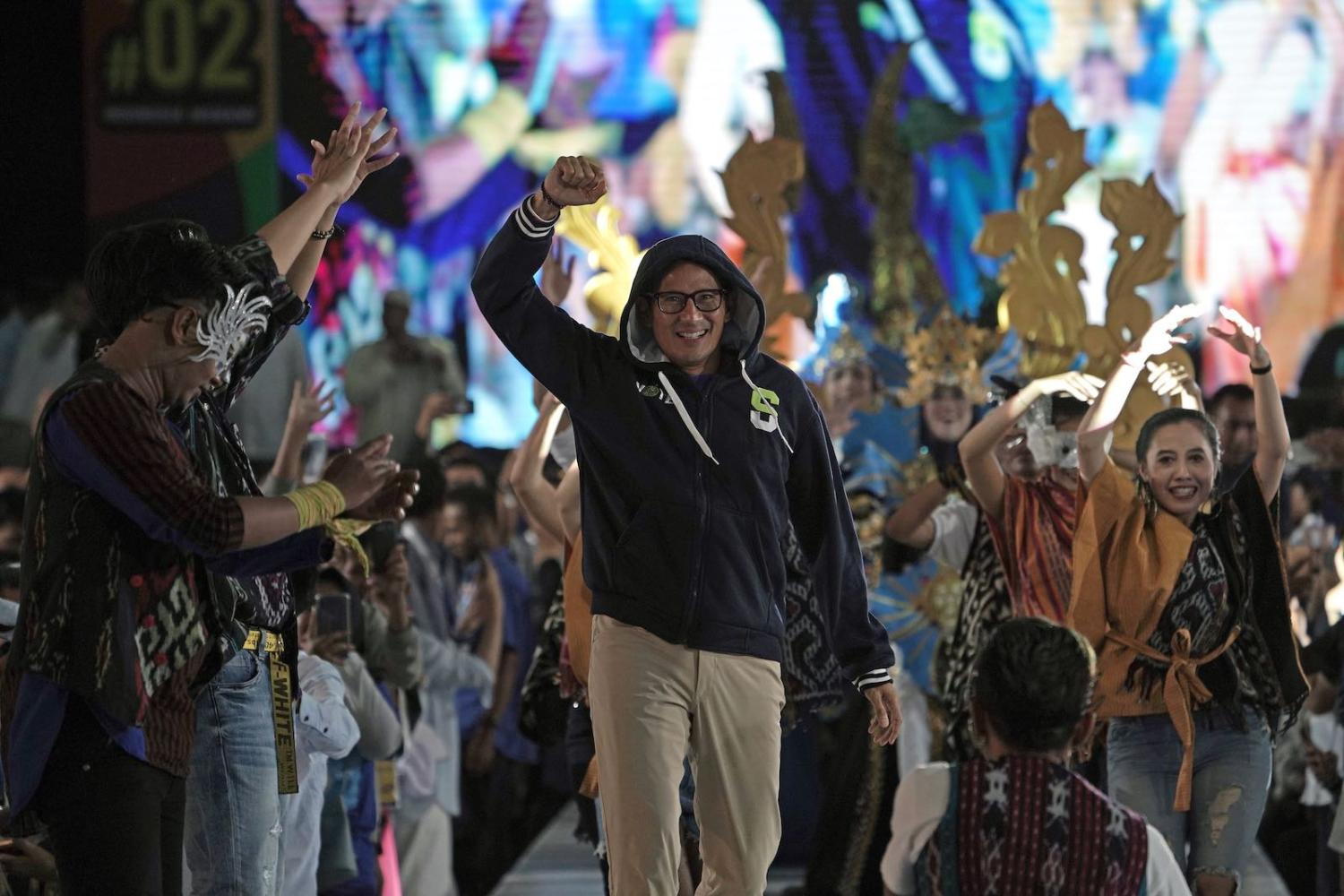 Sandiaga Uno has brought energy and a fair amount of his own cash and cache to the campaign (Photo: Dimas Ardian via Getty)
Published 16 Apr 2019     Follow @maxwalden_

As Indonesians go to the polls on Wednesday, questions have arisen around the business interests of the man who could be their next vice president.

The youngest among the presidential and vice-presidential candidates, charismatic political newcomer Sandiaga “Sandi” Uno has undoubtedly injected energy into a campaign that has otherwise been dull by Indonesian standards.

The 49-year-old only joined Prabowo Subianto’s Gerinda Party as an advisor in 2015. But a lack of political experience has been no hindrance, with Sandi becoming vice governor of Jakarta in 2017. This came after a controversial campaign that exploited nasty sectarianism to oust the previously popular ethnically Chinese and Christian governor Basuki “Ahok” Tjahaja Purnama.

Less than a year into his term as vice governor, Sandi was declared Prabowo’s pick for vice presidential candidate in the bid to unseat president Joko “Jokowi” Widodo.

It is widely believed Sandi edged out other candidates based on his ability to fund the Prabowo camp’s campaign. Forbes named Sandi as Indonesia’s 47th richest man in 2013, with an estimated net worth of US$460 million.

When selected as running mate, Sandi was accused of paying political “dowries” of around US$35 million each to the National Mandate Party (PAN) and Prosperous Justice Party (PKS), Gerindra’s coalition partners, in exchange for their endorsement. It has also been reported that Sandi claimed to have spent almost a whopping US$100 million of his personal wealth to fund the Prabowo-Sandi campaign, which Bloomberg speculated could be a “down payment on his own presidential ambitions”.

Sandi could hardly be described as somebody with humble beginnings. His petroleum engineer father Razif “Henk” Uno came from a noble family in Gorontalo, Sulawesi, while his mother is prominent Jakarta socialite Mien R. Uno.

Sandi was personally mentored by William Soeryadjaya, the owner of Indonesia’s largest conglomerate Astra International and a friend of his mother’s. Known as the “printer of rich people in Indonesia”, by some accounts Soeryadjaya paid for Sandi’s MBA at George Washington University in the early 1990s.

Sandi then worked in Singapore before returning to establish an investment firm known as Saratoga Capital in Indonesia in the late 1990s. “I built my business from zero and Indonesia has been so kind to me. Indonesia has provided me with unimaginable fortune and, for that, I need to pay back to my country,” he told the Straits Times last year.

Back in 2016, Sandi was named in the explosive Panama Papers as a client of Mossack Fonseca, the now-defunct shady Panamanian law firm shown to have created thousands of shell corporations for wealthy businesspeople around the world for the purpose of tax evasion and other illegal activities.

Sandi has denied evading taxes or breaking the law by establishing offshore companies with Mossack Fonseca.

But questions around his business dealings continue to swirl. The London-based NGO Global Witness recently linked Sandi to payments of at least US$43 million from a major Indonesian coal company to an obscure offshore firm and called on Sandi to provide a credible account of his actions. Meanwhile, a new Indonesian documentary entitled Sexy Killers documents the devastating impact of coalmines and coal-fired power plants on the health, homes and livelihoods of local communities across the archipelago. Several companies linked to Sandi feature prominently.

The documentary also makes clear Sandi’s willingness to do business with both sides of politics. In late 2018, Sandi sold assets from his company PT Saratoga Investama Sedaya worth more than Rp130 billion (US$9.2 million) to PT Toba Bara, owned by the Coordinating Minister for Maritime Affairs Luhut Panjaitan, a key figure in the Jokowi administration.

Luhut’s PT Toba Bara is a conglomerate with interests in natural resource extraction, electricity generation and agriculture. Initially serving as Jokowi’s chief of staff, a former four-star military general Luhut has long served as an important mentor for the president.

Sandi has been tipped by many as the Gerindra presidential candidate for 2024, likely to inherit a party which was originally created as Prabowo’s personal political vehicle.

Sandi also has business ties to Jokowi’s re-election campaign manager Erick Thohir, a media mogul and former owner of Italian football giants Inter Milan. The two cofounded the Angel-eQ Network, which was established to provide investment and support for local start-ups. Sandi was quoted by Indonesia’s news agency Antara last year as saying: “Erick and I have been best friends since we were kids”.

For some, such ties serve as another point of frustration with the history of oligarchic domination in Indonesian politics and the potential distorting influence on national priorities. The emergence of the so-called Golput movement is an example of an attempt to counter the grip of wealthy individuals on Indonesian democracy. Some of this is born of frustration – for instance, that despite international debate about the viability of coal in the era of climate change, Indonesia’s government continues to provide millions in subsidies to coal-fired powerplants.

Sandi has been tipped by many as the Gerindra presidential candidate for 2024, likely to inherit a party which was originally created as Prabowo’s personal political vehicle. It seems a fair assumption he will continue to do business with either side of politics.

“Want clean government? Want the price of electricity down? Choose Prabowo-Sandi,” declared Sandi in his concluding remarks of the final presidential debate on Saturday night.

Whether or not Indonesians do so, he looks to be this election’s big winner.

Previous Article
Australian media: missing in action on Bougainville
Next Article
The remarkable political influence of the Indian diaspora in the US

As PM, Rick Houenipwela can set the agenda but he can't personally implement every single policy.
Jamie Davidson 5 Jul 2017 11:56

Even if Trump’s toll road serves only the resort, in this specific instance it will not be running afoul of Indonesian law.
Greg Earl 22 Nov 2018 10:00