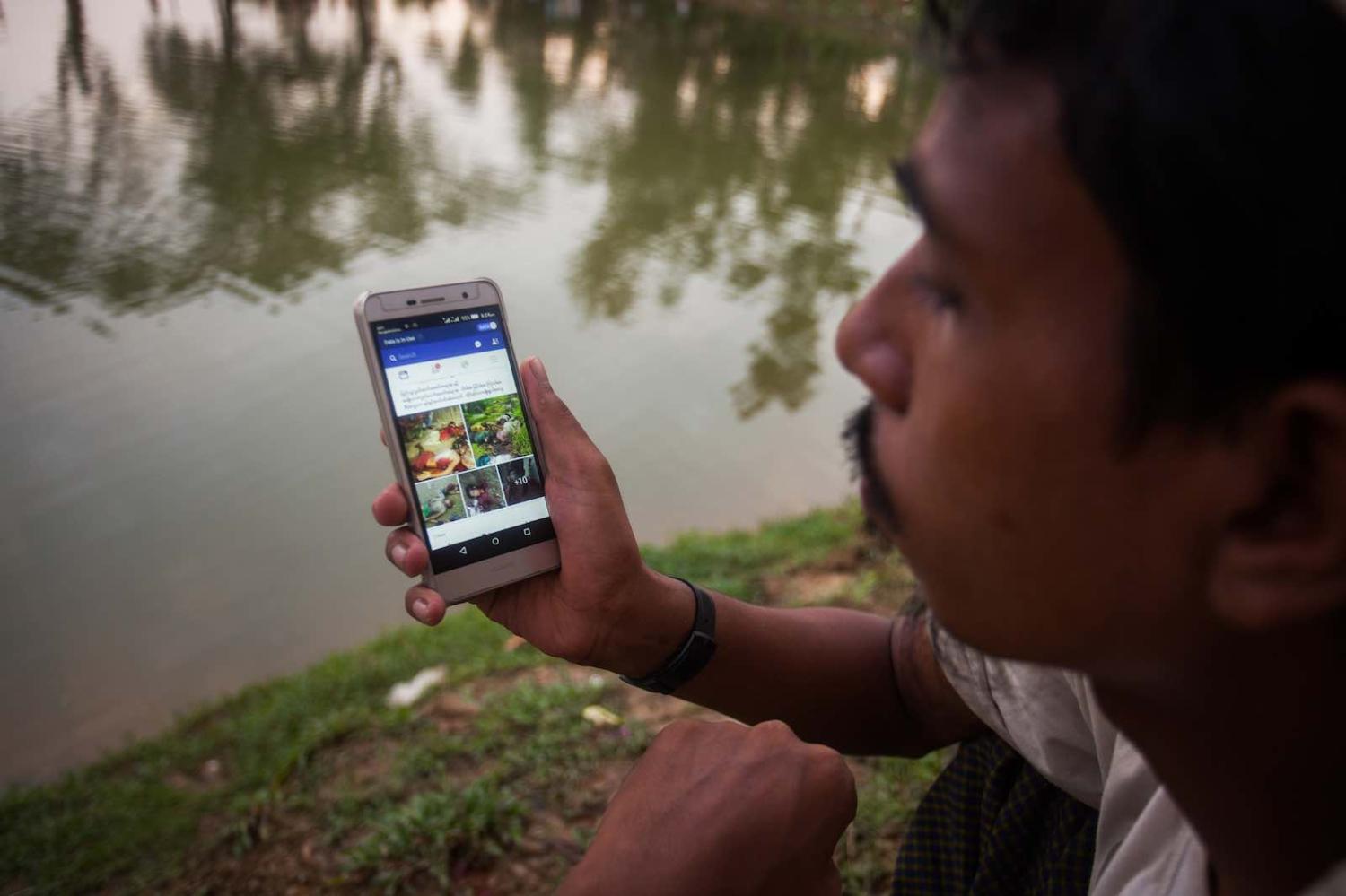 Restrictions were put in place to undermine purported Rohingya “criminal activities” but mobile technologies are a key tool for camp residents to protect themselves, too (Photo: Ahmed Salahuddin via Getty Images)
Published 21 Oct 2019     Follow @AdamJSimpson2

The role of social media, particularly Facebook, in facilitating hate speech and spreading disinformation in countries such as Myanmar has undermined assertions by Facebook CEO Mark Zuckerberg that his platform promotes “well-being”. Nevertheless, the United Nations has argued that internet access is a “key means” by which individuals can exercise their right to freedom of opinion and expression. This makes internet blackouts a significant human rights issue around the world and as the world becomes more connected, they are becoming more common. Not surprisingly, the Rohingya, Myanmar’s perpetually oppressed ethnic minority, are now facing internet restrictions on both sides of the Myanmar-Bangladesh border.

In June the Myanmar Ministry of Transport and Communications directed information and communications technology operators to disable internet services in nine townships in western Myanmar where the military are in conflict with the ethnic Rakhine Arakan Army. Although also containing Rakhine civilians, several of these townships were majority-Rohingya and have been sites for attacks on Rohingya civilians.

The explosion of mobile phone usage from 2014 provided another avenue for the dissemination of hate speech, particularly via Facebook, which is synonymous with the internet in Myanmar.

The blackout in these areas further exacerbates the difficulties facing aid agencies, the media, human rights monitors, and the civilian population in undertaking their legitimate activities. In early September the internet was restored in five of the townships, including the former Rohingya strongholds nearest the Bangladesh border, but the others remain in internet darkness.

At the same time as the internet was restored for some Rohingya in Myanmar, across the border the Bangladesh Telecommunication Regulatory Commission (BTRC) directed the shutdown of all 3G and 4G mobile services in the Rohingya refugee camps in Cox’s Bazar. Some 2G services still operate but are limited to text messaging and some calls. Furthermore, the BTRC directed all mobile phone carriers to stop selling SIM cards to Rohingyas to ensure that the refugees are not provided with mobile phone services.

The use of high-speed internet services is essential for being able to effectively manage the refugee camps, which have a combined total population of 1 million. In the contemporary world, such a logistical operation cannot be undertaken efficiently without access to this type of technology.

While lack of access to the internet and mobile connectivity can inhibit the right to freedom of opinion and expression, it can also undermine security. The restrictions were put in place to undermine purported Rohingya “criminal activities” but mobile technologies are a key tool for camp residents to protect themselves against such activities, whether they are carried out by Rohingya or Bangladeshi soldiers.

Access to affordable internet and mobile networks is relatively new in Myanmar itself, with mobile phone SIM cards still costing around US$2,000 in 2009 while under military rule. By August and September 2014, when the first foreign firms Telenor and Ooredoo started operations in the country, SIM cards were available for around US$1.50.

This shift accompanied a range of other significant political and economic reforms during the semi-civilian government of President Thein Sein between 2011 and 2016, which affected free speech, media and connectivity. When communal violence broke out in Rakhine State in 2012, with Rakhine civilians the primary perpetrators of violence against Rohingya and other Muslim minorities, stories, rumour and innuendo were largely disseminated by word of mouth.

In August 2012 the government repealed pre-censorship laws and, on 1 April 2013, the first privately-owned daily newspapers in half a century appeared on newsstands. A freed media is a welcome development in any society, but it also provided new opportunities for embryonic and largely unregulated media outlets to unleash chauvinist vitriol towards ethnic minorities, particularly the Rohingya.

The explosion of mobile phone usage from 2014 provided another avenue for the dissemination of hate speech, particularly via Facebook, which is synonymous with the internet in Myanmar. Following the ethnic cleansing of Rohingya in Rakhine State in 2017, the UN Independent International Fact-Finding Mission on Myanmar found Facebook to be a key player in creating an environment where “extremists’ discourse can thrive, human rights violations are legitimised, and incitement to discrimination and violence facilitated”.

As an influential and hugely profitable company, Facebook has a social responsibility to improve the quality of information it propagates, or else governments have an obligation to force it to. While some improvements have been made and its filters refined, its recent decision to continue allowing politicians to make false statements in paid advertisements has not helped its reputation.

Facebook’s efforts to improve filters in their Myanmar app have also been stymied by the poor uptake of its Unicode app, with Unicode the international text encoding standard. Most Facebook users in Myanmar continue to use the old app which employs Zawgyi text. The various updates that Facebook has delivered to the Unicode app therefore do not affect these groups.

Having faced international criticism over the Rohingya crisis, the current government, led by Aung San Suu Kyi, is now promoting migration to Unicode within the country, but the inertia is formidable since the apps are not interoperable.

Despite the role of Facebook and mobile connectivity in fomenting communal violence in Myanmar, long term internet blackouts are never justified. The internet restrictions faced by the Rohingya and other civilians on both sides of the border should be repealed.

Companies are finding themselves torn between conscience and keeping the lights on when it comes to Myanmar.
Kelsey Munro 27 Aug 2019 06:00

If we are now living in the age of networked disinformation, was the Philippines Patient Zero?
Nina Markovic Khaze 27 Jan 2022 11:00