Ruth Bader Ginsburg had a deep faith in America’s capacity for self-correction. Her absence puts it to the test. 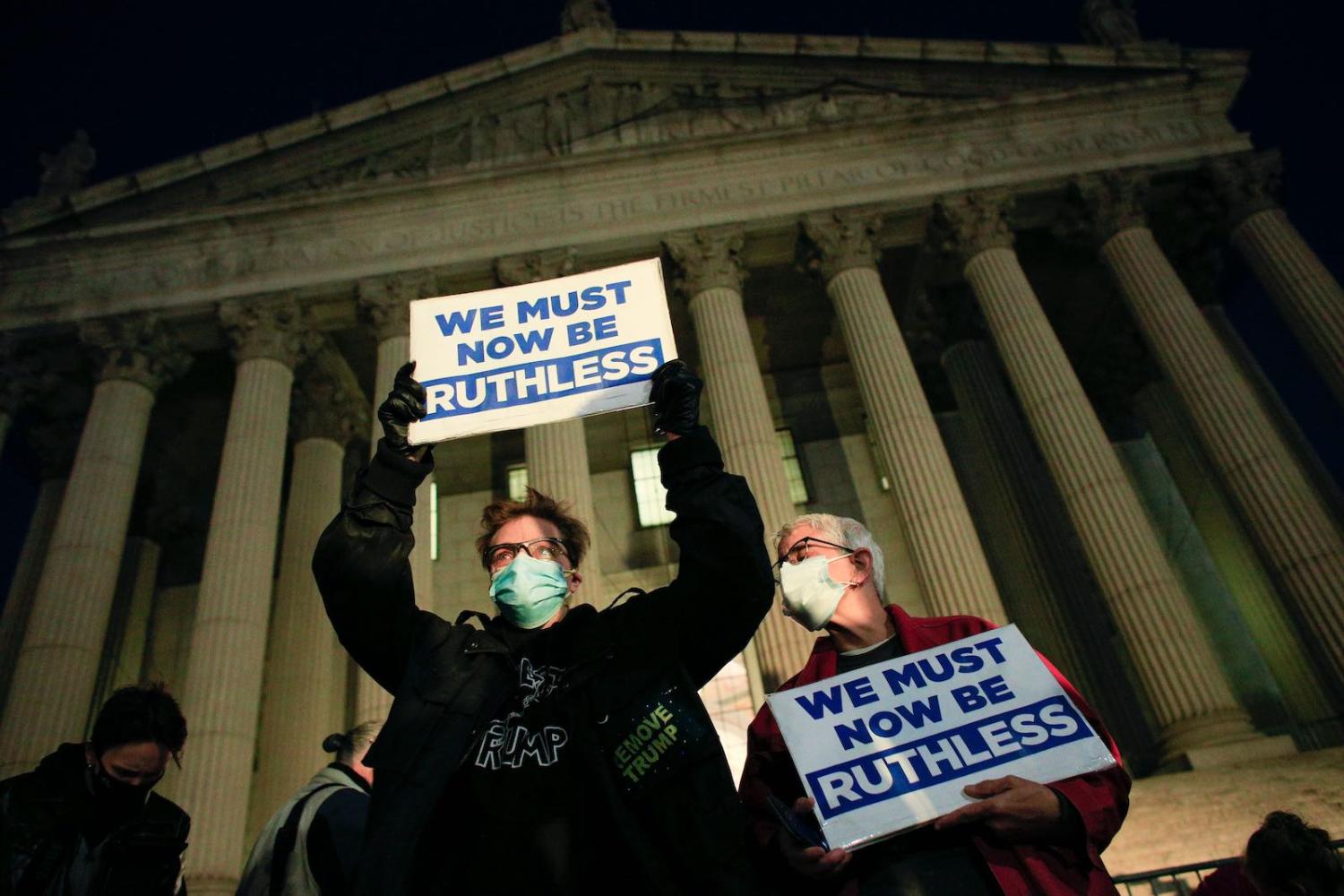 Supreme Court Justice Ruth Bader Ginsburg, who died last week at the age of 87, lived long enough to become a cultural icon. She was also someone frequently called upon to offer life advice, or more recently advice on repairing a system of government that feels irreparably broken. Shortly after the residential inauguration of Donald Trump in January 2017, Ginsburg acknowledged in an interview with the BBC that, “We are not experiencing the best of times,” but added, “I am optimistic in the long run. A great man once said that the true symbol of the United States is not the bald eagle. It is the pendulum. And when the pendulum swings too far in one direction it will go back.”

I would never deny the swampy aspects of Washington, DC, but the city is also home to thousands of mild-mannered public servants who possess a remarkable work ethic, an enthusiasm for the intricacies of democratic governance, and a sense of purpose that their work will matter for future generations.

Ginsburg modeled all of these qualities and demonstrated what can be accomplished with a brilliant mind and six decades of work. Her pendulum image encapsulates the version of American history that focuses on the capacity to self-correct, reinvent and emerge better. Ginsburg’s death forces a reckoning with the veracity of this story.

Approximately 90 minutes after the Supreme Court announced Ginsberg’s death last Friday evening, Senate Majority Leader Mitch McConnell announced that President Trump’s nominee would receive a vote in the Senate. McConnell waited about the same amount of time following the death of Justice Antonin Scalia in February 2016 to announce that President Barack Obama’s nominee would not receive a vote in the Senate.

The party that appeared absent when Obama couldn’t get the Senate to move on his nominee, and weak when Brett Kavanaugh was confirmed as a Justice in 2018, is ready for a fight.

Two Harvard University political scientists, Steven Levitsky and Daniel Ziblatt, singled out this 2016 decision by McConnell in their book How Democracies Die as indicative of the extent to which American “democracy’s soft guardrails were becoming dangerously unmoored”. McConnell and the Republican legislators who fell in lockstep behind him claimed that the Scalia vacancy occurred too close the 2016 election to permit confirmation of a new nominee.

A president had not been denied the opportunity to fill a Supreme Court vacancy when he nominated someone before the election of his successor for 147 years. The Senate’s move was a norm-busting expression of raw power, and yes, the Republicans stole the seat. But none of this was front and center in Americans’ political consciousness at time.

When President Trump’s nominee to replace Justice Scalia was confirmed in 2017, Democratic leaders, still reeling from losing to Trump, had barely picked themselves up off the floor. And rank-and-file Democrats, who are distinctly less invested in the courts than their Republican counterparts, seemed to accept that the seat held by the ultra-conservative Scalia would be filled by a Republican president.

Power, along with rank hypocrisy, is on display again, as McConnell plans a vote on Trump’s nominee less than two months ahead of the 2020 election. But the political landscape has changed dramatically. Democratic leaders are emboldened by the durability of Biden’s lead over Trump and the possibility of winning back the Senate. The party that appeared absent when Obama couldn’t get the Senate to move on his nominee, and weak when Brett Kavanaugh was confirmed as a Justice in 2018, is ready for a fight.

Further, the open seat on the court is now one that belonged to a liberal icon. Thousands of people over the past days have visited the steps of the Supreme Court. In addition to messages of gratitude, mourners are expressing a commitment to honor Ginsburg’s dying wish that her successor not be appointed “until a new president is installed”.

McConnell has two options for advancing Trump’s Supreme Court nominee: he can, in the 40-plus days leading up to the election, expedite a process that takes 70 days on average, or he can wait for the lame duck session after the election, which is also brief – a new Congress will be sworn in on 3 January 2021.

During President Trump’s impeachment trial in January this year, McConnell held his caucus together (with the exception of Mitt Romney and, to a lesser extent, Maine Senator Susan Collins) by creating the illusion of a fair process and providing Republican Senators with a way to justify their vote. But this year and this fight are different. First, there are a number of Republican Senators in tight races where Biden is predicted to win, and they may not be inclined to participate in a rushed confirmation process.

Second, if Justice Ginsburg is replaced by a conservative jurist, the potential for sweeping changes in legal protections is crystal clear. Although the justices appointed by conservative presidents held a 5-4 majority on the court prior to Ginsburg’s death, Chief Justice John Roberts moderated the impact of the majority by occasionally aligning with the more liberal justices and narrowing the scope of opinions.  A 6-3 majority would likely erase that moderation and pose a direct threat to abortion rights, gay rights, and the now popular Obama-era healthcare law.

McConnell’s strategy and the Democrats’ response will play out in the coming weeks and months. But more importantly, Americans will vote and determine whether Ginsburg’s pendulum is likely to teeter at one extreme or begin to swing back.