After recent disasters, policy changes shifted the model of humanitarian aid. The Covid crisis put it to the test. 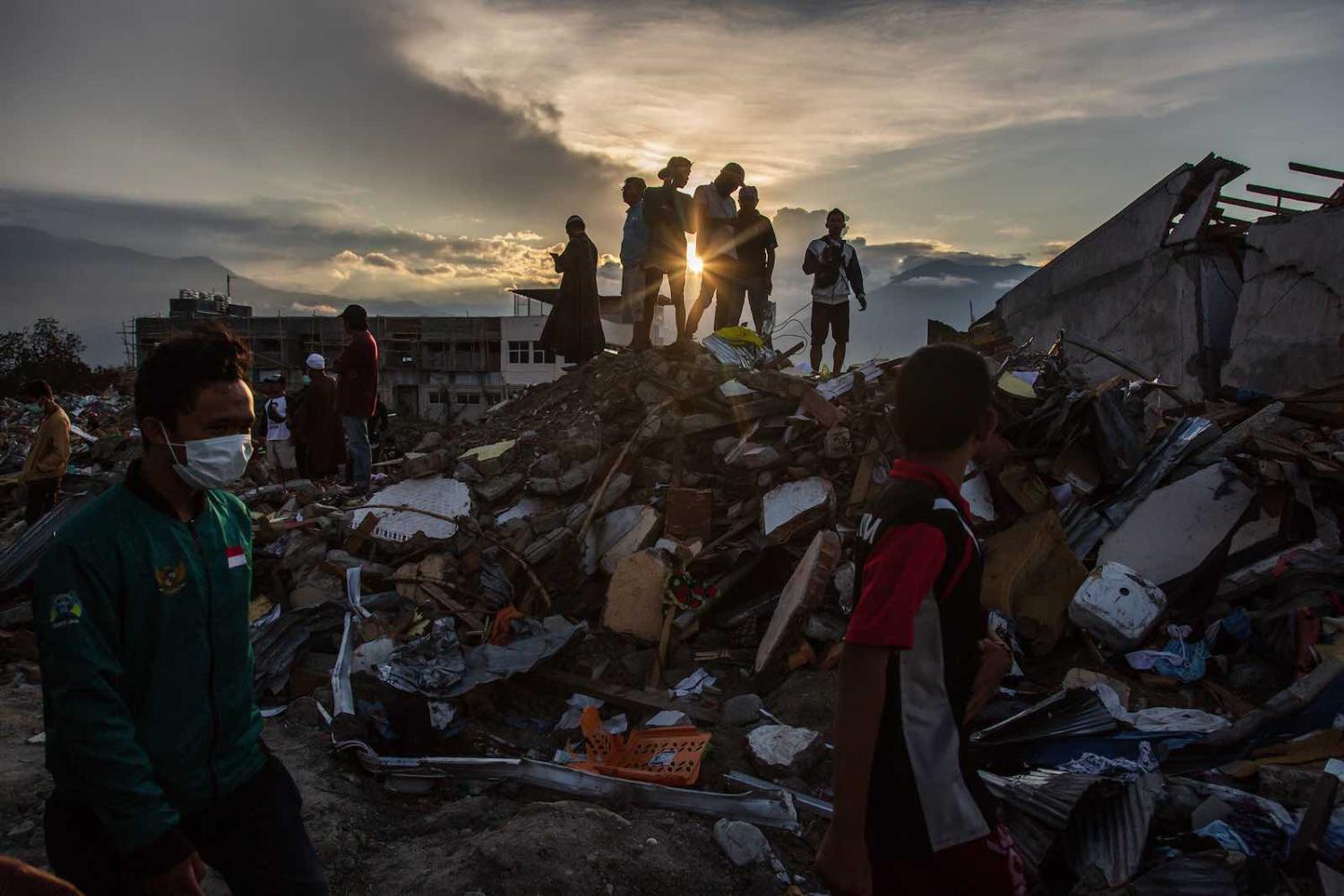 Aftermath of an earthquake and tsunami that struck the island of Sulawesi in September 2018, in Palu, Indonesia (Ulet Ifansasti/Getty Images)
Published 1 Jun 2020

Covid-19 and the significant changes it presents are forcing new ways of working, including for humanitarian responders. In Indonesia, the government response to the crisis has been criticised internally and internationally as slow and lacking transparency. Senior government figures downplayed the crisis in its early days, and agencies and the public struggled to get reliable information about the prevalence of the disease.

As the public has pushed for more action and information in order to better understand and respond to the unfolding emergency, civil society groups, particularly those well versed in disaster management and humanitarian response, have quickly taken action. The results have shown not only what is possible in the Indonesian context, but also pointed a way towards reform that the international humanitarian system has talked about for years but has never really seen materialise.

The 2016 World Humanitarian Summit (WHS), the first of its kind, identified many of the major challenges to the humanitarian system and how the global professional community could address them. One example is a focus on strengthening and empowering local leadership, rather than reinforcing the dominance of international humanitarian actors, including in coordination mechanisms, as well as closing the gap between traditional long-term development actors, peacebuilders and humanitarian responders.

SEJAJAR presents an opportunity for learning about local leadership at multiple levels, and how to improve collaboration between people within and outside the traditional humanitarian system.

Despite the best intentions of the reform agenda and a plethora of commitments, progress has been hampered by persistent bureaucratic barriers and a lack of evidence of change.

Recent research suggests that Indonesia is a prime candidate for testing an approach to country-led reform. Following the devastating earthquakes and tsunamis that struck Lombok and Central Sulawesi in 2018, the country took major steps to localise humanitarian response and to empower national actors to drive decision-making. This decision surprised many agencies, and forced adoption of the new ways of working promoted at the WHS in 2016.

While the localisation agenda has gained widespread recognition, in some countries it has been largely rhetoric. Indonesia’s policy compelled the necessary shift in power dynamics and the roles and responsibilities of humanitarian actors. In the Sulawesi relief effort, national organisations took the place of big international agencies, and civil society groups and first responders were given priority. Indonesia has also made progress in optimising humanitarian coordination, inviting national networks to join the UN-led Humanitarian Country Team, the main forum for coordination and strategy. Further, the government has formally adopted the cluster approach, which aims at improving planning and efficiency within specific areas of need, such as health, food, logistics or sanitation.

As the Covid-19 crisis unfolded in Indonesia, the groundwork laid by those developments helped enable a locally driven response and coordination effort. The Pujiono Centre for Disaster and Climate Risk Reduction Studies provides a clear example of effective local action. The Centre acted quickly to pivot its emerging coordination platform into a Covid-19 response network. From simple beginnings in early March, the SEJAJAR network-of-networks has grown to include 25 national networks across sectors, and nearly to 600 sub-national level organisations across 34 provinces, including Nusa Tenggara Timur, Central Sulawesi and West Papua.

SEJAJAR, an acronym of Sekretariat Jaringan-antar-Jaringan (OMS-LSM in Bahasa Indonesia), means equal in English, with the aim to reflect the equality among members of the network working together at all levels to curb the outbreak.

SEJAJAR provides a vehicle for collective engagement with government, a periodic webinar series to discuss critical issues and regular training opportunities for members, on subjects such as NGO business continuity and coping with financial crises in the face of Covid-19. In recent weeks, it has secured participation in the government-led National and Provincial Task Forces. Civil society groups have also been able to engage policy debates with ministers and senior officials on Covid-19 issues. SEJAJAR provides support for other networks, both within ASEAN and across the Asia-Pacific region.

Working in collaboration with OXFAM and the Muhammadiyah Disaster Management Centre, the initiative has from the outset intended to achieve a post-Covid Indonesia that has a strong civil society in equal partnership with government.

In a number of ways, the network provides a powerful example of progress in country-led reform:

Although still in its infancy, SEJAJAR presents an opportunity for learning about local leadership at multiple levels, and how to improve collaboration between people within and outside the traditional humanitarian system.

It also raises issues to explore further: How has the mechanism shifted power dynamics between stakeholders in Indonesia? What lessons can the provincial model be applied to global thinking around area-based coordination?

Understanding this initiative will equip stakeholders in Indonesia and elsewhere to improve a humanitarian system that is now, more than ever, in need of rapid and fundamental change.

When a pigeon’s supposed feat evokes a birdbrained response

A “biosecurity” threat to Australia’s strict quarantine system sends the nation all a flutter.
Georgi Engelbrecht 6 May 2020 06:00

A year after its creation, the autonomous region faces the threat of a pandemic, on top of lingering fractures.
John Cheong-Holdaway 18 Aug 2017 14:17